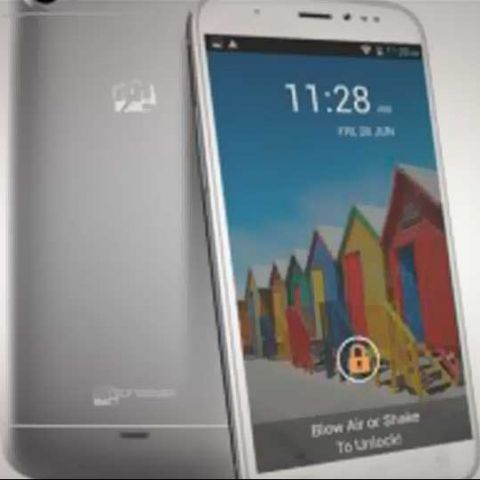 The overall build of the Canvas Doodle 2 is good and I am impressed with the aluminum back. In its performance however the device falls short. You will lose the stylus, as there is no way to keep it with the phone. There arenï¿½t any apps out there that exploit it as we have seen on the Galaxy Note series of devices from Samsung. If you want a large screen device for browsing the web, playing games and reading, you can consider this device. If pure performance is what you are looking for, then there are other devices out there for you to consider.

Micromax has made quite a name for itself with the launch of smartphones in a variety of price ranges. The budget smartphone maker has launched a series of successful devices such as the Canvas 2 A110, Canvas HD, and the recently launched Canvas 4. Now Micromax looks to take on the mid range large-screened smartphone market with the launch of the Canvas Doodle 2. The device has a large 5.7-inch display and shows off an impressive build. Is it worth the price of admission?

At a glance
The Canvas Doodle 2 has an aluminum build and you don’t have access to the battery or expandable storage. The display of the phablet is large at 5.7-inches and has a 1280x720 pixel resolution. It has 16GB built-in storage of which 13GB is available to the user. The rear of the phablet has a 12MP camera and the front has a 5MP shooter for video calling. The Doodle 2 has the MediaTek MT6589 chipset with the CPU clocked at 1.2GHz. You have Android 4.2 Jelly Bean straight out of the box.

Here is a quick look to see how the Canvas Doodle 2 compares to competing devices (including the Xolo Q1000S, WickedLeak Wammy Titan II, Lemon A4 and the Xolo Play T1000)

Design
You can be forgiven for thinking that this is a premium device thanks to the build the Canvas Doodle 2 has. The front is the same as any other Micromax smartphone with the standard three capacitive buttons housed below the display. The rear of the smartphone is a different story. Essentially, it’s divided into three parts - the top which houses the 12MP camera, the bottom which can be removed to access the SIM card slots and the middle which has an aluminum finish to it making it look really sturdy. You don’t have access to the battery of the phablet.

The rear has a matte finish to it and I really liked it. The rest of the port and button placement is fairly standard – power button on the right, volume rocker on the left, microUSB port at the bottom and the headphones jack up top.

The Doodle 2 also comes with a stylus but you won’t be using that for very long as there is no place on the phablet to house it.

Overall, Micromax has given the Canvas Doodle 2 A240 an impressive build quality. The device isn’t light at 220 grams nor is it the slimmest at 8.9mm in thickness but the package on offer is very attractive.

UI and preloaded apps
The Canvas Doodle 2 runs on Android 4.2.1 Jelly Bean. The interface is stock Android for the most part with a few Micromax specific UI elements and apps thrown into the mix.

M!Secure helps you backup your contacts, scans your phone for viruses and gives you warnings every time  you download an app.

As the name suggests, the Game Hub gives you access to games such as Barfi, Bubble shooter, Catch a Mouse and more.

M!Live gives you access to local Indian content such as ringtones, wallpapers and more. The M!Unlock app gives access to the blow or shake to unlock feature, one that was introduced with the Canvas 4.

Overall, the UI is stock Android, which I liked, and the preloaded apps add local content to the smartphone, something Micromax has introduced on all its Android smartphones. There is no bloatware on the phone and that is a good thing.

Performance
Coming to the performance of the Canvas Doodle 2, here is a quick look to see how it performs when compared to other smartphones in its price range.

From the above benchmarks it is clear that the Canvas Doodle 2 is an average performer. It hasn’t scored the best but it isn’t the worst either. We have seen devices such as the Lemon A4 that runs on the old MT6589 chipset and has a 1080p 5-inch display along with 1GB of RAM. With its hardware, the Lemon required more power to render on a Full HD display, hence the lower scores. On the other hand we have the Canvas 4 with a 5-inch 720p display with the MT6589 chipset. It scores almost at par with the Canvas Doodle 2. The Xolo Q1000S on the other hand has a 5-inch 720p display and is powered by the MT6589T chipset. It has more power under the hood and hence the best benchmark scores of the list.

Moving on, the display of the Canvas Doodle 2, at full brightness is quite vibrant. The 5.7-inch display has a pixel density of 258ppi, which isn’t great, but it isn’t bad by any standards. We saw the standard array of videos on the device ranging from MKV to MP4 and AVI. The videos were plagued with the same problem that we have with the MediaTek chipset. You have the MKV files where only the video runs and the audio isn’t recognized. Surprisingly, the native video player crashed when we ran AVI files on it and that’s a bummer.

The native video player is the same that we have seen on the Canvas 4. You can swipe up and down on the left to control the brightness and do the same on the right for the volume. You can also watch the videos in a small window on the display letting you use other apps while watching the video. Just like the Canvas 4, the canvas Doodle also boasts of the “Smart Pause” feature, which is that the video playing will pause once you look away. On the Canvas 4 this worked very well for me during the testing process. On the Doodle 2 however, it seems buggy. There were times when watching a video, it paused randomly. There were also times when I looked away and it took a second too long to pause making the feature feel rather gimmicky.

Sticking with the display, watching videos on it wasn’t as great a treat as I it was on other devices such as the Lemon A4, WickedLeak Wammy Passion Z Plus and the Canvas 4. The size of the display is good but the videos look a bit washed out.

Another problem I faced with the performance was that if I had too many apps running in the background, some of them heavy games, the device would crash randomly and wouldn’t perform well until I rebooted it. For the most part however, there was no lag when navigating the device.

The experience of interacting with the display feels good. The keyboard is stock Android and there is enough display real estate for you to have a comfortable typing experience.

Games such as Angry Birds, Temple Run 2 and more ran quite well with heavy games such as Dead trigger stuttering at times. Real Racing 3, as always, refused to run.

The camera on the rear of the Canvas Doodle 2 is 13MP and its performance can be described as average at best. In well-lit conditions, especially outdoors, the camera performed well. In low-lit situations, there was a lot of noise and loss of detail.

In terms of its battery life, the Canvas Doodle 2 is average. In our continuous video playback test, the device lasted for five hours. With average use you will be able to get through one day of use.

Bottom Line
The overall build of the Canvas Doodle 2 is good and I am impressed with the aluminum back. In its performance however the device falls short. You will lose the stylus, as there is no way to keep it with the phone. There aren’t any apps out there that exploit it as we have seen on the Galaxy Note series of devices from Samsung. If you want a large screen device for browsing the web, playing games and reading, you can consider this device. If pure performance is what you are looking for, then there are other devices out there for you to consider.