LG X Screen Review: When two displays are not enough The LG X Screen tries to be different from the pack, and even though it is, the lack of processing power, a sub-par camera and weakened battery life makes it inferior to fellow mid-range smartphones like the LeEco Le 2, Xiaomi Redmi Note 3, Moto G4 Plus and Honor 5C.

Of all the companies making smartphones today, LG is one of the more innovative companies around. Historically, LG has presented a number of interesting smartphones including the curved display G Flex 2, and the LG G5, the world’s first practically modular smartphone. Keeping in line with the same spirit, we have with us the LG X Screen. Alongside the standard, 4.93-inch IPS LCD display, the X Screen brings a secondary Always-On display.

This may not be entirely revolutionary, but it does two things: Notably increase the convenience of usage, and differentiate the smartphone from the huge pool of devices up for grabs in this price segment of the smartphone market. This is what you notice, within the first few moments of using the smartphone.

The dual-screen smartphone, however, may not make the cut simply by being different from the crowd. Allow us to explain more in the detailed review of the LG X Screen.

The Always-On display
So, the main feature. The Always On display on the LG X Screen is a 1.76-inch, 80x520-pixel panel that shows you Quick Access settings, notifications and recently used apps. When the main display is turned off, it even shows date, time, battery indication and icons for unread notifications, along with everything else. In essence, it works just like the Always On mode found in smartphones like Moto G4 Plus, LG G5 and Samsung Galaxy S7 Edge, only on a smaller, dedicated panel.

Does it really help? To begin with, the proximity sensor of the LG X Screen is placed directly above the secondary display of the phone, and you’ll often find it switching off as you are about to tap or swipe on it. This is somewhat inconvenient, and so is the fact that the narrow panel is not the most ideal for touch operation, particularly for those with fat fingers. 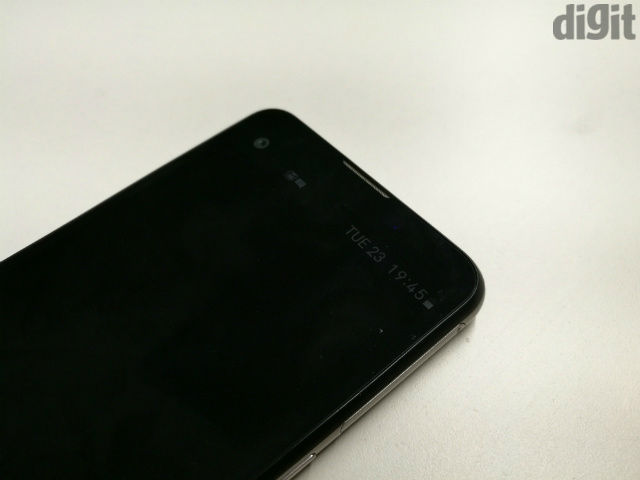 The options are indeed useful, but not majorly significant to be lauded. I would not really have missed it had it not been there, and use it simply because it is available. It is not majorly intuitive either, and the placement of the proximity sensor can get nearly annoying if you are trying to swipe to quick settings from time on the secondary display in the middle of your sleep.

While the LG X Screen is indeed one-of-a-kind in its own segment, it does not really strike you in terms of added convenience. That, to sum up, is as much as the secondary display works.

Build and Design
Understandably, the LG X Screen looks visibly different from the rest of the smartphones in this segment. The X Screen does not use a metal chassis, instead using fibre glass on the rear, and a plastic rim on the sides finished to look like smooth metal. The overall finish is quite smooth and seamless, but it does not really look premium. 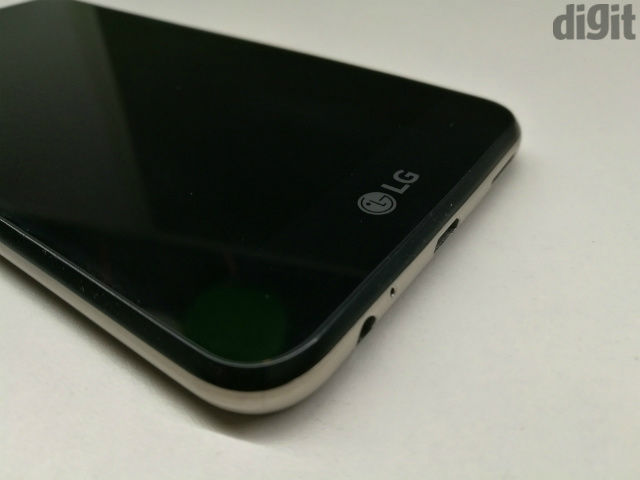 The phone lacks palm grip, but for a smartphone with dual-glass sides, the LG X Screen’s grip is not as compromised as you would expect. Another big disadvantage is that the LG X Screen ends up with too much of fingerprint, and you will constantly end up wiping it to keep it presentable. The 4.93-inch display is flanked by considerably large bezels, making the phone less compact than what it potentially could have. However, you can easily type with one hand, and at 118 grams, the LG X Screen is incredibly light. 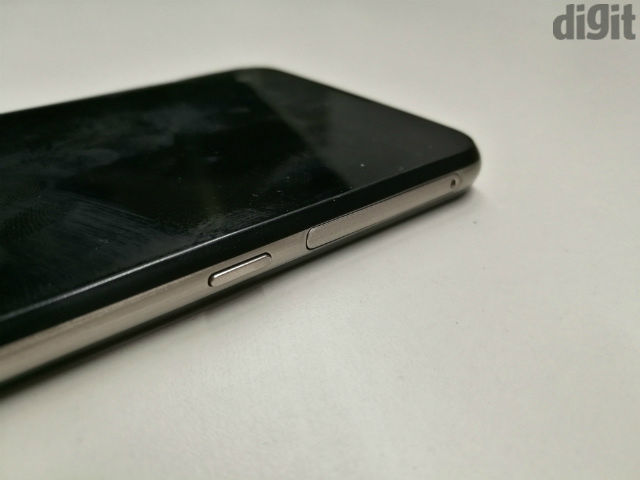 To sum up, the LG X Screen does look different from the industrial design that all manufacturers are adopting, but it does not create a lasting impression for you. Even in terms of build quality, the phone does not feel entirely reassuring. The LG X Screen does well with ergonomics, but that’s about it.

Display and UI
The 4.93-inch HD display is rather underwhelming, seeing that Full HD is the standard in this category now. Nevertheless, it does well with colours and viewing angles. The balance of colours on the display of the LG X Screen is vibrant, but not oversaturated. There is ample warmth in the colour balance of the LG X Screen, which makes the display pleasant to look at. We played a Full HD print of Alfonso Cuaron’s Gravity, and despite the screen having HD resolution, it suffices in terms of casual video watching. 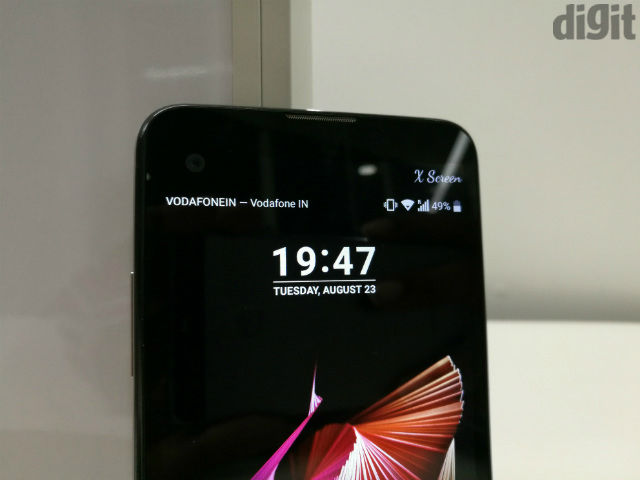 The amount of details is sacrificed, but is only noticeable if you minutely observe it. The LG X Screen runs on Android Marshmallow v6.0.1 with LG’s custom UI, which I did not really enjoy. There is a noticeable amount of lag on overall terms, and the customisation of icons and menus contribute to this. LG does not really present enough features to justify the customisation, either, and the UI feels more like an attempt to make it look different from others, than really aid usage. 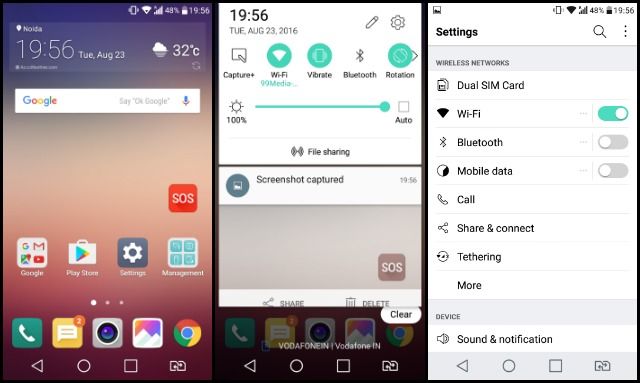 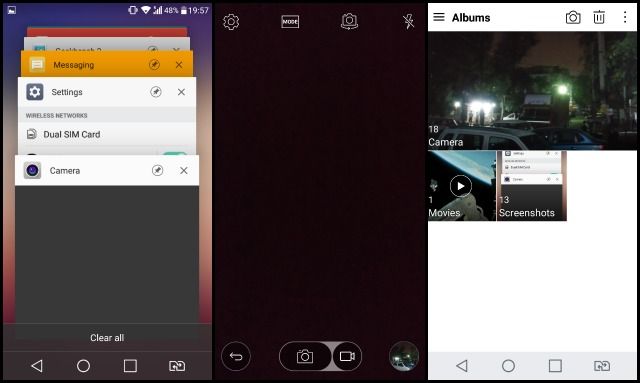 In comparison, the likes of Honor 5C, LeEco Le 2 and Moto G4 present better, cleaner interfaces than the LG X Screen. The touch response of the smartphone is not best-in-class either, and there are a number of missed swipes that you will encounter. The phone includes battery percentage display by default, and double tap to wake and sleep, which are small inclusions, but does contribute to the overall user experience of the smartphone.

Performance
It is here that the LG X Screen majorly disappoints. The LG X Screen runs on Qualcomm’s Snapdragon 410, which was unveiled three years ago. At this budget, you now get the likes of Xiaomi Redmi Note 3 with Qualcomm Snapdragon 650 SoC, Redmi 3s Prime with Snapdragon 430 and the likes, all of which are less expensive and snappier than the performance on offer here. 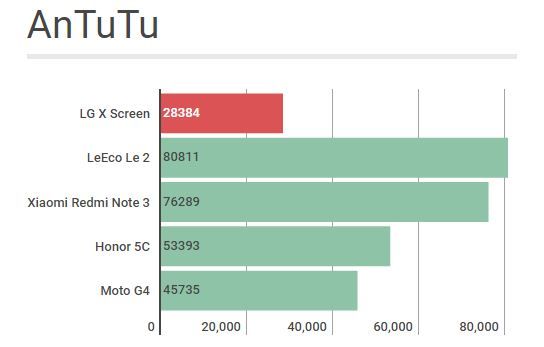 The LG X Screen also offers 2GB of RAM, which is not enough to keep overall performance smooth. For instance, browsing shows noticeable lags with three or more tabs open, which is quite disappointing. With Facebook, Email, Google Maps and Prisma open, the LG X Screen noticeably struggled to swiftly change between apps, or even reload the apps. Everything here, including browsing the menus seem sluggish, something that we do not often see in budget smartphones of today. 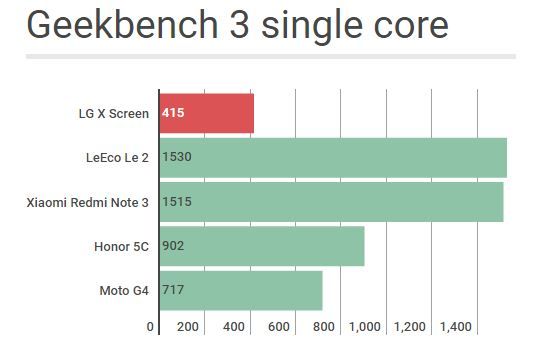 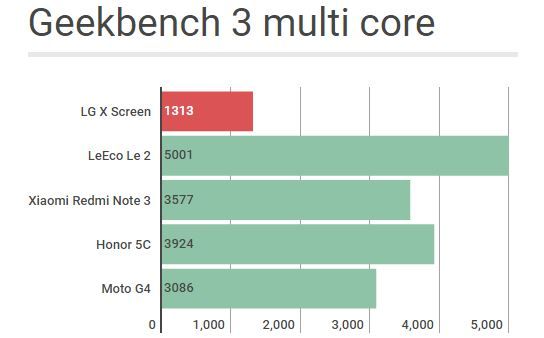 Gaming performance, meanwhile, is better than expectations. The LG X Screen renders Asphalt 8 and the likes more playable than the Helio P10-powered YU Yunicorn, but there are noticeable and significant lags within in-game navigation. The gameplay itself is playable, but there are frame stutters and noticeable stutters here. The display, despite rendering decent colours, does not do well with brightness, and the overall display is dimmer than optimum. Automatic brightness adjustment does not work well, either, and the touch performance of the LG X Screen also hinders the overall gaming experience. 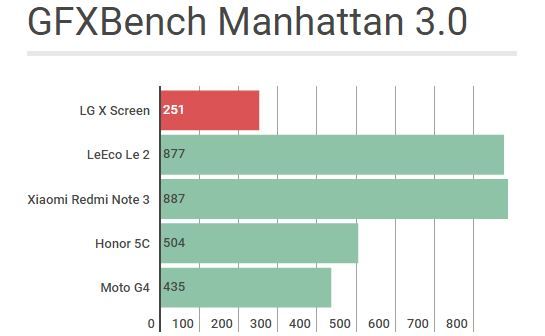 The LG X Screen does well with network reception, and there were no unnatural call drops. The earpiece audio, however, was not really impressive, and in noisy environments, I often struggled to hear everything clearly. The in-phone speaker, housed beside the microUSB port at the bottom, is standard, and there is nothing exceptional to write about here. 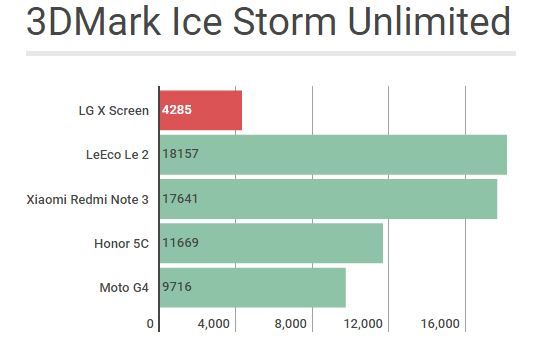 To sum up, the LG X Screen is one of the weaker smartphones in terms of overall performance, and is visibly outperformed by the likes of LeEco Le 2, Xiaomi Redmi Note 3, Honor 5C and Moto G4/G4 Plus. It does fare better than the YU Yunicorn, but that is little consolation.

Camera
The 13-megapixel CMOS sensor is paired with an f/2.2 lens, and on overall terms, is quite disappointing. Photographs shot in broad daylight look decent in terms of overall colour balance, but does not impress in terms of light distribution. There is also a distinct lack of details, and photographs render noise even in daylight.

The overall photograph quality keeps steadily deteriorating as you progress from outdoor to indoor and subsequently low light, as it starts rendering very noticeable noise, and colours lack accuracy and vibrancy. The camera app is simple, although like the rest of the performance of the phone, the app too lacks responsiveness and smoothness. The 8-megapixel front camera lacks details too, even in minimum softness. The overall imaging performance is disappointing, and there is no reason to recommend the LG X Screen over the likes of Moto G4 Plus and LeEco Le 2.

Battery Life
The LG X Screen fares rather poorly on Geekbench 3 battery benchmark test, and even in regular usage, it is nothing impressive. On a rather busy day with about 50 emails, nearly one hour of voice calling, extensive internet surfing, messaging, about 40 minutes of navigation and two hours of video and music streaming, the LG X Screen ran out of charge within nine hours. This is further compromised if you like mobile gaming.

The Always On display does save me from switching on my display repeatedly, but it does not seem to majorly impact battery life, at least with the 2300mAh battery-powered LG X Screen. The battery pack itself is rather small, and while the phone is indeed quite slim, I would have preferred a relatively thicker phone and better battery performance. The LG X Screen charges from 0% to 100% in about 54 minutes, which is fairly decent.

Bottomline
With all of these things taken into consideration, the LG X Screen is not one of the recommended smartphones in the present market. If you can spend about Rs. 12,990, the LeEco Le 2, Xiaomi Redmi Note 3, Honor 5C and even the Moto G4 are better performers than the LG X Screen. The LG X Screen is a novel concept, but the phone is too underpowered to stand up against the competition.