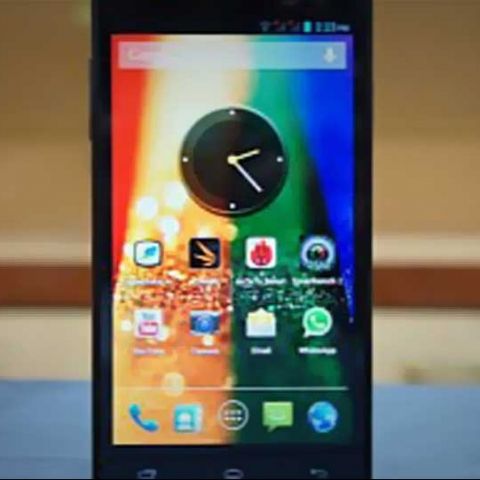 The Lava Iris 504Q has the price advantage as it is priced lower when compared to the Xolo Q1000, Spice Stellar Pinnacle Pro, and the Micromax Canvas HD. The Lava Iris 504Q is available today for Rs. 13,490. If you're looking for a large-screen Android smartphone under the Rs. 15,000 budget, you can consider this device.

One more addition to the quad-core budget race is the Lava Iris 504Q. Just like its brethren, it has specifications that we have already seen on many other devices. To distinguish itself, it brings some gesture features that you can use to control the camera go through the gallery and more. Is it enough to stand out from the quad-core budget crowd?

Features
For its specifications, the Lava Iris 504Q has a 5-inch display with a 1280x720 pixel resolution. The smartphone shows off a slim design and is fairly comfortable to hold and operate. Here is a quick look at how it compares to other budget quad-core smartphones in its price range.

As you can see from the table above the specifications of the smartphone are at par with the competition. The Spice Stellar Pinnacle Pro is the one that stands out with the highest built-in storage and the biggest battery.

Design & Usability
The Lava Iris 504Q runs on Android 4.2 Jelly Bean and there is no skin overlaying the OS. The touchscreen of the smartphone and the response is smooth, especially during typing and that is a very good thing.

The build of the Iris 504Q is quite good. The back has a slightly rubberized finish to it, which adds to the grip, but the finish isn’t as good when compared to the Xolo smartphones. This doesn’t mean that it’s bad. But there are better built devices available in the market.

Adding to the looks of the Iris 504Q smartphone is its 5-inch IPS display. The display is vibrant and sharp. It performs well for watching videos and reading text. The viewing angles on the smartphone are wide as well.

Overall, the Lava Iris 504Q is just like the other budget 5-inch quad-core smartphone in terms of its looks, design and usability. This isn’t a bad thing since all the other devices including the 504Q have established themselves as comfortable devices to use.

Gesture Controls
The unique thing about the Lava Iris 504Q is that it shows off gesture controls. Using the gesture control capabilities of the smartphone, you can perform actions such as clicking photos, changing tracks on the music player and video player, tuning FM channels and browsing the gallery on the smartphone.

When we used the gesture controls on the Iris 504Q, they worked, but felt quite gimmicky. It also took a heartbeat longer than we’d like when using the camera app to click pictures. Rather than waving your hand in front of the smartphone you can simply swipe your finger in front of the front facing camera to perform the action. This was not only easier to do, but was a lot more accurate as well, without any touch-induced shake.

The overall gesture capabilities of the Lava Iris 504Q are quite gimmicky and you won’t be using them for long.

From the benchmark scores it is clear that the performance of the Iris 504Q is at par when compared to what the competition has to offer. Benchmark performance however doesn’t translate into real world performance. Its overall performance in real world usage was smooth, and there were no real hiccups.

Games like Temple Run 2, Angry Birds Star Wars and Dead Trigger also ran on the Iris 504Q with ease. However, Real Racing 3 crashed every single time we tried to run it – a game that thus far in our experience has not run on the popular budget quad-core MediaTek MT6589 chipset.

The call quality of the Iris 504Q was good. The audio was clear at both ends but there were times when we faced a call drop. We think this has more to do with the network than the smartphone.

The 504Q did very well in our battery tests. It stayed alive for a little over five hours while playing a test video. We have seen smartphones last for up to 6 hours here. In the test, we ran an HD video on loop with the brightness and volume at maximum. It should last users a little over a day with moderate usage.

You can use the camera to click images to upload on social networking sites, but don’t expect it to replace your point and shoot.

Bottom Line
The gimmicky gesture controls aside, the Lava Iris 504Q falls in the category of your run-of-the-mill quad-core budget Android smartphone, powered by the MediaTek MT6589 chipset. You do have other smartphones in the same price range boasting of similar specifications, and your purchase decision can be based on which smartphone looks the best to you as their performance varies only marginally. It does have the price advantage as it is priced lower when compared to the Xolo Q1000, Spice Stellar Pinnacle Pro, and the Micromax A116 Canvas HD. The Lava Iris 504Q is available today for Rs. 13,490. If you’re looking for a large-screen Android smartphone under the Rs. 15,000 budget, you can consider this device.