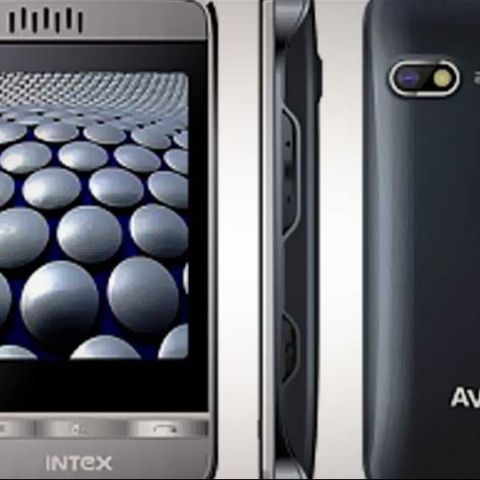 Apart from the fact that the Intex Avatar 3D gives great use for making calls, it isnï¿½t the best in its price range. The lack of a trackpad leaves you at the mercy of a resistive touchscreen that would have worked better with a stylus. As far as 3D is concerned, youï¿½ll be bored of it in under 5 minutes. If you are in the market for a dual SIM phone, we suggest you take a look at the options such as the Nokia Asha 200 for Rs. 4,300 (Approx,) or the Nokia C2-00 priced at Rs. 2,499.

The 3D revolution is one that has been pushed down our throat rather than a gradual acceptance. Now companies have started pushing 3D on small screen devices. HTC and LG have launched smartphones with glasses free 3D capabilities i.e. the HTC EVO 3D and the LG Optimus 3D. These smartphones however are premium priced and the 3D effects aren’t the best.

Today we have with us a budget phone from Intex that boasts of 3D effects with the help of traditional red and cyan colour separation glasses. Are the effects enough to give you a portable 3D experience or are you better off gunning for a simpler budget phone?

The device is called the Intex Avatar 3D phone but its branding has nothing to do with the James Cameron 2009 blockbuster. The phone has a pearl white plastic finish, and is quite well built for its Rs. 3,000 price point.

The display on the device is a 2.8-inch QVGA TFT resistive touchscreen display. All in all, the device has a nice look to it but it feels a little heavy in our hands. However, slap the phone on you hands a couple of time and you will feel something vibrate within – not a good sign.

Power on the device, insert your SIM card (or two since the device supports dual SIM) and you will be greeted with a home screen that says, “Slide to unlock”. Intex hasn’t even made the effort to make the text look different from an iPod Touch or an iPhone. The experience however is nothing when compared to the iPhone. A piece of advice – use your nails or a pen while using the touchscreen as its resistive nature makes it difficult to recognise your finger accurately. The interface on the phone is as good or as bad as you’d like depending on how well you can get used to the touchscreen.

Syncing you contacts is not that difficult as the device recognises .vcf files and you can transfer them to the phone through the bundled USB cable.

A good feature of the device is that it allows the “devanagari” script as an input meaning that you can type messages in Hindi as well. The down side it that the onscreen keyboard is a 3-letters-per-key style and you don’t get a full QWERTY or a landscape mode to type in. The Intex 3D Avatar phone is GPRS EDGE enabled and comes with built in apps for Facebook, Yahoo, Google and MSN. These apps are fairly basic but get the job done for checking and updating statuses. You can download additional apps from the inbuilt app store.

The device also has a built in music and video player. In terms of the audio playback, the audio from the inbuilt speaker is very loud and screechy as well, a little too screechy to use in public. The provided headphones aren’t anything to boast about either.

The Intex 3D Avatar phone comes with an inbuilt app called “King Movie”. This app contains the 10 bundled movies – Sarkar, Wanted, Karzz, Kites, Singh is King, Tum Bin and Welcome. All the movies are full-length films and not just trailers. The quality of the video was below average and the 2.8-inch display isn’t the best to watch movies on, even in landscape mode. The audio of the movies from the inbuilt speaker was loud but screechy at the high octave pitches.

Since the phone is “3D”, all these videos can be viewed in 3D. If you have any images on the device, they too can be viewed in 3D. The device comes bundled with a pair of very cheap 3D glasses and you shouldn’t be surprised if they break in a matter of seconds. They are red and cyan colour separation glasses and rather than giving you the feeling of depth perception that 3D is supposed to give, these do nothing more than add to a frustrating experience and may just end up giving you a headache. The 3D feels gimmicky and painful.

The device also comes preloaded with games. Angry Birds is called FBirds (Seriously! That’s what it’s called. Let your imagination run wild!) and a version of Fruit Ninja. If you are hoping to derive some sort of excitement from these games we suggest you use the tip of a pen, your nail or any pointy device, as the resistive touchscreen is torturing to say the least.

The device also has a bunch of other games such as Talk Tom, Hamster Fight, Pentachess, Across lite puzzle, Sudoku, Piano and Dog Star. The device also comes with an inbuilt e-book reader, Internet browser and a file manager.

Thankfully, the file manager is very easy to use. You just plug the phone into your computer and drag and drop the files in their respective folders and voila! You’re done.

Apart from attempting to be a wannabe smartphone, the device also does the basics like making calls and sending texts. As mentioned earlier, the device support devanagari which means you can send messages in Hindi as well.

As far as making calls are concerned, that the only task the device does extremely well. To add to “the Apple effect”, the in call menu is the same you’d find on the iPhone. The in call volume was very loud and clear. The audio at both the ends was well defined. Even when the signal strength was about half, there was clarity and no distortion.

In terms of the battery life, the device lasted us for about 2 days with a little above average use.

Apart from the fact that the device gives great use for making calls, it isn’t the best in its price range. The lack of a trackpad leaves you at the mercy of a resistive touchscreen that would have worked better with a stylus. As far as 3D is concerned, you’ll be bored of it in under 5 min. Its effects are outdated and the small screen doesn’t help either. Besides, the glasses are flimsy enough to break in a jiffy. If you are in the market for a dual SIM phone, we suggest you take a look at the Nokia Asha 200 for Rs. 4,300 (Approx,) or you can take a look at the Nokia C2-00, a simple dual SIM phone for Rs. 2,499 (approx.)