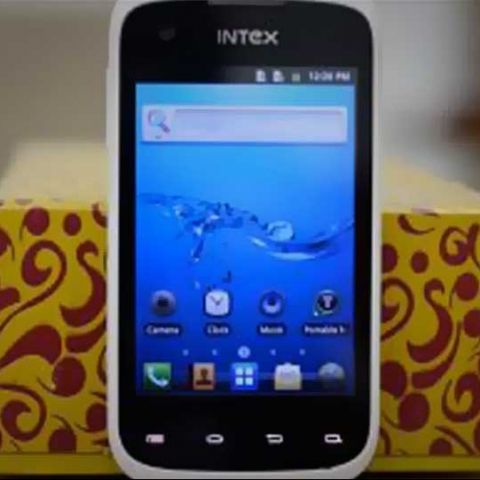 The Intex Aqua 4.0 is priced at Rs. 6,000, but still manages to deliver decent performance and get all the basics right, with dual-SIM as an added bonus. The battery life is fantastic and it runs most of the apps from the Play store. On the down side, it has a flimsy keyboard and sub-par multitasking capabilities.

There are numerous phones available around the Rs. 5,000 – Rs. 6,000. Called feature phones, the devices in this price bracket do offer good capabilities, even if they don't offer smartphone operating systems. The ones that do offer a smartphone OS however do fall short in certain regards.

We have seen the Android-based Samsung Galaxy Pocket and the Symbian-based Nokia Asha 300 perform quite well in this price bracket.

Today we have with us the Intex Aqua 4.0. The phone does boast of Android but don't be fooled by the 4.0 in its name. It runs on Android 2.3 Gingerbread.

Design and Build
On first impressions, the device seems to be very well built. It is a little heavy making it feel sturdy in ones hand’s. On the face, the Intex Aqua 4.0 has a 3.5-inch display with a resolution of 480x320, which is standard for the smartphones in this price range. Below the touchscreen you have the standard array of capacitive buttons – menu, home, back and search. A lot of smartphones today have gotten rid of the search button and it’s nice to see it make an appearance here.

In terms of its connectivity options, the Intex Aqua 4.0 has the microUSB port on the left side as opposed to the bottom. The left of the device also houses the volume rocker. The top of the budget smartphone has the on/off/sleep/wake button along with the 3.5mm headphones jack. The rear has the 3MP camera without a flash and the front has a 0.3MP camera for video chat.

The design of the Intex Aqua 4.0 may be your run of the mill average Android phone but the build is something we are really happy with. It feels extremely well built and not at all plasticky. The rear panel has a textured finish to it adding to the grip. The colour of the smartphone is white which is elegant but it also means that the device will get quite dirty quite fast. The saving grace is that the Intex Aqua 4.0’s finish is matte and not glossy.

Features and Specifications
Under the hood, the Intex Aqua 4.0 is powered by an 800MHz processor and has a mere 156MB of RAM. It also has a mere 174MB built-in storage, which can be expanded to 32GB via a microSD card. Straight out of the box, the device runs Android 2.3 Gingerbread and there is no upgrade to the latest Android OS, 4.0 ICS. The OS gives you the option of five customizable home screens and you have the standard slew of widgets and apps to flood them with. One of the biggest USP’s of the phone is that it supports dual-SIM.

The lock screen of the Intex Aqua 4.0 is a simple drag to unlock and all the features are stock Android. The device doesn't seem to be skinned.

The Intex Aqua 4.0’s rear 3MP camera clicks average quality images, and there’s nothing to boast about here. If there is no memory card in the device, it won’t click pictures, so be warned. The quality of images from the camera isn’t great, so don't expect to be replacing your point and shoot. There is also no dedicated shutter button on the device.

For a phone that costs Rs. 6,000 you can’t expect more in terms of features than what is provided. The phone has no skin, making its interface quite smooth and dual-SIM means you can get rid of that second phone. One flaw that we must mention is that WhatsApp isn’t compatible with the device. Since the app is more of a necessity in today’s world than anything else, its lack is quite a bummer.

Performance
The performance of the budget smartphone is quite acceptable considering the price you pay for it. In the benchmark comparisons, its scores weren’t great but they were acceptable. The Micromax A50 Ninja smartphone did score better in terms of graphical performance but in other benchmarks the Intex Aqua 4.0 scored better. The Intex Aqua 4.0 also scored better than the Samsung Galaxy Pocket that falls under the same price bracket. You can see the benchmark graphs below.

The display on the Intex Aqua 4.0 is quite good. Sure it doesn't have a stellar resolution at just 480x320 but it gets the job done. It is quite vibrant, but faces the usual problem of glare under direct sunlight.

The call quality of the Intex Aqua 4.0 is good as well. The voice is clear at both ends and the basic job of calls is handled quite well. You can also perform Skype calls from the device.

One of the disappointing aspects of the Intex Aqua 4.0 is the keyboard. It is slightly uncomfortable to type on especially the keys that are at the corner, close to the edge of the display.

In terms of the preloaded apps, the device comes with Flipkart and IRCTC along with Nimbuzz and Skype. Apart from that you have access to the Google Play store for your app needs.

Despite the average budget 800MHz processor, apps seem to run quite well on the device. We played a few games like Angry Birds Space and more and even though at times the device took its own sweet time to load, the apps ran smoothly.

Videos via the YouTube app ran quite smoothly. The viewing angles are nice but the audio output from the speakers was underwhelming.

Another flaw in the device is that its Wi-Fi connection seemed to drop a few times. Restarting it however solved the problem.

The best feature of the Intex Aqua 4.0 has to be its battery life. To check mail, some social networking, calls and messages, the device lasted us a whopping three days and that is very good.

Bottom Line
For a phone that is priced at the Rs. 6,000 price point, the Intex Aqua 4.0 offers decent performance and build quality, getting all the basics right with dual-SIM as an added bonus. The battery life is fantastic and it runs most of the apps from the Play store. On the down side, it has a flimsy keyboard and sub-par multitasking capabilities. If a device with an Android OS is what you want then you can consider this, along with the Samsung Galaxy Pocket and the Micromax A50 Ninja. But if the OS doesn't matter, we suggest you take a look at the Nokia Asha 300. It has a 1GHz processor and a touchscreen along with a keypad.