The InFocus M530 delivers amazing performance and a brilliant camera, even a pretty heavy duty battery. Everything from regular work to gaming with simultaneous music playback is a breeze. However, the phone is too big, and the display lacks crisp colours. But for Rs. 10,999, this is one of the best phones you can get!

InFocus is one of the latest entrants in the Indian smartphone market, and have been selling their products pretty well. At the launch of their two new phones, InFocus claimed that the M530 is a pretty strong performer - strong enough to take on more expensive phones from more established brands. Once I started using it, I came to know why they made such a bold claim.

The InFocus M530 is a delight to use for a sub 15k smartphone. It never lagged, no matter what I threw at it. I could play Asphalt 8 with in-game audio muted and AC/DC streaming in the background, and the performance was impeccable (except for the expected heating and battery drop). Such performance, for a device priced just above the 10k mark, is downright amazing. Here's taking an in-depth look at the InFocus M530.

Build and Design
It's a pity that the InFocus M530 doesn't really strike you as a standout phone on first look. As much as I will say that the overall performance and camera quality of the device make it brilliant, looks do matter. Unfortunately, the InFocus M530 didn't impress me at all. To begin with, it's too big. The large screen has broad bezels all around, the metal rim around its sides is rather thick, and overall, it felt quite heavy. This is certainly not a device that you would fancy using with one hand, and unless you have larger palms, you most certainly won't be able to. 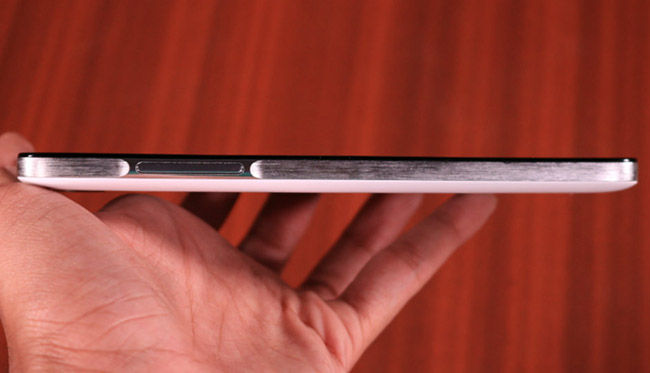 The InFocus M530 is certainly not a winner by looks. Although the build is quite sturdy and the phone feels like a few harsh falls won't really bother it, the overall size really hinders usage. Keep it in your pocket, and you will often be reminded that you are carrying a very large phone around. One good aspect, though, are the volume and power buttons. They do not feel flimsy at all, and are recessed smoothly into the main frame of the phone. For a phone of such dimensions, InFocus actually does well to not make it feel extremely heavy. It is, however, considerably heavier than most other phones in its segment. 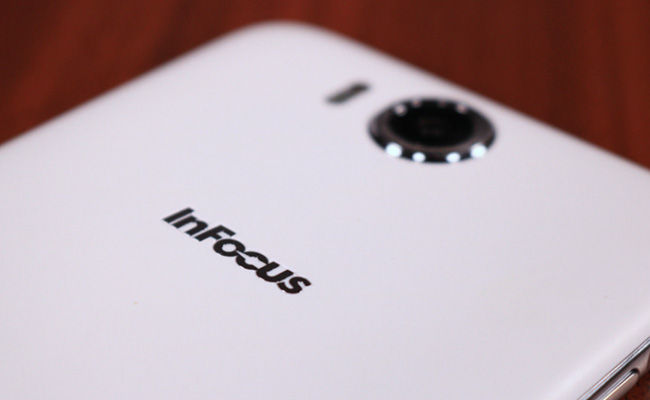 The front is entirely glass, and the back has matte plastic. The primary camera with the LED flash, the InFocus logo and the speaker are all on the back. The lack of a sense of impressive design in the InFocus M530 has resulted in the phone looking very simple (read: too simple). Looking at the back, I got the vibe of a phone that doesn't try to attract buyers simply based on looks, and while that somewhat holds true, it relies too much on its performing capabilities. If you're a buyer happening to scroll through phones online without reading specifications and reviews, chances are high that you will look past the InFocus M530 without giving much thought.

Display and UI
Switching it on, the InFocus M530 seemed to feature a display with fairly accurate colours. The large 5.5-inch 720p display, however, lacks sharpness when compared to other phones in its budget like the Xiaomi Mi 4i, and its colours lack the gamma factor. Even at the highest brightness level, there's nothing much to like about this display. Visibility under direct sunlight is decent. However, you will not really enjoy watching movies on it. There's an overall low-contrast bleach in the display, and coupled with the rather unimpressive design, it really doesn't help create an impression on a buyer. 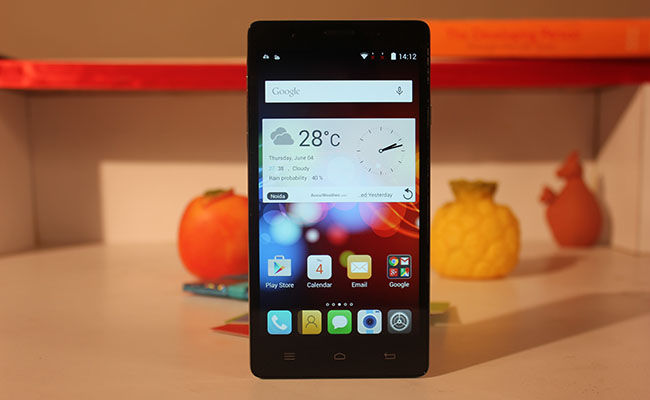 We transferred a few photos taken with the InFocus M530's camera to a Xiaomi Mi 4, and they looked stunning on it. Viewing them on the M530, you may be forgiven if you think that the camera isn't really good enough, whereas in actuality it is really good. Additionally, InFocus has loaded its own InLife UI on Android v4.4.2, that comes pre-loaded on the phone, which looks too simplistic, and somewhat outdated. Right from the notification panel to the application view, the overall feel of the UI is really dampened by its lacklustre appearance. Just like the entire design of the device, it is really simple, and even easy to use. Instead of a drop-down panel of one-touch icons to control phone settings, the icons are arranged in a horizontal-scroll timeline format right on top of the device (very like the old Samsung Galaxy S4) when you drop down the notifications panel. 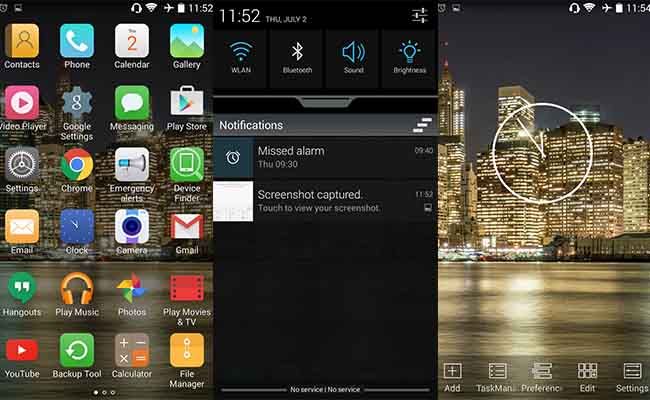 Except for the simplicity, there is really nothing good to point out about the display and interface of the InFocus M530. Devices like the Cyanogen-driven Yu Yuphoria and Xiaomi's Redmi 2 (featuring Xiaomi's MiUI) look much better and smoother at even cheaper price points. While touch feedback is fast enough, there were a few missed taps and swipes every now and then, which really didn't leave any room for me to find good things about the display. 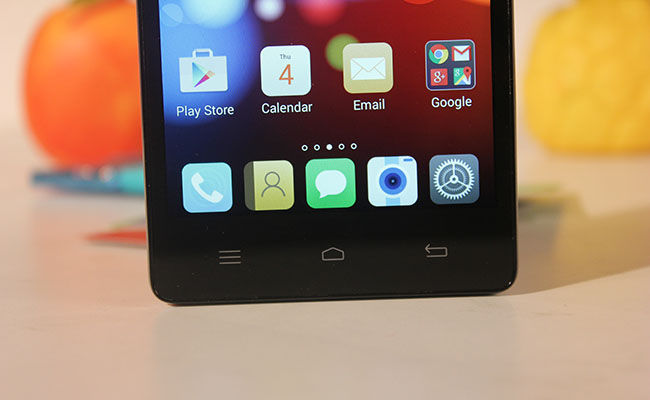 Performance
It is here that the InFocus M530 shoots far ahead of its competitors. It is powered by MediaTek's MT6595 octa-core SoC clocked at 2GHz, along with 2GB of RAM. While a lot of phones remain powerful performers only till the spec sheets, the InFocus M530 really delivers excellent performance. You can, for instance, stream music while writing an email and keep updating apps in the background, and be surprised at how fast this phone works.

Call performance is excellent. The in-call audio clarity is good, and signal reception also seemed stable. Light internet-based tasks such as browsing through Facebook and Twitter timelines, viewing and uploading photos and general searches are as smooth as it can get. While running heavy games like Real Racing 3 and Call of Duty Heroes, there was no glitch in gameplay and controls. However, the uninspiring colours on the display will somewhat bring down your joy of gaming.

The battery power is nicely optimised with the performance, and long spans of gaming does not drain the M530 too fast. Spontaneously clicking photos, editing on Adobe Photoshop Express and uploading on Instagram did not have any lag time in between the processes, and the effects applied took almost no time to save to device as new image. There were times when I wished InFocus had made the phone smaller, so that using the phone was easier.

The audio quality is no great winner on the InFocus M530. While the external speakers are loud enough, the audio quality is somewhat sub-par. Voice pitch falls on the shriller end, and baritone timber is severely compensated. You need to plug in a pair of good earphones to actually get decent sound out of the InFocus M530, that too after tweaking the equaliser. Video playback, buffering and music streaming all run very smoothly. In short, nothing to complain about here. In fact, it set the highest score for a number of benchmark tests for phones in its budget segment.

Battery
The InFocus M530 packs a 3100mAh battery, and provides good battery performance for its price. Our battery tests revealed 8.3 hours of battery life. An hour of continuously playing Real Racing 3 saw a 12% battery drop. Overlooking the heat that you would expect from continued heavy usage, there was no stutter in performance. On a regular day’s usage comprising light gaming, calls, messages, internet surfing and occasional usage of maps and navigation, you can expect the M530 to last you one full day. Even at the end of the day, I had about 12-15% charge left - good battery life for an 11k phone.

Camera
This is the best part of the InFocus M530 - the camera quality. Even if you would find phones that would offer you reasonably seamless performance in the sub-15k price category, the InFocus M530’s camera can take really amazing photographs, especially when you’re spending just Rs. 10,999. The 13-megapixel Sony IMX214 Exmor-RS CMOS sensor (same as the Xiaomi Mi 4i) features Optical Image Stabilisation (OIS) and High Dynamic Range (HDR) mode, which makes this the most equipped and powerful camera in this price range. The photographs have a highly detailed image composition, colour reproduction is stellar, and warm and cool tones are nicely balanced. Although the shutter did seem a little slow, the image quality compensates for that. At times, though, it seemed surprisingly slow in HDR mode, especially for such a fast phone. Apart from that, this camera is a stunner, and by far the best camera in its segment and above.

Video recording on this camera is fast, and of good quality. Though the rest of the aspects about M530’s camera feels rather standard after the excellent rear camera’s photography quality, the videos are quite good. There is no stutter or pixelation, and the only thing that I didn’t like is the slightly warmish tinge it would produce even against blue colours. The front features a 13-megapixel camera too, and needless to say, it is quite good. For a phone that costs just Rs. 10,999, the quality is exceptional, even in low light conditions. Maybe the only qualm you might have is that the images appear slightly dull on the InFocus M530’s display. Transfer it to a cellphone with better display or your laptop, and you will notice the amazing detailing.

Bottomline
I really wish the InFocus M530 was slimmer, and had a crisper display. There’s not a single flaw with its performance and the camera is absolutely amazing. Even the battery provides ample backup. Everything from regular work to gaming with simultaneous music playback is a breeze. Everything taken into account, for Rs. 10,999, this is one of the best phones - if not, the best phone that you can get now.