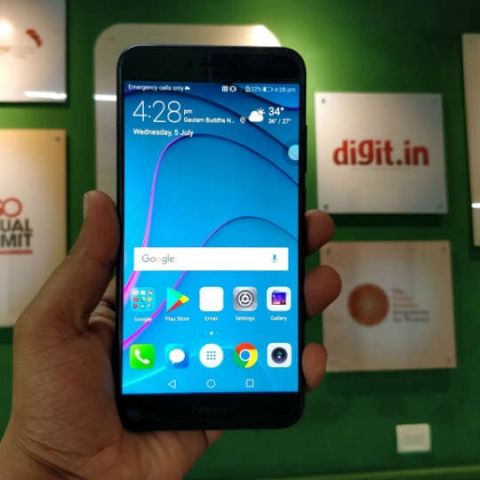 Overall the Honor 8 Pro is a good device for what it offers. The build and design of the phone is fantastic and everyday work happens very smoothly on the device. There isn’t a game or app that didn’t perform on the phone. The battery life is decent. If there is a downside, it’s the viewing angles and overall brightness of the display. The camera performs well in well-lit situations, but falls short in light photography.

The story for every great hero starts with a villain. The more intriguing, dangerous and exciting the villain, the more thrilling is the journey of the hero and his success. In the story of flagship smartphones, OnePlus emerged as the brand that gives birth to flagship killers. With the OnePlus 5 however, the price of the flagship killer has risen. At Rs 32,999, the 6GB OnePlus 5 is a great deal, but the success of OnePlus has put another company in an attractive position – that of being a OnePlus killer. We are talking about the Honor 8 Pro. On paper, it brings with it almost every spec and function to take on the OnePlus 5. Will the emergence of a new hero retire the old one?

The Honor 8 Pro review unit we received is Navy Blue in colour and it makes the smartphone very attractive and appealing. Kept idle on a table, the device will definitely turn heads. Just like flagships of today the smartphone has an all metal body.

On the front, the smartphone has a 5.7-inch display with a 2.5D curved glass and Corning Gorilla Glass 3 protection. There are no physical buttons below the display keeping the back, home and multitasking buttons on-screen. Above the display, we have the earpiece and the front-facing camera. The bezels on the side of the display are quite thin and the Navy Blue colour just makes the phone pop. At the bottom of the device, you have the USB-C port, headphones jack, and the speaker grill. On the left, we have the Dual-SIM tray and the second SIM slot doubles up as a hybrid SIM slot. On the right, we have the volume rocker and the power button.

Coming to the rear of the Honor 8 Pro, the smartphone has a smooth metal back. It makes the phone slippery, but not as slippery as the Galaxy S8 which has a glass back. The fingerprint sensor rests at the back and is very conveniently located. The one place where the Honor 8 Pro gets more marks than the OnePlus 5 is how well they have fit the dual camera setup on the smartphone. There is no bulge and the two cameras merge seamlessly with the design of the smartphone. The only question that comes to mind here is why are the words “Dual Camera” written next to the two cameras? In the past, this is where Huawei has put the Leica branding when their smartphones boast of dual-Leica lenses. So just stating the obvious next to the lenses seems a bit odd. 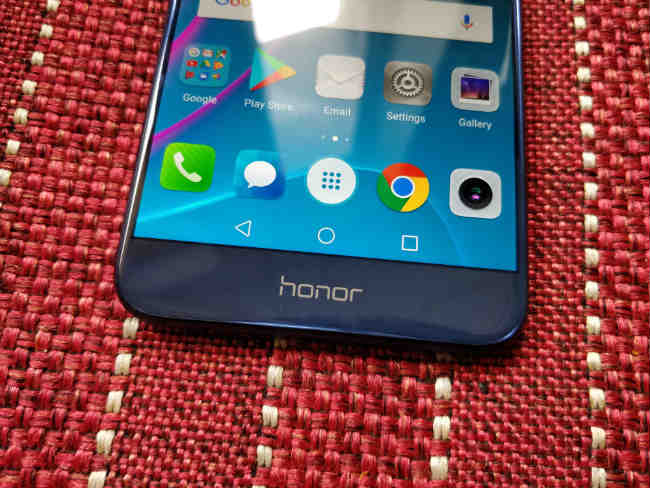 Currently, among all the flagship smartphones available out there, the Samsung Galaxy S8 takes the prize of being the best-looking smartphone out there. The Honor 8 Pro doesn’t beat it, but proves that an all metal design mixed with some sexy colours can make for a very attractive proposition. Compared with the OnePlus 5, it’s definitely the sexier of the two. 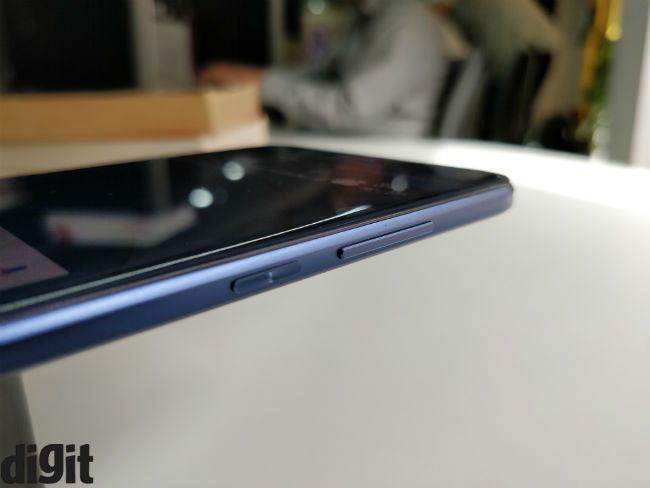 5.7-inch 1440p IPS display: is resolution the only thing that matters?

Coming to the display of the Honor 8 Pro, like we mentioned, it has a 5.7-inch LTPS IPS LCD display with a 2560x1440p resolution. In our test, the display clocks a maximum of 458 lux brightness. To put things into perspective the OnePlus 5’s 1080p Optic AMOLED display has a maximum brightness of 750 lux. When it comes to real world performance however, the display of the Honor 8 Pro worked fine in indoor, outdoor, and dim-lit situations. The auto-brightness adapts well and the screen is very visible outdoors, on a fine July afternoon in the Noida heat. 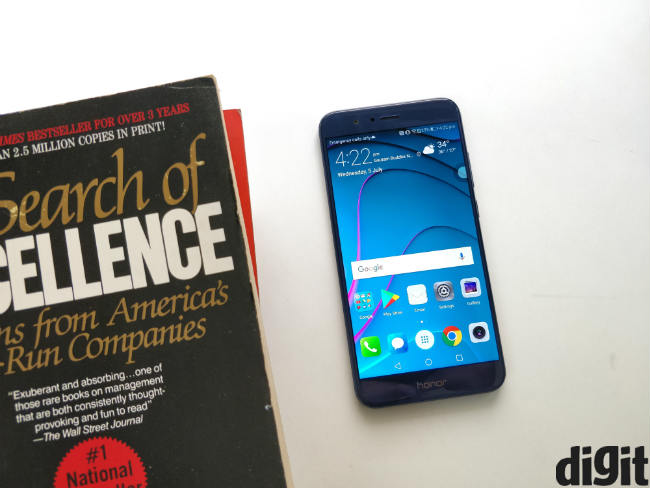 We watched a bunch of videos on the Honor 8 Pro, and apart from the viewing angles, the experience was good. In the Spiderman Homecoming trailer where city landscape looked lush and even Spidey’s red and blue suit looks vibrant. The the dark and gritty environments in the Death Stranding trailer also looked great. The audio output is loud enough for a bunch of people to huddle up and enjoy watching these trailers.

Overall, the content consumption on the display is a treat. Be it playing games or watching movies. The only downside is that the viewing angles aren’t great.

Straight out of the box, the Honor 8 Pro runs on Android 7.0 skinned with the EMUI 5.1. Those that have seen Honor's UI in action in the past will feel at home here. Since the smartphone has 6GB RAM, we didn’t encounter any EMUI related stutters in every day work, multitasking, gaming, so on and so forth.

The UI doesn’t have childish or cartoony icons anymore, and the number of preloaded themes on the device are enough to give it a more mature look. By default, there is no app drawer and all the apps are listed on the home screen, but if you are someone that likes the app drawer, you can get that by changing the home screen layout in the settings menu. 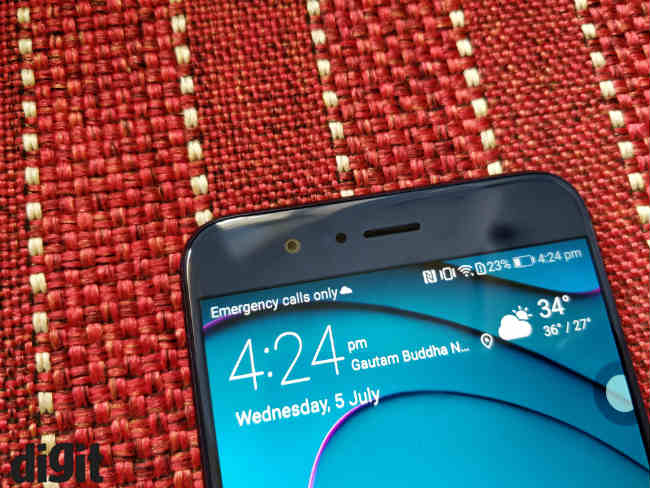 Overall, there is nothing to complain about the UI of the smartphone. There were no random crashes and the overall experience of interacting with the UI, multitasking and accessing the quick settings from the drop down was a breeze.

Performance: A beast on the inside?

Starting with everyday performance, there was no noticeable lag, hiccup, or problem with launching everyday apps and playing games. Be it multitasking, browsing and heavy gaming, the Honor 8 Pro can handle anything you throw at it. There were no serious heating issues with the smartphone either. Yes, when you play a heavy game like Asphalt 8 for a long period of time, the phone does get warm, but that’s normal as the metal back is dispensing heat. There was nothing alarming about the temperature the smartphone reached. Moving to the fingerprint sensor at the back, it is blazing fast and accurate. It unlocks in a heartbeat and that is very good.

Below is a look at how the Honor 8 Pro performs compared to its competition when it comes to benchmarks. 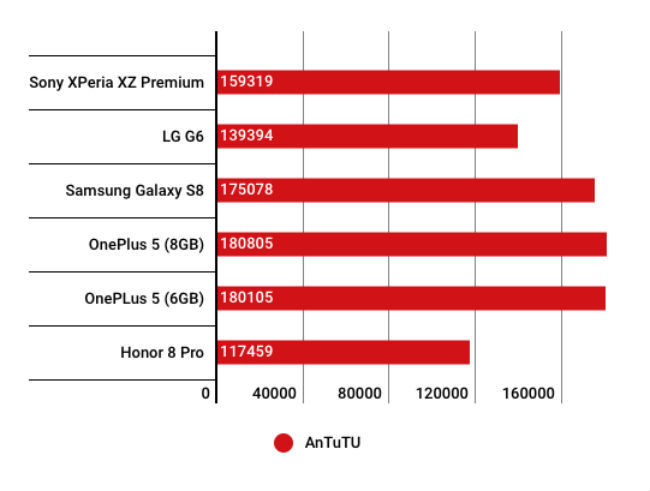 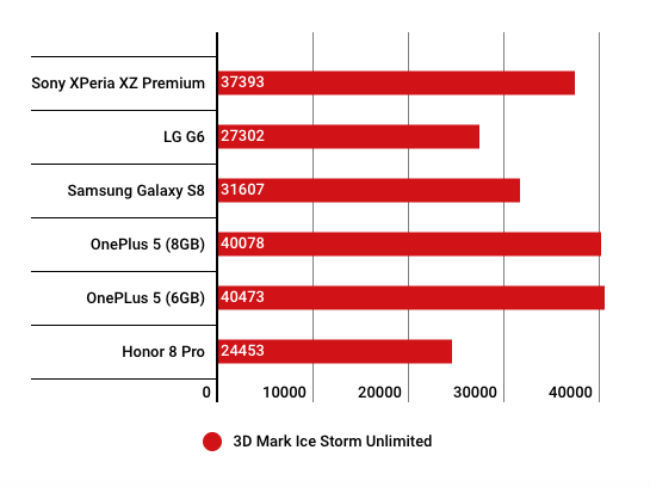 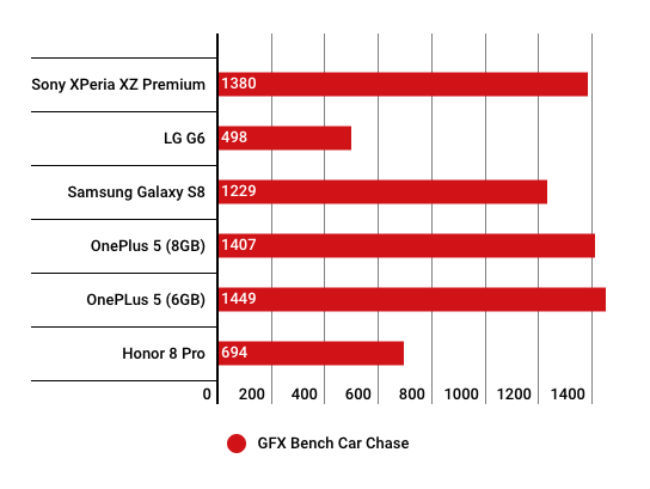 Coming to the camera, just like so many other Huawei and Honor smartphones, the Honor 8 pro sports a dual camera setup. Unlike other Huawei products we’ve seen, this one doesn’t house the Leica branding. Both the RGB and monochrome sensors on the Honor 8 Pro are 12 megapixels. The logic behind two sensors remains the same as previous Huawei devices – more light for better pictures. With some software mumbo jumbo, the Honor 8 Pro combines data from both sensors for good looking images. 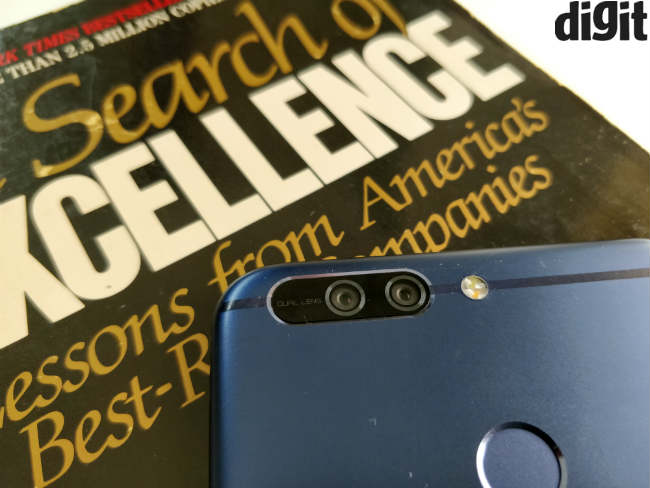 When it comes to the performance of the rear camera, in well-lit situations, the camera clicks good photos. The details are good and the colour reproduction is quite accurate. But, when it comes to low light, the loss of colour and details is obvious. The images clicked in low light are noisy too. The bokeh effect in well-lit situations comes out very well. There are good details in images, and the fact that you can control the level of blur in post-production is nice. From a subtle effect to an absolute blur the effect is impressive. Overall, the camera performs well in good lighting conditions, but not the best when it comes to low light. To put things in perspective, the Honor 8 Pro has a better camera when it comes to well-lit situation and bokeh effect, when compared to the OnePlus 5, but the OnePlus 5 has a better camera for low light photography. Below are some camera samples. 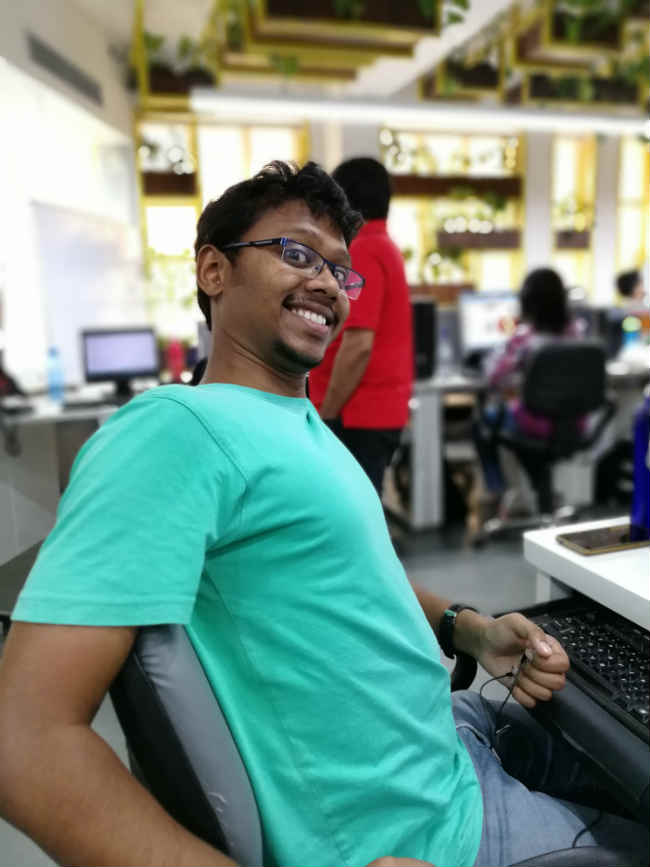 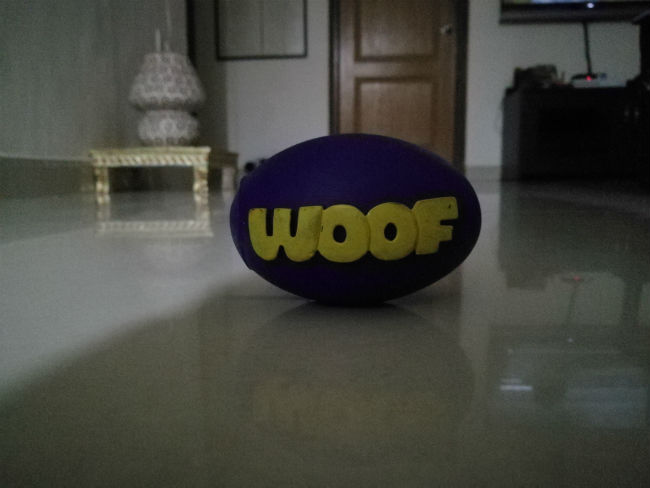 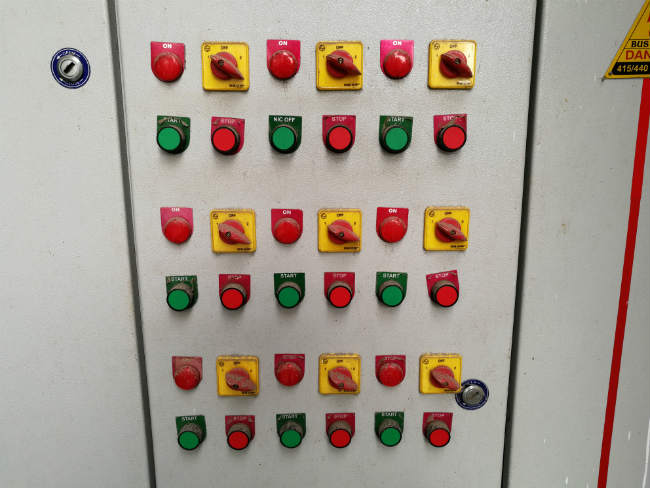 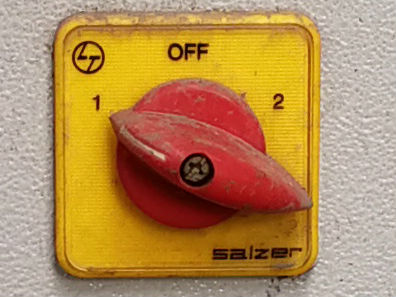 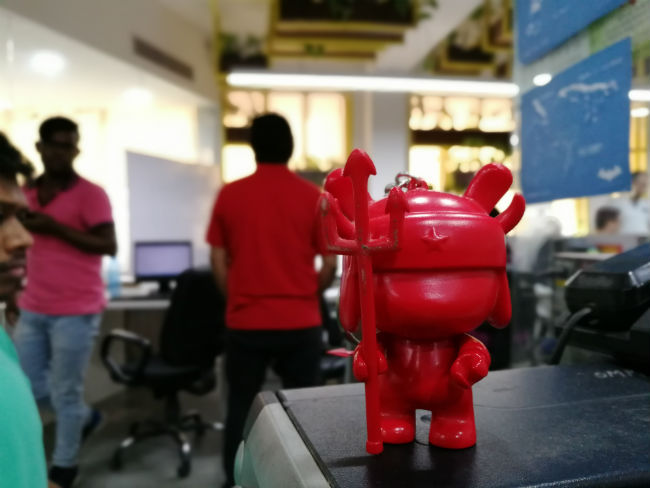 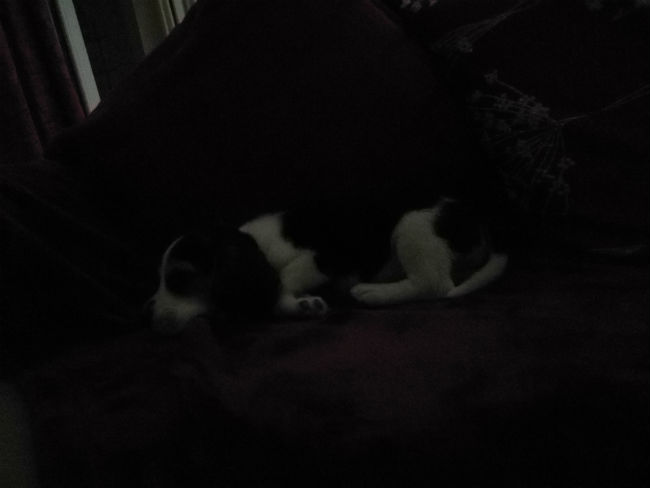 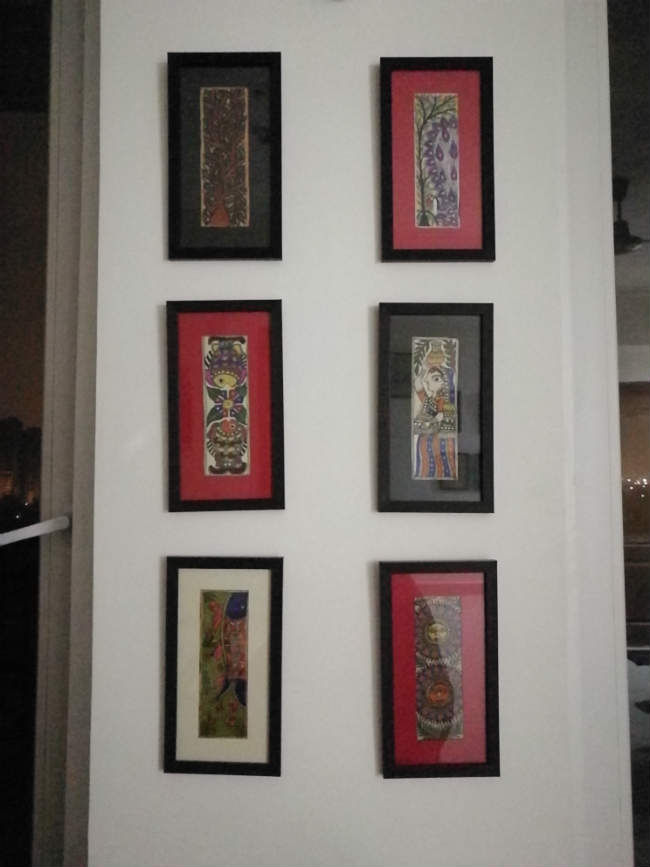 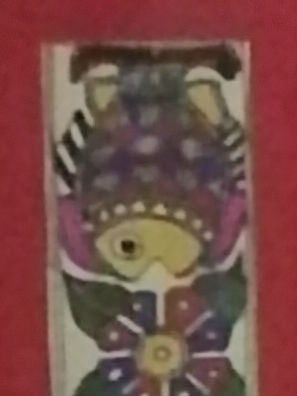 Like we’ve mentioned earlier, the device has a 4000mAh battery tucked into that slim profile. Considering the device has a 2K display, you can expect some intensive apps like games and Netflix to guzzle the battery. I typically lost close to 15% battery with under 1 hour of Netflix viewing. You can expect considerable battery drain if you are a heavy gamer too. In both cases, the brightness was set to auto. However, if you are a basic user who makes calls, some texting, YouTubing, a bit of social media and some light games and web browsing, you will be left with 10 to 20% battery at the end of the day, depending on usage. In our PC Mark battery test the device lasted for 517 minutes. To put things into perspective, the OnePlus 5 lasted for 750 minutes.

Overall the Honor 8 Pro is a good device for what it offers. The build and design of the phone are fantastic and everyday work happens very smoothly on the device. There isn’t a game or app that didn’t perform on the phone. The battery life is decent. If there is a downside, it’s the viewing angles and overall brightness of the display. The camera offers good performs in well-lit situations, but isn't great for low-light photography.

So is this the OnePlus 5 killer we’ve been waiting for? Well, let’s broaden the horizon shall we. The Honor 8 Pro is priced at Rs 29,999. The OnePlus 5 starts at Rs. 32,999. Other smartphones in this price bracket include the Oppo F3 Plus and Moto Z2 Play. If you are looking for some modular enhancements, then you can consider the Moto Z2 Play, it is an interesting product. If you are looking for raw power and a brighter display, then the OnePlus 5 is the way to go. But if a sleek and sexy device is what's on your mind, and stock Android is not a must, then you can consider the Honor 8 Pro. It has all the makings of a phone that is great value for the buyer’s money. 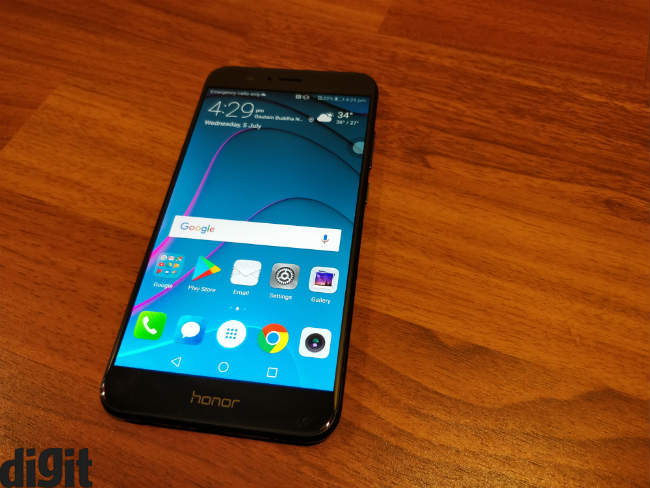