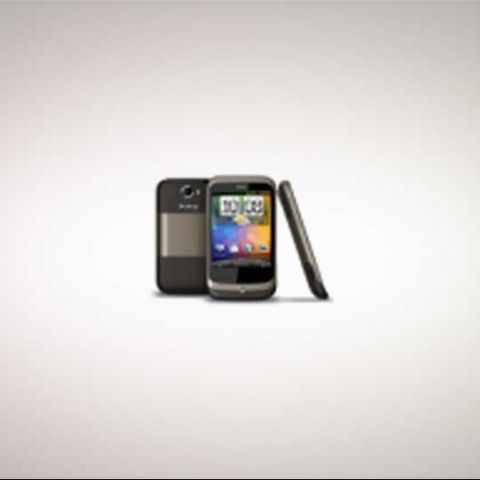 Priced at Rs. 16,590, the Wildfire is reasonably priced. It also incorporates a very good sensitive capacitive touch screen with a very good QWERTY, something few touch screen phones have. If the poor display resolution and contrast do not deter, we recommend this - a good, affordable Android based solution.

HTC has been a roll with a number of launches happening in quick succession. If the entry of their much-coveted, high-end Desire in official channels wasn’t news enough, they slipped in a couple of mid-range handsets for good measure. One such handset was the HD Mini, based on WM 6.5. Admittedly, MS isn’t the hottest proposition around for OS', at least until Windows Phone 7 arrives. Therefore, we present: the Wildfire - an indicative name since Android has been spreading like Wildfire, piggybacking on the hype surrounding anything labelled “Open Source” in this day and age.

The HD Mini was obviously a cheaper HD2. What isn’t as evident is, the Wildfire is a smaller, cheaper Desire. Still cannot get the connection? For one, it joins a relatively select bunch of HTC devices that feature their “Sense” user interface. On the surface, the Wildfire somewhat resembles the Desire, and shares a pretty decent overall build. And they're both Android-based. Obviously, the hardware is radically different, but then the Desire is close to twice the price of the Wildfire. The accessories are also top quality, with a very thick data cable – kudos to HTC for not compromising here.

The front is attractive, and anyone who has seen the Desire will immediately recognise the brushed metal trim around the extended glass around the actual display. At the bottom, this trim curves - a nice touch. The centre portion on the rear also sports a brushed metal look, while the rest of the body on the rear, and a small portion of the front (on the bottom) has a matte-black finish. The only relief from this matte and brushed black on the front is the chromed speaker grilles and the tiny centre button that cleverly incorporates a tiny optical trackpad. Overall, the Wildfire isn’t wildly fascinating upon first glance; subtle appeal is evidently the key phrase behind the design ethos. The in-hand feel is pretty good and the Wildfire isn't overly large. Although it isn’t exactly compact and will feel most at home in larger hands. It’s not exactly slim either, thanks to the thick battery cover but this adds to the substantial, grippy feel. Despite the relative bulk, it doesn’t make an unseemly bulge in ones pocket. Here's a look at the front and rear. Note the neat trackpad and the funky looking dual earpiece on the front, and the exposed five-megapixel clicker on the rear

Other than the trackpad, the remaining functions on the front are touch-based (capacitive). These are large, with adequate spacing; we had no issues using them. The volume rocker is located on the left side and, although it is little more than a long chromed strip, it functions well, thanks to good key feedback. Other than the power key there are no more buttons on the body. The trackpad though small, works pretty well and is fairly sensitive - much better than the much larger trackpad on Nokia’s E72, for example. The trackpad also cleverly doubles as a button, and the menu system is well designed around this interface. Many times while navigating, you can forget about the touch-screen and totally rely on the trackpad – a major plus, especially for those moving up from a non-touch based device. And vice versa. The sensitive touch-screen means, you can ignore this tiny trackpad altogether, and herein lies a major plus. Binary interfacing methods that work almost equally well! While some might complain that, at 3.2-inches, the display is a little small to interface with, we had no such issues; although this is probably the smallest size for a comfortable capacitive interface, and anything smaller would affect usability.

One of the major gripes with this phone is evident the moment one starts moving around the menu system – the display resolution is extremely poor – at 240 x 320 pixels – an archaic resolution that, (as far as we know), only Nokia persists with. Why HTC would take a phone with the obvious potential that the Wildfire has, and drop in an abysmal display is beyond our collective comprehension. With a pixel density of 125 pixels per inch, the Wildfire's display looks pretty pixellated and there is a marked loss of fine detail in the text, menus and this is also visible in the home screens. While the sensitivity of the touch-screen is not a problem while surfing, webpages are a lot less entertaining on account of the lack of pixels.

HTCs Sense UI makes a lot less sense on an Android phone than a WM device since Android already has a much better menu system, although, the embellishments to the menu and the home screen in particular, are well thought out. When swiping through home screens we felt a bit of lag at times. Admittedly, it wasn’t much of an issue but it was present. The rich menu seems to burden the 528 MHz, Qualcomm MSM7225 CPU. We already know that Android isn’t too kind on hardware, and the Sense UI doesn’t help lower the burden on processing resources. However, 95 per cent of the time, the Wildfire is no slouch. Web surfing is also speedy, and thanks to pinch zooming and the sweet browser, any internet-based task doesn’t feel like a chore. The issue of a deficient display rears its head (again) though.

The on-screen QWERTY keypad is pretty good, despite its rather basic look. In portrait mode, things look cramped, but thanks to the great touch-sensitivity, typos are a rarity. In landscape mode, the QWERTY feels the same, and despite the keys getting noticeably spaced out, we noticed no major improvements in usability and ergonomics. Probably, this is due to the great experience in landscape mode - things cannot get much better, and we feel only Apple's iPhone is better. Obviously, HTCs own larger displays will also be better, but for a 3.2-inch screen, the Wildfire is pretty good. All in all, while an on-screen keypad will never replace a hardware one with bevelled keys, the Wildfire doesn’t really miss the latter, and its owner will likely not complain, unless, you intend to use your fingernails – in which case you can forget about usability, and will likely lament the lack of a dedicated hardware keypad.

Thanks to a 3.5mm jack, the Wildfire can also double as pretty decent PMP. Audio quality via earphones is good – good clarity, nice bass and very good volume levels. Video playback is snappy, although the display would benefit with both a higher resolution, and a better contrast ratio. Basically, some of the darker colours blend, while shades of grey are missed; saying this is not exactly for the portable videophile, would be a gross understatement. Call clarity is good per se, with a few reservations. We didn’t have any serious issues in any of the zones, and even in zone three, there was some continuous noise and an occasional loss of coherence but no dropped calls. In zone two, at one point, we faced an issue with vocals on the other line taking on a mechanical timbre, and there was minor disturbance. Basically, most Nokia phones in this price bracket offer better clarity, although the Wildfire hasn't got the worst Android-based antenna we've tested.

The Wildfire is available in four colours; we received the brown version, although the white one seems to look the hottest!

The in-call volume using the earpiece is a little on the low side, and this makes for some interesting times in noisy areas. The handsfree unit offers good clarity, and more than makes up for the deficient volume of the earpiece. We tried the camera next. First up, we noticed that one cannot save to the inbuilt memory, making an inserted memory card a necessity for taking photos. The camera is very responsive, and with a five-megapixel sensor and an LED flash, for the most we faced no nasty surprises. Colours are decent, focussing is accurate, but slow. On default settings, with the flash off, the image tends to be a little bright, with good details. It’s not the best five-megapixel clicker ever to grace a cellphone, but we couldn’t seriously nit about anything. Battery life is decent, and although while heavy call usage, battery life trails off sharply, standby time was pretty good. With half an hour each of calls and browsing, we got through nearly three days on a single charge.

The Wildfire is good handset for those who aren’t looking for the very best touch-screen device around. It occupies a slot that is a couple of rungs lower than the top slew of touch devices, but offers a lot of features for the price. Interfacing is pretty good – something many touch-based cellphones cannot boast of. However, we have problems with poor display - the only component that feels like it’s built to the tightest of budgets. Priced at Rs. 16,590 (MRP), the Wildfire isn’t cheap, but it’s good value – Android 2.1, a good touch-screen with decent hardware, and good performance. If the lack lustre display resolution and contrast aren’t deterrents for you, the Wildfire will satisfy.