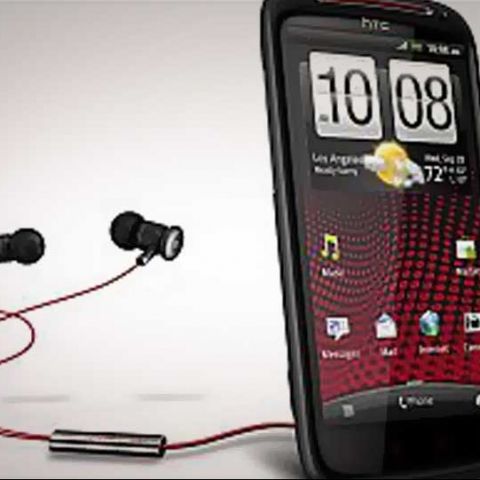 Exceptionally sensational! That is what the Sensation XE is, well and truly. It carries forward the good looks of the elder cousin, and just improves on that a teeny bit. The performance is massively different, and network loss/ death grip issues donï¿½t plague this phone.

The HTC Sensation was touted as the rival to the Samsung Galaxy SII, and was launched sometime around the launch of the SII. However, what it turned out to be was just another Android phone, but nowhere close to being the “SII-beater”. However, what has come around the bend now is something completely different, and better. The new  HTC Sensation XE with Beats Audio is what the Sensation should have been like, in the first place.

The HTC Sensation XE builds on the extremely good-looking HTC Sensation, and then takes it forward a bit more. In the midst of the black finish, there is a tinge of red here and there - the illumination on the keys, the earpiece grille, the border around the camera and the Beats Audio logo on the back.

Below the 4.3-inch display are four touch sensitive keys - Home, Options, Return and Search. They are illuminated in Red, instead of white. However, unlike the Samsung Galaxy SII and the Galaxy Note, there is no way to customize how these will illuminate - never, always etc. The Volume rocker and the micro USB port are on the left side, while the 3.5mm jack and the power key are on the top. Flip the phone over, and you will immediately notice two LED flash next to the camera. To the right of the camera is the hands-free speaker. Press the battery cover unlock latch, and you realize that this one comes out in a lot more quantity than all other phones! No, you haven’t broken the phone!

We had loved the Sensation for the build quality and the classy feel it offered when you were holding the phone. The Sensation XE is even better than that, to say the least. Even though it is 3 grams heavier.

From the outset, you will see the Beats Audio branding on the packaging and even the phone. This is the result of the deal between HTC and Monster Cable Inc who make the Beats by Dr. Dre series of headphones and earphones. The result, apart from the branding is that a very capable set of earphones is provided with the XE, and a nice travel pouch to carry them in. Mostly all phones, even high end ones come with headsets/earphones that sound tinny to say the least. The XE, thanks to these special editions buds will work well as a portable music device.

Power has been given a huge boost as well, with the Sensation’s 1.2GHz dual core making way for a much more powerful 1.5GHz dual core processor. With 768MB of RAM helping it along, no wonder that Android 2.3 is on fire. Comparing it side by side with the Sensation, you immediately notice how much faster the XE is. Not all can be attributed to the extra power from the processor’s side though, and since the RAM amount is the same, we can rule that out too. HTC Sense seems a lot better optimized than the one on the Sensation. Flicking through it is a smoother experience on the HTC Sensation XE. We had to strip all widgets off the UI on the Sensation to make it come even close to the slickness of a widget loaded Sense on the XE. We specifically pointed to HTC Sense, and not on Android OS because we installed Launcher Pro on the Sensation, and its performance improved leaps and bounds once HTC Sense was disabled. Good to see that HTC is focusing on optimizing the Sense on the phones coming around now.

The 4.3-inch display is carried forward from the Sensation, and we do support the adage of “if it ain’t broke, don’t fix it”. The S-LCD display does well on all fronts - colour even-ness, brightness levels and crispness/ readability of text. Where it does fall behind the various avatars of AMOLED is the depth of black levels and colour vividness. Comparing it side by side with the AMOLED displays, and the colours do seem a bit dull. And it is interesting to note that the Galaxy SII has the Super AMOLED display, with a lower resolution, but looks a lot better, particularly for multimedia viewing. The capacitive touchscreen is very accurate, a case proved when browsing web pages. This is where the accuracy helps you while selecting the correct link first time around, and not the ones around it.

During the HTC Sensation XE review, we discovered that its he UI tweaks are quite useful, for the most part. Slide down the notifications bar and you will see an extra tab for Quick Settings, right next to the standard Notifications tab. Here, you can simply turn on/off stuff like Wi-Fi, Wi-Fi Hotspot, Bluetooth, GPS, the Mobile Network, access the full settings list and the basic task manager. The task manager on the SII is slightly more detailed, but even this one will do the job, manually.

While scrolling through the 7 home screens, you get the impression that they are spinning around on an axis, 3D style! The benefit of that is you can flip through all the screens, without every reaching the end and having to flick back again. Simply put, you come back to screen 1 after screen 7, and you can flick back to screen 7 straight from screen 1. The lock screen has some amount of goodness attached to it as well. There is a ring that you need to slide up to unlock the phone, as you normally would. Alternatively, you can configure the 4 shortcuts and drag an individual icon into the ring to unlock straight on that app. By default, you have calls, messages, mails and camera.

The on screen keypad on the Galaxy SII is slightly better than the one on the HTC Sensation XE. Not because the XE’s keypad misses out on anything, but because it tends to look a bit cluttered (read overwhelming, for the newbies) with multiple values assigned to every key. Having said that, we must appreciate that the keypad works very well in portrait and landscape mode - adequate spacing helps with typing quickly.

The 8MP camera has been carried forward to the HTC Sensation XE as well, and quite frankly, it is good enough for once in a while clicking or the occasional video. Colour depth is good, but light sensitivity is a little too much, resulting in considerable amount of graining and the washed out look.

We had explained in great detail in the Sensation’s review that it faces serious issues regarding network handling, call quality and signal drops. The HTC Sensation XE seems to have solved the problem. In areas where we used to find signals completely disappearing on the Sensation, the XE retained at least 1-2 bars.

HTC smartly fitted the XE with a bigger battery, and it was needed with the extra power on tap. Safe to compare this with the Galaxy SII - both will last 2 days on medium usage.

Our Take
The HTC Sensation XE is well and truly a brilliant device. It leaves its elder sibling, the Sensation far behind - in terms of performance and being what it is supposed to be, a phone. Yet, brings along with it a superb build quality and a very classy look. The Sensation XE’s black mixed with a tinge of red at places makes the Sensation look a little bland. We think it is one of the best looking Android phones out there. Compares to the Galaxy SII in terms of sheer performance, but the extra Rs 2k or so that you will pay for the XE is mostly for the Beats Audio branding and headset.