HTC One A9 Review: A tale of love and hate The HTC One A9 is a phone that just works, but its price tag is too high to recommend it. It still lacks in the camera department and it's definitely not a phone for mobile gamers.

BUY HTC One A9

HTC One A9 detailed review

We all criticised HTC for playing it safe with its flagship designs this year, so the company went and made an iPhone. Putting aside the obvious though, the HTC One A9 has a lot more to it than its design, which is more than what can be said of HTC phones of late. It’s a likeable phone that, at times you’ll really hate. The attention to detail is splendid, but then, the lack of attention to obvious things is surprising. It’s the best of HTC and the worst of HTC, all in one phone. I’ve been wondering how to describe this phone in a review for a while now and I’ve arrived at a conclusion. This review shall yearn to describe my usage of the HTC One A9.

Day One: Getting used to an Android iPhone

As much as it looks like an iPhone, the A9 has distinct HTC elements to it. The sides are flattened instead of being round, while the power on/off button on the right side is placed exactly where your thumb would rest. It’s also textured, making it easier to find and get used to. As much as I like these elements of the design, I absolutely hate how unwieldy this phone can be at times. The metal build and thinness combined make it somewhat slippery, but what disappoints me the most is how big it is for a phone with a 5 inch display. The size is somewhere between the iPhone 6 and iPhone 6 Plus, which many may not expect from reading the spec sheet. 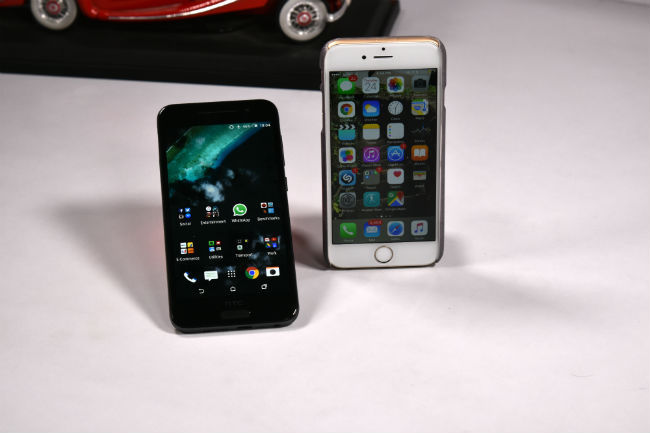 Speaking of the display though, from the first time I took this phone in hand, I’ve been harping about it. The 5 inch 1080p AMOLED panel is the HTC that we’ve all known and loved. It has the warmth of AMOLED screens, but is in no way as oversaturated as Samsung’s Super AMOLED. HTC displays have traditionally been well balanced and this one goes back to that. The display is bright, but not overly vivid, it’s warm, but not overly so. It’s just right, especially for reading. I keep my phone’s display on full brightness all the time and not once did I find the HTC One A9’s display to be too bright or too dim.

Day Two: When the going gets tough

The second day with the HTC One A9 was the true test of its overall performance. I’ve never been more amazed by an HTC phone's performance. The company has gone out of its way to optimise performance for everything but gaming on this phone. For those looking for benchmarks, the GFX Bench Manhattan test returns 420 frames (6.8fps), which is well below what phones in this price range should be doing. Also, AnTuTu 6.0's 66k plus rating is a result of the newer benchmark and shouldn't be used for comparison with other phones, tested with older versions of AnTuTu. The new AnTuTu 3D Bench test puts the HTC One A9 at 7782, which is low compared to its competition.

I’m coming off the iPhone 6S, which means I expected lags, but after the first few hours, I often exclaimed at how smooth the UI performance on the One A9 is. It’s not as good as the iPhone of course, but it’s better than any Snapdragon 615-powered smartphone I’ve tested. The Moto X Play is perhaps the closest that any phone comes to this. The One A9 has both stock and Sense UI options and irrespective of what you choose, for regular browsing and apps, it’s one of the smoothest phones till date.

Having said that, it was only on the second day that this phone was really put to the test. The background app activity was at its fullest and the phone was filled almost to the brim with my music, games and apps. I played the first game, Need For Speed: No Limits, on this phone at this point, which is when I was surprised. No Limits ran almost frame by frame on this device, while Marvel: Contest of Champions was more playable, but still riddled with stutters. It’s almost like HTC doesn’t want this to be a phone that mobile gamers like me, buy.

Disappointed, I shut off the game and returned to browsing and reading everything I had saved on Pocket and the various websites I follow. In a matter of minutes I was once again marvelling at how well the Snapdragon 615 was performing. There’s 3GB of RAM that is managed very well, allowing you to multitask away to glory. I had 16 tabs open on Google Chrome, while Apple Music played in the background, Pocket finished downloading stuff and a bunch of more apps were running.

Update: The Developer Mode on the HTC One A9 reveals that by default, the High Performance mode on the phone is turned off. Turning this on leads to much better gaming performance and improved our outlook of the phone. It affects the battery life of the phone though and hence doesn't change our overall rating of the phone.

While it was apparent from the get go, it took me three days to be sure that the HTC One A9’s fingerprint sensor almost never misses. Android Marshmallow’s support for fingerprint readers makes this oval shaped fingerprint reader much easier to use. The HTC One M9 Plus’ fingerprint reader required me to place the finger in an awkward position to get the print, but with the A9, I barely pay attention to how my fingerprint is placed on the sensor. It picks the print and unlocks the phone in a matter of milliseconds, faster than Apple’s Touch ID, but slightly slower than Nexus Imprint on the Nexus 5X or Nexus 6P. Of course, that could be attributed to the processor as well, but the Snapdragon 615 on the Lenovo Vibe P1 takes much longer than the HTC One A9, which means that the software does play a role here. 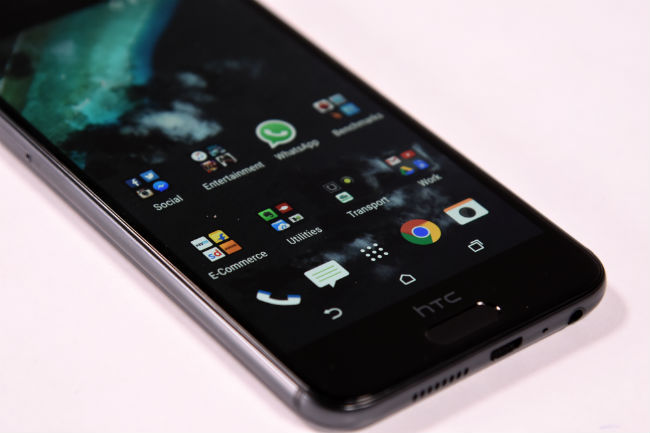 The attention to finer details continues with the audio quality on this phone. It doesn’t make a big difference when listening to music through in-ear headphones like the House of Marley Little Bird headphones, but my Audio Technica CKX9 picks up a little more volume. The difference though will be apparent for audiophiles, using really high-end headphones, in the range of the Sennheise Orpheus. I’m not sure it’s a big bonus for the majority of the consumers out there, but it’s the kind of thing we’ve all appreciated HTC for over the years.

The third day was also the day when the battery was tested the most. The HTC One A9 has a 2150 mAh battery, which is low by industry standards today and it can’t last you a full day, except that I expected it to last much lesser than that any way. On any given day, with a lot of screen on time, the HTC One A9 easily got me past the 12 hour mark. It’s the industry average nowadays and we still yearn for more battery life out of smartphones in general, but the fact that the HTC One A9 can meet the standard with a smaller battery shows more attention to detail on the software front and I’m not talking about Marshmallow’s Doze feature. Instead of dropping 10 percent or more battery overnight, the HTC One A9 drops about 7-8 percent over five idle hours, which is still more than what I’d like. You have to realise though that the battery life I got is with the screen brightness turned to maximum and no Power Saver modes used, so it’ll be considerably more for most users. 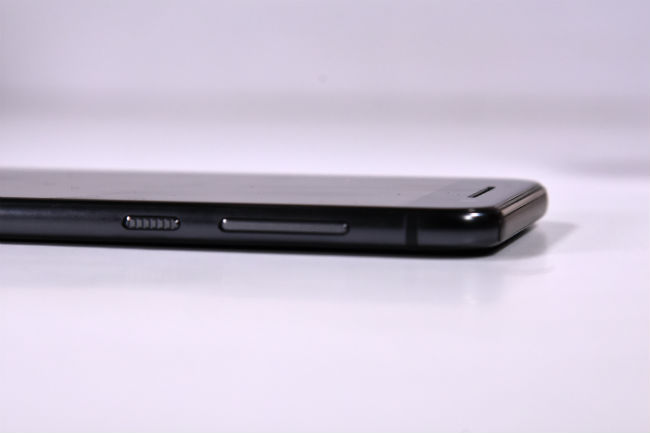 There were more lags at this point though. The Gmail app sometimes stuttered while switching emails, while Chrome and Drive took a bit longer to load, but largely, the phone’s performance remained consistent and very likeable. It’s one of those things that just work, no matter what you think from the spec sheet.

There’s also the camera. A 13MP sensor on the back and 4MP ultrapixel selfie shooter is very HTC-like now, and while the HTC One A9’s camera is definitely better than what we’ve got from HTC so far, it doesn’t hold a candle to most of its competition. There are Lumia phones in this price range, while the OnePlus 2, Yu Yutopia, Honor 7 and Qiku Q Terra are all faster and better. The One A9 takes some time to focus and the colours, details and sharpness are good in the way that I like this, but all the other phones I mentioned above are better. Also, low light performance is still sub-par. The front camera softens images to suit selfies, but it's definitey over-softened like in the M9 Plus.

All the rest: Would I buy this phone?

Frankly, no I wouldn’t, but the reason for that is simply the poor gaming performance. I like playing a lot of games on my phone and the HTC One A9 doesn’t allow that. It’s a high end phone for the more simple and basic users though and if you can get over the fact that it looks like an iPhone then your money is well spent. But that’s when you ask me how much this phone costs and despite all its goodness, I can’t explain the Rs. 29,990 price point. There are plenty of phones that are much cheaper and well...they just work, like the HTC One A9. Names like the OnePlus 2, Honor 7 and Qiku Q Terra come to mind here and keep me from recommending this phone to my readers. Personally though, I’ve enjoyed using this phone more than the Snapdragon 810-powered Yu Yutopia and many other Android phones today. The HTC One A9 is just not the best phone for its price range and that's a big drawback for a phone that's considerably more expensive than its competitors.