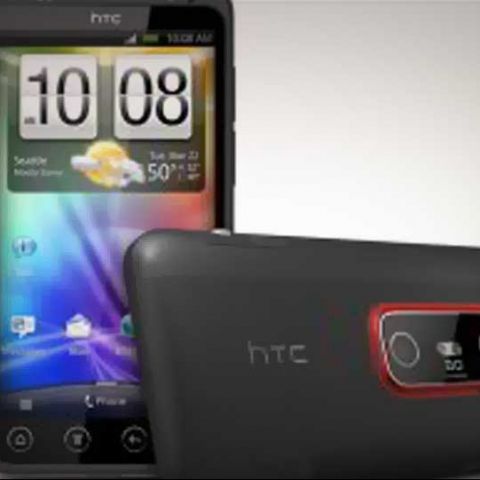 At Rs. 36000, the HTC Evo 3D will only appeal to those who really want a 3D display in their phone. We were impressed with the overall performance of the device, however, it has an excellent 2D display that outshines its 3D counterpart. The LG Optimus 3D rates higher if stereoscopic image quality was the only measure.

Look & Feel
The first 3D phone from HTC - the HTC EVO 3D straightaway looks and feels like an expensive smartphone. The 4.3-inch qHD display gives the smartphone an imposing look, with some distinct design accents. Flip the Evo 3D over, and while the battery cover has a simple all black look, the fine pattern of the diagonal lines gives it a fine texture finish. A red-plated frame encases the dual camera mount.

The USB port is on the side panel. On the right panel of the phone is the dedicated camera key. This key does have a sense of solidity to it - made with brass metal with chrome finish to it. Interestingly, the Evo 3D comes with a simple slider key to switch between 2D and 3D modes. The weight doesn’t seem very evenly distributed, and it is most visible when you attempt to use the phone with one hand. The device is constantly trying to tilt backwards, headfirst, and that can be very disconcerting for anyone at first. The touch sensitive keys below the display are very sensitive, so much so that even a minor brush is unfortunately enough to make them respond. 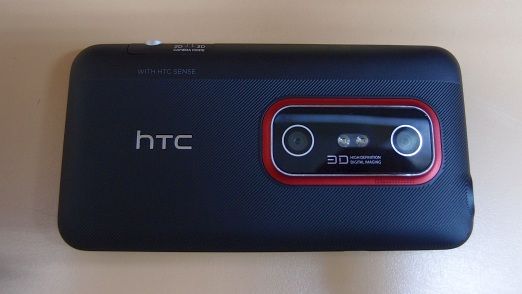 Unlike the HTC Sensation the radio antennas are embedded well within the body, with no metal plates on the inside of the back panel. The mic is nicely placed inside the bottom panel of the Evo 3D. Overall, the device does look and feel like a premium high end product from HTC.

Features
The HTC EVO 3D has a stereoscopic LCD screen of qHD resolution of 960x560 pixels. It uses a parallax-barrier technology to display glasses free stereoscopic images, just like LG Optimus 3D. That is an extra screen layer that makes sure that each layer is individually seen with each eye giving a sense of depth. The technology has some downsides however, and to be noted is that the 3D effect only works in the landscape mode, with the 3D camera apps, and within the gallery. The Optimus 3D has a large number of pre-installed apps optimized to use its 3D screen, something the Evo 3D doesn’t have.

With the 3D display of the Evo, each eye gets only half of the screen’s horizontal resolution. Also, to get the best 3D experience, the user will have to find a sweet spot between their eyes and the handset screen, which is going to be at a slightly different angle for everyone. In the Optimus 3D, the 3D viewing experience was much better with the perceptible depth and the colour was more evenly spread out. In the Evo 3D though, the entire experience seems more laborious and bereft of the fun. The 3D effect is less dramatic due to lack of depth, and the content isn't very sharp either. That explained, the 2D performance offered by this display is a complete opposite of the disappointing 3D performance, and for the better! The 4.3-inch display size ensures this phone is comfortable to use in many scenarios - typing messages, viewing multimedia and browsing web pages. However, while the text is crisp and brightness levels are quite good, the HTC Evo 3D does lose out to AMOLED displays in terms of colour depth and black levels.

SENSE 3.0: Eye Candy
The HTC Evo 3D comes with Android 2.3.4 Gingerbread wrapped in the HTC Sense UI 3.0. This is the same one that we saw with the HTC Sensation, but has been slightly tweaked for the 3D bit. The Sense 3.0 lockscreen has four shortcuts and a ring at the bottom of the screen. To unlock the device, one must drag the ring towards the center of the screen. The EVO 3D comes with six lockscreens preset, and can be accessed within the Personalize Menu. Unfortunately, you cannot download more lockscreens from the HTC Hub, but you can get a lot of widgets for these screens. The Friend Stream Widget with SNS updates and the Weather widgets show of the Sense UI cool animations.

This version of Sense also offers the notification bar, which can be swept aside by just using the swipe gesture starting from the top of the screen going down. At the top are the recently used applications. There are 7 shortcuts for the most important quick settings - Wi-Fi, Wi-Fi hotspot; Bluetooth, GPS, All Settings and the Task Manager.

Just like the Sensation, the Fast Boot feature is enabled on the HTC Evo 3D as well. But it won't work in case you have removed the battery, and are restarting the phone after putting the battery in again. However, when Fast Boot does work, the applications data state at the time of last use will be preserved. For instance if you were browsing a website before turning the phone off, the browser will restore your session. The preinstalled task manager does not show start up programs that automatically start up when the phone is switched on, and may be eating up memory in the background. The need for downloading Advanced Task Manager is still very much there.

Performance
Unlike a lot of other HTC phones, the Sense UI on this one seems snappier; thanks to the dual core 1.2GHz processor combined with 1GB of RAM. At the first boot the phone shows some 808 MB of total usable memory, out of which 222 MB is used and 541 MB is free to be used. After a while of using it, and opening apps, the free RAM amount does come down considerably. But the Evo 3D doesn’t seem to be getting any slower in terms of OS and app performance.

Moving to the camera of the HTC EVO 3D which not only has one, but two 5MP snappers on its back that are capable of capturing 2D photos in full 2560Ñ…1920 resolution and stereoscopic 3D images at up to 2MP. The interface of the camera is very space efficient and looks unchanged since the Sensation - most of the controls are at the right side of the viewfinder. The unique camera key is probably the best we have seen too! The 3D photos taken by the Evo 3D exhibit some flaws - corner softness, heavy noise reduction and over sharpening of certain portions. Colours in daylight photos tend to be slightly off but a lot of it is attributed to the pink spot in the center.

It is disappointing to note that the Evo 3D shoots 3D images in only 2 MP, which is less than the Optimus 3D that captures 3D images in 3MP, combined. The camera was more impressive in 2D mode.

HTC EVO 3D records videos in 720p resolution in both 2D and 3D modes. Although now days 720p is adequate enough but a Full HD tag is best suited with the high-end smartphones like these.

Unlike the HTC Sensation where death grips issue affected EDGE and Wi-Fi signals, the Evo 3D doesn’t face this problem.

While the Evo 3D did not have the Wi-Fi signal drop issue, we felt that the call quality left a lot to be desired. The audio wasn’t clear, and various scratchy noises ruined the conversation, even at full signal strength. Compared with an year old Sony Ericsson X10i, the Evo 3D’s call quality really does sound mediocre. It seems that HTC does have a problem with weak GSM antennas as similarly to be noticed with the Sensation and the Desire Z. We have reviewed phones with poor call performance, but for a smartphone in this price segment, this is a major drawback, and not just a minor disappointment.

Battery life is decent, better than the Sensation for sure, but not great. Seems like the Dual core processors have issues with scaling down when not being used at full load. The battery doesn’t last any more than a day.

Our Take
Straightaway, the Evo 3D does feel like an expensive smartphone. At Rs. 36,000, the HTC Evo 3D does appear to appeal to those who really want a 3D display in their phone. We were impressed with the overall performance of the power package in the phone. However, the call quality and battery life are disappointing. The phone has an excellent 2D display, but the LG Optimus 3D’s three-dimensional display seemed slightly better. You may want to consider the LG Optimus 3D before plonking the cash.