The HTC Desire 820s is not a performance beast nor the lazy non-performer, it settles itself for somewhere in between. It is a good combination of features which make it a considerable choice over a few but still lacks the overalls to be unequivocally recommended without an ‘if’ clause.

The budget smartphone segment has been the point of focus for phone manufacturers for a while. This price segment (which extends up to Rs. 20,000) is home to some of the best value for money offerings in the market right now. Be it the OnePlus One, the Xiaomi Mi4 or the Honor 6, all present stiff competition to the HTC Desire 820s. To overcome this fact, the Desire 820s uses HTC's tried and tested formula of good looks and true to  value features, but is it enough? Let's find out. 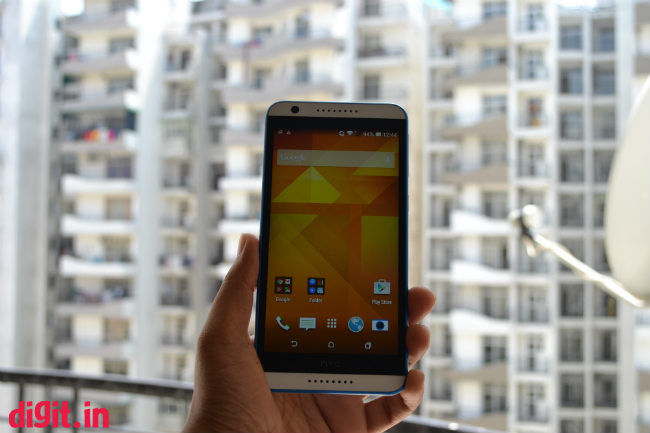 HTC is one of the few companies which has its own distinctive design language and give all its phones a unique look. Moreover in HTC’s Desire range of phones the design is kept quite similar across the range albeit materials can be different. Plainly put, the Desire 820s is a good looking phone. The dual-tone colour setup gives it a very distinctive look among its competition. Button placement is good as well and offer satisfactory travel. 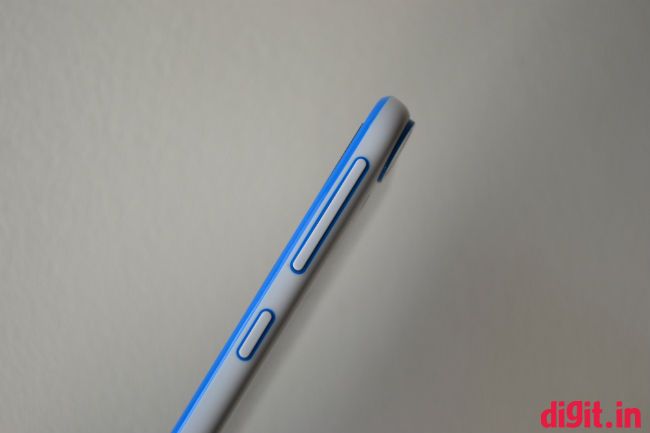 From a build point of view the smartphone has a plastic shell which is good but is definitely inferior to what OnePlus One or Honor 6 offer at this price. The slim profile and the slippery back may require users to purchase a cover. Another thing that I noticed was the camera protrusion at the back that has a flushed glass cover which will eventually scratch. That said, the phone felt sturdy enough during my use and will do just fine if you are careful. 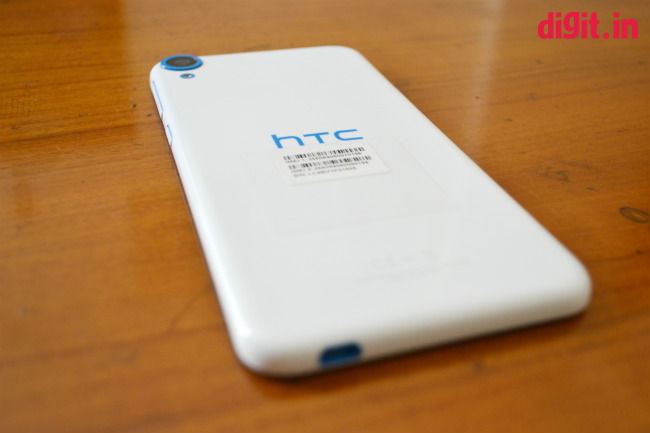 Displays on HTC devices have been good lately and the Desire 820s is no different. The said display has good colour reproduction with decent viewing angles. Since it uses a good quality LCD panel, whites and more importantly, reading text is much easier on the eyes. The display also gets Gorilla Glass 3 Protection, although sunlight legibility could have been better. 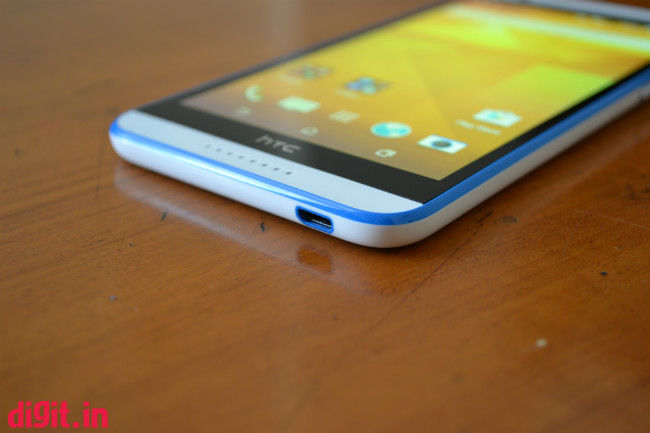 Coming to the UI, it's business as usual with HTC Sense 6 laid over Android 4.4 Kitkat. Swipe from the left brings up the BlinkFeed, and one can see small bits of HTC’s custom touches here and there but otherwise it's a clean and true to stock interface. HTC’s sense is one of the lightest custom UIs out there and comes with only a couple of pre-loaded apps. 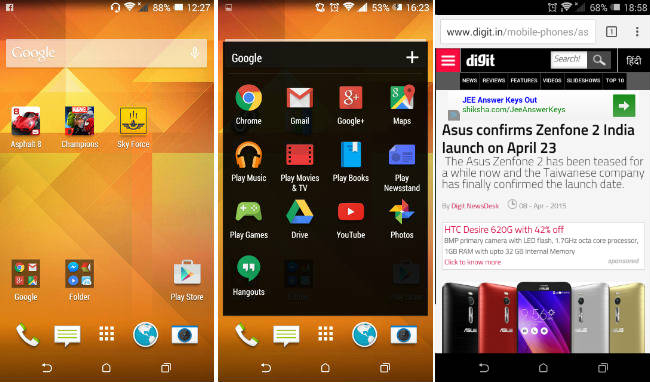 The Desire 820s is an average performer in its price range and falls noticeably below what the Xiaomi Mi4 or the OnePlus One achieve. Powered by a new gen 64-bit Mediatek MT6752 SoC, the phone felt fast and responsive. In the entire time I used the phone It didn’t slow down but it did freeze up and restarted a couple of times while playing Sky Force 2014. 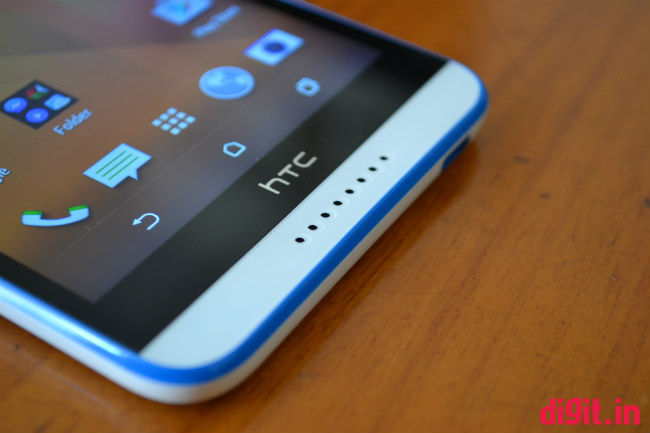 I'm happy to report that MediaTek has listened to critics and the heating issues have been taken care of, but only to an extent. The heating issues were there and only felt when I left the camera open for a prolonged time or tried to play games for more than an hour straight.

The phone runs on Android 4.4 Kitkat out of the box and HTC has shared no plans to update the phone to Android Lollipop. Check out how the phone performs in synthetic benchmarks.

The dual-speaker setup has very low sound output, just know that if you are like me and use the alarm clock on your mobile, you are going to be late to work. The earpiece speaker is also not that loud and I had trouble listening to people on the other end. Sound via headphones is okay (average) and same goes for the signal reception on the Dual-SIMs. 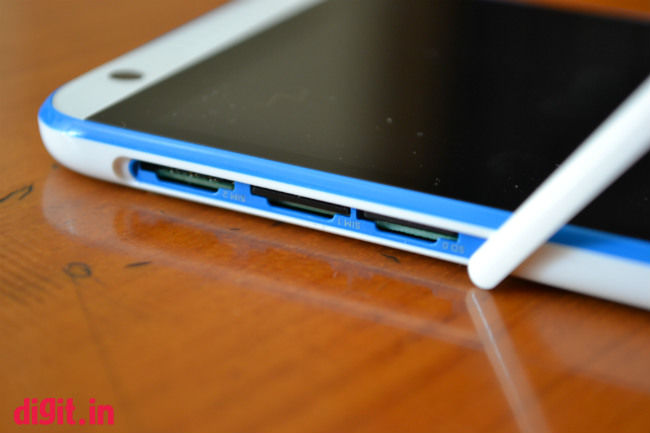 There is a slight protrusion at the back which houses the 13MP camera. It is one the best 13MP shooters I have seen in a while. The colour saturation, vibrance and fidelity is top notch. The camera takes pictures instantly and only a moment longer when shooting in HDR. The front facing 8MP camera is good as well and the camera app has a beautify feature. 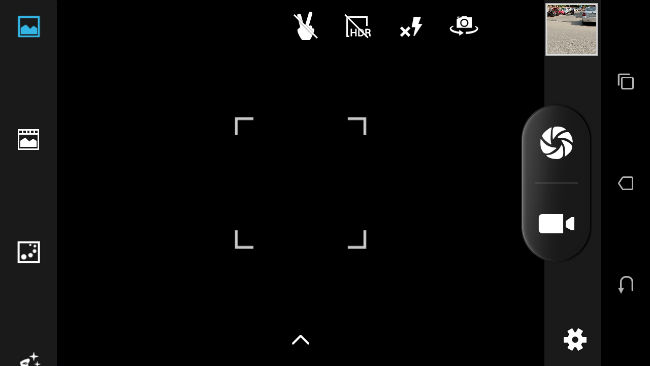 The 2600mAh sealed-in battery is good. On an average day with moderate usage I was able to get about 8 hours of battery life. This was enough to last a day quite easily. The battery only depletes rapidly if you play games at a stretch but that is true with almost every phone.

If you look beyond its design, display and camera, the HTC Desire 820s is an average performer with decent battery life. It might not the chart-topper I had hoped for but it does take up the challenge quite well. Overall, the HTC Desire 820s is a good phone and offers yet another option to the upper end of the budget segment. You can still opt for the OnePlus One, Mi4 or the Honor 6 over this HTC.