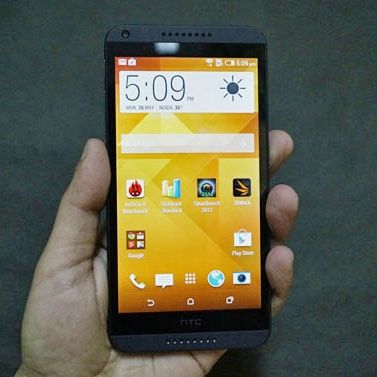 The Desire 816 is a great attempt from HTC in bringing out a mid-ranged phablet. The design is well done, as always, and the phablet also offers a competitve perforamnce package thanks to the Snapdragon 400 SoC. The phablet is a powerhouse in the multimedia department and also comes with a great 13MP rear and a 5MP front camera. At the price point, the phablet is a strong recommendation from us.

The latest phablet from HTC is not only priced well, it sounds good on paper as well. The 5.5 inch device runs on a Snapdragon 400 quad-core processor with 1.5GB of RAM running on the latest Android 4.4.2 update. Also, it seems to give a strong competition to Sony’s latest phablet, the Xperia T2 Ultra. So let’s take an in-depth look at the HTC Desire 816…

The Desire 816 is pretty large device with a 5.5-inch Super LCD2 with 1280x720 pixels resolution. The pixel density is at 267ppi which surprisingly doesn’t look all that bad. The display is bright and contrast level on the display is excellent. Viewing angles are perfectly good and colours don’t fade all that much. The touch response is smooth and feels buttery smooth. The bezels above the and below the display are wide to accommodate the stereo speakers. There is also the 5MP front camera right next to the top speaker and the usual sensors and notification LED below them.

The phablet isn’t too bulky and weighs at about 165gms and is pretty slim at just 8mm. HTC has always been excellent in designing their smartphones and the Desire 816 is a neat looking phablet. The back is a bit disappointing with a glossy soft plastic finish which is prone to smudges and fingerprints. The back also has the 13MP camera and an LED flash with a metal ring around it.

The edges have a rubberised finish which extends to the front where the stereo speakers are. The right edge has two nano SIM card slots (Really?) and the microSD card slot hidden under a plastic flap which blends in well the design. The top has the 3.5mm stereo jack and the mic for video recording. The left side has the power/lock button and volume control keys which are made out of metal although a bit flimsy. The microUSB slot is placed at the bottom.

While the Desire 700 was a complete disaster, HTC has done quite well with the 816.

The Desire 816 runs on the latest Android 4.4.2 Kit Kat along with the latest Sense 6 UI which we have already seen on the HTC One (M8). All the features and apps are quite similar although you don’t get the lockscreen gestures so no unlocking the display when it is inactive. You do get the new swiping features on the lockscreen where swiping to the left opens the first homescreen and swiping to the right takes you to BlinkFeed. You can also swipe up the icons in the dock to open various apps right from the lockscreen. There is the addition of new colour themes as well which makes the UI more vivid and colourful.

Sense 6 UI works very smoothly on the phablet and all the apps and multitasking is no issue at all. Ever since HTC launched Sense 5, we have been happy with how things work on HTC smartphones. Previous versions were quite memory heavy but thankfully the new UI has a much minimalistic approach and is lag free. HTC does add some of its own apps like a Kid mode, Car mode, Zoe, Polaris office and more. The phablet being a dual-SIM, offers dual-standby so you don’t miss calls or messages from any of your numbers. As always, BlinkFeed works great and we used it more often than we opening individual apps like Facebook or Twitter to check our timelines.

The Snapdragon 400 processor works quite well and gives enough power to the handset to handle graphics intensive tasks like playing high-end games including Dead Trigger 2, Injustice, Real Racing 3, and so on. Multitasking and apps used on daily basis work well and we didn’t face any issues or lags at any instance. To get a calculative score of the performance, we ran some benchmark apps on the Desire 816, including Antutu X, Quadrant Standard, Smartbench 2012 and 3DMark. 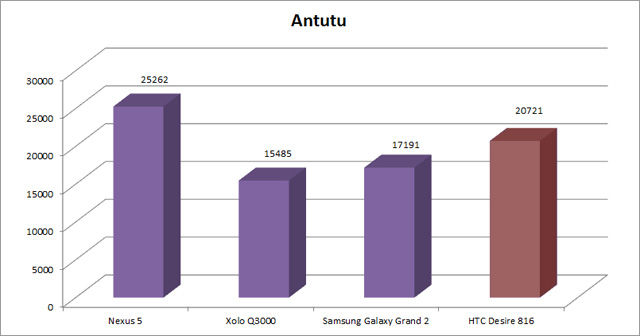 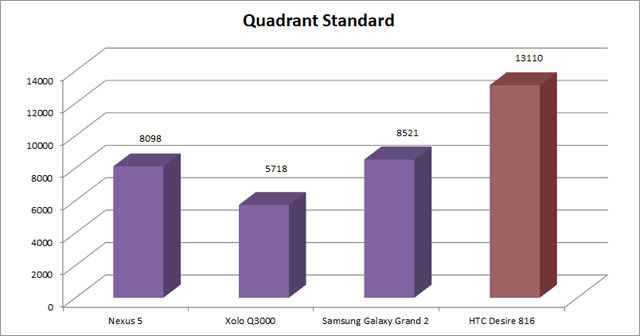 We love how HTC incorporates stereo speakers on its new smartphones. Ever since the company had struck a deal Beats Audio, HTC smartphones have been offering some promising audio experience. We had loved the dual-stereo speaker system on the HTC One (M8) and the Desire 816 is even better. The speakers on top and below the display offer an excellent audio output which is loud and crisp. There is a good balance of bass, mids and treble which makes it one of the best speaker systems on a phablet device.

In the battery department the Desire 816 comes with a 2600mAH, which sounds enough. The battery backup is quite decent as one can squeeze out a lot of juice out of the battery. Thanks to the power saving modes on the phablet, we managed to get about one and half day of battery backup on a regular usage including a bit of gaming, listening to music and scrolling through various social media apps. The battery test resulted in a loss of 15%, where we played a full HD video on the phablet for one hour with the display on full brightness. This means one can continuously play an HD video for about six and a half hours.

The Desire 816 has a 13MP rear camera with a BSI sensor backed up with an LED flash and a front 5MP camera. The camera UI is same as we had seen on the HTC One (M8) but here you only get three primary modes; camera, video and selfie (front camera). You do get to tweak around with a bunch of focussing modes, filters, white balance, ISO, exposure compensations and so on.

The focusing system is quite good and isn’t sluggish. The camera manages to focus fast in well-lit conditions but does take some time when shooting in low-light. Noise is well under control, but pictures taken in low-light are grainy and lack details. Oh one tiny issue we faced was that the flash doesn’t fire if the battery level is low.

Check out some camera samples below:

The camera is also capable of shooting full HD videos which look good, although one has to keep tapping on the screen to refocus on your subjects. Audio recording in videos is well synched and balanced.

While we were quite disappointed with the Desire 700, HTC has improved vastly with the 816. With a better price point and way better hardware, the Desire 816 is a great option if you are looking for a mid-ranged phablet. Performance is great in its class, excellent multimedia and camera capabilities and the latest Android update, the Desire 816 is the best option in the mid-to-high range of smartphones.

If you are looking for other options, try the Sony Xperia T2 Ultra or the Samsung Galaxy Grand 2, both of which are priced in the similar bracket and offer similar specs. If you don't fancy phablets, then you can consider the Moto X.