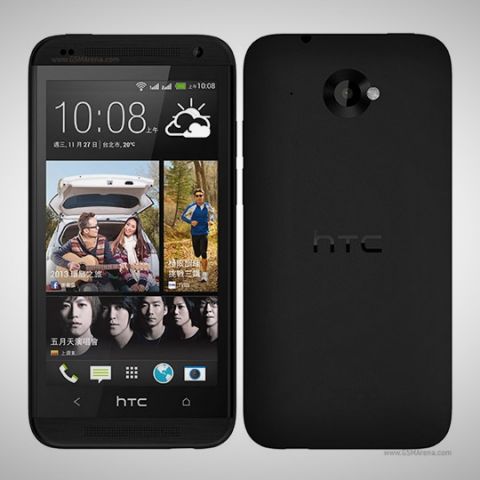 Although one of the most graceful looking smartphones in the market, the HTC Desire 601 dual SIM is just overpriced for the features it offers and doesn't even give a groundbreaking performance either. One could easily go for a much faster and better equipped smartphone at the same price range.

HTC has been producing some of the best looking smartphones and recently it updated its range of Desire smartphones. Including features like BoomSound speakers, dual-SIM capability and their very own Sense UI, the company is trying to hit the right notes. But isn't making an impact somewhere.

Specifications
Running on Android 4.2 with Sense 5 UI, the HTC Desire 601 dual SIM is powered by a 1.2GHz quad-core processor with 1GB of RAM. It has a 4GB of internal memory which is quite less as updating the preinstalled apps fills up half of it. Although there is a microSD card slot to expand it further. Other features include a 4.5 inch display with a 960x540 pixels resolution, a 5MP rear camera, a VGA front camera, dual-SIM capability, Wi-Fi, 3G and a 2100mAh battery. The specs of the Desire 601 dual SIM sound decent but at a price tag of about Rs.24,000 it is way overpriced.

Design and built
HTC has always put in a great deal of effort when it comes to designing their smartphones. The Desire 601 dual SIM gives off a uni-body look but the back panel comes off to reveal the two microSIM slots, the 2100mAh battery and the microSD card slot. 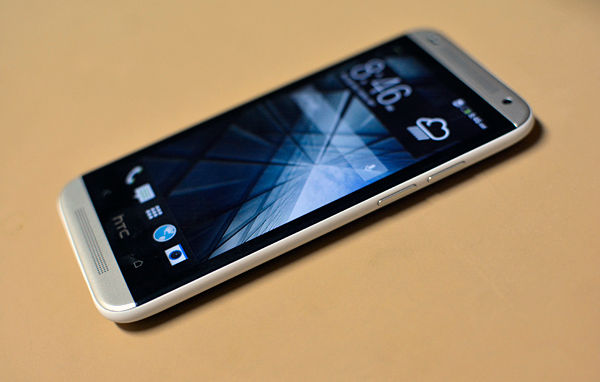 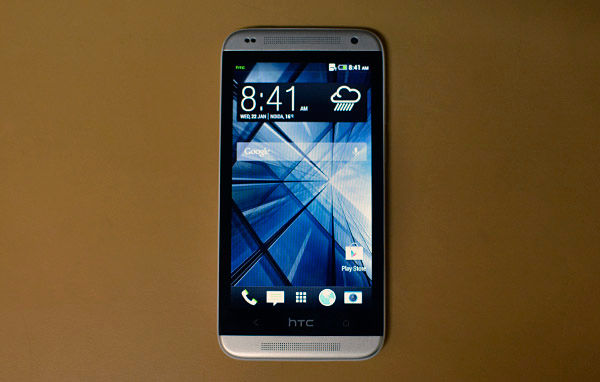 The 4.5 inch display is crisp and has a resolution of 960x540 pixels. Colors are vibrant and the display offers decent brightness levels under sunlight although not the best that we have seen. A 720p display was quite crucial here, considering the price of the smartphone. HTC has only used two capacitive keys under the display (back and home) and has included an HTC logo in between the keys. There are two speakers (top and bottom of the display) which come with HTC’s patented BoomSound technology that we have already seen on the HTC One devices. There is a front camera and a bunch of sensors along with the top speaker also. The top edge has the power/lock key and the 3.5mm audio jack, the right edge has the volume control keys and the microUSB port is on the bottom. 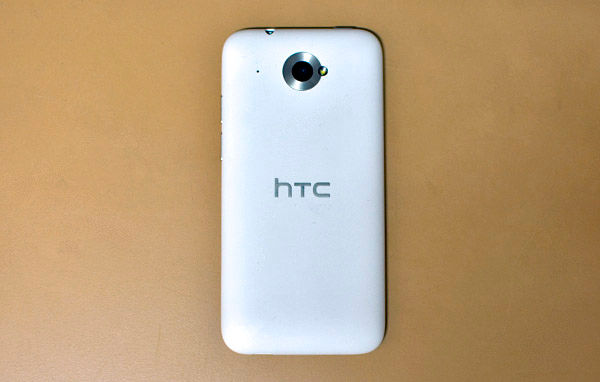 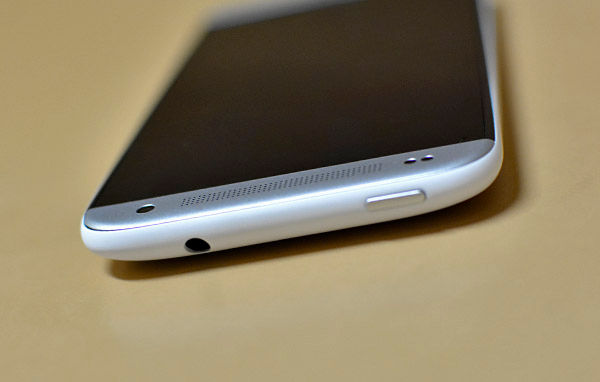 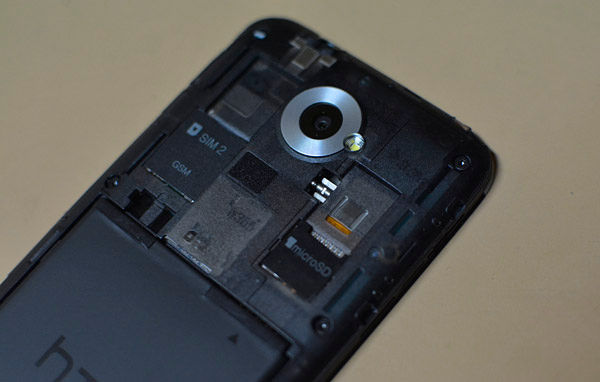 The back panel is made out of soft plastic which thankfully is not glossy, thus giving a better grip. The back houses the 5MP camera with an LED flash which stumped us as the lower and cheaper Desire 501 dual SIM has an 8MP camera sensor. Under the back panel there are two micro SIM card slots, a microSD card slot and the 2100mAh battery.

The overall design is balanced and the weight and dimensions of the smartphone feel just right in the hand.

OS and performance
The Desire 601 dual SIM runs on Android 4.2.2 with Sense 5 on top. The OS has a nice minimalistic look and nice feedback sounds. The UI is similar to what we have seen on the HTC One devices and includes features like AccuWeather for Sense and Blinkfeed. We personally love Blinkfeed as it gathers your Facebook, Twitter and news updates and provides them in a tile format on one of your homescreens. It’s quite handy as it reduces the time for you to scroll through different apps.

HTC has also added a ‘Kid Mode’ which lets you lock some of the features of the smartphone with a password so that you don’t have to worry about your kids playing games and sticking to Facebook all day.

Coming down to synthetic benchmarks, the Desire 601 dual SIM is an average performer and doesn’t impress us with its results. Check out the results below: 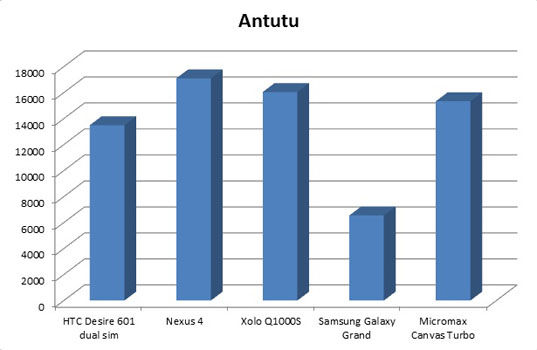 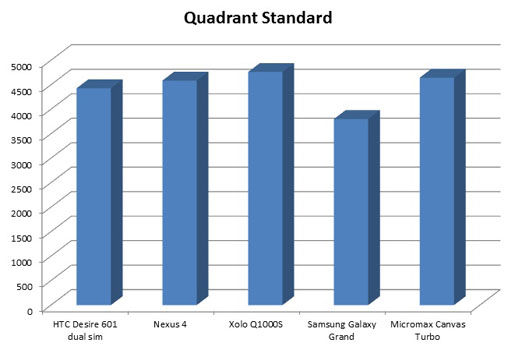 Everyday performance is actually quite good on the device as multitasking is pretty smooth and multiple apps run effortlessly.

Gaming experience was satisfactory on the Desire 601 dual SIM and it managed to run major game titles without showing signs of any lag. Again, we were annoyed by the fact that the internal memory is just 4GB and installing games like Real Racing 3 and FIFA 14 were an issue as they require a large amount of free space.

We were quite impressed with the 2100mAh battery as it managed to juice up the smartphone for a full day. Our tests revealed that on a full charge, the smartphone can run a full-HD video continuously for 7 hours.

Camera
The 5MP module isn’t the best camera available but it is definitely one of the best in its class. In bright conditions the camera captures decent pictures but in low light conditions the camera did not perform well as the noise reduction algorithms just kill the quality. HTC has also added 'Zoe,' a feature that basically takes a short video and lets you extract frames or just use the video as it is.

The camera manages to capture 720p videos which actually turn out be good together with good audio levels.

Here are some of the camera samples. 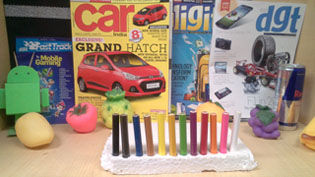 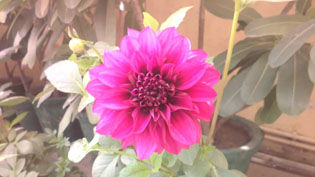 Conclusion
We would definitely not recommend the Desire 601 dual SIM at the price segment it is offered.  The smartphone does get high scores in the design and build department, but performance and features just bring down the rating for the smartphone. At the same price you can get your hands on much powerful and feature rich smartphones like the Lenovo Vibe X, Sony Xperia SP or the Nokia Lumia 1320.

HTC is doing right in manufacturing of their devices but has been placing them in the wrong price segments. We saw this earlier with the Desire 700 dual SIM as well which is priced at almost Rs.30,000