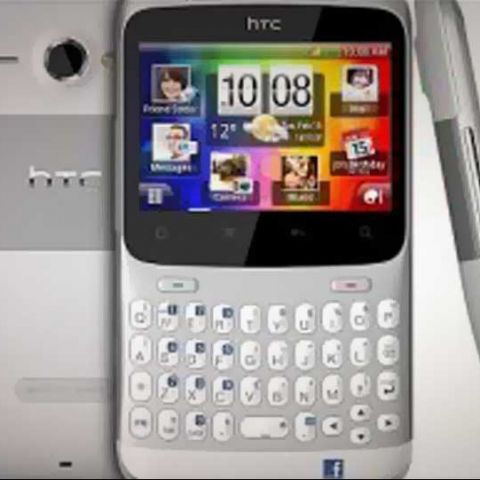 A touchscreen with a QWERTY keypad ï¿½ the HTC ChaCha certainly tries to cover all possible angles, but does the inclusion of multiple input methods guarantee a good device? A good looking and nice phone for an Android lover looking for a good keypad, beware of the paltry battery though. If you arenï¿½t a member of the "Droid or naught" regime, the Nokia E6 will serve just as well for around the same price.

A true middleman, the HTC ChaCha sits right between the Samsung Galaxy Pro on the lower-end and the HTC Desire Z at the top. It’s a QWERTY touchscreen – a combination that was once rare. However, whether manufacturers are really ensuring equal attention to usability of both touch and keypad-based functions is something we’re skeptical about.

Look & Feel
Straight off, the looks of the phone will catch your attention. While there is nothing very different, there are these subtle things that make a difference. The slight curve makes typing a lot more comfortable. The display and keypad are slightly curved towards each other, giving the phone a gentle curve reminiscent of a slightly curved boomerang. The little “F” button below the keypad lets you post on Facebook with just one click, without heading into the app or the web browser, we suppose social networking diehards would lament the lack of a Twitter and Google key, but really this inclusion is not really needed, though pleasant.

The build quality is generally good, even though it is mostly plastic. While the battery cover is a bit of a pain to open, the overall build of the phone belies the price. The phone sits well in the hand, and the slight curve inwards does help quite a bit. The review unit we received has a combination of white and silver colour. While it looks classy, we do have an issue with it getting dirty, no matter how hard you try otherwise.

[RELATED_ARTICLE]Features
The 2.6-inch capacitive touchscreen is paired well with a full-fledged QWERTY keypad. The display has a resolution of 480x320 pixels. Below the display is the touch panel with the Home, Menu, Return and Search keys. We are sure you want to know more about what the dedicated Facebook button does. Well,  to be honest, we were quite excited about that too. However, it turns out to be a bit of a disappointment. The button takes you to the “post an update’ box, and that’s it. To get the updates on the timeline, comment on others’ posts etc., you still need to head off to the full Facebook app. Weirdly, while this Facebook app has the Chat feature integrated, HTC insisted on installing a separate FB Chat app, and subsequently add to the clutter. Full marks to HTC for installing the latest OS though- Android 2.3. It is indeed a confusing sight to see phones still being launched with Android 2.2. In the past, the HTC Sense was given as the reason why the latest OS wasn’t adopted and updates were delayed. But not anymore, and the development of the Sense UI has improved both in terms of timing as well as performance.

An HTC phone without the Sense UI is as impossible as pigs flying! The UI has been updated specifically for this particular display, and yet manages to fit in almost all the elements (design, widgets etc.) into the new version.

Read more about the HTC ChaCha, its performance and our verdict, on the next page...

[RELATED_ARTICLE]Performance
While this phone isn't going to win any performance competitions, the 800MHz processor does hold up well for the most part. While we admit to having been spoilt by 1GHz and beyond processors, this 800MHz isn't very slow, until you load the phone, that is. It is common knowledge that a 1GHz processor will ideally be faster than an 800 MHz one, but for you as a user quite simply, the lesser grunt does become quite a hindrance when the phone is loaded with apps, data and with that the background services. The moment we load the phone with a bunch of contacts, media files, applications (some running in the background as well), the lag becomes more than visible. Flicking through the home screens, app list etc. just has that rough judder to it, but only when there are a lot of background apps running. The RAM is partly to blame for this, and the 512MB of that isn't enough if you want to open a lot of background apps.

ChaCha’s 2.6-inch display is pretty crisp, and was definitely better than what we had hoped. The brightness is the bright spot, and the crispness made text very much readable even on this small-ish screen. The resolution of 480 x 320 isn't a lot, but is enough for this display. Remember the extremely washed out display on the HTC Wildfire? The only little niggle is the visible gradation with most colours.

The most impressive bit is the physical keypad. While some may complain that it is a little too spongy in terms of key response, but it is usually about getting used to it. The key size is big enough for comfortable use, and that’s helped quite a bit by the decent enough spacing between the keys.

Call quality is quite okay, but in noisy situations, you will have this complaint that the earpiece isn't loud enough. The speaker has good clarity, but will start jarring at volumes above 70%.

The 5MP camera is surprisingly isn't as good as the Nokia E6 or the Blackberry Bold 3. The noise is more than visible in most shots, and that automatically ruins the colour depth. Basic settings you can tweak around with, but that doesn’t make a lot of difference with this very basic sensor.

We have always made it clear that we believe 1250 mAh batteries are not enough if you will use the phone for voice calls, messages, emails, web browsing as well as the full dose of social networking- all in a day. Point proved again, and the ChaCha barely lasts 12 hours. We discharged the battery a couple of times (the conditioning method) but that didn’t change the situation.

Our Take
For this price, you can also get the Nokia E6. While that isn't an Android phone, or doesn’t boast of any Facebook links, it does work well as a phone. Not that the HTC ChaCha doesn’t, for the most part. But the extremely disappointing battery does ruin the otherwise good phone. If the bad battery doesn’t matter you (you carry the charger with you etc.), then this is worth a check out. Else, the Nokia E6 with the Symbian Anna also offers the touchscreen keypad experience. And does very well on the battery life front as well.