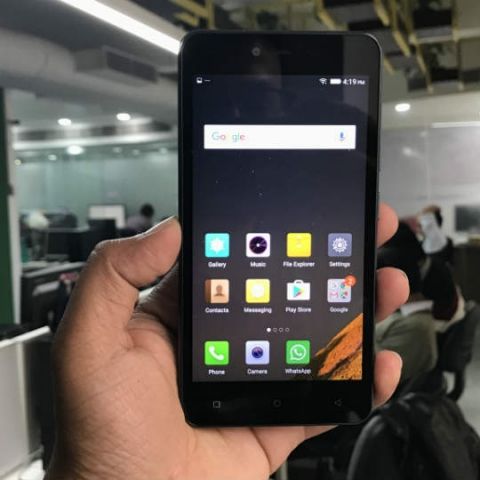 The Gionne P7 is a smartphone for budget conscious buyers. However, the device doesn't really match up to the competition. Even if you want a more easily accessible smartphone, the heavily compromised Moto G Play is a better option, while the Xiaomi Redmi Note 4, Lenovo K6 Power and Redmi 3S are much better options, too.

Three years ago if you asked me to recommend a phone under 10k, I’d tell to increase your budget to about 15K for a good Android experience. Today however, that isn’t the case. The top five smartphones under 10k, as of writing this story, that include the Redmi Note 3, Lenovo K6 Power, and Xiaomi Redmi 3S, phones that can take on much more expensive devices. All these phones compromise on certain aspects to maintain their price point, but offer a good overall Android experience.

Today I have with me the Gionee P7. The smartphone has a compact form factor, misses out on a fingerprint sensor and the specs on paper aren’t anything worth writing home about. Does the P7 deserve your attention or are you better off spending your money elsewhere? The Gionee P7 has a simple black front with the standard three capacitive buttons below the display, that aren’t backlit. The front facing camera is on the left of the ear piece. The micro-USB port is at the bottom and the top has the headphone jack. The right houses the power button and volume rocker.

Turn the phone around and you will be greeted by the curved glossy grey back that’s all plastic, but looks pretty good. The center of the rear panel has the smiling Gionee logo, above which rests the camera. The bottom of the back has the mono speaker.

You can remove the back cover to access the battery, along with the dual-SIM card slots and the micro-SD card slot. 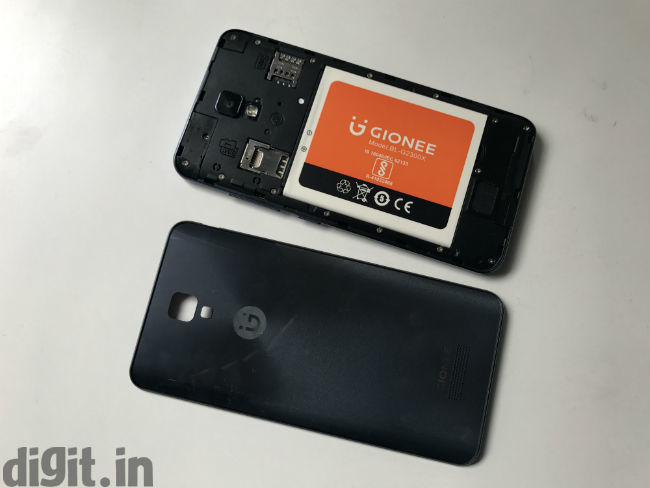 Lets get the worst out of the way - the viewing angles are bad and this affects the overall experience. Watch a couple of trailers, especially animated movies and you will realise what we are talking about. The colour reproduction is good even though it’s a bit on the warm side. However, there is a colour shift from angles.

You may not notice it at first, but the display is surrounded by thick black bezels. The best way to spot this is to download the Display Tester app and check out the dead pixel options. It doesn't make a big difference in regular use, though. It isn’t a deal breaker, but its presence will annoy some. 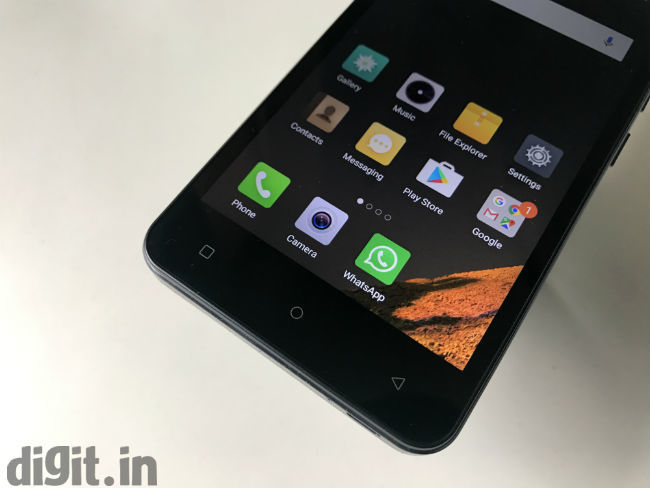 The sunlight visibility of the Gionee P7 is average. The display is very reflective, so it's visible, but only partly so. You'll have troubles in intense sunlight.

The Gionee P7 has a 720p display. We have seen a HD displays on devices like the Redmi 3S that works well. But the 720p panel on the Gionee P7 looks pixelated and washed out. Placed side-by-side with the Redmi 3S, you can make out the difference. The Redmi 3S looks crisper.

Moving to the UI, the Gionee P7 runs on Android 6.0 Marshmellow skinned with Amigo 3.2.0 UI. Amigo UI mimics iOS by giving you certain shortcuts and quick options when you swipe up from the bottom, and the notifications can be accessed by swiping down from the top. There is no app drawer.

Overall, the display could have been better for the price point and the UI is just about fine.

Moving on to the real world performance, the official website and press release state that the device is powered by a Quad-core 1.3 GHz. It isn’t mentioned which SoC is powering the device and one look at the benchmark scores will tell you why. 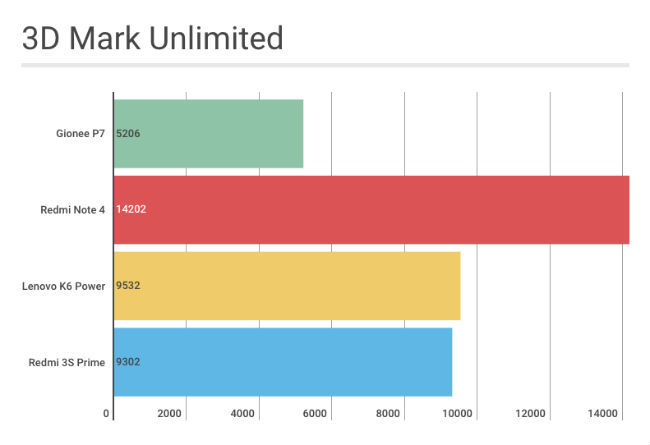 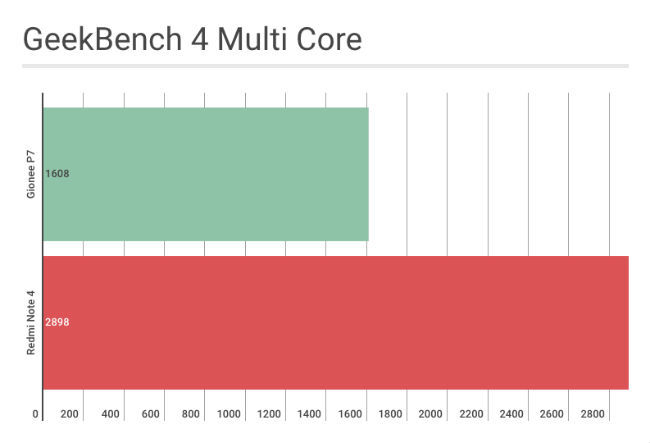 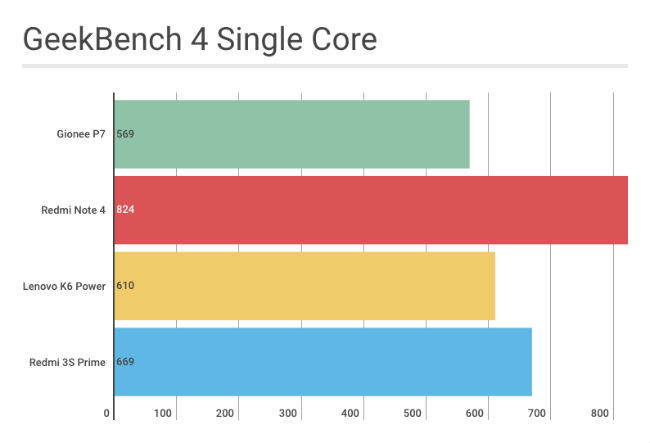 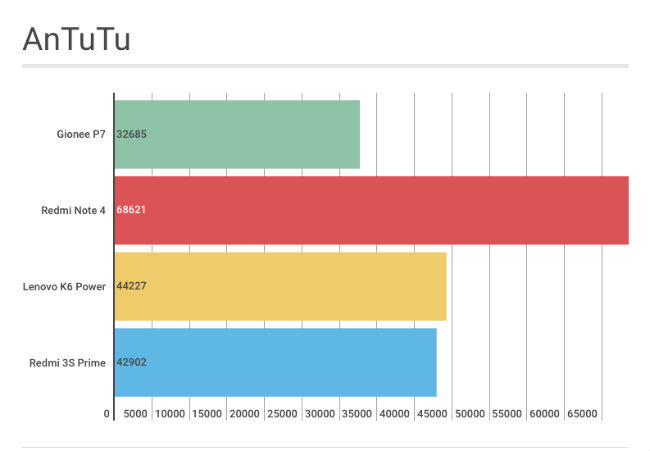 The smartphone ran all the everyday apps we threw at it, with some loading issues at times. There were times when the device lagged, but this was when you had more than 5-7 apps apps open in the background. These are non gaming apps we use everyday like Facebook, WhatsApp, Gmail, SMS, Call Log, Contacts and more. Multitasking does take a toll on the phone. Click on a folder on the home screen and you will have to wait for more than a second for it to open. Sometimes two seconds. 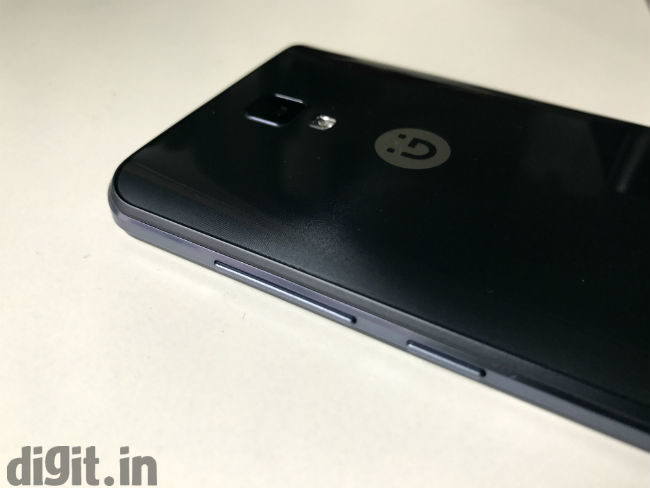 It doesn’t come with a fingerprint sensor either, and honestly if a smartphone maker compromises on the fingerprint sensor for some added horsepower then I’m ok with that. But that isn't the case here. The device has a mere 16GB built-in storage of which about 9GB is available to the user. There is the ability to expand up to an additional 128GB via a microSD card.

Even though the device works well for the absolute basic use-cases like texting and calling, even simple video viewing, it’s the annoying viewing angles hamper the overall experience there as well.

I played quite a bit of Asphalt 8 on the phone and the game works. It isn’t the best experience, though. There are frame rate issues and when there are quite a few race cars on the screen and you are attempting to take them down, the game lags. The ray of hope here is that the game isn’t unplayable. You can still play it, but it isn’t a stellar experience as most phones are capable of today.

The rear 8MP camera doesn’t produce great images when you compare it to the Lenovo K6 Power or the Redmi Note 4. Images lack details and noise levels are too hight in low-light situations. The front camera is average too at best. On the PC mark Work 2.0 battery test, the device lasts for 4 hours and 55 minutes, which is poor considering what other phones in the same price range offer. With the phone's limited capabilities for multitasking and gaming, you will get through a work day, simply because you may end up not doing much. But if you decide to, then I recommend carrying a power bank with you. Most of its competitors provide almost double the battery life. 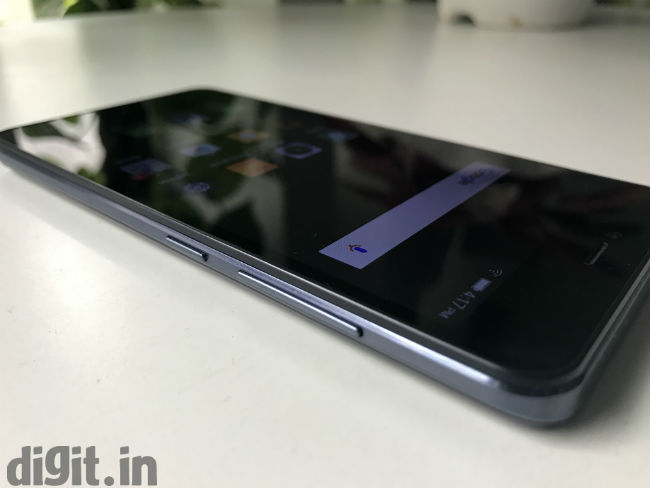 If you're looking to spend only about Rs. 10,000 on a smartphone, the Gionee P7 isn't the one to consider. The Xiaomi Redmi Note 4, Redmi 3S and Lenovo K6 Power are a few names that come to mind. You would be better off spending your money on those devices. However, if you can't get your hands on these smartphones, the Moto G Play is more easily available and makes for a better purchase.