The Gionee Elife S5.5 comes with an excellent looking design in the slimmest package possible and also features a bold hardware spec sheet. The UI isnt very well refined and there are some heating issues, but overall the handset is worth the price. The smartphone is a great buy if you dont have any qualms about the brand and after sales service, and it gives a tough competition to brands like Motorola and Samsung.

The handset is truly the slimmest smartphone as we haven’t seen any device as slim as the Elife S5.5. It even beats the Wham W1 Whiry by 0.3 of a millimeter, boiling down to a jaw-dropping thickness of just 5.5mm. 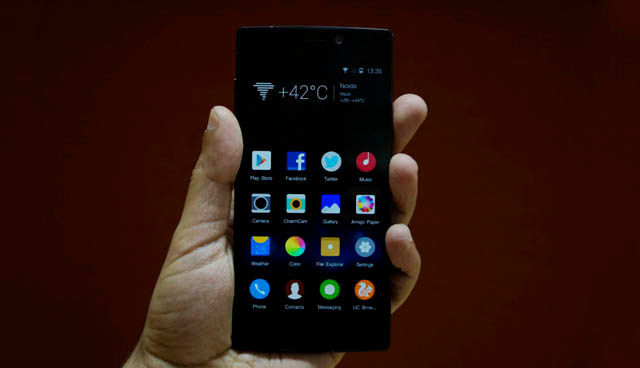 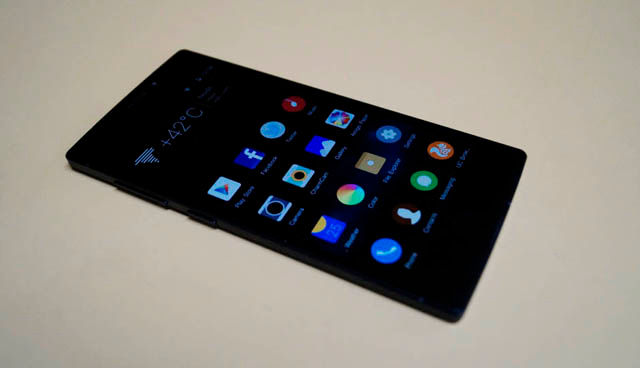 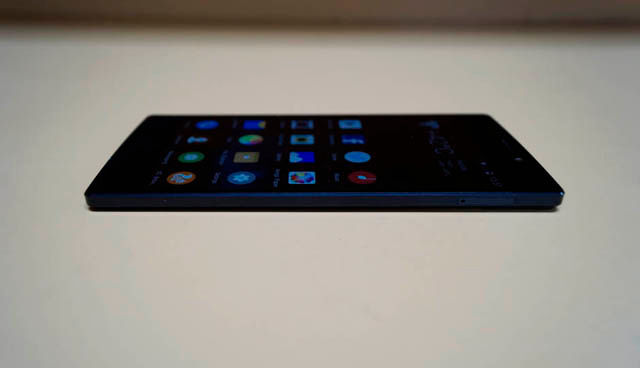 There is a metal frame in between which acts as a chassis for the smartphone and the front and back has a glass finish. The metal frame has sharp edges and the glass finish is rather disappointing as it makes the device slippery and prone to fingerprints and smudges. Overall the build quality feels very solid and stable and gives a premium feel. The front has the 5-inch Super AMOLED display, which is one of the best features of the smartphone. It is quite vivid and offers excellent viewing angles and even the touch response is quite smooth. 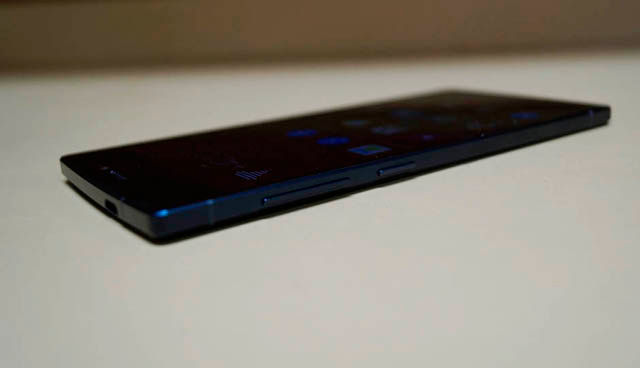 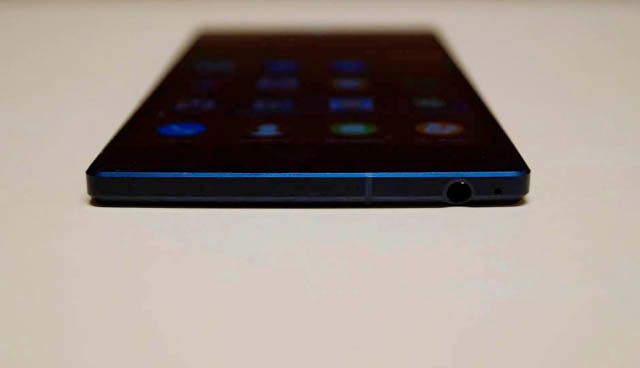 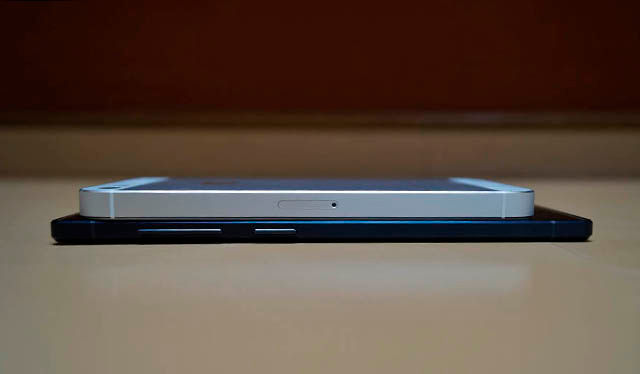 The right edge has the microSIM card tray which can be ejected using the provided ejecting tool. The left edge has the volume control and power/lock keys. The top and the bottom have the microUSB port and the 3.5mm stereo jack respectively. The edges also have small plastic bands which are primarily for the radio antennas. The back houses the 13MP camera in the top corner which slightly bulges out of the main body. The back also has the loudspeaker which is housed at the bottom.

In spite of the super slim design, the smartphone doesn’t feel fragile rather it offers a quite solid feel. The smartphone has been designed very well and personally we think Gionee has made a valiant effort with the Elife S5.5.

The smartphone runs on Android 4.2.2 with Gionee’s very own Amigo UI 2.0. For the ones who are familiar with Gionee smartphone, the UI has no separate app drawer instead all the apps are on your homescreens and the UI doesn’t allow you to add any widgets. You do however get one weather widget which converts into a clock when you lock the screen. Just drag the clock up to unlock the screen and drag the weather widget down to lock it. 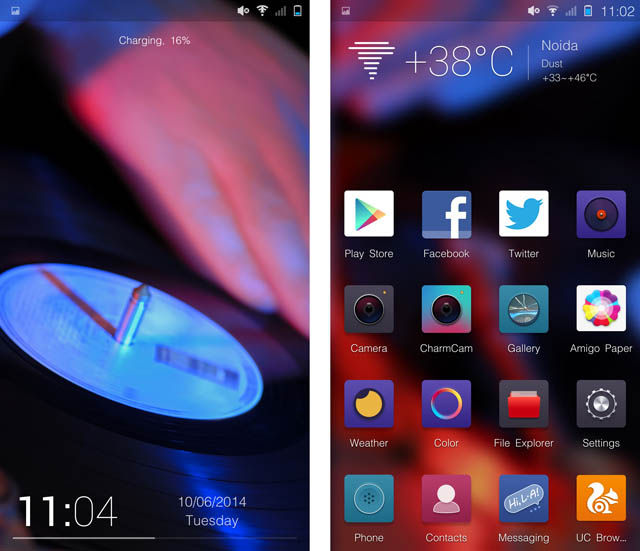 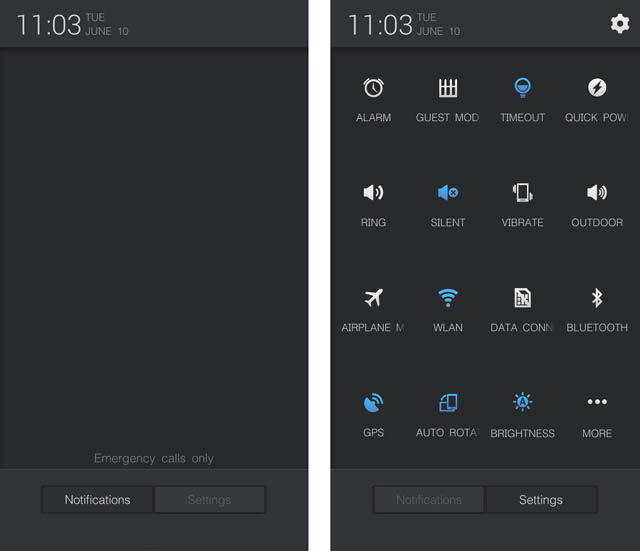 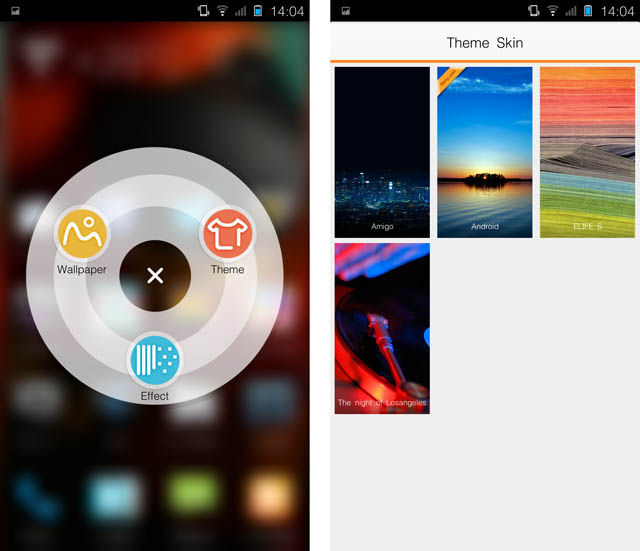 There isn’t any change in the notification bar and you get separate sections for your notifications and quick toggles. The UI also has a couple of themes which includes custom icons and wallpapers which look good on the vibrant display. There are some preinstalled apps and games on the smartphone, but nothing out of the ordinary.

The UI is fairly smooth and we didn’t notice any major issues while using the smartphone. Apps run smooth and multitasking was efficiently done thanks to the 2 gigs of RAM onboard. The UI isn’t entirely bug free though, there are instances where you see minor lags here and there. Hopefully upcoming updates will iron out these issues. We also noticed that the handset heats up on certain occasions, especially when playing videos and gaming.

In the synthetic benchmarks the Elife S5.5 was no slouch as it managed to score pretty decent results. The handset runs on a MediaTek Octa-core processor which sounds enough to power such a device. 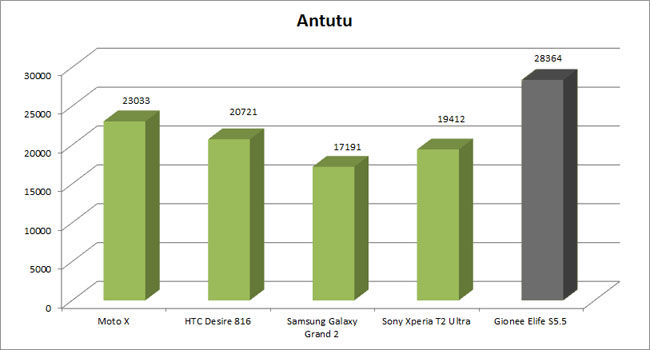 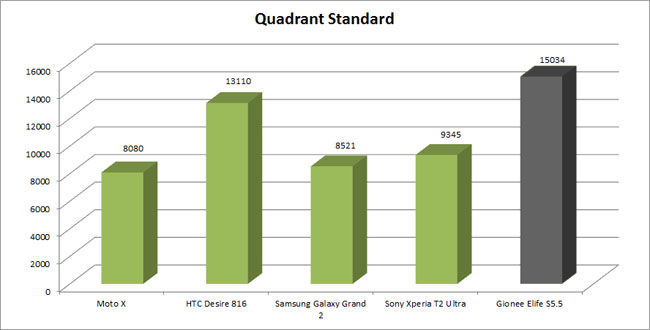 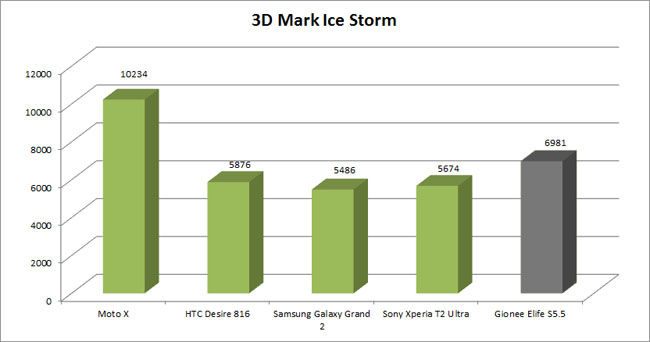 The results show that the smartphone isn’t so good with productivity tasks, but overall it performs very well.

The battery seemed to be an issue as our test showed that the smartphone is a power hogger. After running a full HD video for one hour, there was a loss of 30%. This means you can only churn out slightly more than 4 hours of full HD playback.

The camera on the S5.5 can shoot images of upto 13MP resolution and full HD videos at 30fps. There is also a front facing 5MP camera for making video calls or to take selfies. The primary camera has a fast focusing system and offers zero shutter lag which in real world works quite well. The camera UI is fairly simple to use and it has two modes, standard and advanced, which makes it easier to shoot. Pictures are fairly sharp, and details are upright. Colours produced are vivid and the level of details is pretty respectable for a smartphone camera. If you can put in a slight effort, you can get some amazing shots with the camera. Another thing we noticed was that the camera uses a fixed f/2.4 aperture giving shallow depth of field in the pictures, which gives a nice feel to pictures. 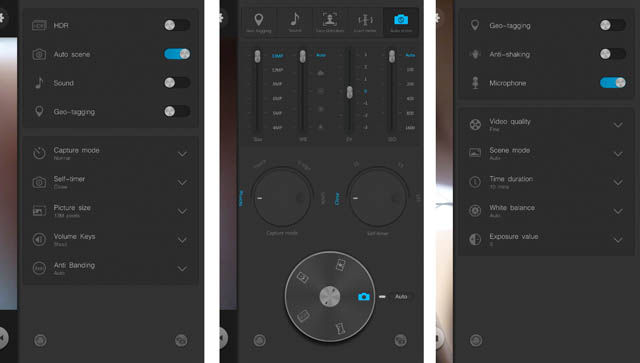 Low light conditions make the auto-focus go crazy and it keeps trying to focus on the subject even after the focus is correct. Pictures taken in low light are particularly low on saturation and lack details. And since the shutter speeds go down, you are left with a lot of blurs if shooting moving objects.

Here are some camera samples from the Gionee Elife S5.5 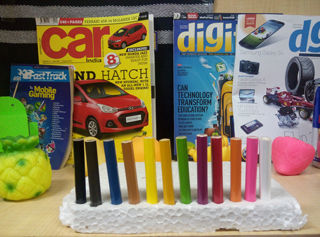 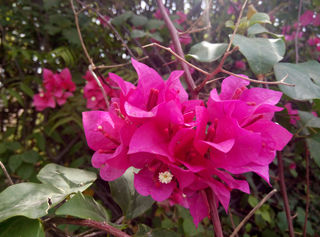 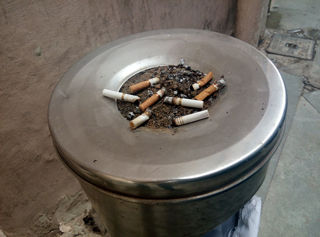 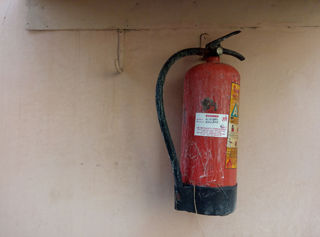 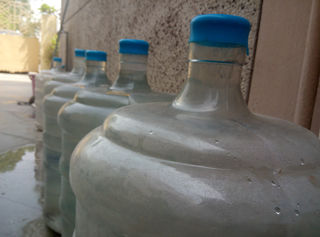 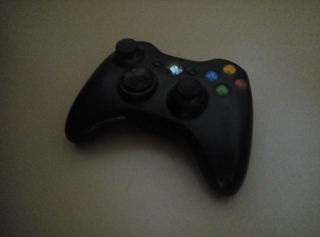 Videos can be recorded in various resolutions and you get a few settings to mess around with. Focusing is decent while recording videos and you can also use tap to focus on your subject. Audio recording in videos is crisp, although we wish it was slightly better in volume.

Overall the S5.5 has a worthy camera and can give some tough competition to smartphones in the similar range.

The smartphone can handle almost all video formats and we didn't notice any issue with the playback. The handset does heat up when playing movies which is one major concern. Music playback is also seamless and the music player offers a nice UI along with some custom equilisers for audio output. Overall the S5.5 is an excellent multimedia device.

Hardly anyone would think of buying a smartphone from a not-so-well-known brand, but to be honest the handset is surprisingly good. Yes after sale service is a major concern, and since there aren’t a lot of service centers, one might be extra cautious.

If you don’t worry about the badge on your smartphone, then this is definitely a good buy. Else the best option here is the Moto X or the Samsung Galaxy Grand 2.