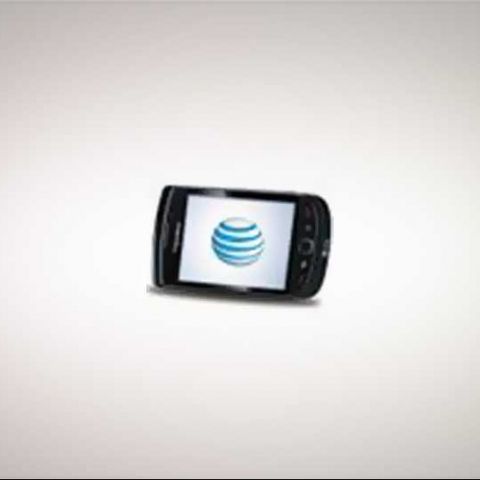 At Rs. 35,000, the Torch 9800 is quite expensive. It has a touchscreen and a full keypad and a host of other goodies that make it a very feature rich offering. However, some issues with build quality and the astronomical price make us hesitate before recommending it.

After the slew of capacitive-touch phones over the last year, it’s only natural that every manufacturer, (who hadn’t already), would want to hop aboard this wagon. Blackberry has been one of the late adopters. After all, catering to the business segment has less to do with fads and more to do with usability, right? A QWERTY keypad is a must for corporate users and touch-screen phones seldom feature those. We’re not talking about those pesky on-screen keypads, we’re talking about the good old hardware ones, in all their bevelled, intuitive glory. Enter the Blackberry Torch 9800, Torch for short. A hybrid – featuring both a QWERTY concealed beneath a vertical slider, and a reasonably sized capacitive touch-screen. 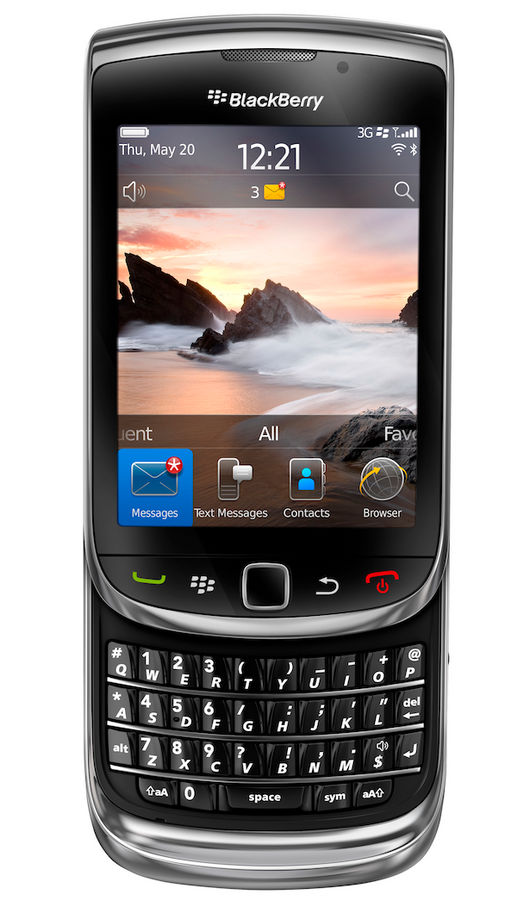 A QWERTY slider and a capacitive-touchscreen, the Torch 9800 has all possible input methods covered.

[RELATED_ARTICLE]At first glance, the Torch is a handsome device. Decked in a combination of matte black plastic and burnished chrome trim, the Torch is all sleek curves and gentle slopes. The front is a single slab of glass, surrounded by a rather wide bezel. Minimising the “Blackberry” moniker on the top could have yielded a slightly larger display. The Torch is heavy, on account of a vertical slider form factor, but despite its weight, it never feels reassuringly solid. This is, in part due to its size, and the slider that has the odd creak. The battery cover is thin plastic. The slider mechanism is solid, (albeit with minimal play), and the keypad underneath the slider is identical in design to the one on the Bold 9700 meaning key spacing is pretty good, and the sharp bevelling is a good cue that aids usability. The ringer mute and screen lock buttons are located on the top of the phone, on either corner, and are part of the bezel – slick design aesthetics.

Shockingly, (and this bears mention in a paragraph of its own), the covering on the buttons on the front bezel opened out while in use, exposing the actual contacts beneath. While this could have been a result of tampering before the phone reached us, and perhaps the part was already loose, but it’s unacceptable – especially for a flagship device. Below is a look at the damage. 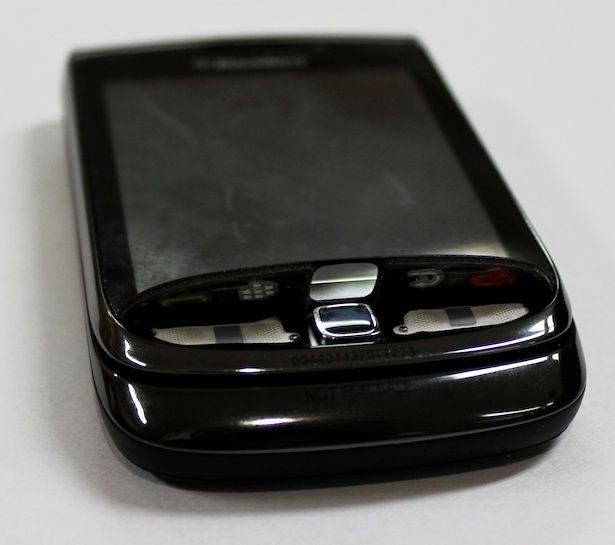 The surface of the buttons atop the bezel turned out to be a cheap plastic cover, and this simple opened up one day while in use. Rather shocking for a Rs. 35,000, made-in-someplace-other-than-China phone.

The display is a capacitive touchscreen and at 3.2-inches is the lower limit of what we consider usable. Our thumbs feel less clunky around 3.7-inch displays, but that would make the Torch even more bulky. Blackberry should have used a higher resolution display, and while for videos and such, the 360x480 pixel display suffices, for fine text the Bold 9700 is much crisper, owing to a higher pixel density.

Click next to read about the interface, and performance of the Torch

The Blackberry OS is clearly not intended for touch-screens, and Blackberry’s lack of expertise shows in a couple of places. For example, at times when scrolling down a call list to a particular number using the screen, all the numbers would get selected, making dialling impossible. We had to use the trackpad in such a case. This happened sporadically, but with enough frequency to be annoying. In fact, we also found a few problems migrating from a Nokia QWERTY that are worth mentioning, as differences, if not shortcomings. When writing out long SMS’ and emails, the Blackberry keypad is flawed but not in terms of layout as much as placement of functions. Full stops and commas should be the default function of a key, since these are used very often. Instead, they are a secondary function, activated by a press of the “alt” button. The QWERTY is a bit clicky, and feedback is hard.

Owing to the touchscreen, the Torch 9800 has a very nice on-screen keypad that can be oriented in landscape mode also. It’s sensitive, and accurate, in fact almost as accurate as Apple’s iPhone, although in this business, a miss is as good as a mile. Like the QWERTY, the on-screen keypad also has a flaw. When typing a number, you need to keep tapping the number icon, after each digit, since the display switches back to the alphabet keypad. With Symbian, you can easily hold down the key for an extra bit, to activate the secondary entry.

Volume buttons on the side are fairly evident, but they need some work on the comfort angle.

Overall, we found the touch interface pretty decent, and it’s always good to have multiple interface options, as long as you get them right. The Torch 9800 doesn’t have a perfect hardware keypad and buttons, and neither does it have a perfect touchscreen. However, it scores fairly well on both interface options. The trackpad is very sensitive, in fact, it tends to overshoot the mark when scrolling through options and menus, and one has to get used to it.

Blackberrys have always had pretty good antennas and the Torch 9800 follows this lineage. Signal quality was very good in zone one, spot on – great voice clarity. In zone two we see a near repeat with no disturbance on the line. In zone three as well, there was no disturbance on the line, and although voice quality remained very good, the tone of vocals changed slightly, nevertheless, a very good score. The loudspeaker has good clarity, but its volume is on the lower side, although still much better than the Nokia E72. Handsfree clarity is good, although vocals sound a bit thinner.
For music, the loudspeaker is pretty basic, and voices sound squeaky. The handsfree fares better, but it’s still not very good. The Torch 9800 has a very decent camera, in fact shots showed decent colour and fair contrast, but good focus. The flash is useful for around for a distance of around 4 feet. 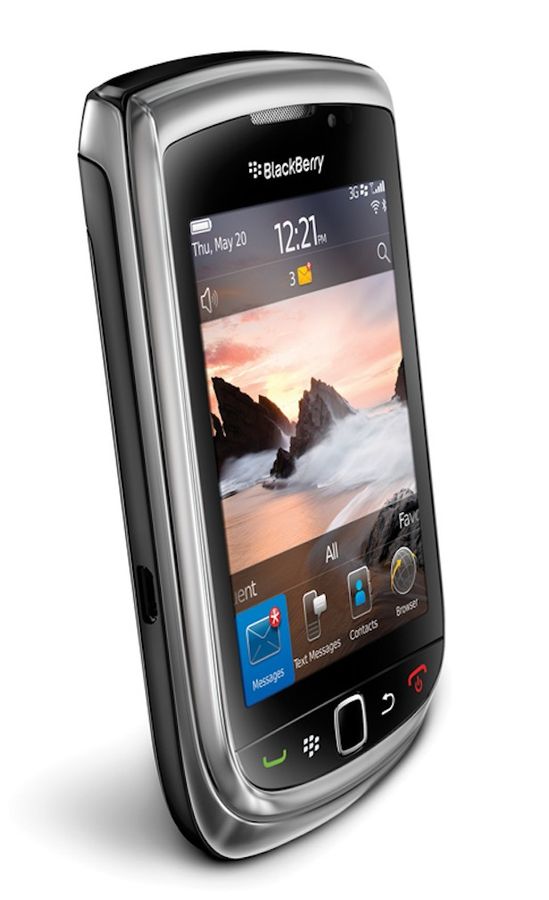 Here's a look at the Torch with the slider closed. It's an attractive looking cellphone.

The Torch is a quick device. Gone are the days when Blackberrys took forever to start up – the 9800 is pretty snappy, and the interface too has no visible lag. There’s a moment or so of extra delay when starting up the camera and that’s about it. Bluetooth transfer speeds were below par for some reason – the Nokia E72 is nearly three times faster in this regard. Battery life is decent, definitely more than expected for a 1270 mAh battery, although a 1500 mAh battery would be most welcome.

[RELATED_ARTICLE]At Rs. 35,000, the Blackberry Torch 9800 represents a change in design for Blackberry – capacitive touch-screens with full hardware keypads. And the 9800 is a good first effort – it’s got good hardware, is very responsive, has a very good touch interface that is surprisingly usable on the Blackberry platform. Call clarity is also generally excellent. Complaints – the QWERTY needs tweaking and repositioning of some functions, the shocker in terms of build of the strip over the buttons on the front bezel, and the mediocre display resolution. Wait, its price is another reason for complaint. Although most high-end touchscreen phones are in a similar price bracket, the Torch 9800 has a somewhat smaller display, and the lower resolution is a deal killer. We recommend it, but not at that price. At around Rs. 25,000, would be a really good deal.

BlackBerry Torch 9800 - A few nits prevent it from really hining

BlackBerry Torch 9800 - A few nits prevent it from really hining