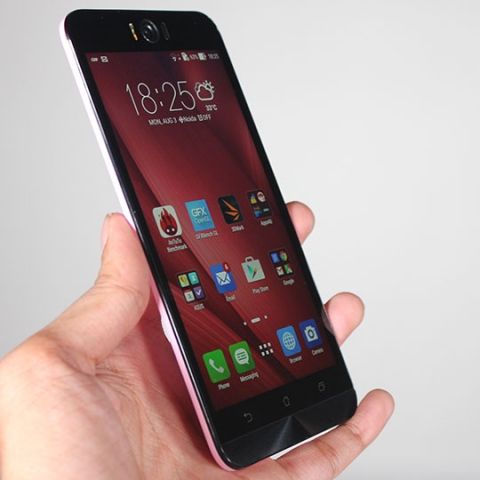 The Asus Zenfone Selfie takes good selfies indeed. However, with the powerful front camera, we expected even better. There is still a slight hint of pixelation in slightly dimmed fluorescent light conditions, although it does do a much better job than most other phones out there. Performance is smooth, and except for its large dimensions and the small volume keys placed at the back, there is no real ‘bad’ thing about it. At Rs. 15,999, it falls in near range of the Xiaomi Mi 4, the ZTE Nubia Z9 Mini and the Coolpad Dazen, all of which have a better form factor, along with similar performance and good camera performance. You may go for it, if you want a Zenfone with brilliant cameras on both ends. If ergonomics take the front seat, the others reasonably make more sense than the Asus Zenfone Selfie.

The Asus Zenfone Selfie arrived at our test labs in a ‘pretty’ box - bubblegum pink and white shades, heavily stereotyping the ‘selfie’ tag with the colour pink and Asus’s target consumer group. While that may not sit well with a lot of people if looked at from the generalisation point of view, chances are that the selfie-prioritising crowd will not mind the bubblegum pink back anyway. In fact, Asus has on multiple occassions said that the pink colour is targeted at the female consumer segment. 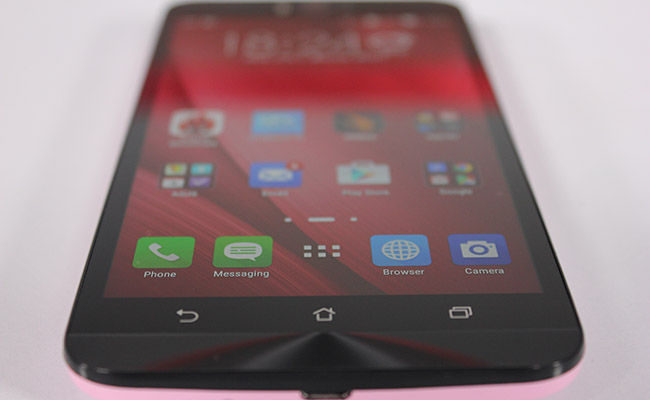 Out of the box, the Zenfone Selfie’s distinct front camera makes it stand out amidst the large variety of Zenfone 2s that are selling now. Apart from that, the design and form factor is pretty much the same, so it wasn’t a ‘new’ device per se. Here’s looking at the selfie specialist in detail.

Typically Zenfone 2 in design, the Asus Zenfone Selfie has the all-glass front with the matte plastic pink back, which tapers down to the edges. The volume keys are placed on the back, along with the rear camera. Both the build and the design are like the Zenfone 2, so there is nothing new to add here. The lower bottom part of the front has a thin striped metal panel, which does nothing except add a bit of metallic accent to a device which otherwise has no metal on it. The device, however, is too big for one-handed usage. It’s tapering edges does make holding the device convenient, although the large form factor, coupled with the rather small volume keys placed on the back, doesn’t aid its case. In short, the Zenfone Selfie is almost exactly the same, except for its performance, camera and battery. Read more details on its build, display and UI in our detailed review of the Asus Zenfone 2. 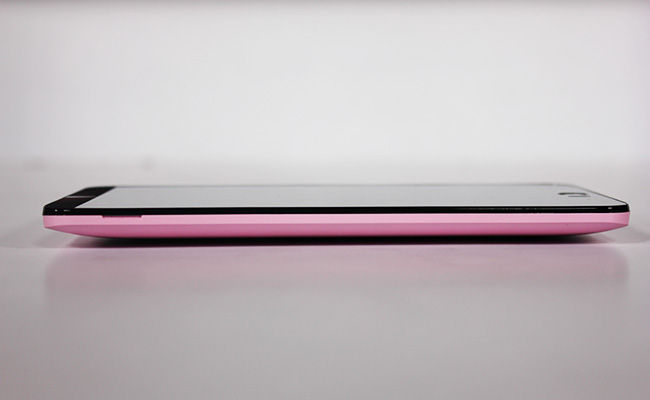 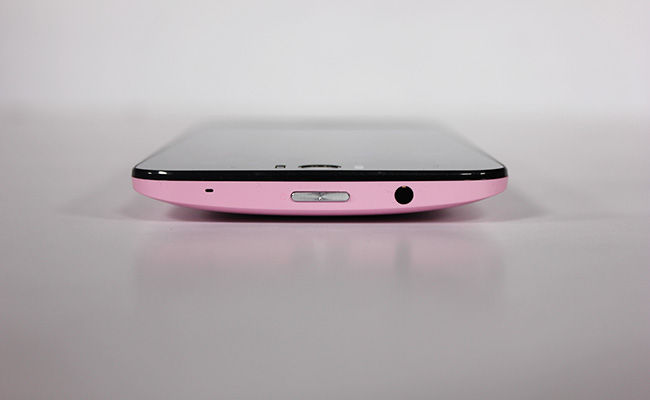 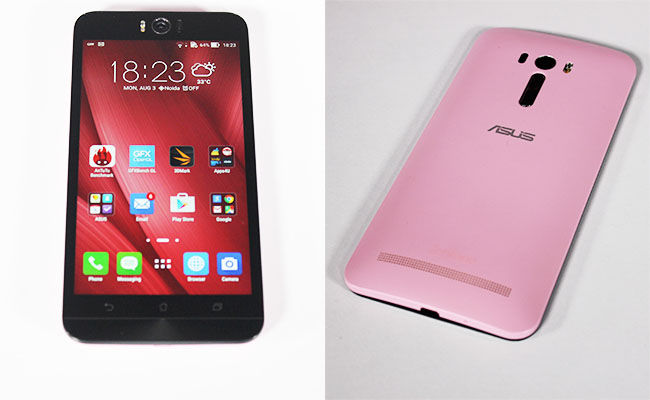 Performance
The Asus Zenfone Selfie is powered by a Qualcomm Snapdragon 615 octa-core SoC clocked at 1.7GHz, along with 3GB of RAM, 32GB internal storage and Adreno 405 GPU, on the unit we received for review. It comes preloaded with Android v5.0 (Lollipop), with Zen UI running on top. With the ample amount of RAM, the Zenfone Selfie has no significant lags. Regular usage and multitasking jobs are handled satisfactorily by the phone, along with good gaming performance. There were a couple of hiccups when it came to multitasking for a long duration, but minor ones like CSR Racing freezing for a couple of seconds with music playing and applications downloading in the background. Rendered graphics were pleasant to look at, and there is no issue of heating. This is where the Asus Zenfone Selfie balances its act well - it is not a phone that just takes good self portraits, but is an able performer too. Here’s how it performed in synthetic benchmark tests:

Processor and battery optimisation is neatly balanced, although there is throttling of the GPU if you try gaming in Power Stamina mode. Apart from that, the Zenfone Selfie retains the Zenfone 2 (4GB)’s characteristic of being an excellent performer. Call quality and signal reception is steady, and in-call audio is distinct too. Having praised all of these aspects, however, I am not a fan of the Zenfone Selfie’s audio driver. The audio lies on a flat sound range, and the bass is indistinct (as seen in a lot of phone speakers) and sounds loose. The compact arrangement of an audio track is amiss, and this is the only field where the Asus Zenfone Selfie truly lags. However, chances are that you use headphones to listen to music anyway, and better headphones in the market do manage to fairly make up for the mis-arranged audio in Zenfone Selfie.

Camera
The Asus Zenfone Selfie houses two 13-megapixel cameras - on the front and at the rear. Both are equipped with a Toshiba T4K37 CMOS backside illumination sensor, with five-element Largan lenses on both the cameras. The rear camera features an f/2.0 aperture, while the front camera has f/2.2 aperture along with an 88-degree wide angle view. There are dual-tone flashes on both ends, completely justifying the name of the phone. 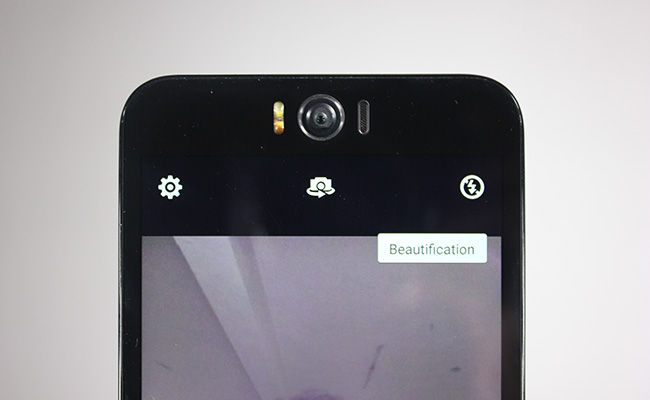 The rear camera also has laser-assisted focusing, and images are quite clear and well balanced in colour. The Zenfone Selfie’s rear camera performs really well in low light situations too, with its internal sensor optimisation increasing sensitivity to allow higher luminance in photographs taken. It is the ‘selfie’ camera, which stands out in this phone. Yes, the front camera is stellar, and is possibly the best out there presently. However, I expected more. There is a hint of soft focusing, along with slight aberration in background blurs that you would be expecting to see in lesser-specced front cameras. At optimum lighting, the Asus Zenfone Selfie takes perfectly distinct self photographs. Focusing, however, is sluggish in the front camera.

The laser-assisted autofocus performs smoothly, although the 0.3s focusing time stated by Asus didn’t happen, even in well-lit, standardised conditions. More often than not, it took nearly one second to focus on the object in the foreground. The shutter was smooth and steady, without any lags. Overall, the Zenfone Selfie’s camera is the perfect highlight to its good performance capabilities.

Battery
The 3000mAh battery is well optimised for real world usage. Although it turned out merely 5 hours and 50 mins in Geekbench’s battery test, it last 9 hours and 6 minutes in our battery test. It sees out an average 12-14-hour day’s usage with light gaming such as Subway Surfer, streaming music and watching occasional videos, with about six to seven percent battery left. After it fell down to 10%, I had switched on the Stamina mode, which helps the phone last a few extra minutes. The battery drain during games or watching films is not unnatural, with a 22% drain in 40 minutes of continued gaming, although it is a bit on the higher side, in comparison to the rest of the phone’s power consumption.

BOTTOMLINE
There’s nothing wrong with the Asus Zenfone Selfie, really. It continues Asus’ trend of bringing out a new Zenfone 2 variant altogether with every tiny advancement or change in feature, rather than providing additional options with the phone. It takes good selfies indeed. However, with the powerful front camera, we expected even better. There is still a slight hint of pixelation in slightly dimmed fluorescent light conditions, although it does do a much better job than most other phones out there. Performance is smooth, and except for its large dimensions and the small volume keys placed at the back, there is no real ‘bad’ thing about it. At Rs. 15,999, it falls in near range of the Xiaomi Mi 4, the ZTE Nubia Z9 Mini and the Coolpad Dazen X7, all of which have a better form factor, along with similar performance and good camera performance. You may go for it, if you want a Zenfone with brilliant cameras on both ends. If ergonomics take the front seat, the others reasonably make more sense than the Asus Zenfone Selfie.