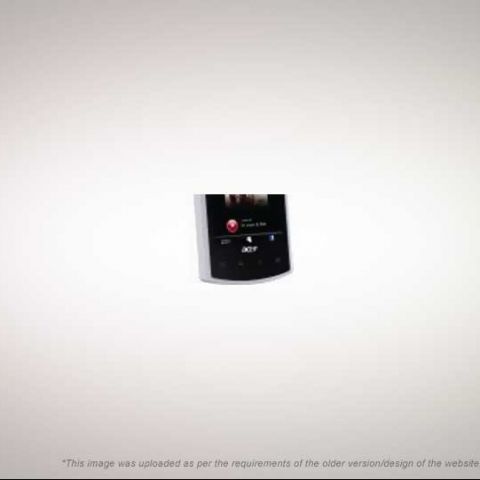 The Liquid, like many other devices of its time faces an identity crisis ï¿½ good hardware/could-be-better platform and the resulting mediocrity. Priced at Rs. 24,900, it must be said, the Liquid needs a few firmware upgrades to niggle out some of the unexpected quirks we ran into ï¿½ something in stark divergence to the polished image Acer would obviously wish it projected. Itï¿½s a bit pricey to merit approval anyways. 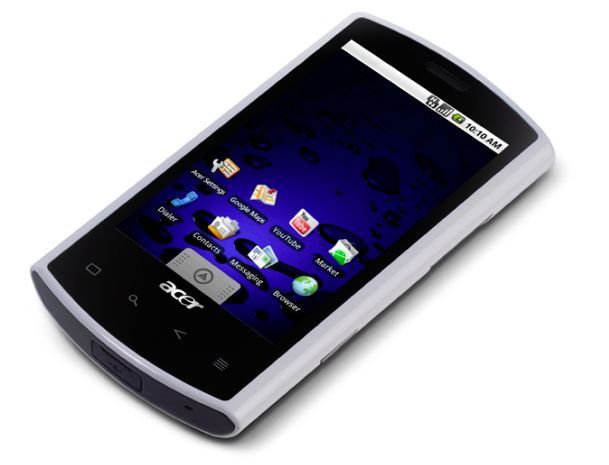 Not quite as fluid as we’d hoped

Acer’s Liquid created quite a stir upon arrival. Unfortunately, it’s living proof of the adage first opinions are not necessarily the last. Let that be the solitary spoiler. The handset is well packaged and the accessories while adequately encompassing have mediocre build quality. For example, despite our genteel handling, we managed to tear the foam pads while putting them on to the earphones – the foam just ripped from the seam – something we’ve not seen much of and is quite unexpected at this price point.

She’s got the look

The handset itself is quite well sculpted with a curving top and base breathing life into a basic design. The white / black colour scheme is spot on – the phone is pure white everywhere except for the top and bottom and the front that is given a translucent black finish that blends the bezel and screen into a single plane – the only interrupt here being the bold “acer” moniker above the function symbols marked on the surface and of course the earpiece that is located above the 3.5-inch, capacitive-touch display. The battery cover is plastic – but well built, and body of the handset is curved at the sides making holding it comfortable, but you need largish hands. The flush-fit buttons on the sides of the device have a silver lacquer finish that is at odds with the white/black theme. These buttons do not exude great feedback and this coupled with their small size makes them somewhat un-ergonomic. The camera credentials aka five-megapixel is emblazoned on the rear, but misses a flash unit – surely a necessity surely, no?

There’s a mini-USB port on the bottom, concealed beneath a pretty good flap and a 3.5-mm jack is conveniently located on the top. Juice is provided via a 1350 mAh battery that is can do a day of sporadic surfing and three hours of call-time – good enough for most people. The memory slot requires removal of the battery, so not a hot-swap design in the true sense of the term. One of the cool things is the use of a translucent black material on the top and the embedded notification system – any SMSs or missed calls you receive will flash with a white backlight. Overall the effect is very cool, since logos for SMS and call are used.

Interface wise, the phone is pretty snappy, although the camera lags. The 768 MHz, Snapdragon processor is nigh impossible to slow down, though this is not always evident from the interface. Based on Android 1.5 (Cupcake) the Liquid feels, at times, anything but its namesake and even using gestures on the main screen are not absolutely error-free. Sure, it’s a world away from Nokia’s pathetic resistive-touch gesturing system, but it’s equally far away from Apple’s trendsetting benchmark. I feel Android is the right way to go – it’s the platform for the connected person – widget-heavy, lots of connectivity options and best of all – seamless integration with various Google services including the search, calendar and maps; though to say there are kinks to iron out would be an understatement.

There’s a basic version of an office suite that allows viewing of pre-created documents, spreadsheets and presentations – you need to purchase the pro version that allows creation and editing of all documents. RoadSync Mail and RoadSync Calendar are provided for those who want push-mail functions or if you prefer not using Google Calendar. Most of the extra applications including the office suite and the RoadSync tools are provided by DataViz that is a well known solutions provider for cellular devices.

Being Android-based means you’re subject to its set of quirks as well – no silencing an incoming call for example – something that will annoy people migrating from the Jurassic yet call-friendly Symbian interface. There are other noticeable quirks as well. The on-screen QWERTY keypad isn’t as responsive as we’d like, and nowhere near as seamless as the iPhone – you’ll frequently hit the wrong keys – unless you’re willing to concentrate a little harder and use it in landscape mode – where the keypad is a more spaced out. There were also some weird problems – for example, when disconnecting a call you expect the backlight to automatically brighten – bringing the display into view – this doesn’t happen, the backlight is just perceptible enough to trace the disconnect button on-screen. Then there’s the problem with the proximity sensor – this is supposed to switch off the screen in close proximity when on a call – obvious – you wouldn’t want your earlobe disconnecting a call. This works, but at times the backlight doesn’t kick in when the device is moved away from your person – so you cannot cut the call without having to switch the display on. Then there was a time when the call disconnect control would not work – it was visible, brightly backlit, but jabbing at it for a whole minute proved futile. In the end, a quick flip-up of the battery achieved what our fingers, and the phone could not. 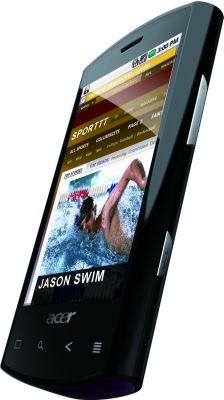 The loudspeaker clarity is pretty hopeless and the device vibrates with the loudspeaker turned on and the voice is jarring. In-call volume on the earpiece is also pretty low and at times the other person will need to speak up, or you’ll miss what is being said. The headset provides higher volume and slightly better clarity than the loudspeaker/earpiece. Music playback quality is acceptable, nothing more, though better earphones should yield better results. A 2 GB microSD card is bundled with the handset – we’d have loved 8 GB – which is the norm for high-end smartphones.

The display is a highlight – crisp, great text visibility and good colours. Although the technical spec lists it as a 262,000-colour screen we could notice no deficiencies of any sort, videos and any sort of web browsing is a fun experience – although we wish for slightly more precision to the touch-based interaction. The camera feels like an afterthought, for not only is the quality strictly so-so, but the camera button is pretty useless – pressing it at times evokes a sudden click, when a half-press is supposed to activate the focus.

If we were to list this device’s pluses these could be categorised into hardware and software – good processing clout and a good display meets the OS of the future. Unfortunately, its minuses have also rear two heads – on the hardware front, we’d like a better camera with a flash, we’d also like better earphones, a better loudspeaker and a better antenna for improved in-call clarity. On the software front, while Android is replete with connectivity options, it screws up big time with the basics – a smartphone, irrespective of the bells should be a good phone and Android has problems a mile wide when it comes to meeting this end. Obviously, it would require little effort to better this, and we’ve no doubt this will happen, for Google are nothing if not smart/quick learners. Android 2.1 (Éclair) is not going to address a few of our complaints though, and thanks to Microsoft’s secrecy, we won’t know if WM7 is a positive step up from WM6.5 that had handset manufacturers innovating with their interfaces to cover loopholes. Till then, the Liquid, like many other devices of its time faces an identity crisis – good hardware/could-be-better platform and the resulting mediocrity. Priced at Rs. 24,900, it must be said, the Liquid needs a few firmware upgrades to niggle out some of the unexpected quirks we ran into – something in stark divergence to the polished image Acer would obviously wish it projected. It’s a bit pricey to merit approval anyways.