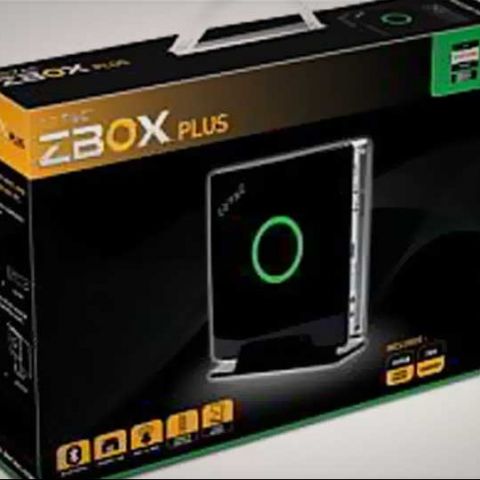 Pricing is on the higher side considering the Intel ID80 Plus board which gives a similar performance, except when it comes to casual gaming. A difference of Rs. 4,000 is still quite a lot specially in this price concious segment. In fact we felt that the Rs. 19,999 price for the ID80 was on the higher side, so that means the AD04 Plus should certainly sell at a lower pricing. You can go for the HDD-less version called the AD04, which is available for around Rs. 16,500 if you can arrange for a laptop drive.

ZOTAC has always been very aggressive in the compact form factor PC business. We tested its Intel offering – the ZBOX ID80 Plus – last month. This time we have got the AMD counterpart sporting the successor to AMD's Brazos E350 processor. The ZOTAC ZBOX AD04 Plus sports an AMD E450 APU which houses the newer Radeon HD 6320 graphics. The AD04 is an update to the AD03 which we had seen last year.

Design and Features
Design wise the ZBOX looks like any other ZBOXes we have tested in the past. It has the green coloured circular orb on its front black glossy face. The vent for the fan section is located on the top whereas the front and rear portion have the battery of port connections. In the front you have a single USB port, an SD card slot and the audio and mic jacks. Power button is located at the top. Coming to the rear side and starting from the top you have - the Wifi port, two USB 3.0 ports, a LAN port, two USB 2.0 ports, a DVI port, an HDMI port and the power jack.

Build quality is quite sturdy even though its a plastic body and we liked the stand that ZOTAC have provided so that the system is held vertically in place. The glossy surface is a finger-print and dust magnet.

It houses a dual-core AMD E450 APU clocked at 1.65 GHz which is just a 50 MHz rise from the E350. There is 2GB of DDR3 RAM with the option to take it upto 8 GB. A 320GB hard drive running at 5400 RPM is housed within. Graphics solution is provided by the on-board HD 6320 within the APU. The graphics unit has around 4 Raster Operator units (ROPs) and 80 unified shaders with a 129-bit bus width. It supports DirectX 11.

It also bundles in quite a lot of goodies such as a WiFi antenna, a Windows Media player remote control and an IR receiver for the same.

ZOTAC has added a lot of colour to the otherwise dull UEFI BIOS, having a honeycomb-like design was the common wallpaper for the BIOS.

Performance
As expected, the performance from the ZBOX is not very impressive thanks to the low power processor. It was definitely found to be better than the older generation AMD E350 processor.

DivX encoding was slightly slower at 132 secs (for encoding a 100 MB file from VOB to DIVX) when compared with the ID80 Plus speed of 129 secs. But the AD04 was faster than AD03 when it came to this task.

HD videos were played back flawlessly. The CPU consumption only spiked in the first couple of seconds of starting the HD movie to above 50 per cent, but then it tapered down and hovered in the 15 to 20 per cent zone, which is quite decent when compared to AD03. But the CPU consumption on the Intel D2700 never crossed always remained under 10 percent mark after the initial spike. We did noticed frame skipping, if we forwarded or rewind a playing HD stream which lasted for a couple of seconds before playing back the stream without any issues. So if you are watching HD content, be aware of this. Also it has support for HDMI 1.4a which implies support for 3D content.

Wi-Fi connectivity is not an issue once the drivers are installed. It also support Bluetooth v3.0 so you can wireless transfer files from your bluetooth devices to the ZBOX and vice versa. The Windows Media Centre remote is quite well built with responsive buttons.

Verdict
ZBOX AD04 is not positioned as performance beast and when it comes to regular usage such as accessing the internet, watching HD movies, doing office-related work on word or excel documents, it delivers the goods. The compact form factor, WiFi connectivity, USB 3.0 support, Windows Media Centre etc. makes this a very good option for use as an HTPC. Gaming is possible with older games at lower resolutions with settings such as AA and AF off. When compared to the AD03, this ZBOX offers decent improvements, but when compared with the Intel based ID80 Plus, we feel both are equally good.

Pricing is on the higher side considering the Intel ID80 Plus board which gives a similar performance, except when it comes to casual gaming. A difference of Rs. 4,000 is still quite a lot specially in this price concious segment. In fact we felt that the Rs. 19,999 price for the ID80 was on the higher side, so that means the AD04 Plus should certainly sell at a lower pricing. You can go for the HDD-less version called the AD04, which is available for around Rs. 16,500 if you can arrange for a laptop drive.