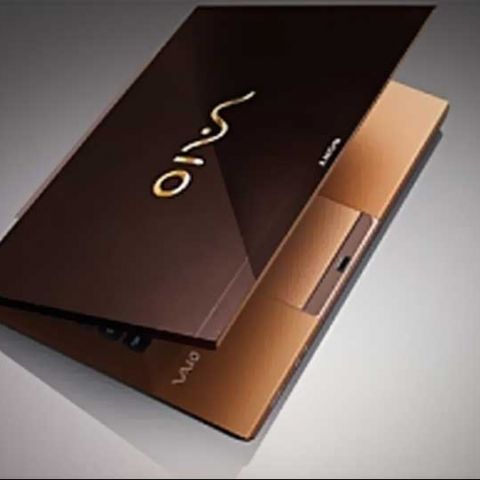 To put it mildly, the Sony Vaio S- series (VPCSA35GG/T) has looks that stand out in a crowd. A combination of good performance and good build is more than enough to entice anyone who is looking to buy a slim laptop. We have run out of words to express how happy we are with the matte display! However, a very disappointing battery life and a price tag that is slightly on the higher side gatecrash the party.

What we have here is a laptop that looks pretty impressive on the spec sheet - Intel Core i7, 6GB of RAM, a 750GB hard drive and dedicated graphics - AMD Radeon HD 6630M (1GB RAM) and the integrated Intel HD 3000 graphics. However, what dresses it is what really catches the eye - Glossy Brown, and that too multiple shades of that. So much so that the lighter one actually comes very close to Gold! But, does whatever glitter really gold? Let us find out.

Look & Feel
Isn't this everything you want from a laptop? It isn't an ultrabook, in simpler terms means more power. But it still manages a form factor very close to that. This Vaio has a similar thickness to the Samsung Series 5 ultrabook we reviewed recently. Fish it out of the box, and the dark chocolate brown color with the glossy finish will make you either check out your reflection and /or make you wince in exasperation. We don’t like glossy finish on gadgets, and this one just walks the same path - scratch, fingerprint and dust magnet. Open the lid, and you now see a different shade of brown, almost bordering on Golden! This holds true for the bezel around the display as well as the area around the keypad. While the bezel has a clean look, there is a textured finish around the keypad as well as on the touchpad. Lots of hardware keys here - drive eject, graphics switching slider and a bunch of dedicated keys that take you to the Vaio Assistance suite and the Vaio control centre. To keep the shape edgy, the power key is also of a unique design.

All ports are on the right side. You will get three USB ports, one of which is a USB 3.0 port, card reader and HDMI out as well. There is the well sculpted optical drive on the left side, and you might not notice it there because of the MacBook-esque placement of the eject key above the keypad. The 3.5mm headphone jack is placed just above the optical drive.

No vents on the sides, but the major outlet are on the rear side, below the display. However, we noticed a major design flaw with this. Thanks to the chunky design of the hinge, the vent space is severely compromised when the display is completely tilted back. Trust us, people do tilt the display that far back, and even we do it. What that does is heat up the machine a lot quicker, particularly if you are on the dedicated graphics mode. Within 20 minutes of being switched on for a bit of web browsing and some You Tube videos, the cooling fan was growling like the way it did on the older gen Xbox consoles - time for take-off!

While the build quality is worthy of a laptop this expensive, we don’t think everyone will appreciate this colour. This laptop is also available in a conventional black coloured finish, and we suggest you consider that. However, you will need a cooling pad for this for the most part, since this becomes very warm thanks to the flawed vent placement.

Features & Performance
We have said this before, and we will say it again - this Vaio laptop looks very impressive on the spec sheet. Intel Core i7 clocking at 2.8GHz with the boost taking it up to 3.5GHz, 6GB of RAM, a 750GB hard drive and switchable graphics. You would expect this to blitz the competition so to say, both in terms of real world performance as well as benchmark scores.

First off, the Vaio doesn’t feel as quick as the spec sheet would suggest. This is primarily due to the fact that Sony preloads this machine with a whole bunch of crapware, mostly a bunch of its own applications. Even when using Windows like you would on a day-to-day basis - web browsing, document editing, watch a movie etc., this one will feel slower than it should be. Apps take time to load, and even folders open with a bit of a lag. We tried to solve the issue by removing all non-Windows apps from the startup list, and it did make a tad bit of difference.

During the testing process, the preloaded Windows on the Vaio crashed. We tried installing a clean version, but that didn’t happen, since this machine refused to boot from a USB drive. We fell back on the restore discs that came with the machine. The reinstall process went smoothly, until we realized a weird issue with the Windows install - it was a 32-bit version, even though the machine comes with a 64-bit OS preloaded! We don’t really know how Sony could have missed this, but then again, the restore discs are unique to this very machine and mix-up can’t really be blamed.

Most of these slowdown issues cleared up when we ran a clean installation of Windows on the machine, this time installed via a DVD. The snappiness of the response was a complete change from what we had experienced with the Sony installed version of Windows.

We have a comparison of some of the benchmark scores of the Sony Vaio as well as the Dell XPS13. Both machines have the exact same box price, but the difference in performance is quite evident.

Next Page: Read more about the features, performance and the verdict...

The 13.3-inch display (WXGA 1600x900 pixels) is an absolute delight, and goes on to prove that there really is a God! The matte finish is a welcome change from the reflective ones we have seen on laptops, and should be a painless experience to use in most scenarios - office with a lot of lighting or even outside with possible sunlight behind your back. The brightness is impressive, but could have done with a bit more depth to the black levels. This is the only real shortcoming in an otherwise flawless movie watching experience. The speakers are quite good as well, and this machine could do well as a multimedia consumption device.

The keypad is what is also known as the Chiclet style one, and is quite similar to the one I have used on the MacBook. The key size is exactly the same for the most part, but the key press response isn't as chunky as the MacBook. There is a soft sound to the Vaio’s keypad, something that doesn’t sound well built. However, no flex or depressions in the keypad, even when forcefully pressing a key just to see if there is any movement!

Battery life has turned out to be a huge disappointment. On the dedicated graphics mode (Also known as Speed), the battery ran out of juice in 58 minutes. We tested the battery life with the on-board graphics (Also known as Stamina mode) and it ran out completely in 1 hours and 26 minutes. Very disappointing. However, the real issue was with the switching app. We moved the slider from Speed to Stamina mode, and the pop-up confirmed the action. However, a couple of seconds later, an error message popped up warning us that there is some app running in the background that is preventing the graphics switching. We are running the updated ATi drivers, and that shouldn’t be an issue. Ultimately, we had to manually switch the graphics to the Intel HD3000 ones to complete the second battery test.

Our Take
While the benchmark scores clearly show that the Dell XPS 13 is a better performer overall, we would definitely stuck our neck out and say that the Vaio could have been equally good, had Sony not mucked up the Windows install. What this machine deserves is a clean Windows install, before it can really show off its true colours. The matte display is worth a million bucks, if you ask us. Not a bad deal for someone who wants an extremely sexy (though some may say there is too much bling) desktop replacement, but for someone who wants a performance laptop out of the box, the Dell XPS 13 would seem a better deal.