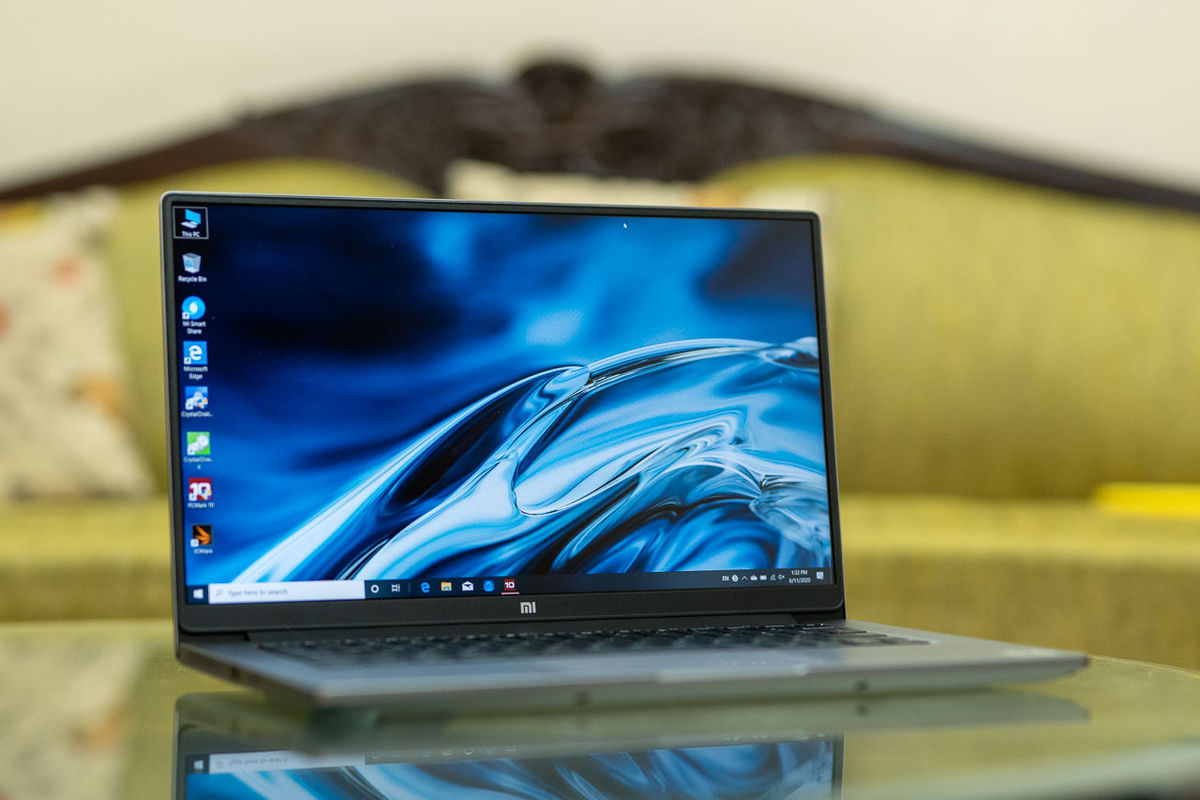 The Xiaomi Mi NoteBook 14 Horizon Edition is the company's first laptop to be launched in India and it comes out the door swinging hard. The hardware in this machine allows it to deliver great in-class performance, while also giving 6 hours of battery life on moderate daily usage, a brilliant display for watching movies and getting work done. Where it loses points is with the keyboard which provides a very mushy typing experience,  a trackpad that has too much play and the fact that Xiaomi couldn't pack the webcam into the display, so it has to offer a separate unit, making it easy to lose or forget. Despite the shortcomings, the Mi NoteBook 14 Horizon Edition is definitely setting a new bar for the category.

If there’s something Xiaomi is good at, its shaking things up real hard in whatever segment it enters. They did this it’s smartphones across various budget and performance ranges and now, they’re finally entering the laptop space. The Mi NoteBook 14 falls at the intersection of mainstream and thing-and-light laptop categories, offering key features from both segments in one laptop. After using the laptop as my primary machine for a few days, here is our Xiaomi Mi NoteBook 14 Horizon Edition review.

Packing the latest from Intel in the form of their Comet Lake Core i7-10710U paired with 8GB DDDR4 memory (soldered, non-upgradeable), a fast 512GB NVMe drive and the Nvidia GeForce MX 350, the Mi NoteBook 14 Horizon Edition really gets the hardware very right. Do note that this is the top-end variant and costs Rs 59,999.

Benchmarking the machine reveals impressive performance. We start off with PCMark 10 and its office-centric benchmark tools, followed by disk speed measurement and of course, the performance of the new Nvidia GeForce MX350. The charts for some of our benchmarks are shown below. 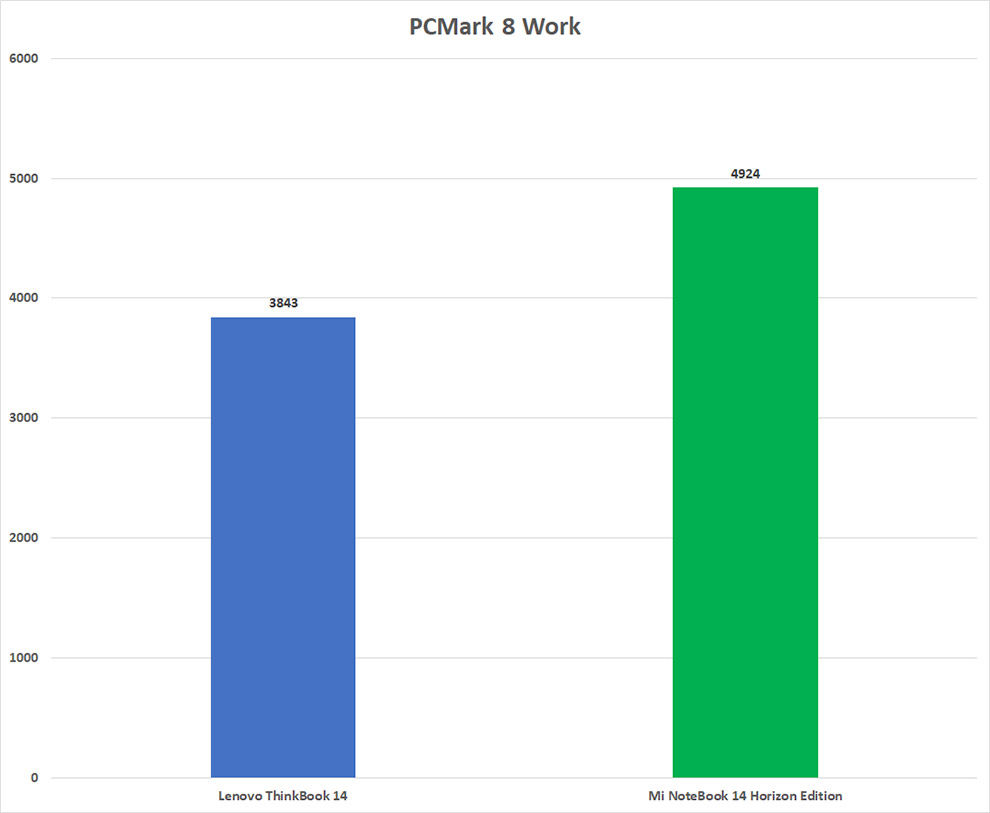 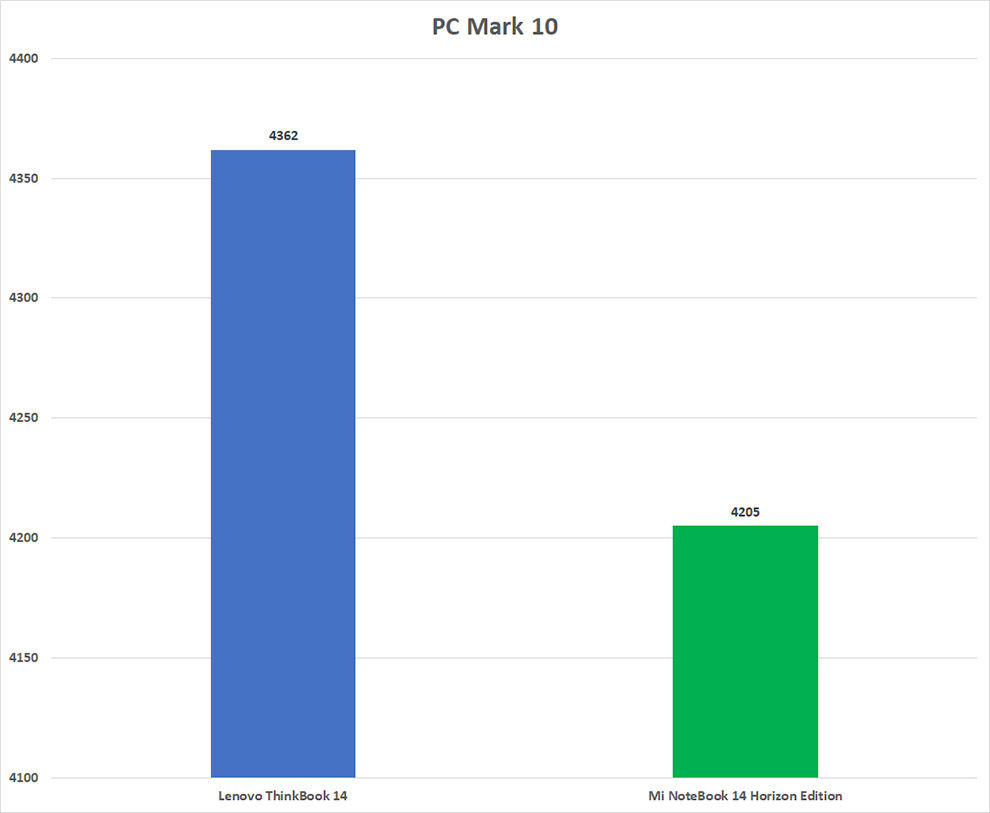 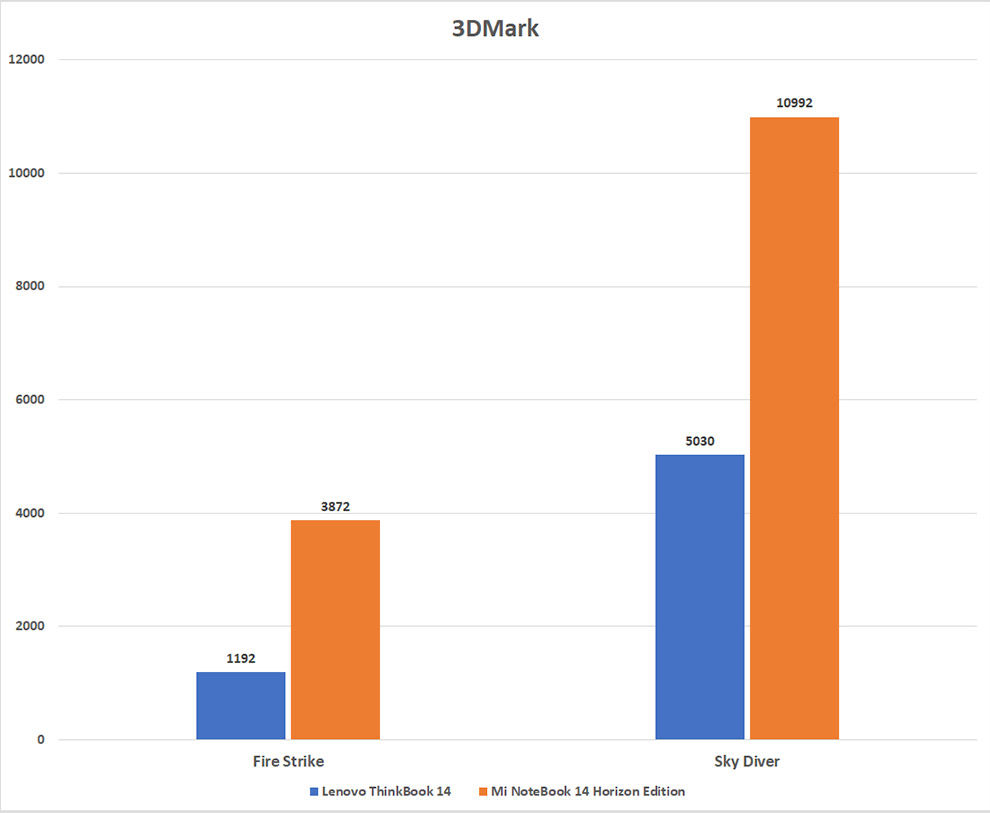 Backing the benchmark performance is the day-to-day performance of the Mi NoteBook 14 Horizon Edition. I used the laptop for a week as my daily driver and found that despite having close to 20 tabs open in Firefox at all times, several word files and a few of our scoring sheets open in Excel, the machine would not break a sweat. The signs of struggle only showed when I fired up Adobe Lightroom to run an edit on 50-odd RAW files. Despite the discrete graphics, the machine stuttered between every movement of the adjustment slider. Switching over to photoshop, again editing RAW files one at a time was less than fluid in ACR. With the image loaded in Photoshop, adjusting curves saw occasional stutter as was painting in masks and working with adjustment layers. The Mi NoteBook 14 Horizon Edition is great for day-to-day use, but definitely falls short as an option for creators. 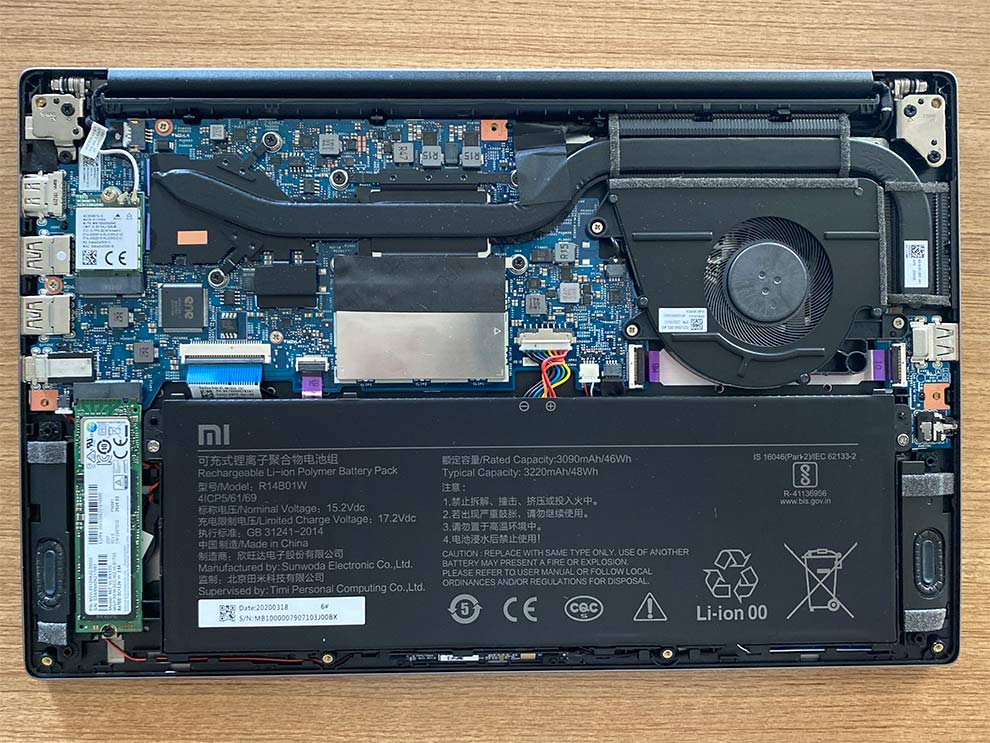 The Mi NoteBook 14 Horizon Edition is cooled using a rather simple design. A single fan cools the singular copper pipe that traverses the Intel Core i7-10710U and the Nvidia GerForce MX 350 chip. In normal use, the keyboard area of the laptop doesn’t get hotter than 34 degrees, while the frame just above the function keys can get noticeably hot at around 44 degrees. The heat is exhausted mostly out the left side but even there, we didn’t see the temperatures get uncomfortable. The large cuts on the bottom panel allow the Mi NoteBook 14 Horizon Edition to pull in sufficient air to even keep the base relatively cool, with the temps clocking in at 42-degrees at its hottest point. 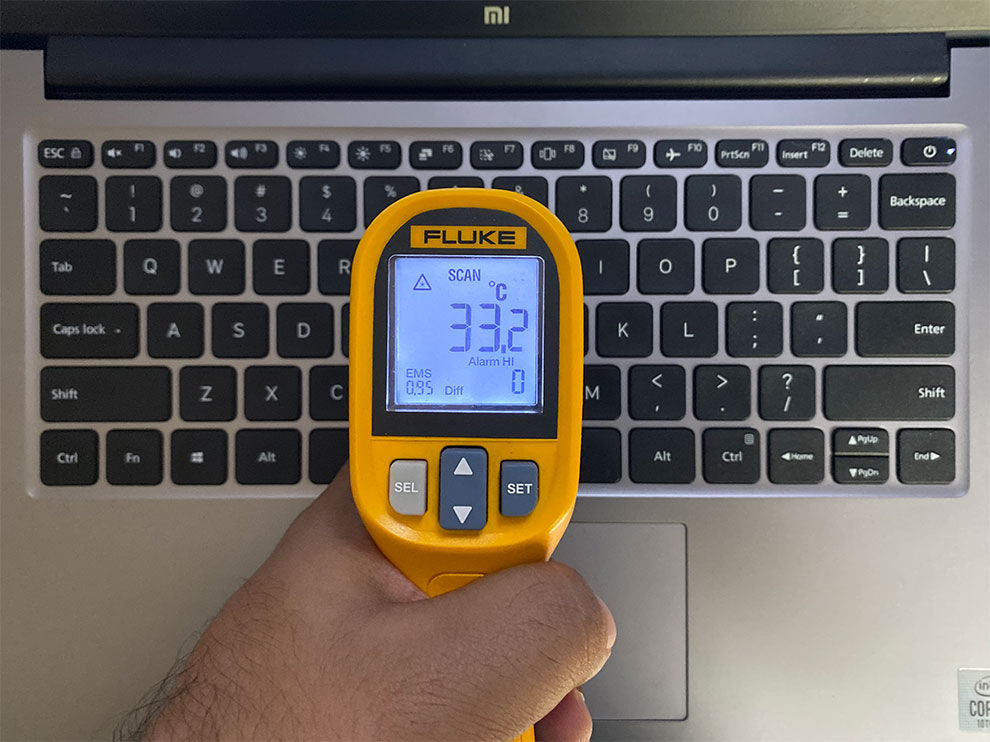 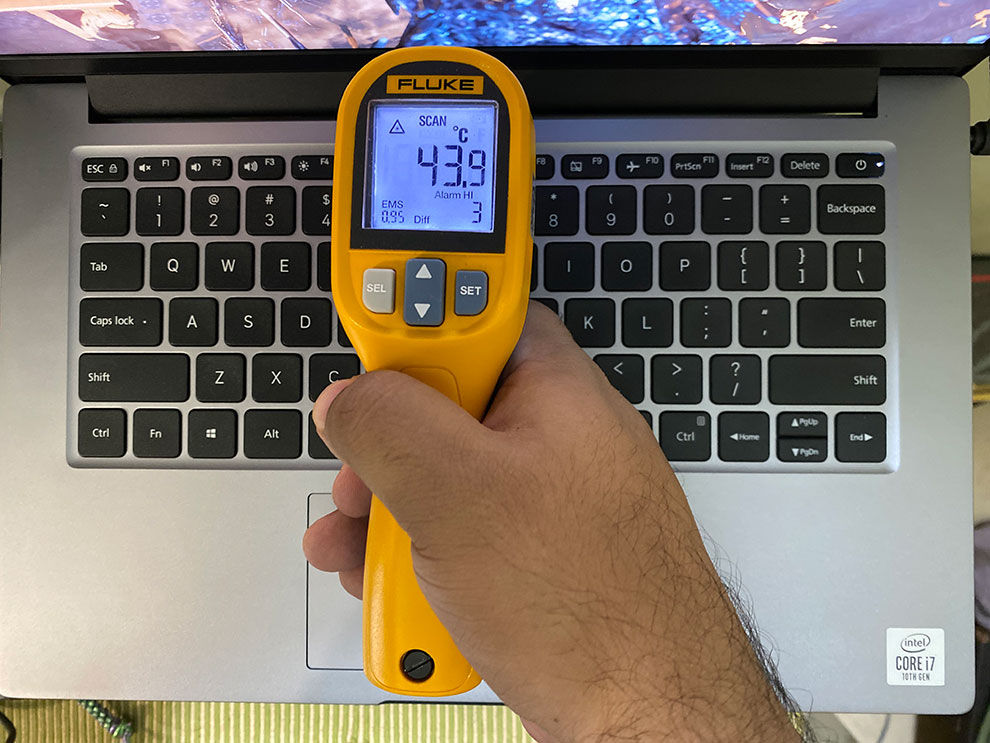 During normal use, however, things are somewhat different. If you were to use this laptop for just simple office and tasks like I did, then the laptop manages to remain fairly cool on both the top and underside. It is only the back 1.5-inches of the base that registers higher temperatures due to the CPU being there, but if you were to use this laptop on your lap, you could position it in such a way that you don’t feel the heat.

The Mi NoteBook 14 Horizon Edition features a 14-inch Full HD IPS display. What makes the Mi NoteBook 14 a “Horizon Edition” machine are the slim bezels. Its definitely a good-looking panel with great viewing angles and good colour reproduction. The panel is also very bright, hitting the 430-lux mark on our lux meter. In real life terms, we were able to use the Mi NoteBook 14 Horizon Edition without any strain on our eyes even outdoors. The matte coating on the display definitely works well in suppressing reflections, but don’t expect it to be effective against bright, point sources of light such as the sun, or even a high-wattage bulb. The display hinge is also very well crafted. The display panel has no play and it stays precisely in the position you leave it. 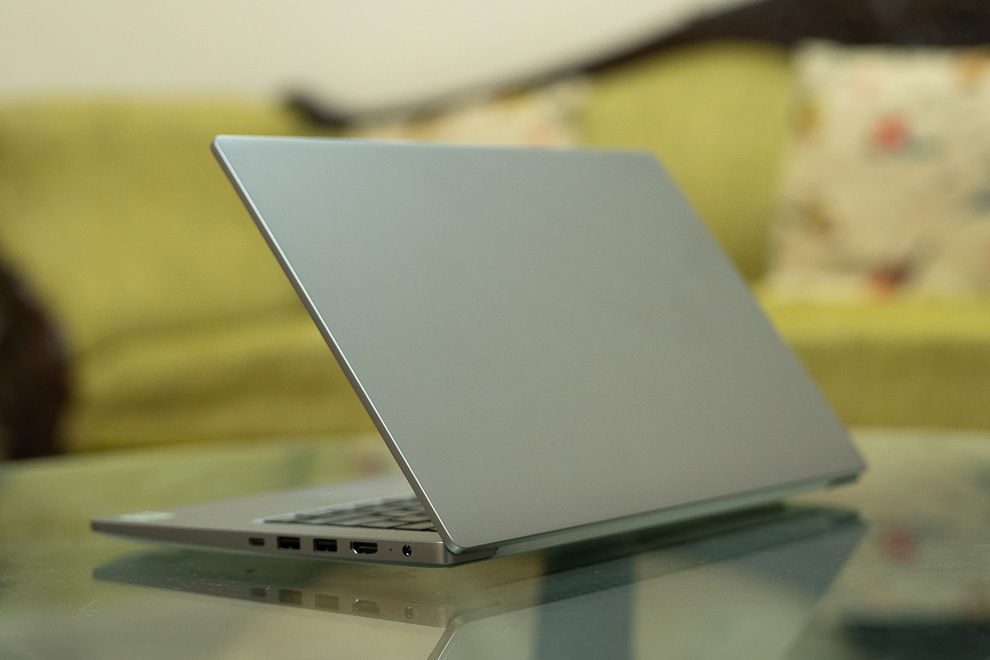 The Mi NoteBook 14 Horizon Edition packs a 48-waatt hour battery and manages to leave us very impressed. On the PCMark 10 battery benchmark, the machine lasted 7 hours and 10 minutes, a very impressive number by itself. I followed up the benchmark tests by using the machine without being plugged in for a few days, and I got about 6 hours of use each time. My usage involved 30-45 minutes of watching Netflix, along with lots of writing and researching, a usual part of the job. As I mentioned before, there were 20+ tabs open in Firefox, and jumped between various MS Office tools. The battery life is definitely a highly scoring aspect of the Mi NoteBook 14 Horizon Edition.

Everything isn’t peaches and gravy with the Mi NoteBook 14 Horizon Edition, and it starts to show with the keyboard and trackpad. The keyboard offers 1.3mm of travel and uses scissor switches for a supposed good typing experience. In experience, we get a keyboard which is fairly mushy, with some keys offering inconsistent actuation points. The keys are not firm at all and typing on it doesn’t inspire a lot of confidence. I found myself double checking the letters in my document to make sure the keystroke was registered. You could still live with all this, but what we can’t accept is the lack of backlighting on the keyboard. No matter how you look at it, the omission of backlighting is definitely a huge corner to cut and could be a deal breaker for many.

Perhaps the worst offender is the trackpad, which is a single piece of plastic with no separate buttons. The left and right click also have far too much play and by the time the click is actually registered, it feels like the trackpad is bending more than it should. While everything on the Mi NoteBook 14 Horizon Edition feels solid, the trackpad feels like it would be the first thing that fails on it. 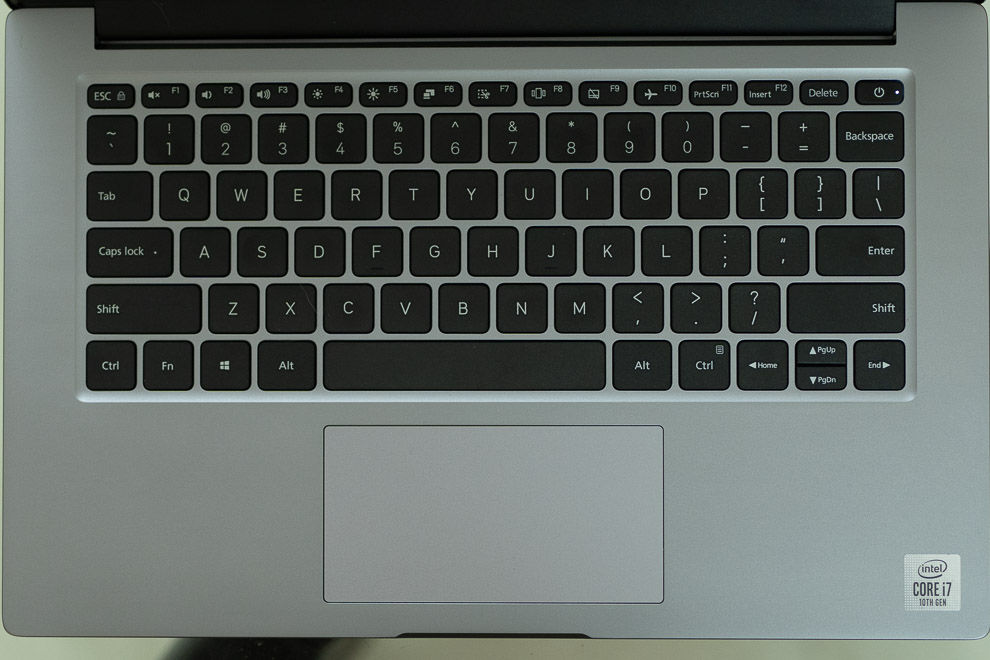 Lastly, we have ports. There are two USB 3.0 ports on the right accompanied by a Type-C port offering USB 3.1 gen 1 speeds. There’s also the charging port and a full-sized HDMI port. While the port selection is fairly standard for this grade of machine, the placement is a little problematic. Plug any device into these ports and you’ll find that if you use an external mouse, its going to bump into those cables a LOT. Thankfully, there’s a spare USB 3.0 port on the left side as well, right next to the unified headphone/microphone port.

The Mi NoteBook 14 Horizon Edition is a surprisingly good laptop. Its performance is adequate, but perhaps its best feature is the sturdy build quality all around. What doesn’t work is the lack of backlighting on the keyboard and less than satisfying typing experience, coupled with a trackpad that has too much play. Redeeming the corners cut is the impressive battery life and when you factor in the good quality of the display and the fact that this machine weighs just 1.35 kilograms, we actually have a viable option for a thin and light machine in this price bracket. The Mi NoteBook 14 Horizon Edition is ideally suited for anyone who is looking for a laptop to fulfil their daily needs of entertainment, typing, researching on the web and maybe, just maybe, even very light photo editing. It is not meant for those who are looking for a budget-friendly editing or gaming machine. For those, you’re still better off going with an actual budget gaming laptop like the Asus TUF Gaming A15 (Review) or the Acer Predator Triton 300 (Review).