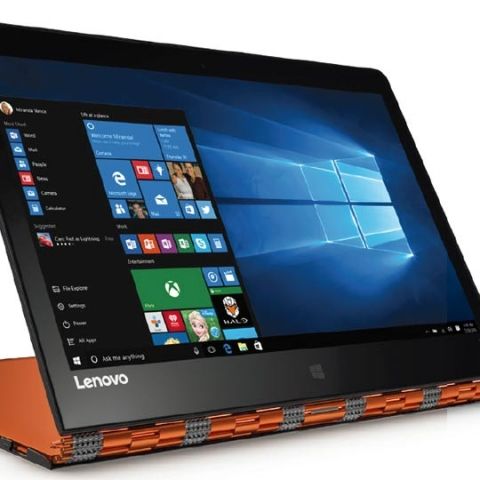 Overall, the Lenovo Yoga 900 is one of the best and slimmest, 2-in-1 hybrid ultraportable money can buy. It’s definitely one of the best convertible notebook’s we’ve reviewed so far this year. The hybrid device is recommended for both business professionals and high-end consumers who want a unique product to play with it. If you can afford it, there’s no reason why you shouldn’t buy it. Also to consider in this price bracket, the HP Spectre x360.

The Yoga 900 is the elite consumer hybrid notebook from Lenovo’s repertoire for 2016, and in many ways the successor to last year’s Yoga 3 Pro. It has a pristine brushed metal surface on its screen cover and a champagne gold colour that catches the eye instantly at a glance. It looks and feels premium on touch, no doubt. Its faux leather keyboard deck is especially impressive. 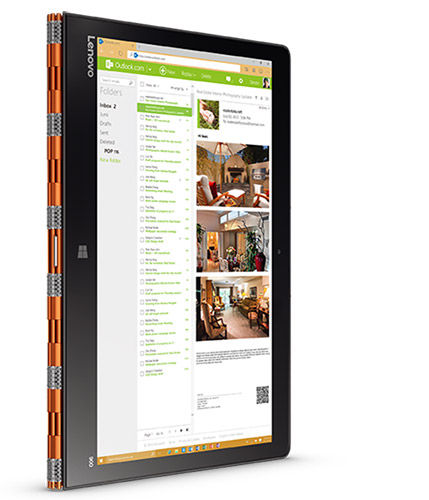 And the single biggest build quality aspect that stands out on the device is the wristband hinge, which Lenovo claims has been improved over the Yoga 3 Pro. The unique wristband hinge does perform admirably not only while fusing together the Yoga 900’s screen and keyboard sections but also while using the hybrid notebook in a variety of positions – tent, tablet, etc. The base panel of the Yoga 900 has camouflaged rubber stopper which does a great job of anchoring the hybrid device on a glass, wooden or metal surface. 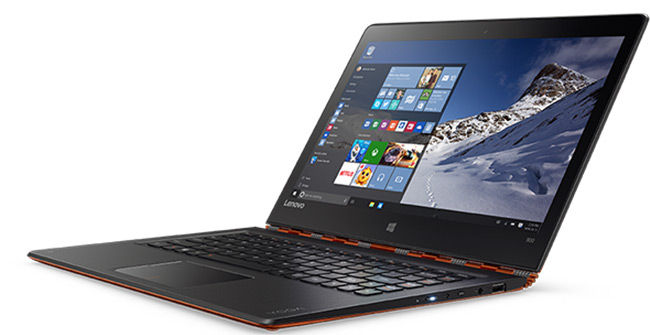 Unlike last year’s Yoga 3 Pro, which weighed in at 1.2 kg, this year’s Yoga 900 model weighs 1.3 kg, which is by no means a significant increase. The hybrid laptop’s 12.75-inch form factor and 1.5 cm thickness means it’s easy to slip inside your backpack and it’s highly ultraportable. Compared to HP’s flagship 2-in-1 hybrid device, HP Spectre x360, the Lenovo Yoga 900 is lighter, smaller and thinner in comparison. As far as hybrids go, the Yoga 900 definitely is one of the best built 2-in-1 laptops out there. Having said that, as with all 13-inch hybrids out there, holding this one as a tablet in one hand is uncomfortable.

One of the Yoga 900’s assets is its promising display. Measuring 13.3-inch and sporting a QHD+ 3200x1800 screen resolution, not to mention a glossy surface, the Lenovo Yoga 900’s screen is one of the best ones we’ve seen this year. It’s very bright, coming very close to its advertised 300 nits output – we measured it to be at 293.4 nits, which is again higher than the HP Spectre x360’s screen brightness of 278.8 nits. The Yoga 900 screen’s contrast ratio, however, is slightly lesser than the HP Spectre x360’s – 505:1 compared to 650:1. It’s still significantly higher than what we see in most laptops and hybrids we test. While the Yoga 900’s screen doesn’t sport a 100% color gamut on either AdobeRGB (76%) or sRGB (99%) space, its inherent IPS screen ensures very good color consistency and no colour shift while viewing the screen from tight angles. The screen’s extremely responsive when it’s in tablet mode, with all the multitouch gestures and flicks working like a charm – no problems whatsoever. The only thing you’d have to get used to is working on a 13-inch tablet while it’s placed on your lap. And the fact that the Yoga 900’s glossy screen can be a fingerprint magnet. 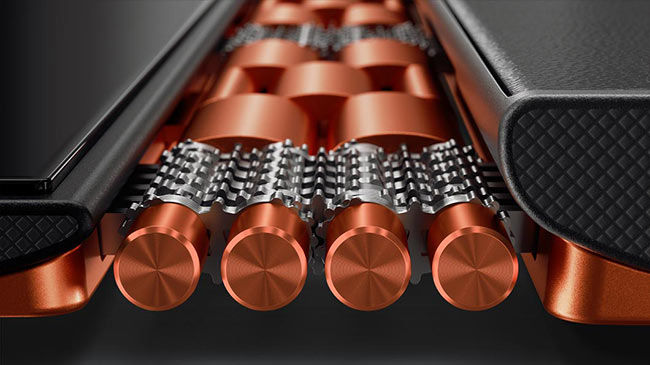 Watching movies is a joy on the Lenovo Yoga 900’s bright and vivid screen, and the visual experience is pretty well complemented by two down-firing JBL speakers (placed as grilles on the bottom panel) with Dolby DS 1.0 Home Theater Certification. Movies definitely come alive, music not so much, as we found the Yoga 900’s audio experience to be slightly lacking on the bass front and the overall audio experience is definitely clearer at higher volume compared to other devices. In our tests, the Yoga 900 scored at par with last year’s HP Spectre x360’s B&O audio, we’d put the HP’s B&O audio output just a notch above the Yoga 900’s JBL speakers at the moment.

As far as keyboard and touchpad goes, the slightly curved keys are pretty good to type on but their significantly shorter travel (or dip) is something you may need getting used to. We aren’t great fans of the shortened right Shift key, but that’s about the only other minor issue with the Lenovo Yoga 900’s keyboard. The trackpad is clearly demarcated from the rest of the palmrest deck and sits slightly below its plane. The trackpad surface is single monolithic, smooth and snappy on touch, and while there are no individual left or right buttons clicking on the trackpad is nice all the same as haptics are finely tuned in this department.

While the Yoga 900 isn’t cut out for gaming, given its onboard Intel GPU, we managed to see whether it could withstand a few sessions of Counter Strike: Global Offensive at medium or high settings. It didn’t! No surprise. While the convertible laptop stayed unusually cool at CPU and hard disk temperatures of 40 degrees and 34 degrees celsius, respectively, during gaming those temps shot up to 62 degrees and 44 degrees celsius, respectively. Lesson learned? Don’t try to make the Yoga 900 hybrid notebook what it isn’t cut out to do – stuff like high-end gaming, advanced video editing, etc. As long as you multitask with day-to-day apps and multimedia tasks, the Yoga 900 should run just fine and at remarkably lower temps at that. 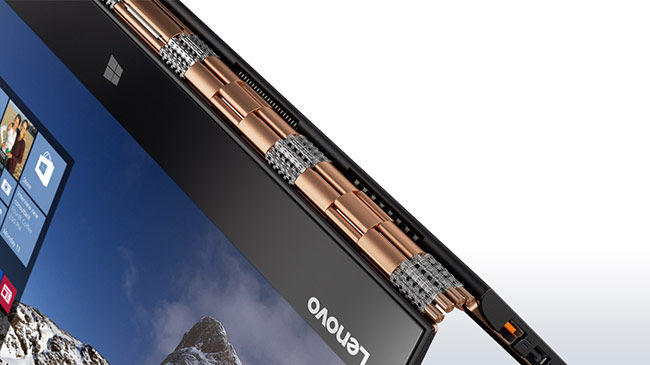 As far as benchmarks go, the Lenovo Yoga 900 performed better than both the HP Spectre x360 and Lenovo Yoga 314 (last year’s best performing convertible laptop) in PC Mark (thanks to its 6th generation Intel Core i7-6500U processor) while it trailed narrowly in the 3D Mark and other graphics benchmarks. In our high performance battery test, the Yoga 900 lasted for 214 minutes as opposed to the HP Spectre x360’s 212 minutes and Yoga 314’s 273 minutes. Realistically, on a conservative power plan, expect the Yoga 900 to last around the 6 hour mark, not more, which is quite good given its high-powered hardware configuration but lesser in comparison to its claim of 9 hours.

On the connectivity front, it’s great to see the Lenovo Yoga 900 embrace a USB Type-C port, which future proofs the device. The 512GB Samsung SSD keeps the Yoga 900 performing at a higher level, its 720p HD webcam is great for video calls, but we’re disappointed for not seeing a dedicated HDMI out port – we know the USB Type-C does support video out, but it’s still a workaround. Sigh. What’s great is the number of reduced proprietary software bundled along with the Yoga 900 – the ever popular OneKey Recovery is present, though, don’t worry.

Overall, the Lenovo Yoga 900 is one of the best and slimmest, 2-in-1 hybrid ultraportable money can buy. It’s definitely one of the best convertible notebook’s we’ve reviewed so far this year. The hybrid device is recommended for both business professionals and high-end consumers who want a unique product to play with it. If you can afford it, there’s no reason why you shouldn’t buy it. Also to consider in this price bracket, the HP Spectre x360. 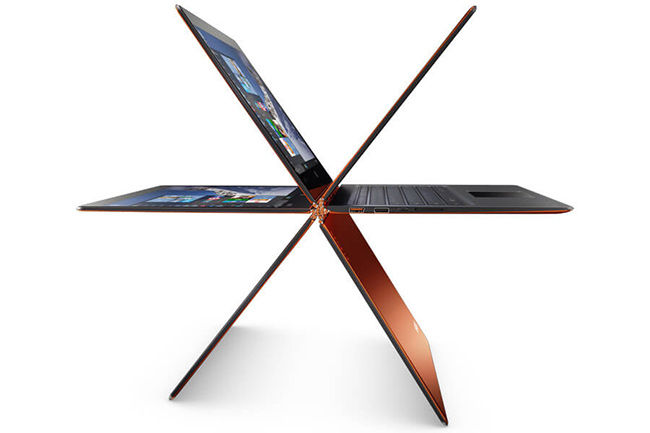