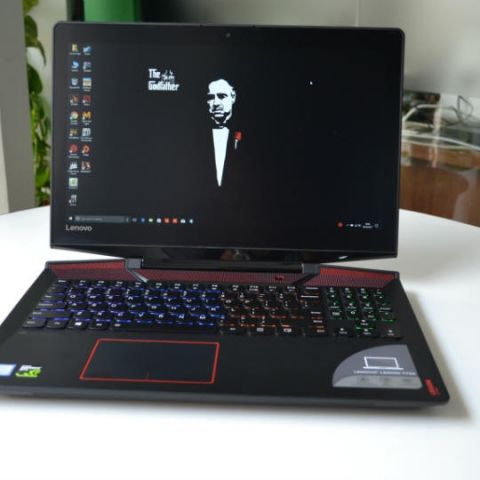 The Lenovo Legion Y720 is a good combination of high end 1080p gaming and good looks. It offers good overall performance, but is priced a little dearer than the rest of the competition.

This year, we have already seen some extreme gaming machines, like the MSI GT73VR and other entry level giants like the Lenovo Legion Y520. These machines are priced differently, they would both suffice for proper 1080p gaming. That means they’ll allow consistent framerates of 60 fps across major titles. The Legion Y520 requires you to lower graphics levels to achieve 60fps frame rates, behemoths like the GT73VR can effortlessly drive frame rates to well over 100fps.

The MSI GT73VR represents the high end here, with two of Nvidia’s GTX1080s GPUs, while the Lenovo Y520 is from the entry level range, running on the GTX 1050Ti. In between these ranges lie the GTX 1060 and GTX1070. Both are VR ready and more than capable of providing 1080p gaming with little effort. Amongst these, the former is currently the GPU of choice for most PC gamers according to Steam's GPU survey. So, is it right to say that the GTX 1060 is all you need for 1080p PC gaming? Well, Lenovo thinks so and it’s current top of the line gaming laptop, the Legion Y720 is packing a GTX 1060 at its core, along with a 7th gen Intel Core i7. We have been playing on it for at least two weeks now and here are our thoughts. 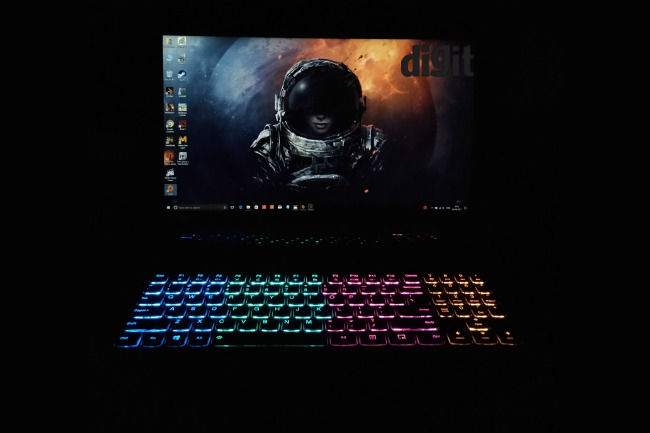 Build and Design
Before we dive into the gaming performance, we need to address the dress code first, which is the usual red and black. While the red and black theme is getting a little monotonous amidst gaming hardware, we still do like it. The machine is quite good looking and its design is reminiscent of the Y700 Lenovo launched last year. You get the same floating display hinge, along with front mounted speakers. The RGB keyboard and the red backlit logo on the back make the Y720 one of the most attractive gaming laptops at its price. 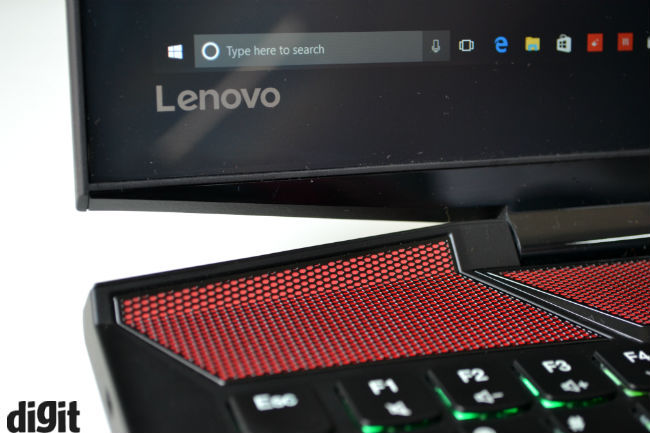 The build quality has also improved and while you do get metal on the front and back, the middle frame of the laptop is still plastic. Moreover, unlike most metal clad laptops with a brushed finish, Lenovo has opted for a carbon fibre pattern, which makes the Y720 even more distinctive. The only design traits that I think doesn't fit with the overall look of the machine are the thick black bezels around the display.

I/O and Display
Coming to the I/O, you have everything required for a good gaming session. You get three USB 3.0 ports, gigabit ethernet plus gigabit Wi-Fi, HDMI out, mini DisplayPort and a USB Type-C port that supports Thunderbolt 3. The USB 3.0 port on the left also supports fast charging and can charge your phone or tablet, even when the lid is down. The laptop also has a headphone and microphone jack combo, which is pretty standard. Although, since Lenovo is aiming this one at mainstream gamers, we were expecting separate headphone and microphone ports to support most gaming oriented headsets. Unlike the Legion Y520, the Y720 misses out on a standard SD card slot. 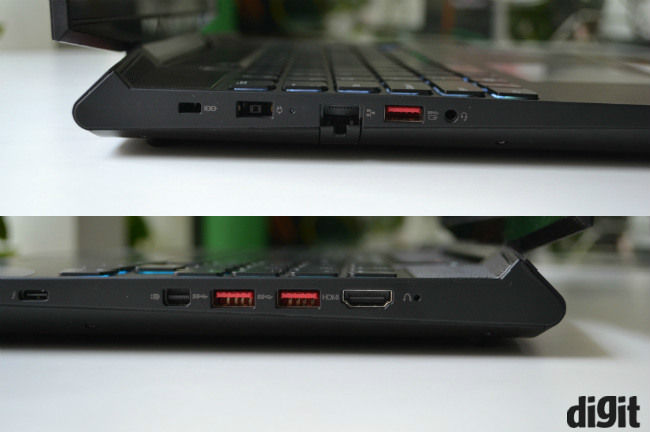 Display
The 15.6-inch IPS LCD display on this machine has the popular 1920 x 1080p resolution. Colour saturation isn't great, but it is still better than any TN panel out there. The display also has a matte coat on top, which does add to better viewability under normal daylight. It is however is not very bright and is best suited to be viewed indoors.

We wish Lenovo would have removed the thick bezels, but it’s not something other gaming laptops have either. But, if the Ideapad and Yoga laptops can have thin bezels, why not give that immersive experience to gamers as well?

Keyboard and Touchpad
The Y720 carries the same standard chiclet style keyboard we have seen on the Legion Y520. It has the same large keys, that are tactile and have decent travel. However, we were expecting deeper key travel and a more tactile feedback at this price point. Nonetheless, the actuation point on each key is still defined well enough to be used for gaming. Unfortunately, our test machine had a wobbly right arrow key, that could be a unit specific issue. 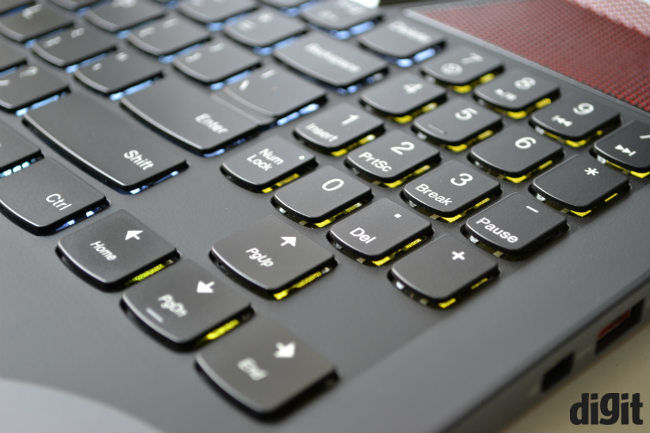 In place of the standard red backlighting, the keyboard gets a full RGB backlight. The backlighting can easily be altered using the pre-installed Nerve Sense app by Lenovo and the keyboard offers four zone backlighting. Unlike most gaming laptop keyboards out there, the backlight intensity is quite subtle and does not seep through beneath the flat keys, when you sit in front of it.

The large touchpad is quite smooth and supports all Windows gestures. The left and right keys are embedded on the bottom area of the touchpad itself and press down with an audible click. However, all that doesn't matter since you would be using a mouse for gaming any way.

Performance
The Lenovo Y720 pushes the graphics envelope a little further than the Y520, but the overall CPU performance is somewhat at par with its more affordable cousin. The reason for this is that both laptops share the same Intel Core i7-7700HQ processor, which combined with 16GB of RAM is one of the best and popular mobile gaming CPUs available today. Hence, it can tackle pretty much anything you may want to throw at it. The graphics performance is better than the Y520, thanks to the more powerful NVIDIA GeForce GTX 1060 GPU. 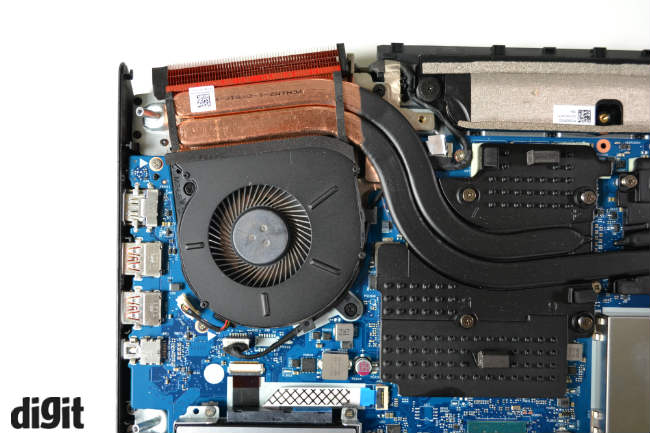 This mid-range GPU in combination with the 7700HQ provides ample gaming performance, and can tackle all kinds of games at high and Ultra settings. That being said, the performance is still not enthusiast grade and you shouldn’t expect it to run games on a 4K display. However, if you are just in pursuit of pure 1080p gaming, the Legion Y720 has adequate performance to punch through even the most demanding gaming titles, like Battlefield 1. We tested various games for multiple time frames and the dual cooling fan solution does the job well, without any throttling issues while gaming. However, we found that pushing the processor to max does make it throttle, but by a small margin only, dropping from 2.8GHz to 2.66GHz. This is at par with other gaming laptops in the category. Here is how the Legion Y720 performed in games running at ultra settings in 1080p. 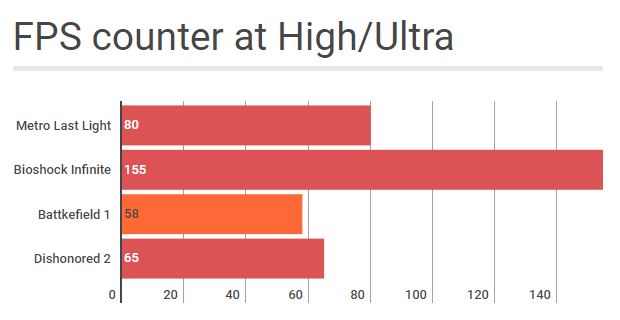 Synthetic benchmarks further solidify our findings and the laptop’s capabilities. We did observe minor heating issues after long gaming hauls (2-3 hours), but the heat only rises near the arrow keys, which are generally not used while gaming.

The gaming or multimedia quotient of the laptop is further enhanced by loud audio output. The laptop features two 2W JBL speakers right above the keyboard and a 3W subwoofer below the laptop. The speakers does a decent job and are definitely better than the most, but they lack proper bass, which seems to be a widespread issue amongst laptops. However, the audio quality via the headphones is definitely one of the best we have seen on a laptop of this calibre.

Battery life
Since this is a gaming laptop, we weren't expecting stellar battery performance. But, it still manages to offer usable battery life. While using it for normal day-to-day work, like surfing the web, watching videos or just regular office work, the battery life was noted at 5-6 hours. The point being that the CPU performance never dips, even on battery. The 60Whr battery however is not powerful enough to sustain the gaming requirements at full load. The laptop starts to stutter in demanding games while running them at ultra. However, if you just want to play Dota 2 or maybe even Overwatch, the Y720 will provide ample frame rates even on battery and will last you almost for 2 hours. 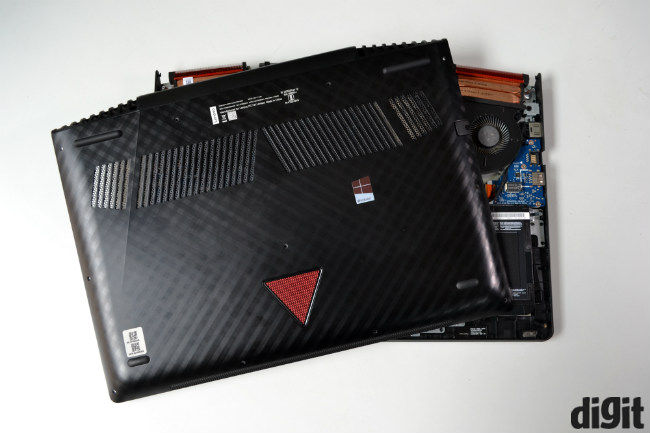 Bottomline
We started this review assuming that the NVIDIA GeForce GTX 1060 and a Core i7 are powerful enough to satisfy all your 1080p gaming needs and it is true indeed. Whether it is a desktop or a laptop, the GTX 1060 is powerful enough to handle all the latest games at 1080p. The Lenovo Legion, which packs this hardware, comes out as a good performer overall and a good looking one at that. With the RGB keyboard and powerful audio output, the Y720 has a lot more character than any other laptop in the same price range.  We still think Lenovo could have given the Y720 a better display and a keyboard with greater key travel, but if you are looking for a laptop with 1080p gaming capabilities, this could be one of the options.

How it compares
The Lenovo Legion Y720 packs a lot of hardware, but there are plenty more laptops offering the same hardware at a more affordable price tag, though you do make compromises with smaller storage space or looks. If you can live with that, then you can relish the same gaming experience with Asus or MSI’s gaming offerings. However, if you want the complete looks and performance package, the Lenovo Legion Y720 is currently tough to beat.