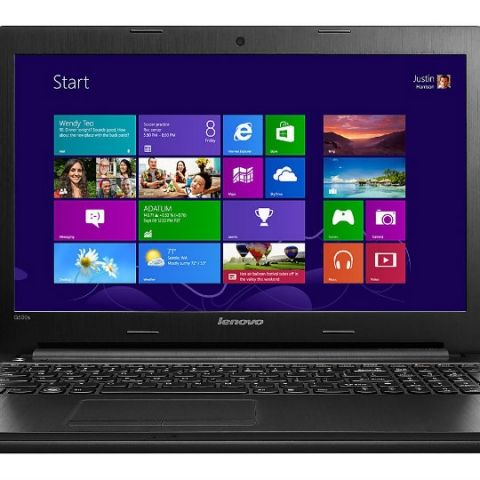 The Lenovo Ideapad G505s is a great laptop from Lenovo and while we don’t have any real complaints about the design and build quality (other than the lack of a touch-screen), we feel that it’s let down by its poor battery performance and easily overshadowed by the G500s, which is a much better deal at almost the same price.

The story of the Lenovo Ideapad G505s is more about the AMD APU than the device itself, which is a fairly standard Lenovo laptop. AMD’s APUs have been in the market for quite a while now but are yet to make a distinct impression. So how does this A10 powered Lenovo fair? Let’s find out.

Being a Lenovo laptop is in itself a badge of quality, which is saying a lot. The G505s does not disappoint and is in fact a very well-built laptop. It’s an all-black affair with a very plain, but classy matte finish. The laptop is quite large given the 15.6” that’s been squeezed in, but is not too heavy and weighs in at about 2.6kgs.

It’s a solid laptop and doesn’t creak too much, the display’s hinge is also fairly solid and doesn’t wobble much either. The layout is very standard, you get DVD drive, 1xUSB2.0 port and the charging port on the right, Ethernet, HDMI, D-SUB and 2xUSB3.0 ports on the left. The laptop itself is quite slim and that’s partly due to the redesigned battery compartment that Lenovo’s been using for a while now.

Being an Ideapad, the laptop does miss out on Lenovo’s famed trackpoint though you do get a keyboard with a dedicated numpad, which is a bonus. As we’ve come to expect from Lenovo over the years, the keyboard is quite good and among the more comfortable ones to type on, but the keyboard itself feels a tiny bit wobbly, not enough to complain about, but enough to bear mentioning.

The laptop is a little shy on features. You get the standard connectivity options plus an optical drive and a numpad. It’s a very basic feature-set that takes care of the essentials. We must add however that the 300GB HDD is a huge let down, especially considering the price. If HDD space really had to be scripmed on, we would have preferred an SSD as we would have at least gained some battery life in the bargain.

The display on this laptop is among the best that we’ve tested. It comes in at about 152cd/m^2 as measured by our Spyder3 Elite test unit and the rest of our tests, primarily those for black levels and saturation, rate this display very highly. The measured contrast ratio of 87:1 (after calibration) is also not bad at all (for a laptop).

In terms of pure computing power the story is a bit hit and miss and to talk about it we need to talk about the AMD A10 APU itself. For those not in the know, here’s a quick refresher. AMD’s APU is essentially an AMD CPU that’s accompanied by a capable GPU (in its segment) on the CPU die itself. It defers from the standard Intel configuration of a much more powerful CPU coupled with a comparatively piddly graphics solution.

All out tests showcase this exact nature of the AMD APU. The A10 delivers stunning graphical performance (beating an NVIDIA GeForce 720m) in our FireStrike benchmark, but falls way behind in any test that requires the CPU (comparable to Intel’s low-powered Celeron CPUs). Here’s a graph showcasing 3DMark scores with the A10 powered G505s pitted against Lenovo’s own G500s (Intel i5 NVIDIA 720m)

The first graph indicates the 3DMark Ice Storm scores, which almost entirely depend on the CPU. The shortcomings of the A10 are quite apparent. However.

If you look at the FireStrike scores in the second graph, the true power of the A10’s GPU is readily apparent.

PCMark scores are more relevant as they give us a better idea of performance in day to day usage, which is what budget laptops are for anyway.

As you can see from both the graphs, the Intel powered G500s outperforms the G505s, clearly indicating that too much CPU power has been lost.

So what do we conclude from this? Unless you truly want the graphical power that the A10 provides, you’re better off with the G500s’ Intel CPU.

Battery life also takes quite a hit with the APU; the laptop clocks in a measly 80minutes in our tests. Do bear in mind that we’re talking about a very heavy load here and that the screen is large at 15.6”. Regardless, 80minutes is just barely acceptable and we were disappointed.

The Lenovo Ideapad G505s is a great laptop from Lenovo and while we don’t have any real complaints about the design and build quality (other than the lack of a touch-screen), we feel that it’s let down by its poor battery performance and easily overshadowed by the G500s, which is a much better deal at almost the same price.