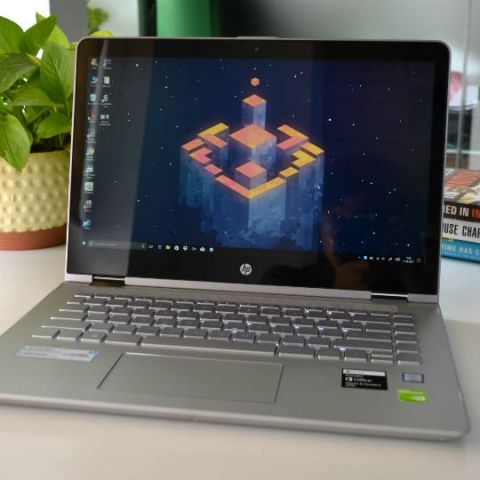 The HP Pavilion x360 strikes a balance between performance, battery life and usability. While we think the price could have been lower, the Pavilion x360 14 ba-073TX makes a solid case for itself with dependable performance and a good display.

The HP Pavilion x360 range of laptops have been around for quite some time now and with each passing year HP is making them better. For 2017, HP has launched three new models, one 11-inch, and two 14-inch variants. All three laptops offer the latest hardware and a new improved design. Adding to that, this year HP is bundling HP’s digital pen (stylus) along with the 14-inch variants. However that is something the competition is also offering and hence the new x360 stands on even grounds with its competitors when it comes to features.

Our review unit is the top of the line 14-inch variant priced at Rs 72,290. It packs an Intel Core i5-7200U, 8GB of RAM, 1TB HDD and a 2GB NVIDIA GeForce 940MX GPU. All this is packed in a 14-inch chassis, with the display rocking a resolution of 1920 x 1080p. Weighing in at 1.72 kilograms, it is not as lightweight as HP’s Spectre, but it is pretty much at par with the competition. On paper it looks like HP is selling a device you would get if you purchase any other 2-in-1 laptop in the same price range, or are they? Well, to find out, let us dive deeper.

Design and build
It seems like apart from bumping up the hardware, HP has focused its attention on the looks and design of the laptop. The laptop is now slightly slimmer than its previous iteration even with a dedicated GPU inside. What’s even more interesting is that it hasn't gained any more weight in doing so. Moreover, HP has reworked the curves and creases of the design, making all panels rounded at the edges, which further adds to the looks. 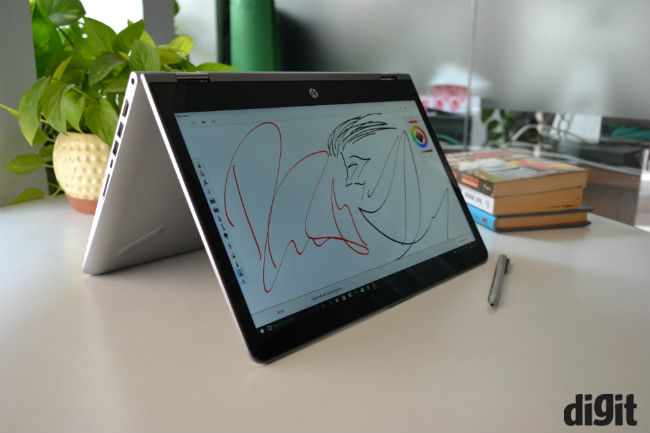 However, for the asking price, instead of an all metal chassis, the HP x360 gets by with same high quality plastic material we got the last time. It seems like this was a conscious decision on HP’s part to give the more expensive Spectre the upper hand. Nevertheless, we don't have any complains about the build quality and we reckon neither will you. Same goes for the new 360 degree rotating hinge, which offers decent resistance and remains in place while typing or watching a movie. The display wobbles slightly when you use the touch screen, but it is not very distracting and is better than what HP offered the last time.

At the base of the laptop, we have the four rubber feet, which provide ample grip when the laptop is kept on the desk. Moreover, if you turn the display around and prop it up to watch a movie or something, the hinge holds the device in place quite well.

Port and I/O
On the I/O front, it is business as usual. On the left side of the laptop we have the power button, followed by a Kensington lock, exhaust, microphone/headphone jack combo and the, volume rocker. On the right side you get, a power port, one HDMI, two USB 3.0 ports, one USB 3.1 Type-C port and an SD card slot. So, compared to last year’s model, the 2017 Pavilion x360 loses out on an ethernet jack, but at the same time gains a USB Type-C 3.1 port. 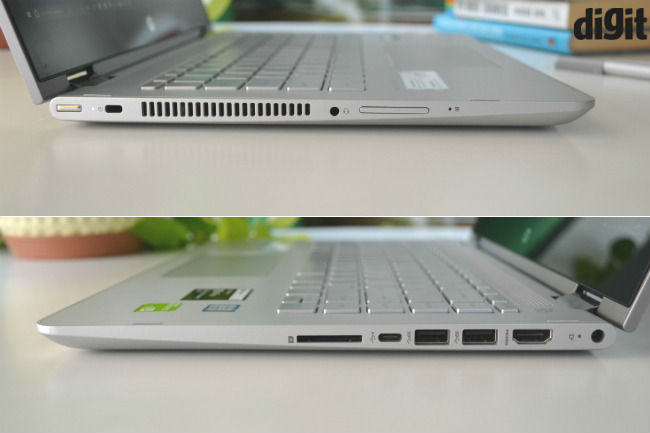 Display
The HP Pavilion x360 flaunts a 14-inch touchscreen panel with a 1920 x 1080p resolution. The colour saturation is decent, so are the viewing angles. Since this has a touchscreen, the panel itself is glossy, which offers good contrast, but it is a bit reflective as well. The touch response is quite good and accurate for the most part. As this is an x360, the display can be rotated completely and you can use it as tablet, but with a weight of 1.7Kgs, we won't recommend you to use it as one. However, put it on a table or desk, whip out the bundled HP Pen (stylus) and you can draw whatever you desire in any of the available drawing apps. A good thing is, you don’t have the connect the pen to the laptop, it does that automatically. Moreover, as the pen works with Windows Ink, one can also use the pen to take down notes in OneNote and use all of the supported apps. 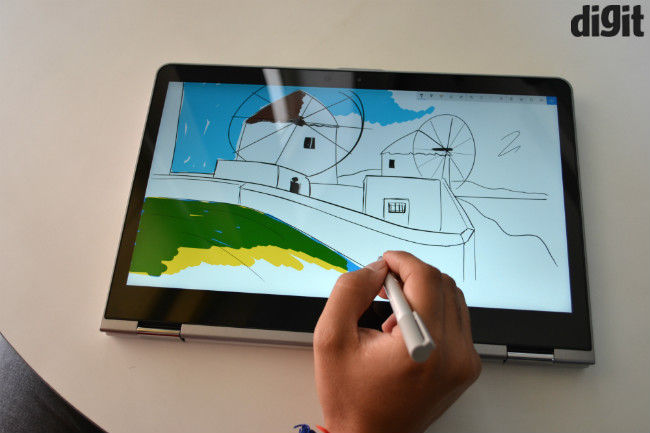 The bundled pen can also be used to navigate around the laptop and it works well most of the times. I say most of the times because, sometimes during writing or drawing, the pen lagged, leaving a small blank spot on the digital canvas. We tried reproducing the issue, but it was too random to figure out the culprit. It could easily be the input lag between the stylus and the pen, but it might just be a Windows Ink issue. That being said, it is not a deterrent for the average buyer.

Keyboard and touchpad
As for the keyboard HP hasn't changed the appearance and layout from last year. Hence, the function keys sitting in the top row are half the size of the normal keys, making them look distinctive and easy to identify. That being said, the smaller keys take some time to adjust into and you need at least a couple of days to get accommodated. However, we do find the smaller ‘delete’ key in the far right inconveniently located. ‘Page down, page up, home and end’ get their own keys, but in doing so HP has squished the up and down arrow keys into the same space used by a single key, making them rather annoying to use. 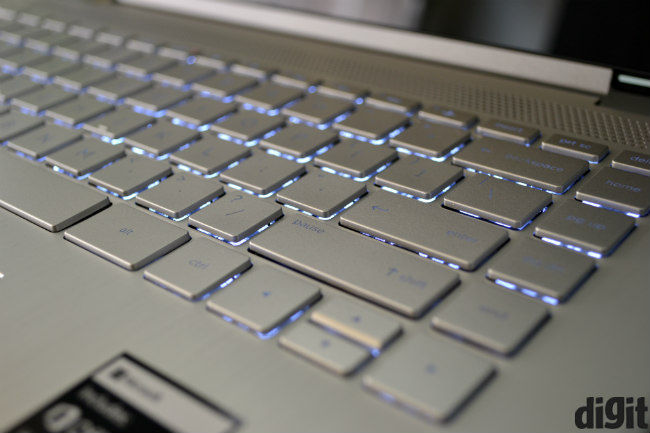 The keys themselves feel a little spongy, which some of you may or may not like. The keys have decent travel and each press does not feel as precise as a Thinkpad keyboard, it is still good though. Moreover, the keyboard is on the quieter side, making less clattering sounds. 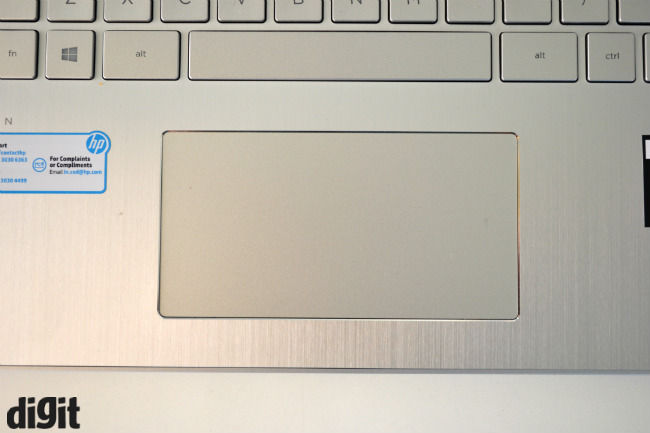 The touchpad on the other hand is smooth and works without any issues. It tracks one, two and even three finger gestures well and is large enough to be used with the slight of the thumb while typing. The left and right keys require ample effort and depress down with a familiar click.

Performance
As we mentioned earlier, this is the top of the line Pavilion x360, thus it has all the performance you may require from a laptop this size and genre. The Intel Core i5-7200U is more than capable of handling all big and small tasks alike and the 8GB of RAM is more than enough to handle multiple tasks at any given time. We used the machine with variable workloads, including one time when we were copying a large data file in the background, had more than a dozen tabs open in chrome and were playing Dota 2 at the same time at medium settings.

On the same note, Dota 2 runs at high settings in 1080p pushing more than 60fps at all times. The credit goes to the NVIDIA GeForce 940MX, which handles the graphics in this machine and does a fair job at that. This last year’s gaming chip is not as good as NVIDIA’s newer Pascal based GPUs, but it still manages steady framerates in most casual and less demanding games such as path of Exile and Counter Strike. 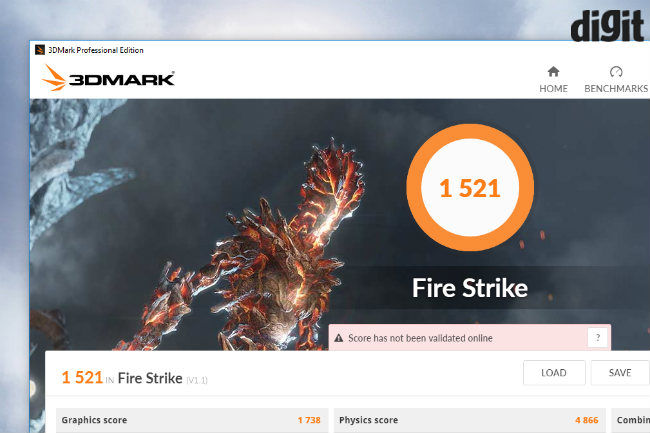 What is a little concerning though, is that the laptop gets hot very quickly above the keyboard, especially on the left side, right above the exhaust, while gaming. Now, the heat is not an issue as your hands won’t be resting anywhere near the hot zones, but it does mean that there are minor throttling issues. Don’t fret, that doesn't affect day to day performance. 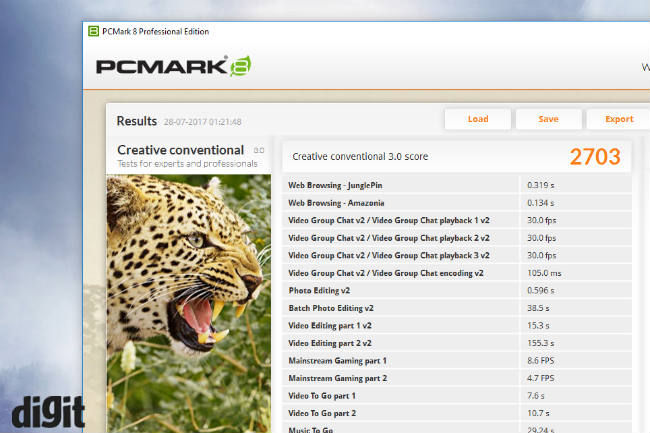 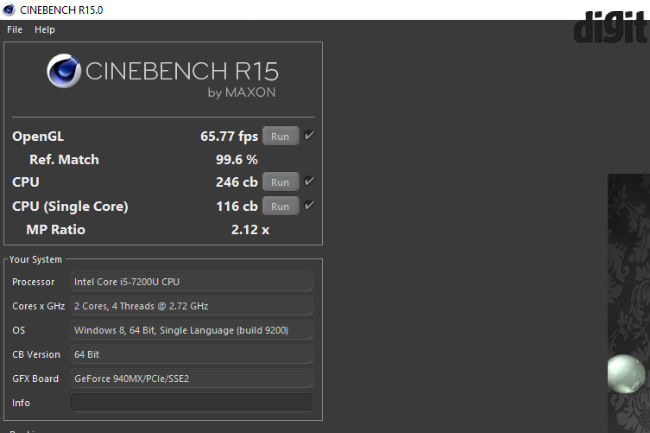 The 1TB HDD drive, which runs at 5400RPM does the job well, but at this price we were expecting at least a 128GB SSD to go along with the HDD.

We also need to address the audio quality of the laptop, which is catered to by a B&O optimised speaker system. It is fairly loud and manages to reproduce most details, apart from the bass, which still remains the achilles heel for most laptop speakers. 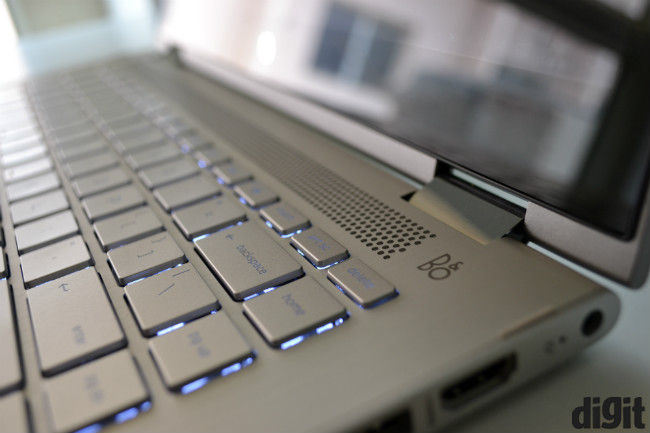 Battery
Lastly, using the laptop as a daily driver, we were able to get about 7-8 hours of usage from it, which is quite impressive. We kept brightness at 100 percent most of the time, during our test period. The battery life only varied when we played video games or watched movies on the machine. In our standard PCMark 8 Work battery test, which comprises of browsing, writing, spreadsheet and video chat tests, the laptop scored 2 hours and 46 minutes, which is slightly better than the category average.

Bottomline
Overall, we think the HP Pavilion x360 14 ba-073TX is a refined version of the x360, HP launched last year. It offers a decent build, battery life as well as reliable performance. It might not be as well equipped as other non-hybrid laptops in the same price, but it does offer a slightly more powerful resume compared to other laptops with rotating displays.

In addition, the bundled pen (stylus) by HP is a boon to all those upcoming artists and casual designers, who are looking to invest in a newer laptop.

How it compares
While Dell does not have a 14-inch convertible in its 2017 line-up, Lenovo’s new Yoga 520S is the only competitor to the new HP x360. Lenovo is the more affordable bet here and also features a fingerprint scanner, but lacks the graphics performance provided by a GeForce 940MX. This makes the HP Pavilion x360 14 ba-073TX the only laptop in its category, which can also be used by casual gamers.