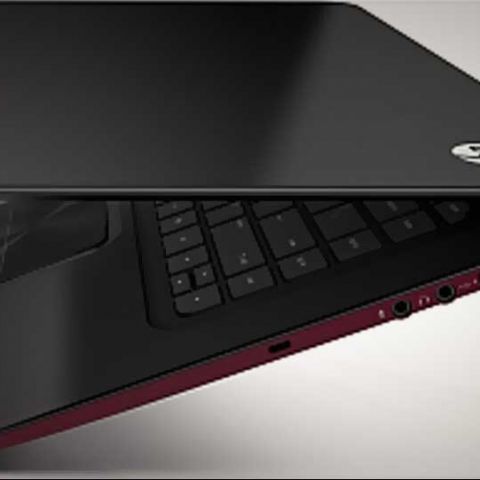 The HP Envy 4 is possibly the best ultrabook money can buy this side of Rs. 60,000. The Samsung Series 5 will rightly have something to say about it - neck and neck in terms of system performance, but the HP steals the march with much better looks and a slightly more compact form factor. Where the HP has a clear advantage is gaming, with the Radeon HD 7670M consistently scoring more than the Series 5's Nvidia GeForce GT 620M.

After the recent update, the Samsung Series 5 had become a cracker of an ultrabook, particularly when you consider the price tag. For quite a while now, we have been recommending the Ivy Bridge version of the Samsung ultrabook to anyone who has been asking for what to buy! But, there us a new challenger on the block, and is taking the battle / providing an alternative, whichever way you look at it, to the Samsung. Yes, we are talking about the HP Envy 4-1002TX ultrabook.

Build & Design
Ultrabooks, quite simply had just one task to accomplish on the looks front – look sexy. Laptop designs and form factors had gone out of hand quite a long time back, and Intel wanted to retain some good elements, as far as possible, in this new category. The HP Envy 4 does tick most of the check boxes on the design checklist.

There is a generous amount of aluminum used on the HP Envy 4, which gives it a “looks more expensive than it actually is” look. The illuminated logo idea that HP had dabbled with till recently, has now given way to the neat looking logo on one edge of the lid. The lid has a very subtle brushed metal finish, and that carries forward to the areas around the keyboard. While this is completely matte and not glossy at all (there really is a God!), this finish has a very annoying habit of accumulating smudges! The very tip of the lid – near side, if you may, when the lid is closed and ready for opening, correct side on – is plastic. We cannot really understand for this little dash of plastic on what feels very premium otherwise.

The ports are on the sides of the HP Envy 4, as they conventionally are for most laptops, with no testing the idea of placing them behind the display. Also, the muscular display hinge wouldn’t allow for that. What you cannot miss is that the side spines as well as the base are in the soft finish crimson red colour, with a matte finish. Yes, for those who have a more conventional thought process, there is the complete black finish option as well, but we believe this one looks absolutely fantastic. Flip the laptop over, and you will see a very well thought out channel of vents – sucking air, blowing it out as well as for passive cooling.

The only real negative that we can see in the otherwise excellent build of the HP Envy 4 is the glossy bezel around the display, and quite frankly we don’t understand the logic for that at all. When you have the most excellent brushed metal finish for the laptop, why ruin it with this dollop of scratch, dust and fingerprint magnet.

Features & Specifications
The Envy 4-1002TX is powered by the Ivy Bridge series of processors – the Core i5 - 3317U clocked at 1.7GHz, with Turbo Boost taking it to 2.6GHz. There is 4GB of RAM to help it along. On the spec sheet, the Samsung Series 5 (read our review) has 6GB of RAM - however, this maybe an example of how the spec sheet doesn’t really show the whole picture, as we will explain in the Performance section.

The Envy has a 14-inch display, with a resolution of 1366 x 768 pixels. It starts on the correct foot – natively quite bright, but not as much as the Series 5. However, the Envy’s display is very comfortable to use for long periods of time, because it has a slightly softer colour handling. Also, adequate crispness allows you to read text clearly with no visible edge noise. However, the display is rather reflective, and that is something we have deducted points for, in the corresponding ratings. Also, the colours may feel softer and very comfortable if you aren’t using this for multimedia viewing, but the display does feel a tad washed out when you are watching a movie on it.

For your storage needs, there is a 500GB hard drive on the HP Envy 4. However, to speed things along, there is a 32GB flash storage for the caching tasks. Incidentally, the Samsung Series 5 has a 24GB flash storage, but unlike them, HP doesn’t have nifty software that allows you to enable or disable this feature, or to clean up the flash drive periodically.

The island keyboard is extremely confortable to get used to, and switching from a MacBook to test the Envy, it didn’t take too long to get used to it, and rediscover my typing mojo! Adequate key travel and the response is consistent across the keys. The keyboard deck is pretty clean, except for the red Beats Audio key giving it a bit of colour. The HP Envy 4’s touchpad has a brushed metal circular imprint, and is like it is sitting on a raised platform with a trench dug all around it! The left and right click keys are integrated, and some who used this did complain that the keys actually kick in a little too close to the bottom left and bottom right edge. But then again, it is all about getting used to it. Multi-touch gestures work well on this touchpad, and upgrading to Windows 8 should be on your radar.

What we fail to understand is why does this ultrabook come with Windows 7 Basic preloaded on the machine. Considering the price of this machine, and the fact that an ultrabook is considered a “premium” device, at least a Home Premium edition was expected. Just like how almost all other ultrabook manufacturers are doing it! Thankfully, this time around, there is slightly less amount of preinstalled software on the ultrabook. HP has also streamlined its own utilities, features of which can now be accessed via the Support Assistant software. This ultrabook is compatible with the CoolSense feature, but since this is version 2.0 of the software, you can only switch it on or off. It is surprising, considering the older 1.0 version allowed you to choose between multiple settings for fan assisted cooling, and how the processor was clocked down.

Visit page two to read about the HP Envy 4's Performance, check out some Benchmarks, and the Overall Verdict

Performance
Both ultrabooks –  the Samsung Series 5 and the HP Envy 4 are powered by the Intel Core i5 - 3317U processor. The clock speeds on both is the same – 1.7GHz standard and 2.6GHz in Turbo Mode.

While the Samsung ultrabook comes with 6GB of RAM, the HP Envy 4 gets 4GB. In terms of benchmark tests then, you would expect them to be neck and neck. And for the most part, they are!

Here is how the two ultrabooks stack up against each other: 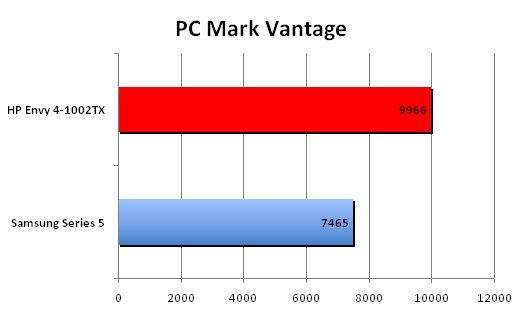 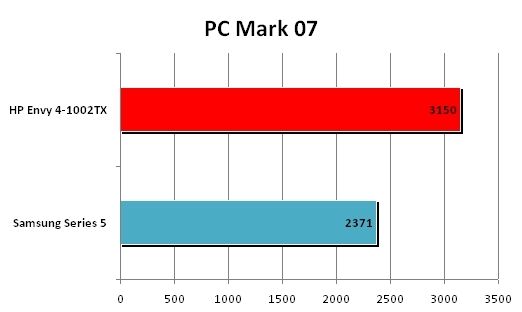 As you can see from the comparison scores, the HP Envy is consistently ahead of the Samsung ultrabook. There is nothing to take away from the excellent performance of the Series 5, which was one of our most vehement recommendations for anyone looking to buy an ultrabook on a budget. However, the HP Envy 4, costing just a few pennies more, just takes the performance to the next level.

When Samsung had updated the Series 5 with the Ivy Bridge processor series recently, even the graphics card got changed to the Nvidia GeForce GT620M (1GB). Now, this one is up against the AMD Radeon HD 7670M (2GB) on the HP Envy. Again, its time to cue in the comparison graphs! 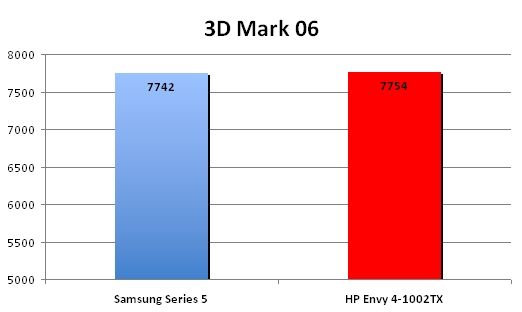 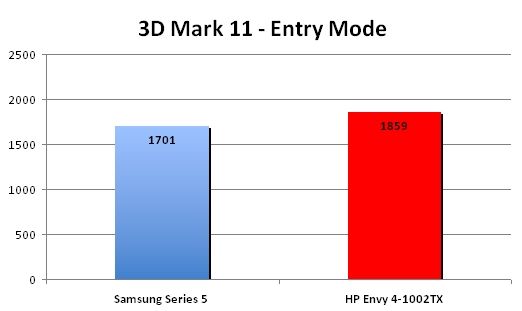 Clearly, the Radeon HD 7670 is doing consistently better than the GeForce GT620M, including in the 3D Mark 11 (all three levels) and 3D Mark 06 benchmarks. However, the FPS advantage shown by the Radeon 7670M in Unigene Heaven and CineBench Open GL tests will make the real difference with gaming. Quite clearly, the ultrabooks did not want to be left behind in the gaming stakes, and anyone who wants to do casual gaming, and even a bit more, will not be disappointed with what both these ultrabooks offer.

Most surprisingly, the battery life offered by the Envy 4-1002TX is absolutely delightful. In our heavy load battery benchmark tests, this one lasted 223 minutes from full charge to full discharge. Incidentally, this is lower than what the Samsung Series 5 scored in the same test – 229 minutes. However, its real colours are shown when you use this laptop under the real world usage scenario. With no music playing in the background, we put this through our daily grind – web browsing, mails, typing out lots of articles, working on excel and a dollop of You Tube sessions. And the Envy lasted 7.5 hours from full charge to full discharge. We must complement the way the processor clocking is handled by the software and utilities preloaded by HP, chief amongst them being the proprietary CoolSense technology, and that has made all the difference.

Bottom Line
Quite frankly, the HP Envy 4-1002TX is the ultrabook to consider this side of Rs 60,000. The Samsung Series 5 is a very competent ultrabook itself, and adorns the package with an optical drive as well. However, the Envy does put a very stylish foot forward, and that is complemented with excellent performance. The real kicker is the long battery life, which really makes this pip the very competent Samsung Series 5 in our ratings.