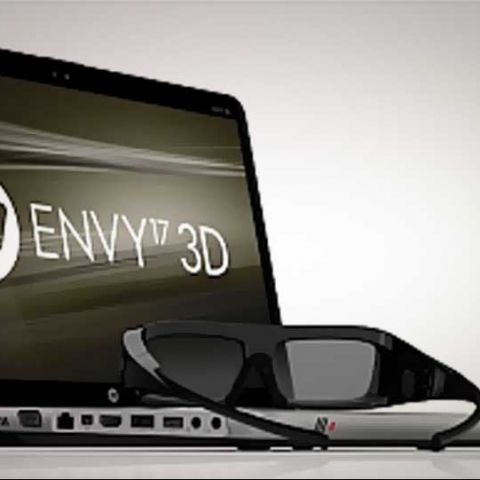 High-end gaming notebooks are a rare breed with few takers. If you are one such person, the HP Envy 3D 17 is a good package - strong graphics, Blu-ray playback and a stereoscopic 3D display with bundled glasses. It's expensive, but a good buy for the discerning gamer who needs a notebook. Of course, you could buy a similar performing desktop for half, if that's your game...

It's been awhile since we've had a large, powerful notebook - the kind that make our arms and backs ache just looking at them. And no - our hearts don't often jump in glee at the thought of a powerful (read gaming) configuration, for no gaming notebook, irrespective of its price, can hold its own with even a desktop priced 40,000 bucks lower, let alone one at the same price. Its tough to shoehorn 200-watt graphic cards into the confined environs that are notebook chassis, and honestly this is a physical limitation rather than a manufacturer's mistake.

However, our little disclaimer notwithstanding, there are those who are aware of the tradeoffs, and still need something portable, (well not really, but at least it weighs under 5 kilos!), to carry around to a LAN party. And such gaming events typically revolve around Counter Strike, UT, Quake 3, or even DoTA (a popular Warcraft 3 mod) - not exactly demanding titles. For such people, HP presents the Envy - a large beast of a notebook, with good components under the boot, and despite our usual derision for "gaming notebooks", we must admit the Envy was quite a package and it seems like Alienware finally has some worthwhile competition. Sure, it's not a desktop with a Core i7 980 Extreme and dual GTX 580s, but heck - it's a notebook and at least someone's trying...

A huge box, completely black in colour, opens up to reveal a rather large notebook, with neatly packaged accessories, including a pair of 3D glasses, powered by a flat battery - the same ones that power BIOS'. With a 17-inch display, the Envy is a large notebook, but it's also handsome looking. A lot of metal has been used on the body, giving it a somewhat more rigid feel, although an Apple unibody it is not! The lid is completely aluminium. The body is quite thick, a result of cramming more powerful components than what most notebooks have, into a relatively smaller chassis than desktops. 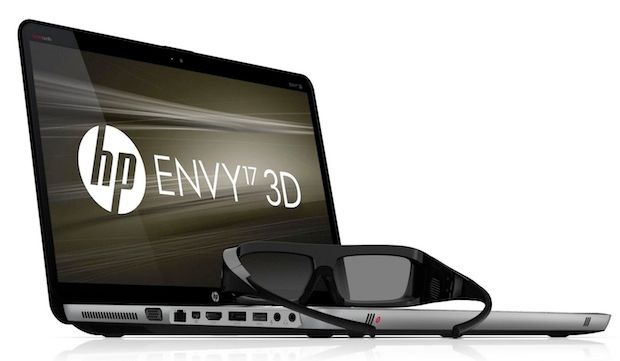 You get a nice patterned lid with a rough texture on the outside, and the inside follows a satin-finish - a welcome relief from the piano-glossy finishes that HP uses a lot. A resolution of 1920 x 1080 pixels will please gamers, but the glossy display is a major bummer in our opinion, especially for a gaming notebook; a pity matte displays are becoming extinct.

The keypad is well laid out, and nicely spaced, although we feel the keys could have been a bit larger. The smaller keys also mean there's a bit more spacing between them then what most users will be used to, which is good for a gaming notebook, but not so intuitive for fast typing. The trackpad is also larger than most HP notebooks, a point of interest to gamers. It's also quite accurate, although you will pretty much need to use a mouse, as we're yet to see a notebook gamer who doesn't use one. The power adapter is a brick, and a far cry from the sleek units Apple provides. However, it is smaller than some of the previous HP notebooks we've seen, yet will add close to a kilo with its cable to your package.

One of the most talked about features of the model we're looking at is the presence of 3D support. The display on the Envy supports up to 120 Hertz and that was enough to give us a hint, in case the blatant bundling of 3D stereovision glasses wasn't enough. Then there's the high resolution display, which at 1920 x 1080 pixels is something gamers will like. For the 17" notebook, we were a little surprised to find only 3 USB ports though. Generally gamers who connect such notebooks to larger monitors will definitely use at least 2 ports - one each for an additional mouse and keyboard. One of the USB ports doubles as an E-SATA port. An HDMI port supporting the latest 1.4 version of HDMI and a Mini-Display Port for connecting to HDTVs and the like. We received this powerhouse with a 9-cell battery, although a lighter 6-cell one is also available.

[RELATED_ARTICLE]The model we received came with a 640 GB hard drive, although HP allows the user to configure up to 2 hard drives, which gamers will salivate at, for speedy RAID 0 becomes a possibility. Alternatively for even more speed, you could consider an SSD and a hard drive for space. Incidentally, the Blu-ray drive that ships with the Envy 17" 3D is also a drive that supports 3D Blu-ray playback - kind of obvious, but essentially making this notebook an expensive, but high quality 3D Blu-ray playback device if you would like to use it thus. We tried a 3D copy of Avatar and needless to say this works pretty well. In fact, the colours are better than we've seen on some TVs, which doesn't mean the display on the Envy is better, but merely that it is implementing 3D better. While such a small display is not cinematic for viewing movies in 3D, it's a good display for the purpose.

Sadly, we couldn't get this to work with most games that we tried. AMD obviously has a few kinks in their 3D component to iron out given that NVIDIA has been doing 3D for awhile now. We tried games like Arcania: A Gothic Tale, Dragon Age 2, Call Of Pripyat, Lost Planet 2 and even Crysis 2, and none of these games worked in 3D! However, we don't blame HP for this, rather AMD is the culprit. If only the Envy 3D 17 came with an NVIDIA GeForce GTX 570...

The configuration we received was also one of the lower end ones. The Envy 3D 17 is available with a Core i7 quad core processor, 8 GB of RAM and two 750 GB hard drives, but we received one with a dual core processor, 4 GB of RAM and a single 640 GB hard drive. Given this, we found the stated MRP price a little on the higher side, but as we discovered later on, the Envy sells for a lot less on the street.

Click next to read on about its performance and our verdict

Let's talk about the display first, since we fired up a couple of games before doing anything else. It's good to see that while the display is glossy it isn't as reflective as some of the others around. In fact, it exhibits decent colour and contrast for a notebook monitor, but is fairly mediocre when you consider its cost and its intended audience. We'd have loved an IPS panel, but we haven't seen 3D versions of those. To put this in perspective, while it's not even close to the likes of the Dell U2410, games look pretty good - good colour, and what's even better a very decent contrast ratio that allow a bit more detail in darker scenes than most notebooks we've come across.

Powered by an Intel Core i5 480M, and a AMD Radeon HD 5850M, the Envy is no slouch. It also has 4 GB of DDR3 RAM, and is thus at par with, or better than many current generation desktops in terms of processing power. As impressive as this configuration is, we must say that we've seen better components from Alienware, but then HP isn't exactly known for gaming notebooks, and this is more a first attempt, and a good one at that. 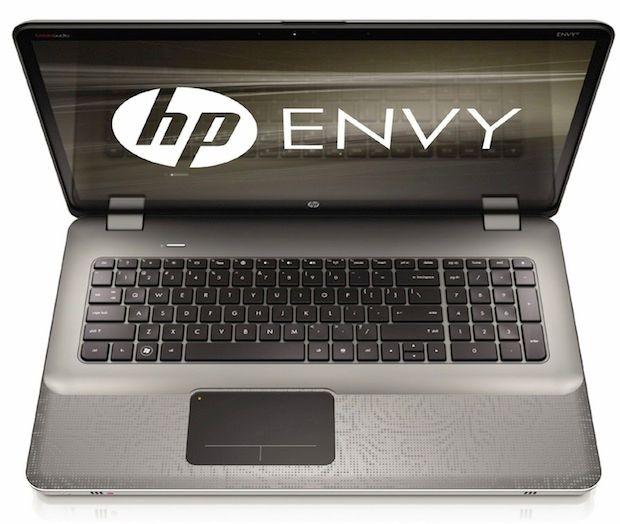 With 27.16 fps in Crysis Warhead, and 53.1 fps in S.T.A.L.K.E.R Call Of Pripyat the Envy 17 3D is no slouch in the gaming department, and will certainly play most titles you can throw at it, although relatively newer ones like Crysis 2 and Metro 2033 will require some tinkering with eye candy levels. In the US, the Envy 3D is available with a Radeon HD 6850 that is not faster than the HD 5850, but will certainly run cooler.

[RELATED_ARTICLE]A price of Rs. 93,550 plus taxes, The Envy 3D 17 is not cheap, or even affordable by any stretch of your imagination (or ours), but it offers a powerful set of components, and 3D support, which while gimmicky, is certainly something that seems to be the future. The fact is this notebook has very few competitors, and with Alienware machines with marginally more powerful graphics costing over a lakh, we feel the Envy 3D 17 is one of the only sub-lakh gaming options. If we could change one thing, it'd be a Radeon HD 6950 in lieu of the much hotter HD 5850, but this is a pretty potent offering for those who want a powerful gaming notebook. Street prices are reportedly a lot lower, around Rs. 84,000 or so, and at this price, the Envy 3D 17 makes a good buy, but only if you are sure you don't want a desktop to game on!

Note: Our ratings for this product have changed in lieu of its greatly reduced market price.