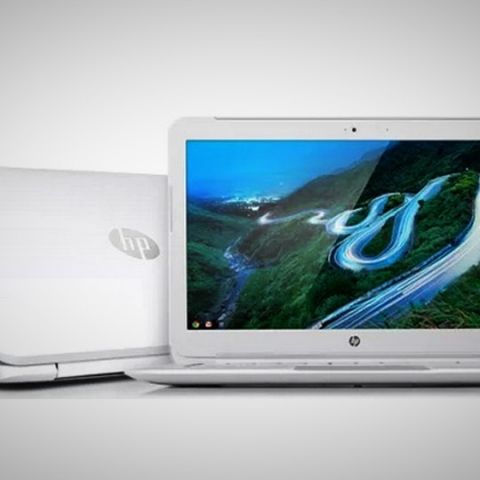 To the point, and brilliant. The purpose of the Chromebook is fairly straightforward - straightforward computing at a low cost, and critically, good battery life. Anyone who is already relying on Google's own ecosystem of apps and services would find switching to this platform a rather tasty deal. For others, who may be reliant on third party software, the transition may not be as smooth, or even out of question in some cases. Meant for students, home users and even professionals who simply need access to mails, spreadsheets, presentations and media on the move. Power users, nothing for you to see here!

HP has been rather active over the last few months, for launching desktops and laptops with alternate operating systems, other than Windows. The very powerful Android 4.2 based Slate AIO is one such example. Adding to that list is the HP Chromebook 14, with the Google Chrome OS. All laptops that come preloaded with Chrome OS are branded as Chromebooks, irrespective of brand or model. It is more a case of expectation, to see how Chrome as an operating system works in a world where people have been mostly using Windows or Mac OS X for the productivity and home uses. Safe to say, that mostly Windows users will switch, but then again, they are in for a big change.

Build & Design
Apparently, the HP Chromebook 14 is available in peach, white and blue colour options, but the listing on the HP India shopping website suggests that only the white colour version is available in India. While we would have loved the colour options, no matter, nothing to get bogged down with. Over time, we started liking the white colour review unit, although it does get dirty rather quickly, thanks to the dusty environs we live in. 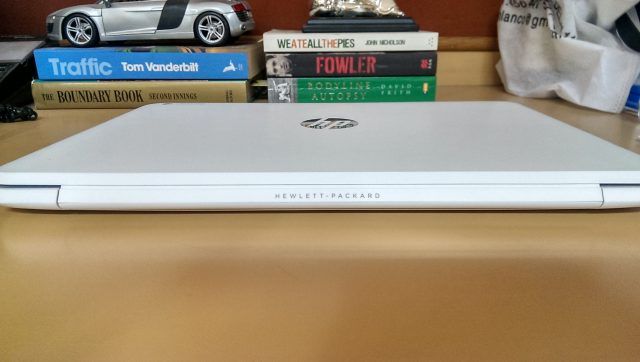 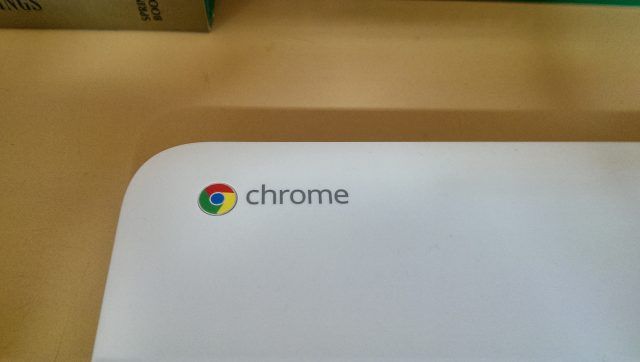 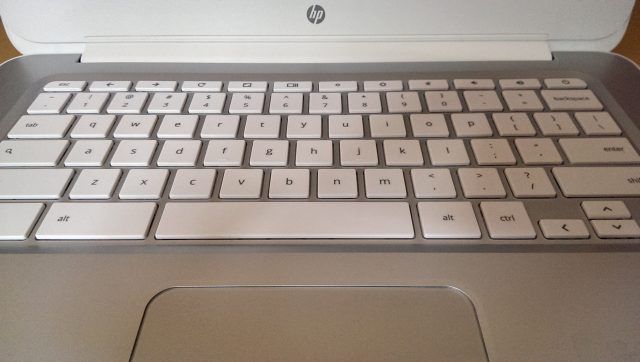 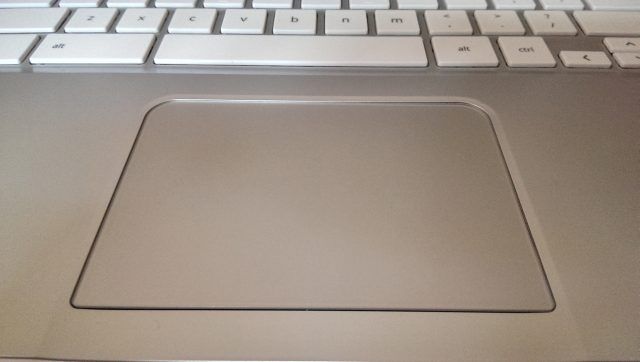 The lid and the bezel around the display are white, with the plain non-reflective finish. The keyboard deck and the touchpad have a silver finish, while the keyboard itself remains white. The port placement is fairly conventional. On the left spine is the HDMI out, two USB ports and the 3.5mm headphone jack. On the right side is one USB port and the memory card reader. 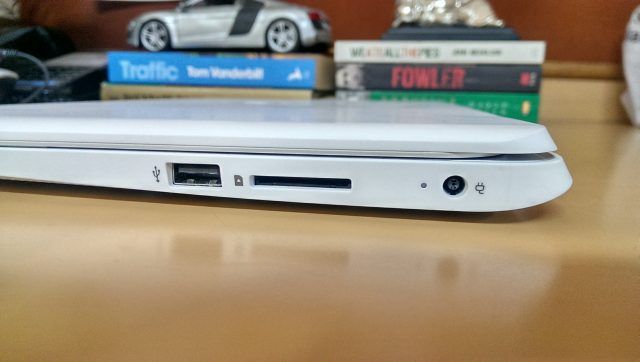 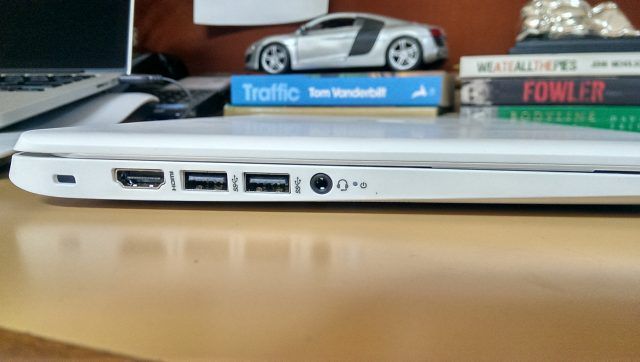 In terms of design, the thickness of the HP Chromebook 14 is consistent throughout, although when looked at from side on, it would seem thicker closer to the hinge and thinner towards the front.

At 1.9kg, it is definitely not going to have us cribbing when lugging it around. For a 14-inch Chrome OS machine, we need to keep in mind that the Chromebook 14 has a bigger footprint than most 11-inch Chromebooks.

The shift from Windows or Mac....
If you had chided Microsoft for the lack of the start button in Windows 8, this OS will possibly invite more snorts of derision. But then again, the purpose and the method of achieving that purpose are completely different. And that is the learning curve with Chrome. For starters, and for all purposes, most of the stuff will run in the Chrome web browser. Too much Chrome branding to get confused with, but bear with us! The base is the Chrome OS, and the quintessential window to the world of the Internets is the Chrome browser. You can download apps on this, but they will be web based versions. Dropbox? Web version. Pixlr image editor? Web version. What you essentially need to come to terms with is that most of these “apps” that you download from the Chrome store, are shortcuts to the web page. Used as the primary machine at work for a few days, it was a major learning curve. First, you need to get used to using Google Docs. For someone who has used iWork and Microsoft Office suites always, this is a change. Secondly, being heavily reliant on Dropbox, shifting everything over to Google Drive is another step that you really have to take. The range of apps for Chrome OS is still limited, but worry not, because Angry Birds is there!

As an OS, Chrome has its distinct advantages. It is simple, uncluttered, and to the point. There are no pretensions of taking on Windows or OS X, and that is what makes this so enticing. Chrome OS is meant for a specific task. Ideal for someone who is already using the Google ecosystem - browser, Mail, Drive etc., for their work. And also for someone who needs a simple to use laptop for web browsing, accessing emails, streaming media and playing the odd casual game. 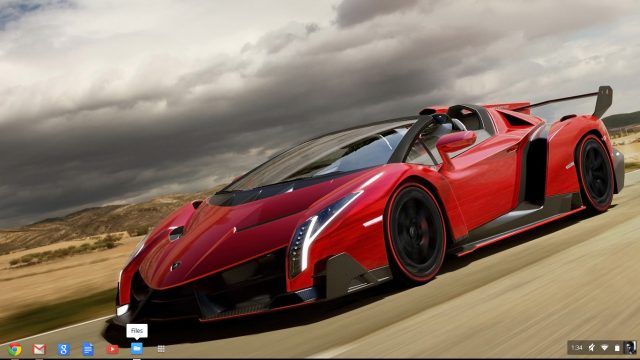 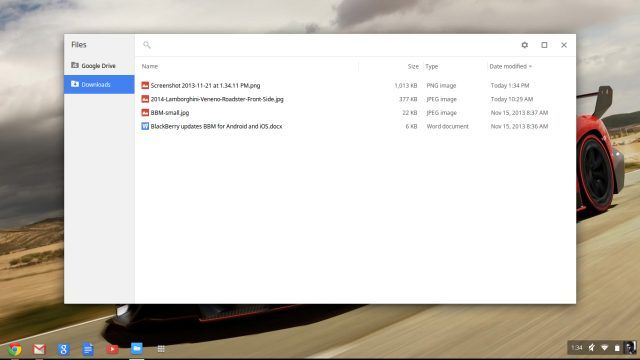 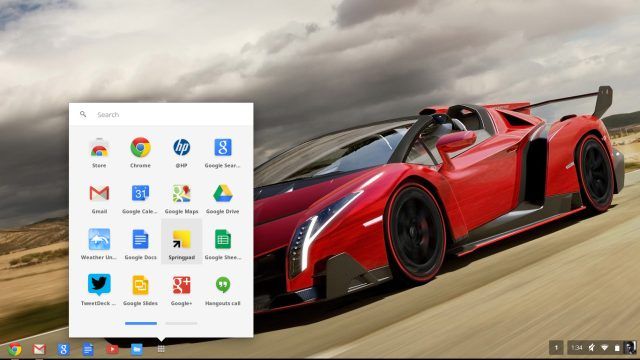 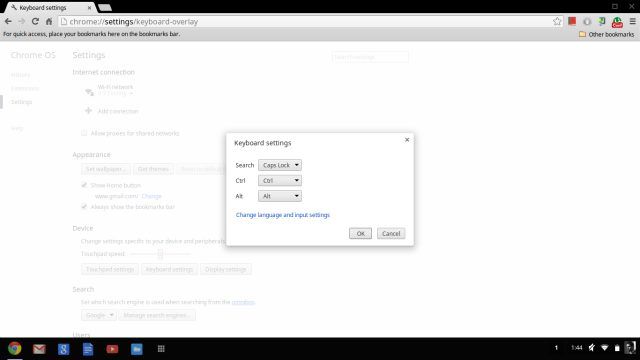 Performance
For that particular task, the Chromebook 14-q001tu from HP is doing a very good job. And sets an example of why specification sheets aren’t always a good indicator of the level of performance you could expect from any notebook. On paper, the Chromebook 14 has an Intel Celeron 2955U (Dual-Core) processor clocking at 1.4GHz with 4GB of RAM. However, before you scoff at the “Celeron” processor, important to realize that this is the Haswell based 22nm versions, which replace the Ivy Bridge based Celeron 1007U, which powered the HP Pavilion Chromebook 14 launched earlier this year. For an OS as simple and streamlined as Chrome, this spec is more than enough, updated for better battery life. We really have no synthetic benchmarks for this platform yet, so no numbers. But as a primary laptop for a day at work, there was never a stutter or system freeze. Opened up to 20 tabs in Chrome, and the only real load indication was that the word document in Google Docs suffered from a sluggish cursor. Not a bad deal, considering that the specific task this machine is meant for, is being completed successfully.

For a machine that is quite slim and manageable weight, the build quality is quite good. It is all good quality plastic throughout, well put together. The display hinge isn’t the tightest, but the excellent keyboard and the generous amount of connectivity options more than make up for that. Typing quickly is easy, with the sharp and precise response. The only issue is that the Caps Lock key is marked as the search key, and by default, the Caps Lock method needs you to press alt and the search key. You can change that in the settings, but if your Wi-Fi password has some capital letters, it will be a bit of a task when setting up the machine! No optical drive, but what you get are 3 USB 2.0 ports, memory card reader and HDMI out. The lid is pure white in colour, with the Chrome branding very prominent. The keyboard deck is warm grey in colour, while the base is again pure white, but with a self design that also helps with the grip when placed in the lap.

The 14-inch display isn’t something that stands out, with the 1366 x 768 pixel resolution. At brightness levels above 40%, there are no reflections that will bother you during usage. Text is adequately crisp to read, but colours are a tad subdued. Nevertheless, this is one display that will do fairly well while you may be browsing the web, or working on a spreadsheet or even streaming your favorite movie.

Battery life is stupendous, and for the same tasks that we would do on our primary laptop in office, the HP Chromebook 14 lasted a full 8 hours. And at any given point of time, there were minimum 5 tabs running in Chrome!

If there is one issue with the Chromebook 14, it is that there is just 16GB of internal space on board. In a one-time per machine offer, you will get 100GB additional Google Drive storage added to your account, for two years. Yes, we appreciate Google telling us that the Drive is your expandable storage, but for a country where Internet speeds and connectivity aren’t the most reliable, that basket might not be the safest to keep all your eggs in. But, apart from that, the Chromebook as a platform impresses. Mostly because it is to the point, and does that brilliantly.

Buy or not buy?
The purpose of the Chromebook is fairly straightforward - to the point computing at a low cost, and critically, good battery life. Anyone who is already relying on Google’s own ecosystem of apps and services would find switching to this platform a rather tasty deal. And Chrome OS works brilliantly within that. For others, who may be reliant on third party software on their existing Windows or Mac machines, the transition may not be as smooth, or even out of question in some cases. The Chromebook 14 is meant for students, home users and even professionals who simply need access to mails, spreadsheets, presentations and media on the move. Power users, nothing for you to see here!