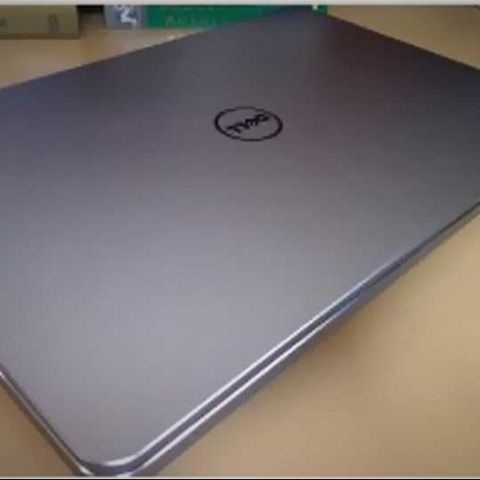 It's quite good to see Dell refresh the look and design of the Inspiron range of notebooks, starting with the 7000 series, both for the 14-inch and 15-inch versions. The resemblance to the much more premium XPS range is uncanny, and that is a good thing. It offers stable performance and very good battery life. But, the 15.6-inch display is still stuck at 1366 x 768 pixel resolution, which is a disappointment. But for that one shortcoming, the Inspiron 15 7000 is a very capable machine. We would recommend this for the good build, stable performance, much improved keyboard and very good battery life.

Over the last couple of generations, the Inspiron 15 notebooks from Dell have been a tad disappointing. While they have been right up there in terms of performance, for sure, the build quality, the display and the keyboard have always fallen short of the mark. And these machines did sport rather hefty price tags. So, after a couple of years of disappointment, I had a tepid response to the new Dell Inspiron 15 7000 when it arrived in the Digit test centre for review. But, I am happy to admit, things are much better than I had anticipated.

Build & Design: The XPS is a relative!
There were a lot of reasons to be disappointed by the previous two generations of the Inspiron laptops and ultrabooks. The build quality was not up to the mark, considering the price tag they sported. The materials used didn’t feel premium enough, the build quality had a few too many rough edges. But, how things change, when you crib too often!

The latest Inspiron 15 notebook, the 7000 series to be precise, is just fabulous. The resemblance to the XPS series of ultrabooks is uncanny, and that is something we are very grateful for - a much more premium design.

Silver aluminum on the lid is ever so slightly shiny, but isn’t “reflective” in the true sense. That's a good thing! And the rounded edges add a bit to the slightly flowing design. Open it up, and the same finish greets you on the keyboard deck - the palmrest area, the touchpad and the keys themselves. In most notebooks, the keyboard sits in a slightly depressed area, and that is a slightly more noticeable element in the Inspiron 15 7000. The diamond cut edges around the deck and the touchpad are the only shiny elements in an otherwise vast sea of sameness.

A large vent and two smaller vents help with the cooling aspect. And for those of you who do not use a cooling pad, the thick rubber feet help with the ventilation when the laptop is placed on the lap. The Inspiron 15 7000 is a tad cooler than most other machines, and is more comfortable for a longer duration. 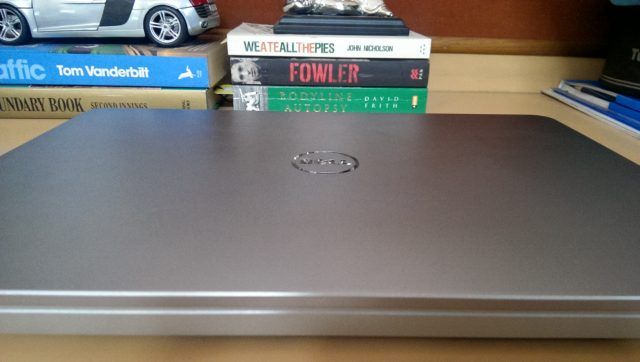 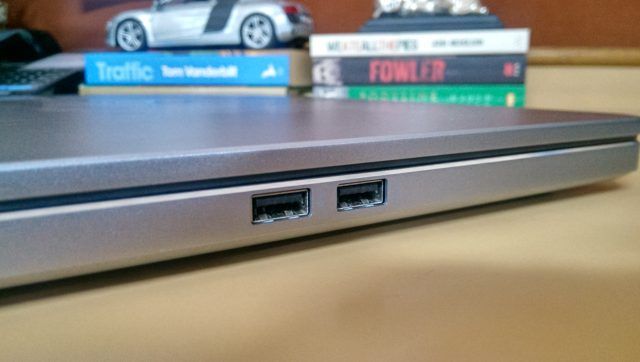 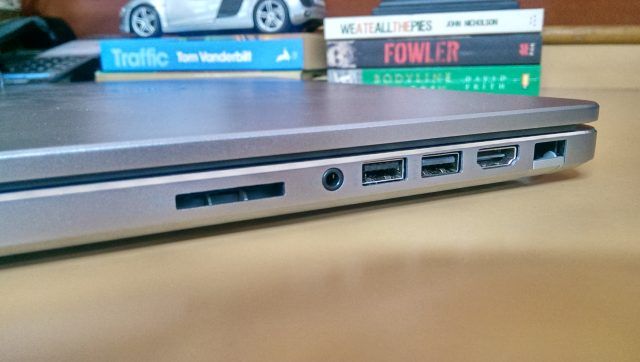 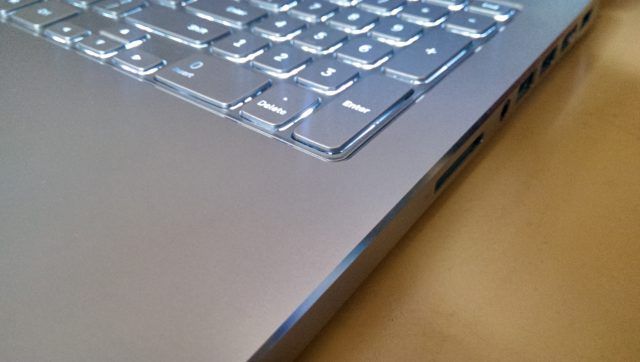 Overall, the build and design of the Inspiron 15 7000 has me falling in love with a Dell notebook, after a rather long time. I appreciate the flat slab design, something that the Apple MacBook has done brilliantly all along. Quite frankly, you may get a similarly spec-ed laptop for a tad lesser, from another brand, but I would pick this simply because of the design.

Performance: Excellent battery
The Dell Inspiron 15 7000 notebook, the version that we have received for review, is powered by the Intel Core i5-4200U processor clocking at 1.6GHz and the boost taking it to 2.6GHz. The system memory is 6GB, and the 500GB 5400rpm hard drive takes care of the storage needs.

In the PC Mark 07 benchmark test, the system clocked 2947, while the Cinebench R15 CPU score clocked 183 points. We do not have too many references to compare these scores with, at the moment, but the real world performance is impressive. The machine boots into Windows 8 in around 30 seconds, but there is a lot of trialware tools that need to be cleaned up, because they significantly slow down performance. A whole process of removing apps, cleaning temp files and cleaning up the startup list is needed, before you will actually feel the performance this machine is capable of.

Graphics performance is impressive, thanks to the fact that the Dell Inspiron 15 7000 packs in a very powerful Nvidia GeForce GT 750M (2GB) chip. In the Cinebench R15 OpenGL score, this scored 61.79 fps. Looked at in isolation, this is good enough to be more than just a casual gaming rig for you. But, being pedantic as I am, it still pinches that this chip scores lower than the slightly less powerful Nvidia GeForce GT 740M (2GB) chip that the HP ENVY 15 j-001TX sports. Just for reference, the GT 740M scored 75.04 fps in the same benchmark. However, do keep in mind that the HP notebook is specc'd with the more powerful Intel Core i7-4700MQ processor. One critical thing to take away from the benchmark comparisons is that the GT 750M (3913) scores lesser than the GT 740M (3510) in the 3D Mark 11 Entry Mode. But, offers better performance in the Performance and Extreme Modes, with heavier graphics load.

Battery life is absolutely brilliant, and surprising as well. On a single charge, the Dell Inspiron 15 7000 lasted 220 minutes in the benchmark test. Haswell’s battery life optimizations definitely are at work here, and also the fact that this laptop doesn’t heat up too much means battery discharge and wear is lesser than some other laptops.

Display: Nothing wrong, but we expected more!
The 15.6-inch display has the same old 1366 x 768 pixel resolution, which quite frankly, is disappointing. The Core i7 version of the same laptop gets a 1080p display, and for this machine, that is a huge omission. Text is crisp and easily readable, and the colour reproduction is a tad richer than the displays from the previous generation Inspiron notebooks. That really helps with watching movies, but what doesn’t are the narrow viewing angles. View the screen from the side at more than 45-degrees and you will see massive colour shift and a lot of reflections. This display clocked 1006 lux in the brightness test, which is more than the 997 lux that the HP ENVY 15 managed. But, at the moment, the HP Chromebook 14, with 1331 lux, is the brightest display.

Keyboard: Massive improvement
I had been fairly vocal in my criticism of the keyboard layout and response in the previous Inspiron notebooks. However, Dell seems to have heard that and worked hard, because the latest effort is fantastic. The keys are a tad smaller than usual, but the layout and spacing is as close to optimal as you can get. The only thing that still needs improvement is the key response, because while the travel is fine, every key press feels a little soft. The touchpad is big enough for multi-finger gestures, and the integrated right and left click keys are demarcated clearly. 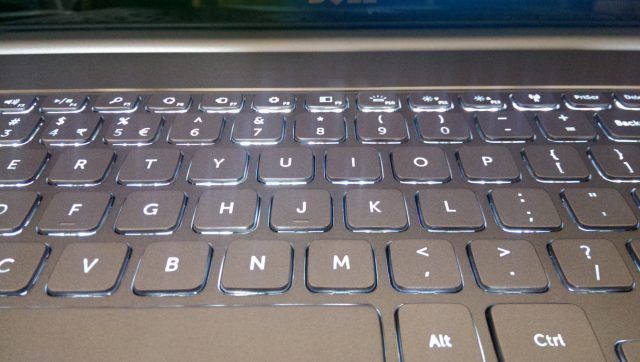 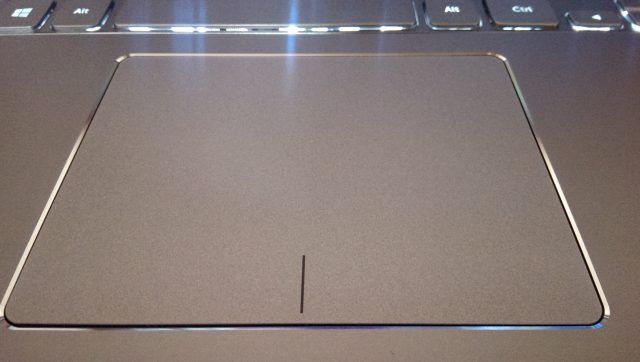 Buy or not buy?
Quite good to see that Dell has refreshed the look and design of the Inspiron range of notebooks, starting with the 7000 series, both for the 14-inch and 15-inch versions. The resemblance to the much more premium XPS range is uncanny, and that is a good thing. It offers stable performance and very good battery life. But, the 15.6-inch display is still stuck at 1366 x 768 pixel resolution, which is a disappointment. But for that one shortcoming, the Inspiron 15 7000 is a very capable machine. We would recommend this for the good build, stable performance, much improved keyboard and very good battery life.