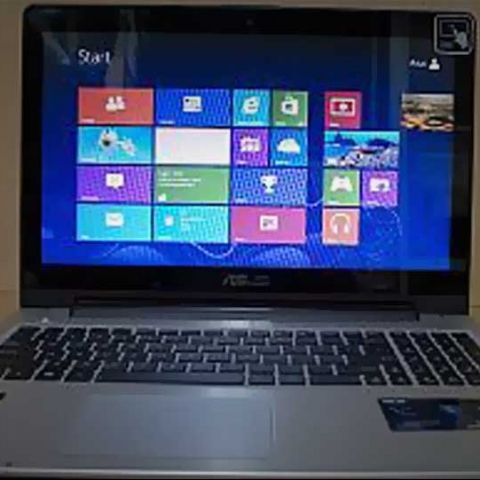 The addition of the touchscreen on a lot of ultrabooks has added a bit of weight for something that was a tad unnecessary. With the VivoBook S550, Asus has managed to deploy the add-on without adding to the thickness or weight. Its performance is at par with the HP ENVY 4 ultrabook, and is built very well, with a dedicated graphics chip adding a lot of value to the package.

At a time when ultrabooks are smeared with bulk and unnecessary weight increases with the switch to touchscreens, the Asus VivoBook retains the old charm – what ultrabooks were supposed to be.

Build & Design: The typical ultrabook, but a big screen
The VivoBook looks very different from the outset, when compared to most ultrabooks in and around the Rs. 60,000 price bracket. The HP Spectre XT is the only machine that has a sharp and edgy look to it, in addition to all the slimness. The S550 does pretty much follow similar design elements. The ultrabook, despite sporting a touchscreen, doesn’t feel heavy or bulky. The aluminum chassis is one of the best in this price bracket, and the angular yet sharp design gives it a very classy look. The dual colour theme of black and silver is a good contrast. Silver adorns the lid and the keyboard deck, while the base has the black colour. The finish throughout is matte, with no glossy bits anywhere to welcome fingerprints and dust.

The connectivity options are placed on the left and the right side spines, with only the memory card sitting on the front near side towards the left. No ports are placed behind the display, something that the likes of the Toshiba Portege Z930 tends to do.

The keyboard deck is fairly clean, with no shortcut keys spoiling the clean look around the keyboard. The shortcut keys are integrated with the “fn” keys, which seems to be the norm now, doing away from the logic of having additional keys to deal with.

All in all, a well-built ultrabook, that does not sacrifice on much. Except that it probably seems to have a slightly bigger footprint than what you would usually expect from an ultrabook. But then again, this has a 15.5-inch display, something not seen often with ultrabooks. If you can accept that idea, this is the ultrabook that offers the seemingly good blend of portability, slimness, good build and a comfortably big display.

Specs & Performance
The VivoBook S550’s specifications are fairly ultrabookish. The machine gets the Intel Core i5-3317U processor and 4GB of RAM. Expecting an SSD at this price would be a tad too much apparently, and the machine packs in a 500GB hard drive. The display is the 15.5-inch LED touchscreen panel, with the 1366 x 768 pixel resolution. Asus preloads the machine with Windows 8 (64-bit).

For the sake of a like for like comparison, you will see us weighing up the Asus VivoBook S550 with the HP ENVY 4 ultrabook at certain points during this review. This is to give you a better idea of how the two compare, considering the similarities, particularly the price tag.

System performance in the real world is pretty much at par with the HP ENVY 4 touchscreen ultrabook, even though the PC Mark 7 benchmark scores show a different picture – 2296 score for the S550 while the HP ENVY 4 clocked 4061, with the same processor. Asus loads a lot of utilities on the S550, and that does have a negative impact on performance. Turn everything off from starting up, or uninstall, and things feel a lot different.

But the VivoBook S550 has the advantage of a dedicated graphics card – Nvidia GT635M (2GB), which offers fairly acceptable gaming experience. The benchmark tests are a literal no content, because the HP ultrabook doesn’t offer a dedicated graphics solution. With the GT635M, you can play games at higher than medium settings – good enough for an occasional gaming session.

The VivoBook S550’s keyboard is slightly behind the HP ENVY 4 – in terms of key travel, precision of force and key placement. The key size is good, but the spacing is a tad too much and the key travel is something we will rank second best to the keyboard on the ENVY 4.

As we mentioned earlier, the 15.5-inch touchscreen display on the VivoBook S550 is not HD. It is high-time 1080p HD displays became standard on ultrabooks and laptops priced above Rs. 50,000. With this display however, you do get a good combination of brightness and sharpness. Colour vividness is not as much as we had hoped, though. The best part though is that it is a less reflective display than a lot of other ultrabooks out there, and that makes this a very comfortable proposition. The touchscreen quality is quite good, but we still don’t see you using it on a regular basis on an ultrabook.

Battery backup times are around 5 hours for web browsing, document editing and a couple of hours of music playback.

Bottom Line
The addition of the touchscreen on a lot of ultrabooks has added a bit of weight for something that was a tad unnecessary. With the VivoBook S550, Asus have managed to deploy the add-on without adding to the weight or the thickness. Performance is at par with the HP ENVY 4 ultrabook. It is built very well, and the dedicated graphics chip adds a lot of value to the package. It is an ultrabook worth considering, for the good specs and performance figures.