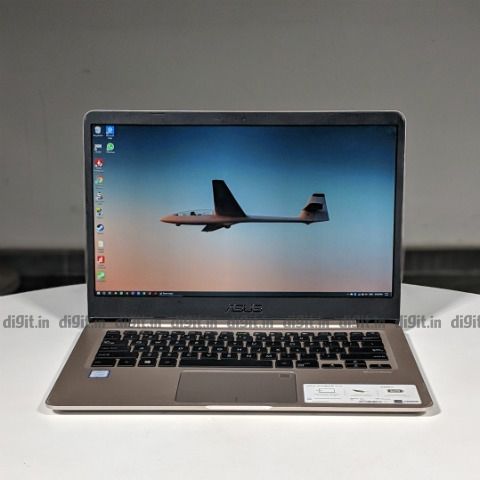 Notwithstanding its questionable build quality, the Asus VivoBook S14 S406U is a great buy for those seeking good performance under half a lakh rupees.

If you’re the kind of user who is absolutely disgusted by slow boot times and unexpected stalls on a PC, then your next laptop has simply got to have the following minimum system configuration: the latest generation of Intel’s Core i5 CPU, 8GB of RAM, and a 128GB solid-state drive. Remember that that is still the minimum. The problem is that there aren’t too many laptops out there that will offer all of that for under half a lakh rupees. Earlier this year, we came across an HP 15 that did, and now, we’ve unearthed another. 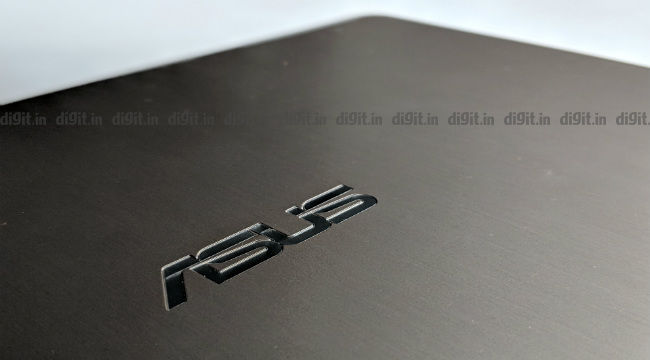 The Asus VivoBook S14 S406U was launched in India with a hardware refresh in October last year. CPU options include the eighth generation of Intel’s Core i5 and i7, with the internal storage capacity going up to a maximum of 512GB. The review unit we got is powered by an Intel 8th Gen Core i5 CPU, 8GB of RAM, and a 256GB solid-state drive. According to Asus, this configuration of the VivoBook S14 sells for Rs 44,990. Let’s see how it fared in our review.

In terms of build, the Asus VivoBook S14 is visibly as sturdy as a parcelled masala dosa. According to Asus, the top cover of the laptop is made of an aluminium alloy, while the base panel is made of moulded plastic. In reality, both panels bend like the wings of a commercial aircraft during bad turbulence at the slightest touch. Though careful PC users needn’t worry about a thing like this, they certainly have a reason to feel disappointed with the laptop’s inferior build quality.

Great amounts of flex on this laptop 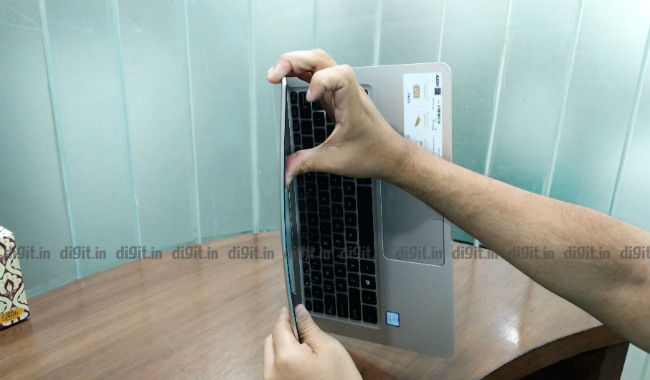 While the display opens easily with the push of a single finger, the panel displays a considerable amount of flex when touched and held. It’s the same story with the base panel as well. Trying to lift the laptop from one side with a palm resting on the other makes the base panel bend like a cardboard sheet. What makes matters worse is the noticeable amount of play in the hinge, which makes the display bob around a bit when the laptop is in use. While the VivoBook S14 looks like it can take a drop or two in its lifetime, it certainly doesn’t feel too rigid when held and used, which could be detrimental to the motherboard’s structure in the long run. On the plus side, it's really lightweight. 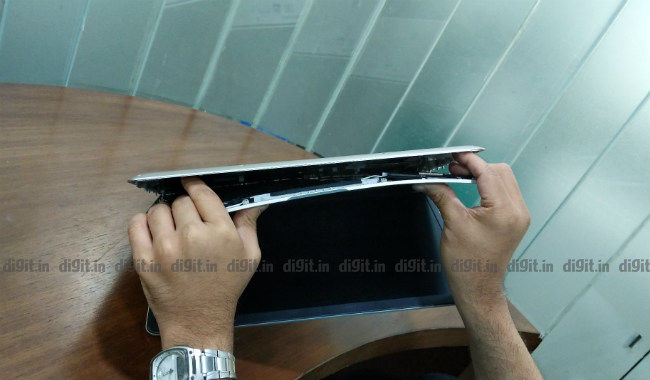 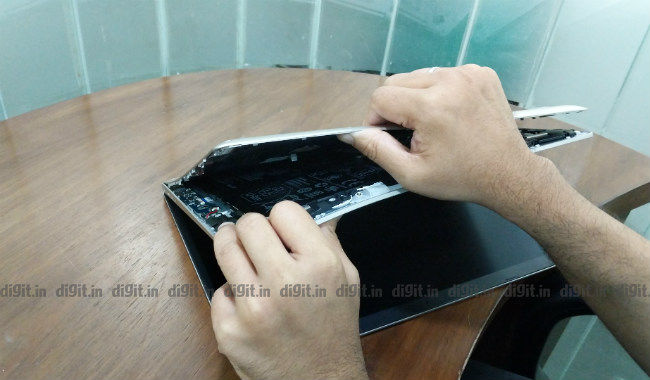 Cheap panels cause structural stress on battery and motherboard too

In terms of design, the VivoBook S14 is quite pleasing to look at. The top cover gets a brushed hairline finish, which lends the laptop that much-needed touch of class. The area around the display is coloured matte black, and the area around the keycaps on the keyboard gets a dotted finish in the laptop’s primary colour. The bezels on the sides of the display measure 8.4 millimetres, which is wider than bezels on the similarly priced Lenovo IdeaPad 330S. The VivoBook S14 is available in two colour options: Icicle Gold and Star Gray. The VivoBook S14 comes with a 14-inch IPS LCD screen with a Full HD resolution and matte finish. According to Asus, the screen reaches a maximum viewing angle of 178 degrees and has a contrast ratio of 700:1. Colours on the review unit's display appeared mostly accurate in pictures, web pages, and videos. According to our test kit, the display is capable of reproducing 93 percent of the colours in the sRGB colour space and 72 percent of the colours in the Adobe RGB colour space, which is statistically on the lower side. Asus had to skimp on something to keep the price low, so it’s understandable. 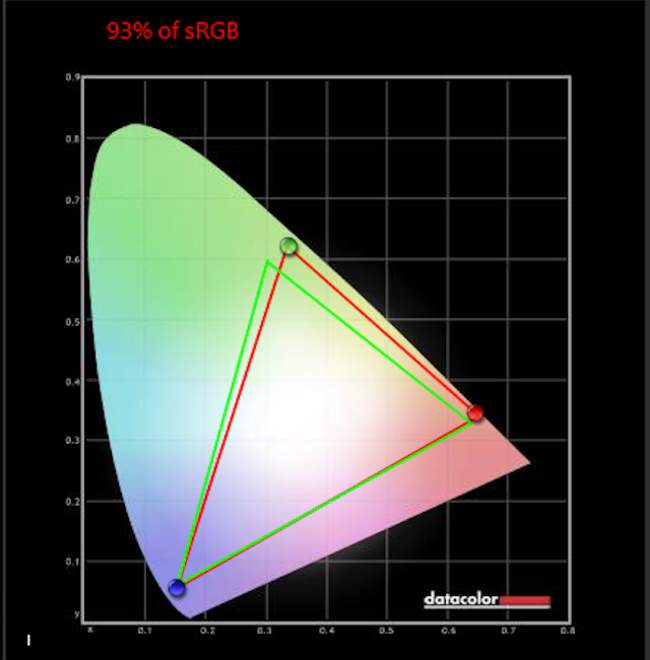 Though the screen was bright enough for use indoors, it left me in want of more nits in sunny areas like balconies. According to our test kit, the display manages 232.6 nits of brightness at max setting. It also made me wish it were a touchscreen panel but that's too much to ask, considering its price tag. On the plus side, the matte finish on the display ensured there was no unnecessary glare. In summary, the VivoBook S14's display can be considered fit for work and media consumption with little to complain about.

Audio quality comes as a pleasant surprise on the VivoBook S14. Sound through the two down-firing speakers on the Thin and Light laptop is loud and clear. The laptop's SonicMaster-powered setup is ideal for light music and VoIP calls inside a quiet conference room. On the review unit, songs like Starboy by The Weeknd and In and Out of Love by Armin van Buuren and Sharon den Adel played with a respectable amount of loudness and clarity across mid and high frequencies when the laptop was placed on a table. Surprisingly, the drivers were even able to reproduce some of the bass in the tracks with a mild thump. In summary, the audio quality of the VivoBook S14's speakers surpasses that of the speakers found on some more expensive laptops—and that's saying something. 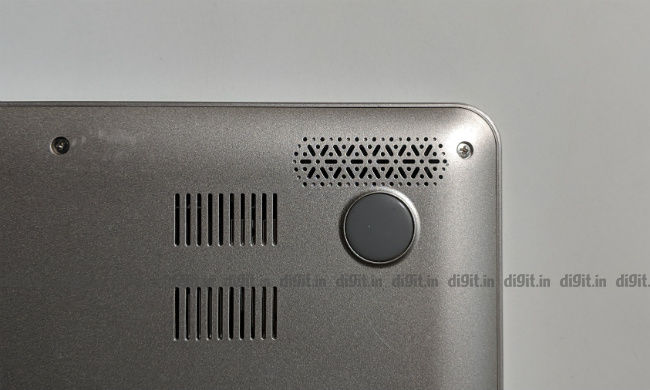 One down-firing SonicMaster-powered speaker on either side

Though it falls in the Thin and Light category, the VivoBook S14 comes with an array of usable ports. On the left, it has a round-pin power port, a USB Type-A 3.0 port, a USB Type-C 3.1 port, and, strangely, a Micro HDMI port. On the right, it houses a USB Type-A 2.0 port, a 3.5mm audio jack for headsets, and a microSD card slot. The VivoBook S14 also comes with a fingerprint scanner on the top right corner of the touchpad, which works swiftly for sign-ins. Video through the 720p CMOS webcam looks grainy and pixelated. 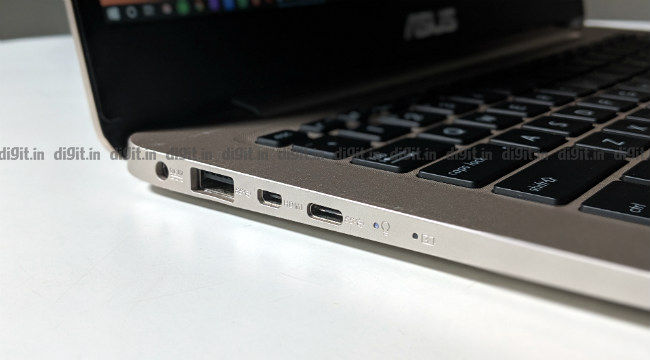 Only Micro HDMI; no full-size HDMI 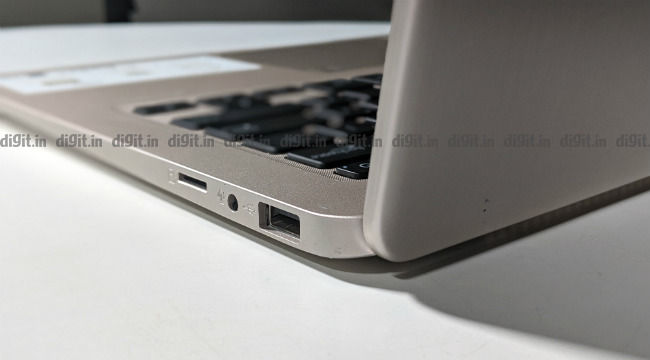 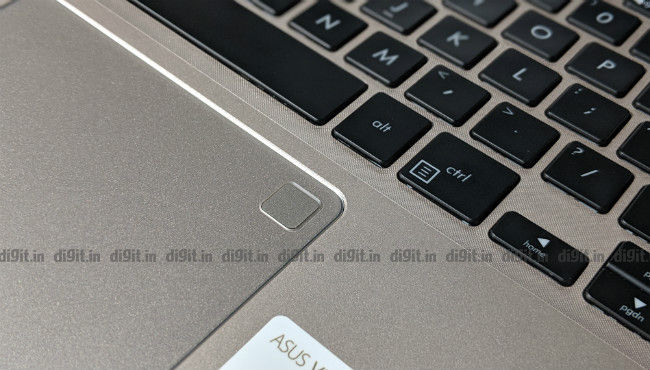 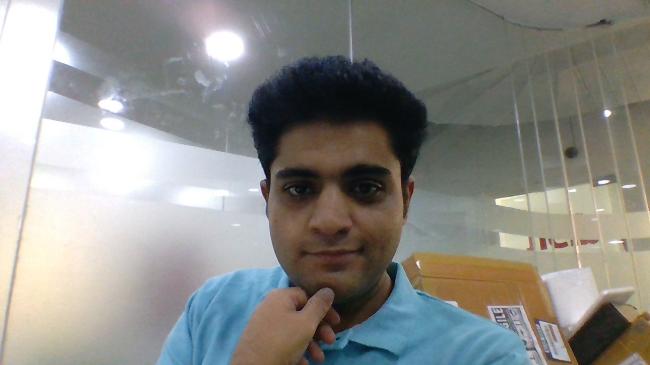 Despite resting on a thin and bendy base, the keyboard on the VivoBook S14 is supremely comfortable for typing long documents and emails. In fact, it's one of the best I have personally observed from Asus. At 1.4 millimetres, the keys have just the right amount of travel and resistance. The space between the keycaps too is just right. The keys are backlit with three levels of brightness, which makes it convenient for use in the dark. In summary, the VivoBook S14 has a neat, comfortable keyboard that's suitable for users who type extensively. Those wanting a numpad will be forced to look at larger 15.6-inch models. If anything, I wish the power button weren't placed adjacent to the Delete key as it can accidentally put the PC to sleep. 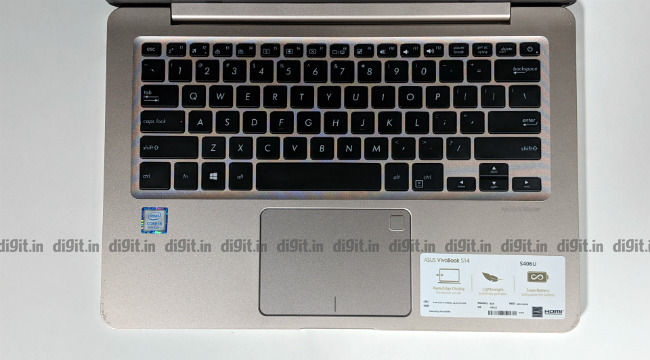 The touchpad on the VivoBook S14 is nearly as good as its keyboard. Being a precision unit, the touchpad is capable of multi-finger taps and swipes without needing any third-party drivers or utilities on Windows 10. Its functions can be modified in Windows Settings. The left- and right-mouse buttons inside the touchpad too are fairly easy to click. The only problem is that every now and then there's some noticeable lag between the physical stroke on the touchpad and the mouse pointer's movement on the screen. 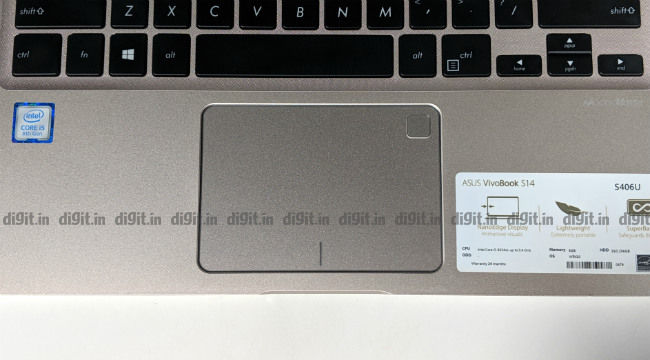 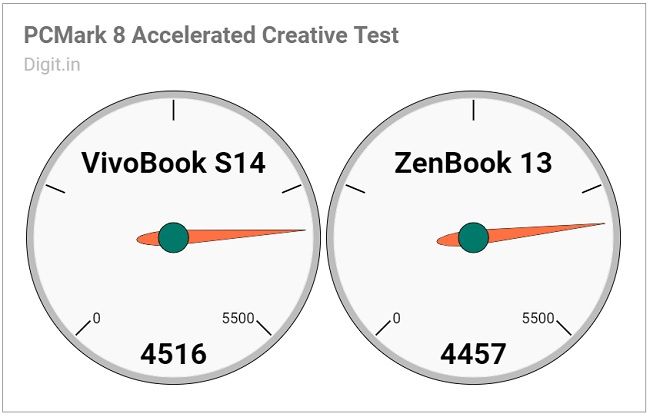 Everyday performance on the VivoBook S14 review unit was pretty good. I was able to use dozens of instances of Chrome along with other medium-weight apps, like WhatsApp for PC, File Explorer, OneNote, Word, Excel, and iTunes across multiple virtual desktops without choking the laptop up. Even though the solid-state drive inside wasn't a PCIe NVMe unit and relied on a SATA III (6Gb/s) interface, everyday document files (as large as 30MB) opened up in less than 4 seconds. Windows too booted to desktop in under 22 seconds, as expected. Copying 37GB of data from a Seagate Ultra Slim SRD00F1 external hard drive through the USB Type-C 3.1 port took about 6 minutes, 30 seconds. 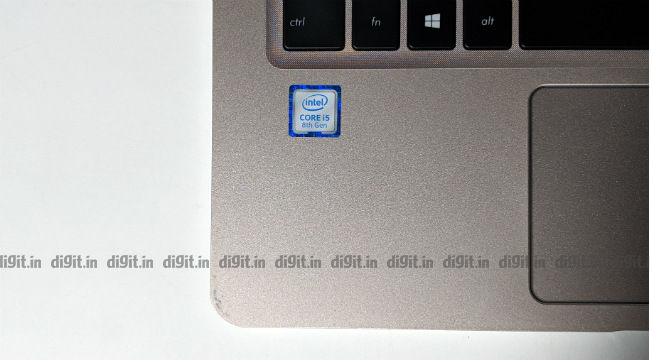 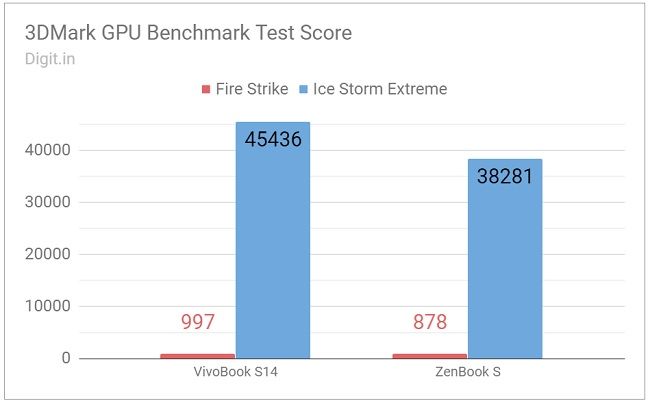 The VivoBook S14 is powered by a 39Wh dual-cell lithium-ion battery that's tucked deep into the laptop's slim body. It's neither upgradeable nor replaceable by the user. In our standard battery test, the review unit lasted 3 hours, 8 minutes, which is on par with the Acer Swift 5. The costlier ZenBook 13 and ZenBook S scored 5 hours, 20 minutes and 3 hours, 48 minutes respectively on the same test. 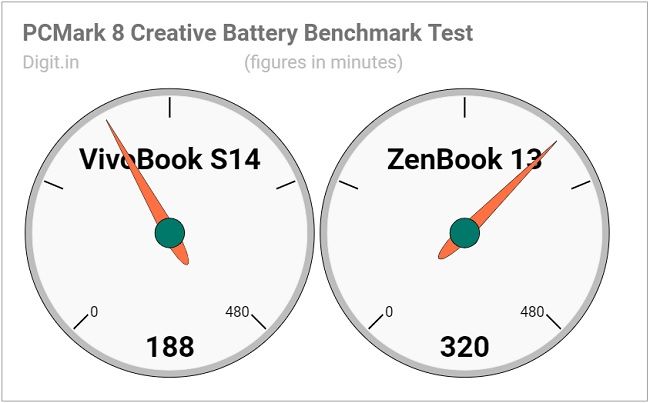 With Wi-Fi and Bluetooth enabled, screen set to 70 percent brightness, the laptop lasted somewhere between four and five hours on a single charge. During one of the test cycles, I put the review unit through continuous sessions of web browsing, document editing, and file transfers. After 3 hours, 30 minutes, the battery had drained from full to 38 percent. While the VivoBook S14 cannot be lauded for its battery life, it can't be criticised either.

I personally love the Asus VivoBook S14 S406U. It's one of the very few models in its price segment to sport the right ingredients for good performance. Intel's 8th Gen Core i5 along with 8GB of RAM should keep the laptop up to date until Intel's 9th Gen line-up flows in. Though SATA, the solid-state drive inside makes a world of difference to the laptop's overall computing speed. The compromise on storage volume is well worth the speed benefit gained instead. What's more, it's got a comfortable backlit keyboard and a precision touchpad. The audio quality is respectable too. 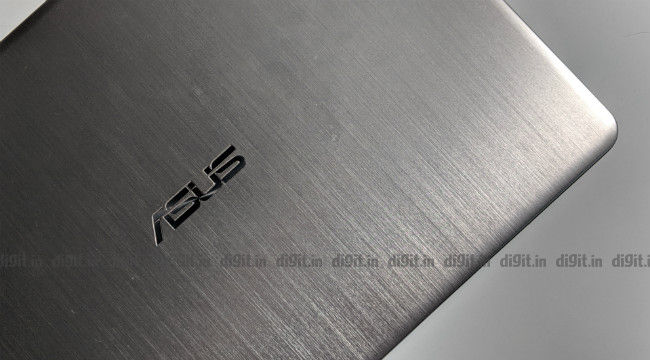 Build quality is undoubtedly the VivoBook S14's Achilles heel. The panels on the laptop look and feel so thin and flimsy that you often feel you're holding nothing more than a motherboard and display panel together. However, if you're a careful user and don't really care about bendy panels on your laptop, the build shouldn't be a big concern. For its market price of Rs 44,990, the Asus VivoBook S14 S406U is a really good buy.