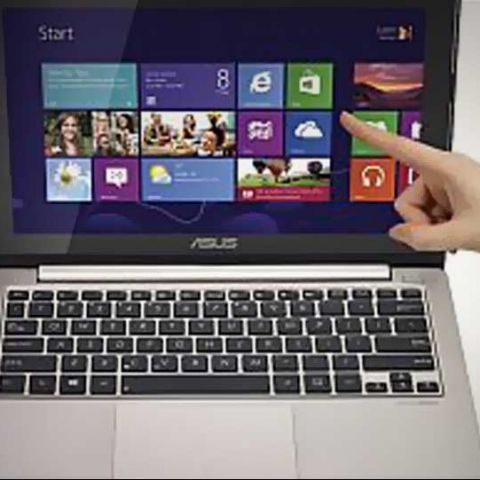 It is quite a surprise that Asus positions this machine as a laptop, and not an ultrabook. But, honestly, we do not mind. The focus needs to be on the fact that it offers fairly acceptable performance in a very compact form factor. Almost the ultrabook-ish compactness, if you may. But, do note that the performance is fairly toned down, and will not be anywhere close to the likes of the Core i3 on the HP Pavilion G6-2227tu. And for the price the F202E is retailing for, the build quality is pretty much the proverbial cherry on the proverbial cake. It is a good deal for someone buying their first laptop and for students who want the portability aspect.

The demand for an affordable entry level touchscreen notebook was becoming fairly loud. Mostly on the back of all the hype about Windows 8 being the saviour of planet Earth. Well, that is a topic of a separate discussion, but Asus did answer that call. The VivoBook F202E, at first glance, would be assumed to be an ultrabook. But, in reality, Asus is positioning this particular machine as a notebook. Not that we mind!

The Asus F202E VivoBook is a rather interesting laptop. Ideally, it should be called an ultrabook, but we are not going to argue with Asus for even a second, considering how good a deal this machine is for anyone looking for buy on a budget.

Build & Design
For an 11.6-inch display size device, the F202E is compact, as expected. It is slightly thicker at the back and thinner at the front, putting the keyboard at a slight incline which really helps with the typing comfort. Take the VivoBook out of the box, and you are immediately surprised at how well it is built. The lid has the traditional brushed metal look we have seen on much more expensive Asus ultrabooks, and that theme carries on throughout the chassis. This influence is more than welcome.

Open the lid, and the clean keyboard deck comes as a secondary point of attraction, the first being the surprisingly generous sized touchpad. While it is not as big as most notebooks, for a machine this size, it is a fairly good size.

For laptops with anything lesser than 13-inch display sizes, keyboard is usually a major point of compromise. In the case of the VivoBook F202E though, the opposite is thankfully true. The keys are slightly small, but not uncomfortably so. The spacing is well managed within the real estate available. But the best part is the excellent travel and sharp key response while typing. The shift, enter and backspace keys have not been messed around with, leaving them with the traditional placement and size we are accustomed to. There are no shortcut keys, and the critical tasks like volume control, brightness and Wi-Fi connectivity are mapped with the Fn keys.

The surprising bit was the size of the VivoBook F202E’S touchpad, which is larger than what we had expected. The separate right and left click keys are marked by the thin divider. We found this to be surprisingly comfortable to use, particularly for the two finger scroll, thanks to the generous real estate.

The VivoBook F202E’S very slim design means the optical drive has been sacrificed. Three USB ports, and the memory card reader are still hanging around, as well as a full Ethernet port (no space saving flaps etc.) and HDMI out. The thickness is the same throughout, but the strip running along the sides does give the impression that it is thinner on the near side and thicker on the far side.

Features & Specifications
The display size is the most unique aspect of this laptop, in this price category. The 11.6-inch touchscreen is the reason why the VivoBook F202E is small, light and portable. The native resolution is 1366 x 768 pixels, which is pretty much standard in this price bracket. The touchscreen is an added bonus, but like we say with most notebooks, you will not be using the touchscreen too often in a typical day at work usage scenario. This is where the very good keyboard and touchpad are very helpful. Coming back to the display – the text rendering is quite good. Even on a smaller than usual display, we found that reading text from the same source was actually not at all any less comfortable than on a bigger 13.3-inch display. And that says a lot, mostly because of the good amount of sharpness for the written word, and lack of any edge noise around each alphabet. Colour richness is quite good, and the black levels were surprisingly among the highest when compared between laptops in this category. But, there will be a slightly more natural colour tone than usual, and that could be something you need to be aware of if you prefer a less vivid tone. The only niggle with this display is that it is a tad reflective, and that is felt more so when the brightness is turned down. The fingerprints, the remnants of when the touchscreen was used, can be clearly seen on the screen till you wipe them off.

The version of the VivoBook F202E retailing for just under Rs. 40,000 is the one that has the Intel Core i3-3217U processor clocking at 1.8GHz, paired with 4GB of RAM. We are happy to note that no major compromises have been made on the RAM amount. A Core i3 processor is fairly standard across most laptops under Rs. 45,000, with the other option being the AMD dual-core and quad-core APU solutions.

The Asus VivoBook F202E does not have an SSD and neither does it have the Express Cache flash storage working in tandem with the HDD, but what you do get is a 500GB hard drive. The machine comes preloaded with Windows 8 (64-bit), but the good part is that there is very limited preloaded software, which helps keep the machine fairly uncluttered.

Performance
For a machine that is powered by a Core i3 processor, we never expected the VivoBook F202E to leave a trail of fire; at least as far as the benchmark tests were concerned. Globally, Asus does have more processor options available, but we do not hold this model as a compromise, simply because the costs have been balanced as well. As a primary laptop, we found the performance to be fairly good. Boot times, and we are talking full boot, are fairly in line with the Core i3 version of the HP Pavilion G6. Apps open fairly quickly, and there is no lag in most usage scenarios. When used as a primary machine in office, we had Chrome with multiple tabs, multiple Microsoft Word documents and Excel spreadsheets and iTunes streaming music in the background, and the performance was fairly good. No slowdowns, lags or app crashes under this load.

During the benchmark tests, the VivoBook F202E handled the stress rather well, again with no crashes or slowdowns, something that even certain more expensive machines did.

Battery life on the VivoBook F202E was clocked at 148 minutes in the battery benchmark test. While it is not the highest, you do need to remember that this is a smaller 3-cell battery as against the bigger 6-cell batteries that most laptops have. As a laptop used in the typical day at work, this lasted around 4 hours with ease. For a small battery, this is not a bad deal.

Bottom Line
For almost the same amount of money, you have the choice of a 13-inch laptop, and a 15-inch laptop. And if you consider the VivoBook we have reviewed here, there is the 11.6-inch option as well. For someone who wants a very portable machine, the bigger laptops don’t really cut it. The VivoBook F202E is basically an ultrabook disguised as a laptop. And we are fairly impressed with the performance and premium build quality, of a machine that does not cost an arm and a leg.