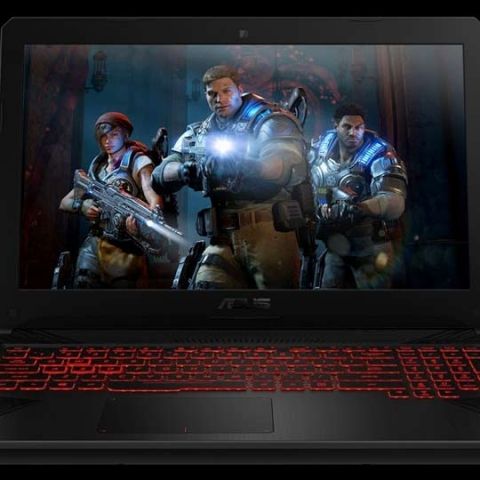 The ASUS TUF Gaming FX504 is a great gaming laptop given that you’ve got the additional 2 CPU cores for no added money. That with the NVIDIA GTX 1050 Ti and the 120 Hz panel make for a much better combination. As for gaming experience, it isn’t completely out of this world as one would expect because of the improved CPU. The display panel is average but we’re not complaining because you get a 120 Hz panel at the end of the day and that’s better than the usual combination. Even with the design, there have been a few welcome changes with the clean surface on the right-hand side and the improved cooler. However, we don’t believe that the overall design is any “tougher” than what’s usually found in this price range. At the end of the day, the FX504 offers way better value for money and that alone should be convincing enough for most gamers.

ASUS recently underwent an entire exercise towards rebranding its lineup. We now see the TUF brand come to fore which was earlier associated with the Sabertooth line of motherboards. The Sabertooth lineup was known for added shielding, additional power phases and for using slightly better rated passive components. While these laptops are clearly not being marketed under the Sabertooth sub-brand, they certainly are being advertised to be tougher than ASUS’s usual laptops in this price range. The FX504 that we’ve received happens to be the better of the two FX504 SKUs. This, in particular, is the FX504GE and sports a price tag of Rs.90,990.

The ASUS TUF FX504 is powered by the Intel Core i7-8750H and an NVIDIA GTX 1050 Ti but without the additional price increment. We were quite surprised to see a newer and better CPU being included for no additional cost and were quite intrigued to see how the competition would match the offering.

As part of the new TUF branding initiative, ASUS has made quite a few visual changes to make the TUF lineup appear distinct. This includes the diagonal cuts over a brushed metal texture that we see on the top surface with the ASUS branding bang in the centre. 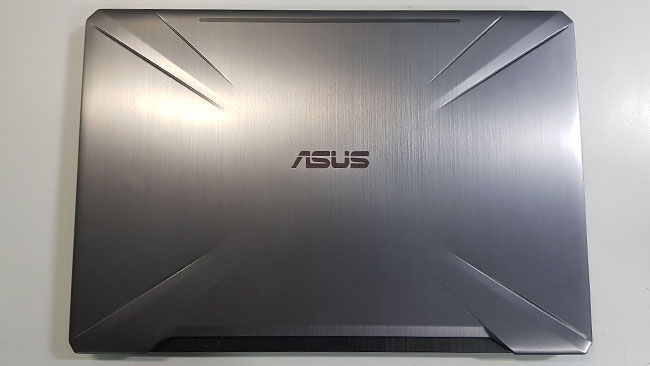 The underside has a few similar markings along with roughly one half the area occupied by intake vents. The laptop is easily serviceable once the 11 screws are removed. There are four rubberised feet to give the ASUS TUF FX504 some traction as well. 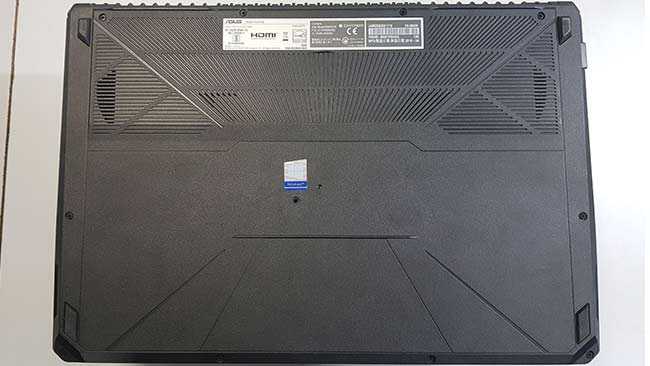 Upon taking the hatch off, we see a fairly standard configuration. There are two cooling fans with two heat pipes, one of which is slightly wider and shared between both devices. The GPU, obviously, has two heatpipes running over it owing to the higher TDP. The chassis has plenty of open spaces that lie unused. Since the unit comes with a single 8 GB DIMM installed, there’s room for another one, although that one will not have any protective film as we see on the existing DIMM. It should be noted that the PCH, SSD and the underside of the hard drive are not protected. While this is normal for a laptop that sells in the 90K price range, it certainly does not mirror the tough-image that ASUS is trying to portray with the new lineup. Another important thing to note is that none of the components that tend to get hot are placed under the palm area. This keeps the touch temperature low when used on your desk. 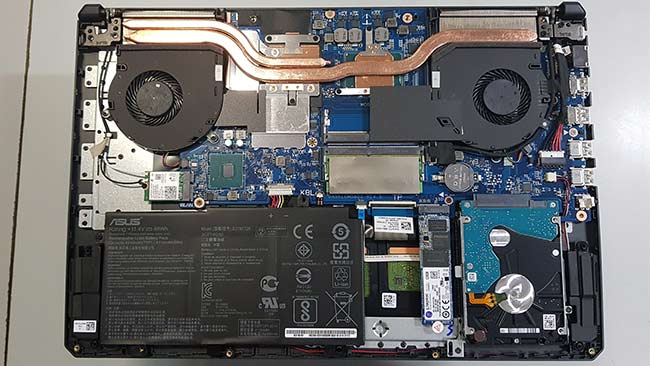 Coming to the battery, we find a fairly huge 48 Wh battery rated at 11.4V taking up a bulk of the space in the lower left. With a bit of proper routing of the keyboard and touchpad cables, ASUS could have squeezed in a larger battery since there’s plenty of open space on the right of the battery. However, this would have bumped up the price by a few K. 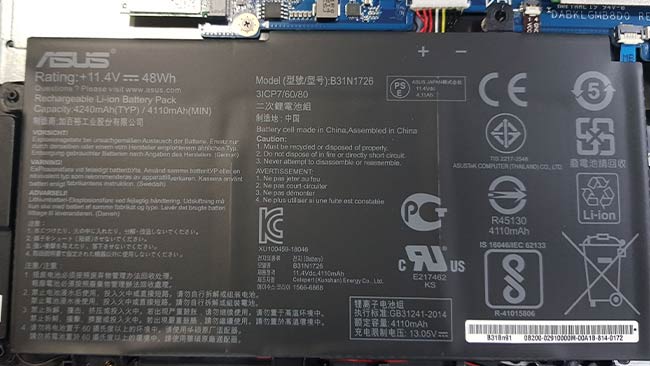 Taking a closer look at one of the cooler, we see the new anti-dust design wherein the larger dust particles have a much wider outlet as see to the left of the heatsink fins. Larger particles tend to clog the vents and this would help reduce the same. ASUS has a nice video demonstrating the same here - Link. The web page for the FX504 also mentions that they’ve incorporated an intelligent cooling mechanism for the keyboard which we don’t see here. 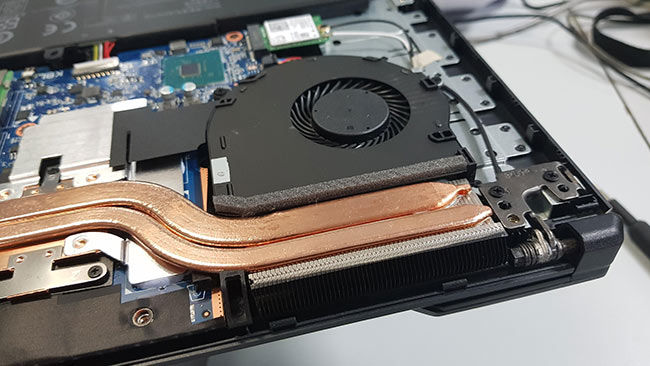 The rear side of the laptop shows two sets of wide outlets on either side.

Since we’re looking at the laptop sides, here’s how they appear. The right-hand side has a Kensington lock slot and is devoid of any other I/O ports. At the very edge, we see the speaker grille. On the left-hand side, there are two USB 3.1, one USB 2.0, an HDMI, Ethernet, power and a 3.5mm audio I/O port. There are two ways to look at this. On one hand, most gamers are rright-handed so the mouse is often placed on the right which is devoid of any cooling outlets. This is obviously better, however, by doing so, ASUS has also been unable to squeeze in an SD card slot.

On the other hand, when we take a peak on the inside, we see plenty of vacant space where an SD card slot could have been provided. The exclusion of the same appears to be a cost cutting measure. We’ll see if the cost-cutting pays off in the end. 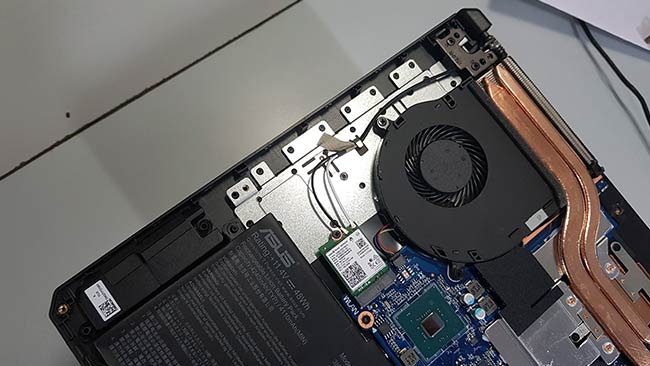 The front side of the laptop is plain and has nothing of note. There are no indicator LEDs here.

Instead, the TUF FX504 has the indicator LEDs placed right at the top edge. With the bottom of the screen panel having a “notch”, these LEDs remain visible regardless of the position of the lid (closed/open). 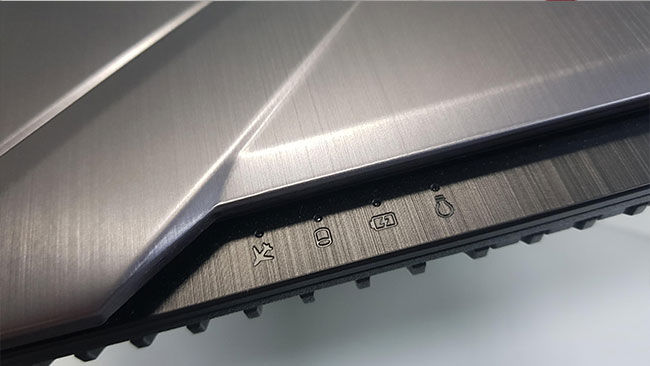 Speaking of the lid, the hinges are fairly standard and main rigidity. And the unit opens up by 140 degrees at its widest. Most laptops in the range tend to open by about 120-135 degrees, so we have a slight improvement here.

Then we have the keyboard which comes with red backlighting and follows the full layout. The arrow keys jut out from the layout making them easy to locate. As for the switches, ASUS says they are rated for 20 million key presses and actuate with 62 grams of force. The actuation point for the keys are said to be a bit higher than the average switches found on most laptops in the rage. 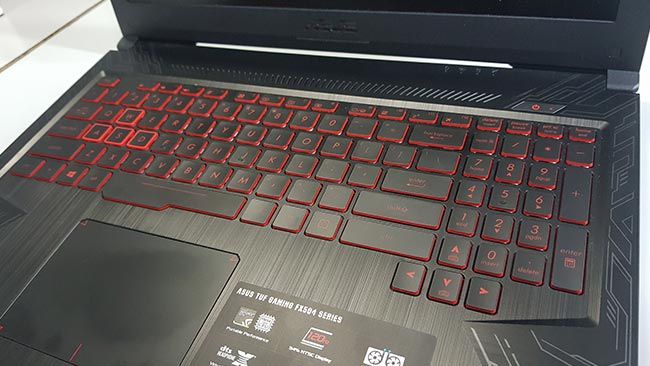 As for the touchpad, it’s fairly huge and has both buttons integrated within the same body. The surface texture is smoother and different as compared to the rest of the palm area and the matte finish works better with tracking. 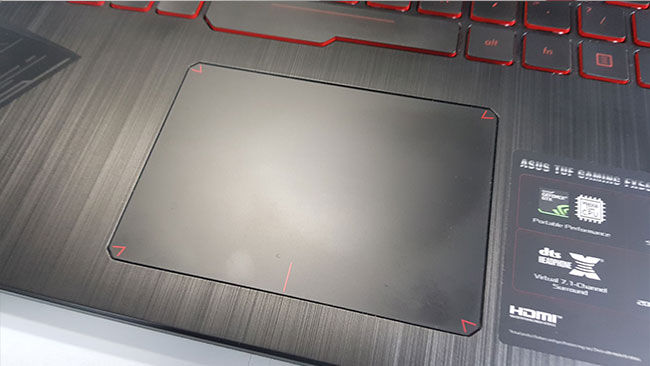 Overall, the ASUS TUF FX504 sports a build that’s typical of this price range. The cooler is certainly a marked improvement and the decision to keep the right-hand side clean to ensure a unhindered gaming experience is also welcome. However, we see that the toughness advertised isn’t visible internally and the absence of an SD card slot does not go unnoticed.

The ASUS TUF FX504 uses an 128 GB NVMe SSD from Kingston which is just about enough to house the boot drive and perhaps a couple of other software. As for the hard drive, we see ASUS is using the Seagate FireCuda 1 TB SSHD which works performs better than the traditional HDDs. 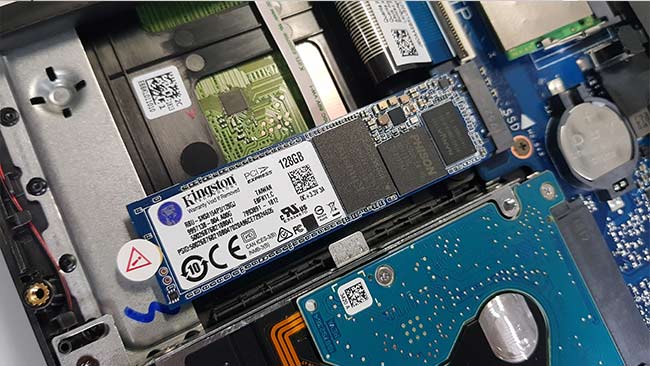 So instead of having a superfast SSD clubbed with a slow HDD, ASUS has gone for a mid-range NVMe SSD and an SSHD giving a better experience. While synthetic benchmarks don’t highlight this right away, normal use does. As for the numbers, the FireCuda clocks in at 128 MB/s (read) and about 117 MB/s (write).

One of the advantages of the ASUS TUF FX504 is that it sports a 120 Hz panel in a price range where 60 Hz is the norm. We’ve seen some of the other manufacturers offer 120 Hz panels in this range but they’re rare at the moment. 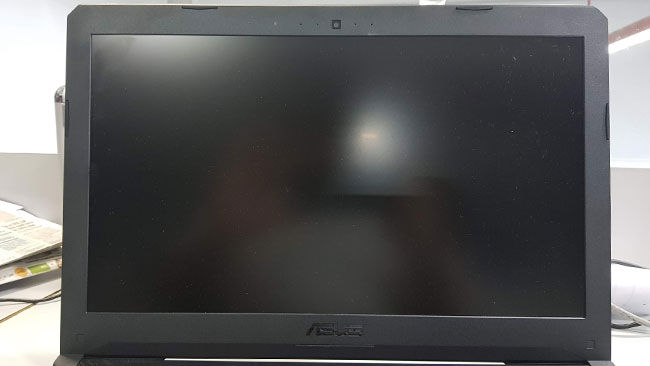 The display panel does not come calibrated out of the box. Very few manufacturers do that. Since this is a TN panel, the colours are not up to the mark and the luminance uniformity is off the mark as well with DeltaE values close to 3. 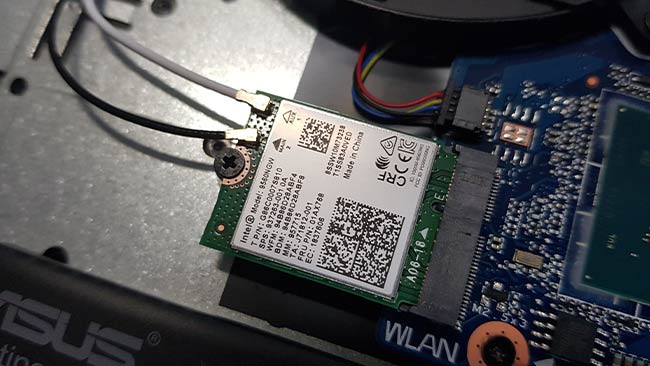 Given that this module allows you to use a wider 160 MHz channel, the throughput is slightly higher than the usual crop of Wi-Fi modules. In our tests, we managed to get uplink speeds of 281 Mb/s and about 432 Mb/s on the downlink.

The ASUS TUF FX504 has the obvious advantage of having the newer 6-core Core i7-8750H CPU which easily tops the previous gen quad-core 7700HQ. That along with the GTX 1050 Ti is bound to allow higher FPS in titles which would have been bottlenecked by the CPU. This would apply to very few games and our tests show the same.

Synthetic benchmarks show a remarkable increase in scores with 3D Mark Fire Strike scoring 7068 and TimeSpy getting 2556 points. On the CPU front, we see a score of 105.36 in Cinebench with the Intel Core i7-8750H as compared to 92.86 that we’ve managed in a similar configuration with the Intel Core i7-7700HQ. That’s quite a wide performance gap.

As for gaming, we managed to get 67 FPS in Rise of the Tomb Raider and 81 FPS in Bioshock Infinite. These are higher than what we’ve seen with the Intel Core i7-7700HQ but the performance gap isn’t as wide as we saw in the CPU tests.

The ASUS TUF Gaming FX504 is a great gaming laptop given that you’ve got the additional 2 CPU cores for no added money. That with the NVIDIA GTX 1050 Ti and the 120 Hz panel make for a much better combination. As for gaming experience, it isn’t completely out of this world as one would expect because of the improved CPU. The display panel is average but we’re not complaining because you get a 120 Hz panel at the end of the day and that’s better than the usual combination. Even with the design, there have been a few welcome changes with the clean surface on the right-hand side and the improved cooler. However, we don’t believe that the overall design is any “tougher” than what’s usually found in this price range. At the end of the day, the FX504 offers way better value for money and that alone should be convincing enough for most gamers.