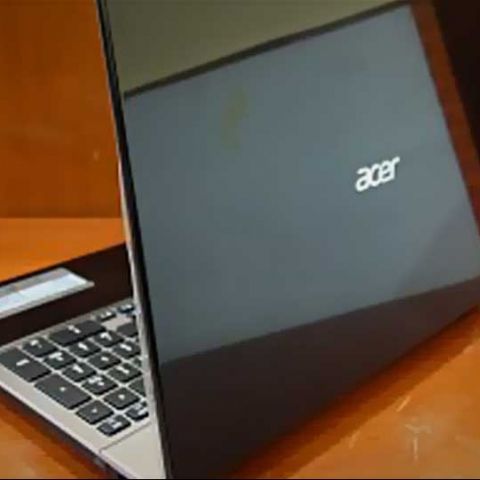 If you can get past the glossy finish, the package is rather impressive. Offering great build quality at its price, it delivers good system performance as well, with the potential for gaming. It is worth considering on a strict budget, as it pretty much ticks all the boxes.

There are the run of the mill laptops, and then there are the ones like this Acer Aspire V3 machine that stands out in amongst those traditional machines. In this case, the fairly powerful graphics card, at this price point, makes this a rather interesting laptop.

Build & Design
Just like last year’s version, the 2013 refresh of the Acer Aspire V3 has the completely glossy finish. That is because the chassis and the design have been carried forward as is. The piano black finish looks brilliant initially, but it doesn’t take too long for the dust, the fingerprints and even the slightest of scratches show up, rather stare back at you.

Open the lid, and the silver base around the keyboard adds a dash of shine that contrasts well with the black colour. All the ports are placed on the two side spines. On the right side, assuming you are looking at the display head on, are the optical drive and two USB 2.0 ports. On the left is the HDMI, USB 3.0 one, the headphone and mic jacks and a mighty cooling vent. We have been noticing a trend of late that certain ports are placed on the rear panel, particularly with some ultrabooks. However, there is no thankfully fancy placement stuff here, and the comfort level with ports on the sides is unparalleled. The memory card slot is on the front left corner, close to the notification LEDs.

Apart from this niggle with the lid, we must say that the way the new Acer Aspire V3 has been put together is very impressive. We did not find any rough edges or any glaring problems with the build quality. Keeping the price factor in mind, the machine has the humble plastic for the most part, but that is fairly good quality. There is hardly any flex in the lid, only seen when you are being unnaturally brutal with it. There is No dip in the keyboard, no matter where you may press to test. The way the keyboard has been put together is reminiscent of how HP does it on their higher end ENVY dv6 machines. The Aspire V3 is not the slimmest machine around, but for what it finally is, it will not disappoint with the quality.

Features & Specifications
The machine that we have tested has the Intel Core i3-3110M processor clocking at 2.4GHz, and is paired with 4GB of RAM. This seems a little less, considering the Sony Vaio SVE15127CNB and even the Acer Aspire V5-571G-53334G50Mass both have Intel Core i5 processors.

Acer has packed in a 750GB hard drive, compared to the 500GB the Sony Vaio SVE15127CNB and the Acer Aspire V5 has. The 15.6-inch display has a resolution of 1366 x 768 pixels, which is fairly standard across laptops in the Rs. 40,000 – Rs. 50,000 price band. What we like about this display is that it is very bright, and much sharper than most displays you would get on laptops for this much money. Excellent for multimedia usage, but the slightly reflective nature makes it a tad uncomfortable for reading text.

The new Aspire V3’s keyboard is one of the bright spots, even before we got down to the actual testing. It is very well laid out, with brilliant spacing throughout. The touchpad is fairly big, with lots of real estate for the multi-touch gestures.

Performance
When pitting the scores of a notebook with a Core i3 processor against two that have the same generation Core i5 processors, all sensible people would expect a landslide against the poor little Core i3. However, a lot does depend on how well the OEM has optimized the hardware package to work with the OS, keeping all other things (like the OS updates, driver versions and benchmarks) constant. And that is proved by how the Acer Aspire V3 shows up against the other two in a series of benchmark tests.

First up are the system benchmark tests. The PC Mark 07 test clocks the Aspire V3 doing 2373 points, which is more than the Sony Vaio SVE15127CNB and lesser than the Aspire V5. Do remember, that despite a lesser processor on paper, the Aspire V3’s Core i3 processor scores rather well. We had talked about OEM optimizing the hardware and the software to work well together, and it is clear that Sony has not bothered with that too much. The Cinebench CPU scores show that the Core i5 on the Vaio has the lowest score among all three.

Graphics was always going to be the Aspire V3’s strong point, with the only possible bottleneck being the processor itself. In the series of gaming benchmarks, the GT640M is decidedly ahead of the Radeon HD7650M and the older Nvidia 710M.

Tested battery life on the Aspire V3 was timed at 107 minutes. This is pretty close to touching nearly two hours in the fairly stressful battery test. In a typical day at work usage scenario, expect 3 hours of backup on a single charge. The other two machines are pretty much on the same platform as the Aspire V3, with very marginal time difference.

Bottom Line
If you can get past the very glossy finish, the rest of the package is rather impressive. It has been put together a bit extremely well for a machine that is selling for around Rs. 40,000. It offers very good system performance, and the potential for gaming with the Nvidia GeForce GT640M on board cannot be denied. It is worth considering this if buying on a strict budget, because it pretty much ticks all the boxes.