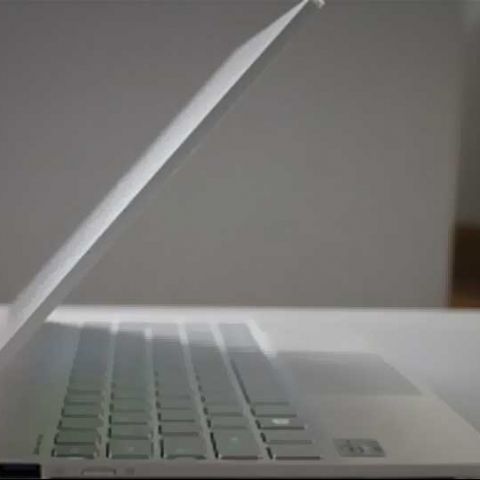 The Aspire S7 is one of the best ultrabooks we have tested so far, and with its touchscreen display, it is built specifically to be used with Windows 8. The build quality is also brilliant, the looks are premium, and it houses a powerful processor inside. The RAID 0 SSD setup is the fastest we have seen in an ultrabook and transfer speeds are ridiculous.

Acer Asire S7 also bundles in a wireless mouse and an extra battery pack which add a lot of value to the whole package. There are very few things we did not like about the S7 except for one thing - Pricing. Agreed, Acer is addressing the premium segment with this beautiful ultrabook. But a price-point of close to a lakh for an 11.6-inch ultrabook is a bit much.

We recently had a look at some of the features and design elements of the Acer Aspire S7. We will not repeat those pointers and jump straight into the performance parameters.

Keyboard, Trackpad and Mouse
The keyboard is well laid out and the keys have a great response even though they are thin. The only issue with the keys is that they do not have enough travel which seems necessary to keep things on the slimmer side. For people with large fingers it may take some practice to get used to it. The reviewer did not have any issues with the keyboard as such and it didn’t affect his typing speed. For an ultrabook with such a form factor, there is optimal space for the palmrest. The edges are sharp though but do not bother you much, specially so when you are using the ultrabook with the battery pack attached, as it gives a slight angle to the palm rest which is great.

The trackpad was quite responsive with the gestures and despite it being a single block of plastic, the right and left clicks registered well. The trackpad does tend to get warm on using resource intensive applications such as benchmarks. The region just above the keypad gets considerably hot and you can actually hear the fans whirring when the CPU utilization is well over 85 per cent, as we noticed while running 3D Mark 11 and PC Mark 7 among other benchmarks.

The keypad backlighting works quite well in dark conditions and there are three levels of backlight brightness. The mid-level tends to merge with the silver-hued keys when you are in a perfectly lit room, making it difficult to decipher the alphabets. Since it is an 11.6-inch ultrabook, there is no dedicated numpad or function keys. In fact, the top two rows of the keyboard are mixed with function keys. The placement of the Delete key is on the left hand side of the arrow keys, which are smaller in size as compared to the regular keys.

Acer also bundles in a Bluetooth mouse. It has a decent build quality despite being an all-plastic body. It has a glossy white top and the design is very ergonomic, with the left and right keys responding flawlessly.

Before we discuss the benchmark scores, we would like to clear out a few things. So far, we have run benchmarks using a clean install of Windows 7 Ultimate (64-bit) but we had to test the benchmarks on this machine on the Windows 8 installation. We tried to create a separate partition to install Windows 7 Ultimate but the ultrabook did not allow us to do that. Even on reinstalling the Windows 8 OS, to get rid of the bloatware that is bundled in with the ultrabook, the S7 tended to give us a copy removing only stuff that we had downloaded and installed, thereby keeping the extra software there. So the scores which will be compared with Windows 7 based ultrabooks are just an indication of the prowess of the Aspire S7.

Performance
The Aspire S7 packs in an Intel Core-i7 3517U processor which runs at 1.9 GHz. This is the same processor that was seen in the Samsung Series 9 (NP-900X3C), Lenovo IdeaPad U410 and ASUS S56CA among others. 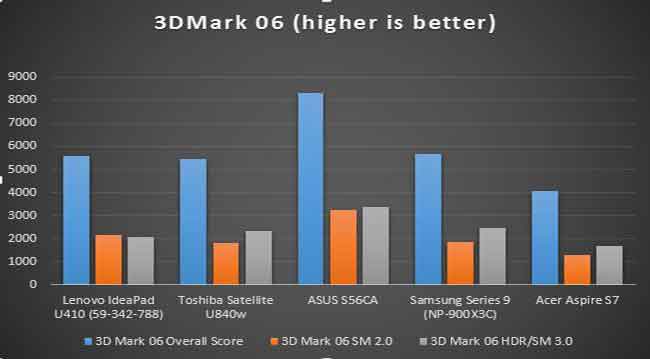 Starting with the PC Mark Vantage score, the S7 failed to give us an overall score as it could not complete certain tests such as TV and Movies score, Productivity score among others. But thanks to the dual 128 GB SSDs arranged in a RAID0 configuration, it gave an HDD score of 49063 - the highest we have got on any ultrabook tested this far. This was further validated when we ran the Crystal Disk Mark 3.0 test getting mind-blowing speeds of over 900 MB/s sequential read and 700 MB/s for sequential write. Even the random read/write speeds were over 600 MB/s. 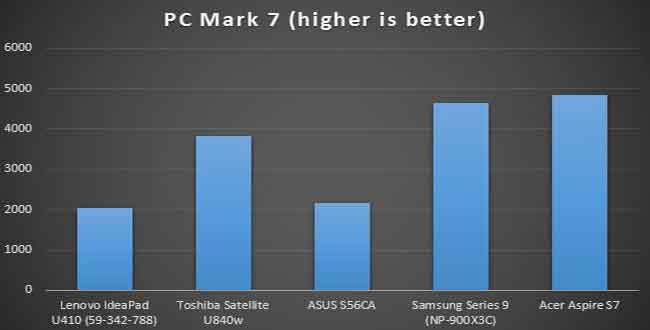 The PC Mark 7 Score was the highest among all the ultrabooks standing at 4829 which was 182 points over the Samsung Series 9 ultrabook which was the leader so far. The CineBench R11.5 multi-core rendering score was a respectable 2.58 which is lower than the 2.79 offered by Asus S56CA, Lenovo IdeaPad U410 as well as the older Acer Aspire S3, but you need to keep in mind the different OS and all the extra apps that are pre-installed.

Graphics
The Aspire S7 does not have dedicated graphics, so the graphics test were run on the integrated Intel HD 4000 which is good enough. On a machine like this gaming is going to be disappointing thanks to the small screen size. The CineBench R11.5 OpenGL score was 15.07 which was lesser than that of the Samsung Series 9. 3D Mark 06 gave a score of 4069 whereas 3D Mark 11 gave an overall score of 1021 at Entry level settings which was only slightly lower than that of the Lenovo U410 which also houses a dedicated NVIDIA GeForce GT610M graphics. We did try out the Resident Evil 5 benchmark at 1280x720 with medium settings and got a playable 30 fps. But we doubt this ultrabook will be used for gaming purposes, so the gaming scores are not really relevant here. But just in case your young one wants to play some, this machine is more than capable of handling games such as Cut the Rope.

Video Quality
The high-res screen bundled with a glossy Gorilla Glass display ensures a great movie viewing experience provided you are not behind direct source of light. The blacks are quite deep and while watching BBC’s Planet Earth series, the details such as feathers of birds, ripples in the water among other things looked great. The screen does tend to become reflective in solid dark scenes, but otherwise the glossy surface does not reflect much. Skin tones looked very rich while watching HD clips and the colours appear vivid. The smudges on the display are quite prominent in a dark scene. Not to say that the display is a smudge-magnet, but prolonged usage does tend to leave marks and you will not have oil-free fingers always. One way to prevent visible smudges is to watch HD movies on this ultrabook regularly:)

Touchscreen
The Aspire S7’s touchscreen is decently responsive while you are working in the centre. But while using the edge-gestures we noticed that the response was not 100 per cent accurate. Even the trackpad edge-response was a hit and miss affair. The gesture on the left hand side of the trackpad requires a slow sliding of your finger from the non trackpad area to the trackpad area to register the gesture for looking at recently opened apps, the right hand side gesture for the Charms bar works fine.

Audio
Audio clarity is quite good and we did not hear any distortion with our test songs even at 100 per cent volume level. The speaker under the base of the S7 tends to muffle sound, if you have the S7 on your lap. The volume levels are not that great, we have heard louder laptops and ultrabooks. The mids were great, but it wasn’t so great with low frequency sounds. The bass intro in Porcupine Tree’s Hatesong is barely audible. It is great for casual listening while you are working.

Battery life
The Acer Aspire S7 ran for a good 315 minutes (with the battery bar attached) in our stress test which involved playing a video on loop with all power saving options disabled. While the battery bar provides juice for over two hours, the S7’s onboard battery lasted for the remaining 3 hours. For average use with the battery bar, you can easily use the S7 for close to 8-9 hours which is pretty good. In fact, the battery life test on the S7 was the best amongst all the ultrabooks tested so far. 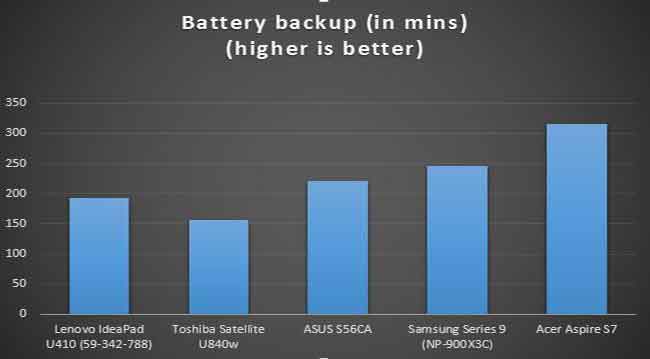 Windows 8 and Acer apps experience
Since Acer Aspire S7 was built primarily with Windows 8 in mind, with the touchscreen display, it does feel quite intuitive to use the touch and type input system. All those who have been contemptuous of the Windows 8 Live Tile display, should try it out on a touchscreen laptop to get the best experience. Having said that, there were certain niggles such as Windows 8 apps occupying entire screens. Now this is great in say a news app, but with an app such as a clock or a calculator, it is just a waste of screen real estate. The Windows 8 app ecosystem is still not very extensive, but it should get better over time.

Acer also bundles in its own app store called the Acer Explorer which has limited apps for productivity, gaming, social media etc. Acer also has desktop applications such as Acer CloudDocs, Acer Recovery Management - which lets you restore your ultrabook to factory settings or create customised restore point, Acer Backup manager among others. The S7 also comes bundled with other third party apps such as Skitch - a basic photo-editing tool, game like Cut the rope, Evernote, Social Jogger among others. You can download more apps from the Windows Store.

Verdict
The Aspire S7 is one of the best ultrabooks we have tested so far, and with its touchscreen display, it is built specifically to be used with Windows 8. The build quality is also brilliant, the looks are premium, and it houses a powerful processor inside. The RAID 0 SSD setup is the fastest we have seen in an ultrabook and transfer speeds are ridiculous.

Acer Asire S7 also bundles in a wireless mouse and an extra battery pack which add a lot of value to the whole package. There are very few things we did not like about the S7 except for one thing - Pricing. Agreed, Acer is addressing the premium segment with this beautiful ultrabook. But a price-point of close to a lakh for an 11.6-inch ultrabook is a bit much. So while the product is great, the pricing is off the charts.

If you want to get a Windows 8 ultrabook with a touchscreen, this is undoubtedly a great option. We would not say this is the best out there, until after we test more competing Windows 8 ultrabooks. But when compared with the Windows 7 generation, it features at the top.