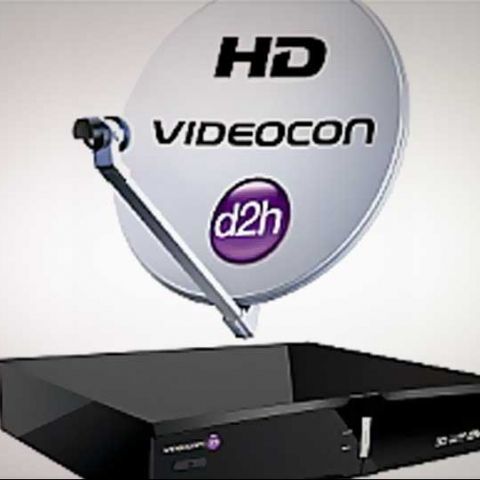 The real attraction for buying a Videocon d2h HD connection is the number of channels it offers, both SD and HD. Picture quality is excellent, across all channels. However, serious issues plague the offering, led by poor quality hardware and the sluggish on-screen UI. Unless you really want certain channels that Tata Sky doesnï¿½t offer, we believe the latter is a much better bet still.

The Direct to Home (DTH) battles are being fought as fiercely as ever. The phased rollout of digitization across the entire country is giving all DTH operators to add a huge chunk of subscribers at each interval, numbers that usually may not have come so easily in the normal course of things. In the end, it all depends on how the operators can entice consumers, with the primary aspect always being channel packages. Videocon d2h has a fair amount of advantage in that regard, since it offers the maximum number of channels, ahead of the likes of Dish TV, Airtel Digital TV and Tata Sky.

Installation
The typical setup for Videocon d2h has well. The outdoor equipment includes a dish antenna, a dual LNB and two parallel wires connecting the dish to the set top box. Indoors, there is the HD DVR box (also referred to as a set top box at times in this review) connected to your TV via HDMI. While we have seen some installations that make do with only one wire coming down from the dish and getting upgraded to a parallel connection using a splitter somewhere in the line, the installation team from Videocon refused to do any such temporary measures, even though it would have meant considerable time and effort saving on their part.

Any drilling for getting the wires indoors were done quickly and precisely. It is imperative that the dish is installed at a place that does not have any interference in the direct line of sight to the satellite, and the installation team usually lists all options possible at that location for you before the installation proceeds.

The Videocon d2h installation team was very polite, doing the job very quickly and professionally, with minimal fuss. The immediate area’s support team was in the meantime helping out with the product activation process. On that particular day of the installation at our end, there were some server issues, and the activation did take a couple of hours.

Set Top Box Build
The HD-DVR provided by Videocon has pretty much the same specifications as the Tata Sky HD and the Airtel Digital TV HD Recorder. All have the 500GB hard drive internally, with the only difference being that Airtel uses a 3.5-inch hard drive while the other two use a 2.5-inch hard drive. No difference in terms of read/write speeds and performance though.

At the front of the Videocon d2h HD-DVR are the power key and the channel up and down key. There is a tiny display that shows up the channel number when in use, the current time when in standby and the pause and fwd/rew status when playing back recorded content. There is the notification for power on / standby, but surprisingly, no notification for when a recording starts or is in progress. From our experience with Tata Sky HD and Airtel Digital TV HD Recorder, the red notification LED on the front lets you know when a recording may be in progress, useful when the TV may actually be switched off.

There is a single power cable that goes into the Videocon d2h HD-DVR box, from the plug point. There is no power brick in en route, something that the other two DVRs have.

Remote
The remote that comes with the Videocon d2h HD-DVR is taller than the one with Tata Sky HD and Airtel’s DVR. The white and black colour combination looks good, but there is that plasticky feel throughout. The channel change and volume control keys are well placed, bit the other keys are a bit of a jumble. Your fingers never really get the memory of where most of the keys like menu, options, guide, info, mosaic, active services etc. are. Among the three, only Airtel DTH offers a universal remote with their HD Recorder, but Tata Sky HD has the best remote in terms of build quality, the experience of using it and the key layout. 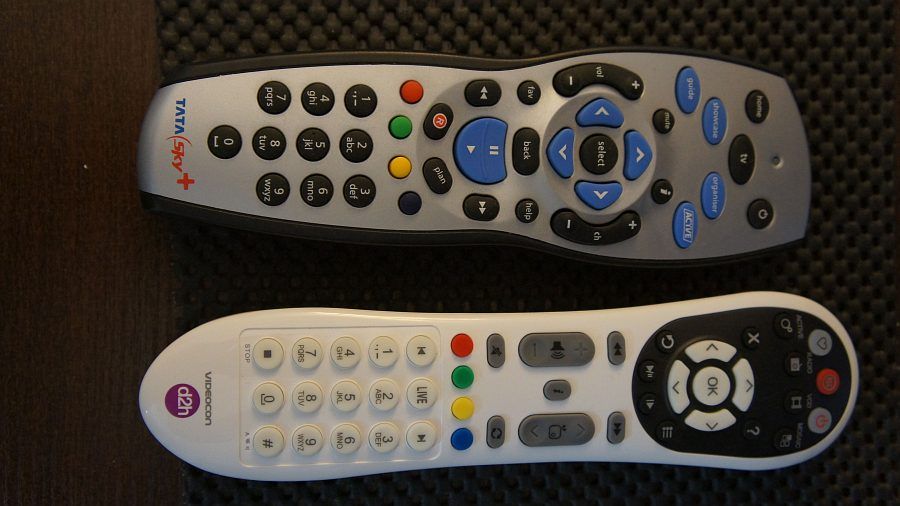 We believe that Videocon used to offer a universal remote at one point of time, and it is a tad perplexing that they discontinued it!

Performance
What attracts you to the Videocon d2h service is the sheer number advantage in terms of the channels on offer, over the rivals. Only Dish TV comes anywhere close, to be honest. However, that is half the job done. If the user experience falls short, then we do have a serious problem. That is something, unfortunately, Videocon has not been able to prevent with the HD-DVR offering.

Post installation and activation of Videocon d2h, you get to use the service in detail, something you may not be able to do fully at a demo zone or at a store. We did exactly that – used it as the primary DTH connection everyday – and the results are rather disappointing.

The positive points first. The picture quality on almost all SD channels is very good. On the same display with the exact same picture adjustments, the SD channels on d2h look considerably crisper than on Tata Sky and Airtel Digital TV. The quality of HD channels on Videocon d2h is very good as well, and at par with Tata Sky. But, Airtel Digital TV offers the best HD channel clarity – crisp, bright and rich colours. Speaking of which, all channels on Videocon d2h have fairly subdued colour richness, side by side comparison with Tata Sky on the same TV with the same settings. We had to bump up the colour slider by 20 points on the TV to get a relatively similar colourful picture as Tata Sky.

Audio on Videocon d2h is definitely clearer than Tata Sky on some channels, because of lesser processing by the DTH operator. Take the example of the National Geographic HD channel. Tata Sky has fairly butchered the audio, something very noticeable because we were using a 5.1 channel setup. On Videocon, the audio was as it is largely supposed to be. Full marks to Videocon d2h for the clarity on all channels, and for audio the way it is supposed to come across all five speakers!

The Videocon d2h HD-DVR features are pretty similar to Tata Sky and Airtel Digital TV HD Recorder. You have the ability to schedule recordings via the program guide, set up time based recordings and pause and rewind live broadcasts. However, till now, we have not been able to figure out to set up series link recordings for certain daily shows that we watch on Star World HD. Select the program from the EPG, and go into the details. You get the option to set up reminder, record or find a repeat of the program. However, we could not find the option to set up a series link that will record new episodes every day. The same task is much simpler and easier to accomplish in Tata Sky and Airtel Digital TV Recorder.

First up, the Videocon d2h user interface has a couple of issues. The layout is not very intuitive and it does take a while to understand the way around it. And this includes going back from a particular spot in the menu, to let’s say the main menu. Sometimes the X button is supposed, and sometimes the return key works. Surprisingly, the channel tag key and the return key do the same task, so why have two keys cluttering up the remote? Once you get beyond the navigation bit, the layout does seem a tad too boxy and dated. Compare this to what the likes of Tata Sky ad Airtel Digital TV offer, and you get the picture.

We faced some serious issues with the HD-DVR that was installed after we had purchased the connection. Sometimes, it just hangs and refuses to change channels – unplugging crudely and them reconnecting the power after 20 seconds is the only solution. The start-up time takes longer than the Tata Sky HD box, but almost the same time as the Airtel Digital TV HD Recorder. Unlike the standard Videocon d2h HD box that starts up at the channel you last saw before fully shutting it down, the DVR starts at the Home Channel with the advertising blaring at you from the first minute. This is something that is annoying across all DTH operators. There are times when you press the channel or channel – key and while the EPG (Electronic Program Guide) changes accordingly, the channel doesn’t! Now, when you press the channel change key again, the DVR changes two channels.

Update: The local area technical team from Videocon d2h, after seeing the sluggishness of the DVR box installed at our place, took it upon themselves to provide an update for the software. A couple of days later, they had a new software copy installed on the box, via the USB drive. The UI remains the same. Happily, the channel change speed has slightly improved, and since the update, we have not faced the “EPG change but channel doesn’t” issue. However, it still remains very sluggish, and most of the other issues remain.

Bottom Line
Videocon d2h attracts you with the sheer variety of channels on offer. But, there are issues with the quality of hardware and the problems with the software that sour the experience. Until and unless Videocon can solve these issues, at least the software ones urgently with the next upgrade, we would have to hold back and not recommend the service. The extra channels over the rivals is a good attraction, but the problems are a tad too annoying to live with on a daily basis.

As for the alternatives, we believe your choice would be restricted between Tata Sky HD and Airtel Digital TV HD Recorder. If you are a huge sports fan, the lack of ESPN HD and Star Cricket HD on Airtel could be a bit of a turn off. Tata Sky misses out on two popular English HD movie channels – Zee Studio HD and Movies Now HD. Airtel has the rights to the SD versions of the two new premium HBO channels – Hits and Defined. Yes, Tata Sky has lesser channels on offer, but there is absolutely no doubt that most of the popular HD and SD channels are there on the platform. And the good quality hardware, slick UI and a premium offering mean you will face a consistent and problem free usage experience.