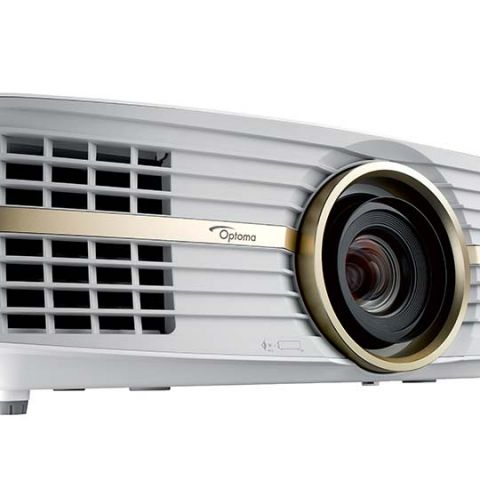 The Optoma UHD65 is leading the charge for budget 4K HDR projectors. It sports a clean and classy design, and runs quite silent. One place where it falls short is the brightness of the lamp which could certainly have been in the 3,000 lumens range for the retail channel price that Optoma is quoting for the device. The picture quality is pretty good otherwise with near equal REC 709 reproduction. If you're getting the unit online, then the price is certainly justified, otherwise, it's a bit too much.

Projectors aren’t economical, not even by the farthest means. Each additional feature on a projector comes at a premium when compared to large format televisions. Breaking that stereotype is the Optoma UHD65, a 4K projector that is merciful on your pocket. The Optoma UHD65 is even HDR compatible, so the upcoming slew of 4K HDR content can easily enrich your multimedia experience if you have the right hardware. So does the UHD65 fit the bill? Let’s find out.

The Optoma UHD65 uses a single-chip DLP solution from Texas Instruments and was one of the first batch of models to sport the new UHD chip which has received quite a bit of attention by itself. The 0.66-inch DMD is practically the same size as the existing ones used in mainstream Full HD projectors and has a native resolution of 2716 x 1528 pixels. Throw in an optical actuator and you can build 4K images with the smaller chip resulting in massive cost savings which then percolate down into the product’s pricing. Hence, you have a 4K HDR projector for Rs.4,25,000. That’s the official price, you can get it for much cheaper online for about Rs.2,41,383 but Optoma doesn’t sell officially online. 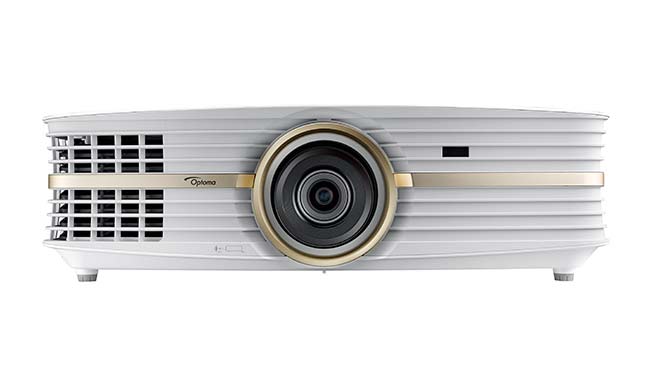 The UHD65 is by no means small, it stands at 49.8 x 33.1 x 14.1 cms making it quite an imposing presence in your living room. It packs a 2200 Lumens lamp which runs quite hot at peak brightness levels. However, thanks to the larger size of the projector, there’s a lot more space for a larger heatsink. So the Optoma UHD65 ends up using a bigger heatsink that’s cooled by a fan with lower RPM resulting in much lower noise levels at the end of the day. However, after a brief session with the projector, the lamp assembly feels quite hot to the touch. Frankly, we prefer a projector that’s silent over cool since the former helps with the overall ambiance of a home theatre.

For the asking price of Rs.4,25,000 we’d want more customizability than what budget projectors usually ship with. The UHD65 comes with vertical lens shift which is a welcome feature but there’s no horizontal lens shift. The former is admittedly more utilitarian than the latter but we’d have liked to see both in the UHD65. If the price were around Rs.2,50,000, then we’d excuse the missing horizontal shift. 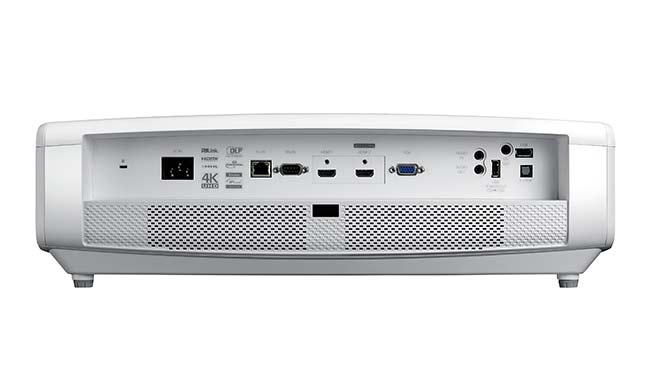 Lastly, the UHD65 has plenty of connectivity options starting with an ethernet port, two HDMI ports of which one supports HDCP 2.2 and MHL. Then there’s an RS-232 for serial comms, VGA and two USB ports of which one outputs 15 Amperes. For the audio there’s digital S/PDIF and analog 3.5mm I/O. 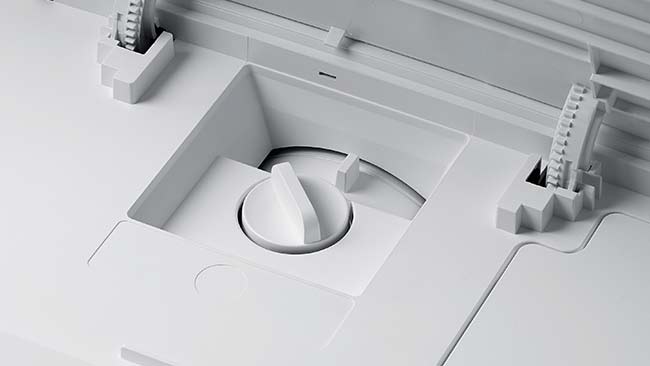 The overall look and feel of the UHD65 is classy with no controls that jarringly stand out. The Indian SKU has a white body with golden accents while the International version switches out the body colour for black. The top surface bears a clean finish with a flush panel that hides the lens shift and zoom levers. The entire control pad merges very well into the side. Then there are the cooling vents which open up on diagonally opposite sites on the sides of the body allowing for easy cross flow. 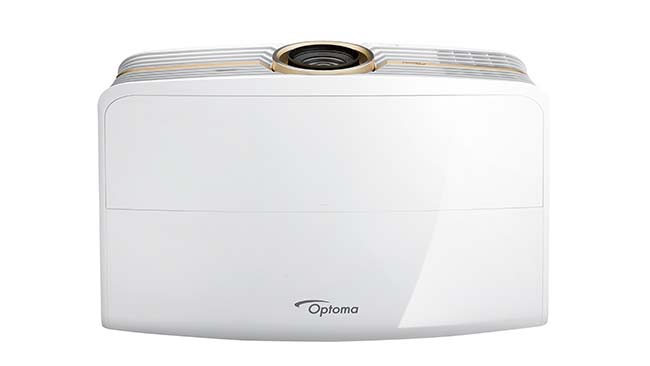 Overall, the UHD65 has an above average build but misses out on certain features that are expected at its retail price point.

Given that the UHD65 has a 2,200 lumens lamp, it doesn’t stand up to the lower-end models such as the HD27 which have a 3,200 lumens lamp. In this case, if you want comparable brightness then the UHZ65 comes into view. The UHD65 is bright enough for a room with the curtains drawn but on a sunny day in a well-lit room, the brightness of the unit falls short.

One of the features that many display devices ship with is frame-interpolation technology. In the case of Optoma, it’s called PureMotion where subsequent frame are used to generation more intermediary frames. All with the end goal of making things seem more fluid. Unfortunately, none of the display manufacturers have perfected this technology. Frame-interpolation certainly makes objects within the image clearer but brings with it an unnatural feel. It’s called the soap opera effect and we aren’t great fans of the technology. If you want high-frame rate in your multimedia, get the right source.

The Optoma UHD65 has really good colour reproduction, especially in the Reference mode which is the closest to the Rec 709 standard. Switching to any other mode, obviously, feels off. As for the black levels, the Dynamic Black feature is turned on by default across all picture modes and it looks really good. However, turn it off and the images become very washed out.

With HDR10 support, the UHD65 sure is offering more value in its segment. And it’s not just the HDR reproduction feature that the UHD65 sports but also that of its ability to convert SDR to HDR with different picture modes. The HDR SIM in its default mode i.e. Standard mode seems more appealing than the bright mode which completely ups the saturation levels. Film and detail can certainly be appropriate for movies and shows with particular colour treatments but for most of our samples, they felt unnatural.

Because this is a DLP chip that doesn’t have native 4K capabilities, if you run static images of extremely fine lines vertical or horizontal, you will see blurry edges which don’t present themselves so clearly in native 4K projectors. These nuances only come out in test images and don’t show up in a discernible fashion in your day to day use cases. 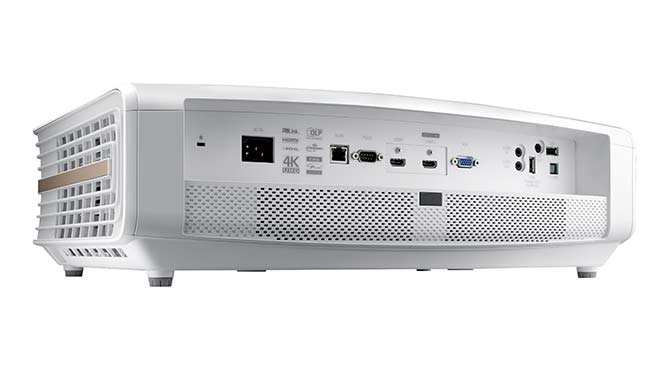 Projectors were never known for having excellent audio, and it’s not just projectors. Hardly are there any high-end display devices with awesome audio and the UHD65 is no different. The built in speaker setup consists of two 4W speakers which fall short ridiculously in all aspects. Thankfully, Optoma has both analog and digital audio output.

We are told that Optoma doesn’t sell on Amazon. However, you can find the Optoma UHD65 on Amazon for Rs.2,41,383 while channel retail can go as high as Rs.4,25,000. Amazon does not list warranty details for the Optoma UHD65 though these things generally ship with a 3-year coverage. Just talk to the online retailer about warranty coverage before you make your decision because 4,25,000 is honestly way to much for the UHD65.

The Optoma UHD65 is leading the charge for budget 4K HDR projectors. It sports a clean and classy design, and runs quite silent. One place where it falls short is the brightness of the lamp which could certainly have been in the 3,000 lumens range for the retail channel price that Optoma is quoting for the device. The picture quality is pretty good otherwise with near equal REC 709 reproduction. If you're getting the unit online, then the price is certainly justified, otherwise, it's a bit too much.