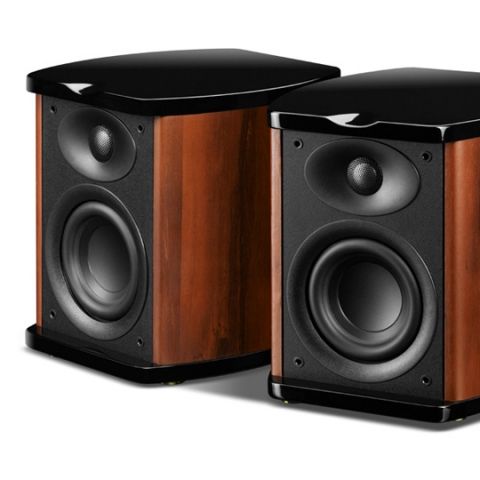 The Swans HiVi M100MKII is an excellent option (much like the A2) if you are in the market for high-fidelity desktop speakers. The kind of precision they offer is not usually encountered. If you are too accustomed to the subwoofer lows, for that little bit of missing rumble perhaps Swan’s own M50W or M20W (2.1 config) would be a worthy unit to check out. We’ll be calling for those SKUs soon, so stay tuned.

Nearfield studio monitors don’t come by our test center very often, so when on those rare occasions they do, there is a fair bit of excitement in the air. The last ones I can remember were the Audioengine A2 and before that the Genelec 8010A years ago. Following these two very celebrated reference grade speakers, the Swan M100MKII doesn’t disappoint. I won’t waste too much time describing how they look because you’d be able to tell from the picture already that they mean business. They’re heavy and the heft gives them a sturdy feel.

With bookshelf speakers positioning is really very important to establish a good listening cone. Playing around a little with placement I was able to get that perfect false mono directly in front. The other factor of importance is the source. Hooked up to our trusty Asus Xonar Essence STX, playing only uncompressed samples, the speakers were able to belt out some crystal clear audio that made people sit up and take note.

Unlike traditional reference monitors the Swans HiVi M100MKII comes with bluetooth connectivity. To purists that might seem like a travesty, what with the reduced data rate of the protocol and all, but guess what; while there was a difference in quality it wasn’t unbearable. I played the same flacs from the Essense STX and via bluetooth from a Nexus 5. The drop in detail was subtle, for instance the cymbals were more vibrant via the STX but overall it felt like the changes were on account of a DSP that got applied. Net take away is that if on those one off occasions, your non-audiophile friends pair their phones, the speakers will reproduce better audio than they would normally be accustomed to.

How do they perform otherwise?

The clarity is quite impressive and I was especially impressed with the dynamic range. The speaker set performed particularly well on pinch harmonics with some of our guitar driven test tracks. For bass heavy tracks I have a mixed opinion. The crunchy bass line on Strip The Soul (Porcupine Tree) sounded phenomenal – every note strong and noticeably accurate. With the M100MKII you'll be able to tell one distinct bass note from another unlike that overall voluminous hum that passes off for good bass these days. Having said that, I found the lows on Angel (Massive Attack) didn’t feel that deep. Of course it’s wrong to expect drivers this size to produce the “rumble” a dedicated sub can. In effect, it’s not a brickbat against the M100MKII but just a defining trait of the bookshelf speaker category. The midrange was accurately represented as well - this was particularly noticeable on Dream Theater tracks where the instrument density is fairly high.

Lastly for a speaker system that has bluetooth as a connectivity option, I was surprised that there were no RCA inputs, instead you have one solitary 3.5 mm line in.

Time for the verdict:

The Swans HiVi M100MKII is an excellent option (much like the A2) if you are in the market for high fidelity desktop speakers. The kind of precision they offer is not usually encountered. If you are too accustomed to the subwoofer lows, for that little bit of missing rumble perhaps Swan’s own M50W or M20W (2.1 config) would be a worthy unit to check out. We’ll be calling for those SKUs soon, so stay tuned.