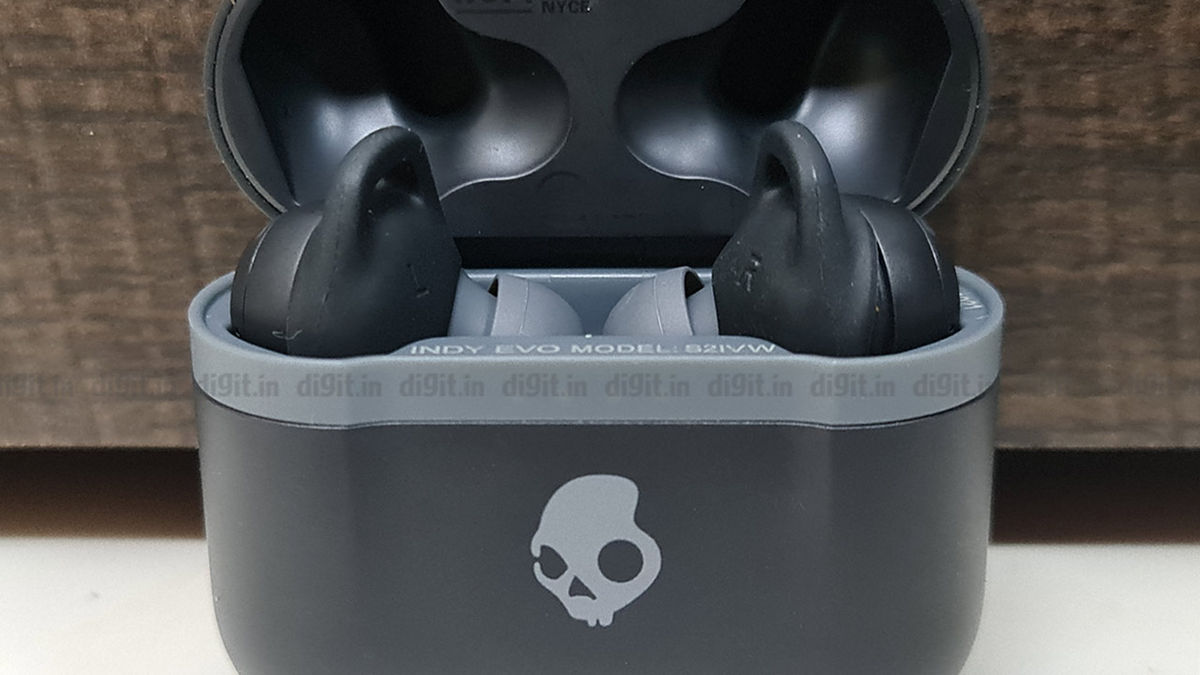 Priced at Rs 5,999, the Skullcandy Indy Evo is part of the highly competitive mid-range price segment in the true wireless earphones category. So should you buy these earphones? If you’re buying these earphones with the primary purpose of listening to your prized audio collection, then you’d be better off going with the Creative Outlier Air which just costs 1K more. However, if you’re looking for a feature-rich pair of earphones, with good battery life and solid build quality and fit, then these earphones may just be a good choice for you.

The successors to American audio company, Skullcandy’s, original Indy true wireless earbuds which released in 2019, the Skullcandy Indy Evo come with improved battery life, Ambient Sound, IP55 rating, and some other improvements. Priced at Rs 5,999, the earphones enter the competitive mid-range, under 10K price segment with options such as the Creative Outlier Air, JBL Tune 125TWS and even the Sony WF-XB700. However, the Skullcandy Indy Evo does sport a cheaper price tag than the three other options we mentioned. On paper, these earphones are possibly also the most appealing since they come packing a sizable number of high-end features. Let’s find out if the Skullcandy Indy Evo is worth picking up at this price range or if you should divert your attention elsewhere.

Loosely following the design language of its predecessor, the Skullcandy Indy Evo also features the stem or pipe-style design with in-canal buds that sit in the ear securely with the help of silicone tips and stability ear gels. The company has provided three different sizes of silicone tips (S, M and L) and two sizes of stability gel wings (S and L). 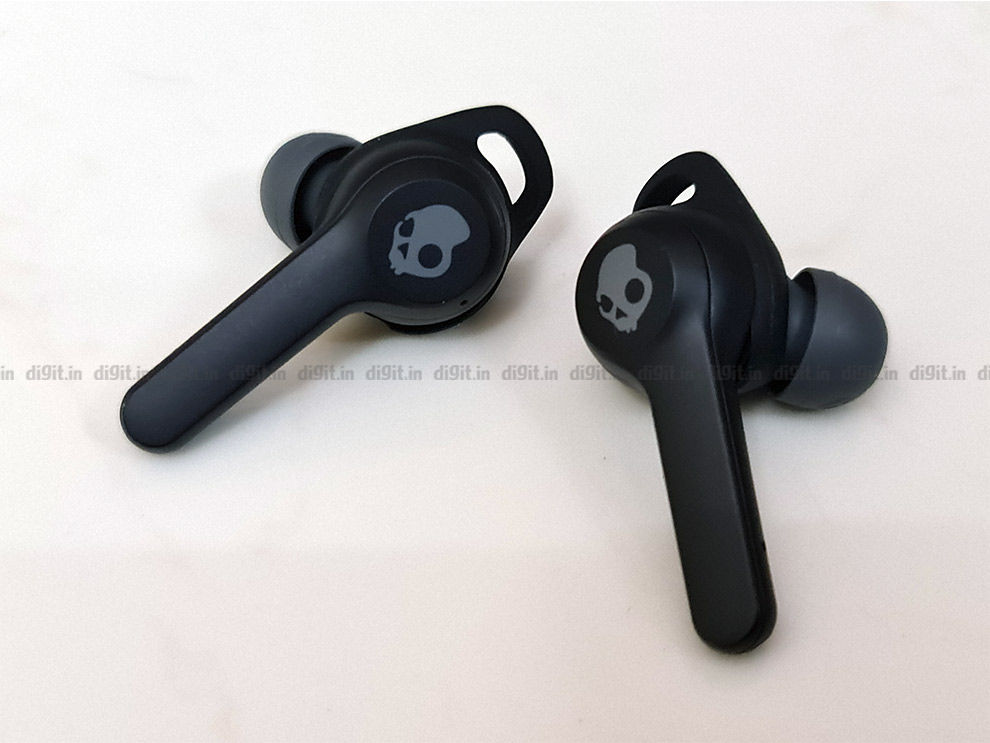 Despite being made primarily out of plastic, the earphones look and feel well built and there’s a certain flair to them too, with the characteristic Skullcandy design language, however, it’s not over the top. The rear housings of each earbud sports the Skullcandy logo, and this surface also doubles as a capacitive touch panel that can be used to control music playback, calls and activate certain modes. We’ll cover the touch panels’ functions in-depth in the next section. 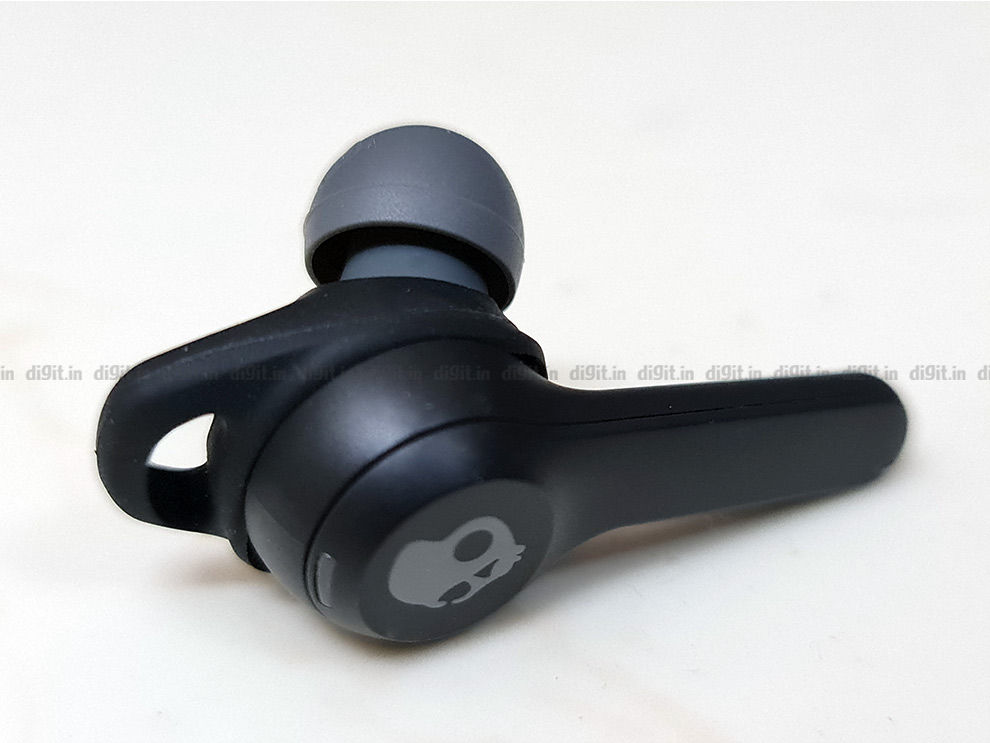 The fit, in our tests, proved to be extremely secure and snug owing to the wide variety of silicone tips and gels provided as well as the ergonomic shape of the buds. The buds are also pretty lightweight, so they don’t cause any overbearing discomfort even after hours of listening. The buds can easily be used for intense activities such as gymming and running due to their snug fit, and also since they are rated IP55, which means sweat or splashes won’t damage the buds. The snug fit also led to rather decent passive isolation. 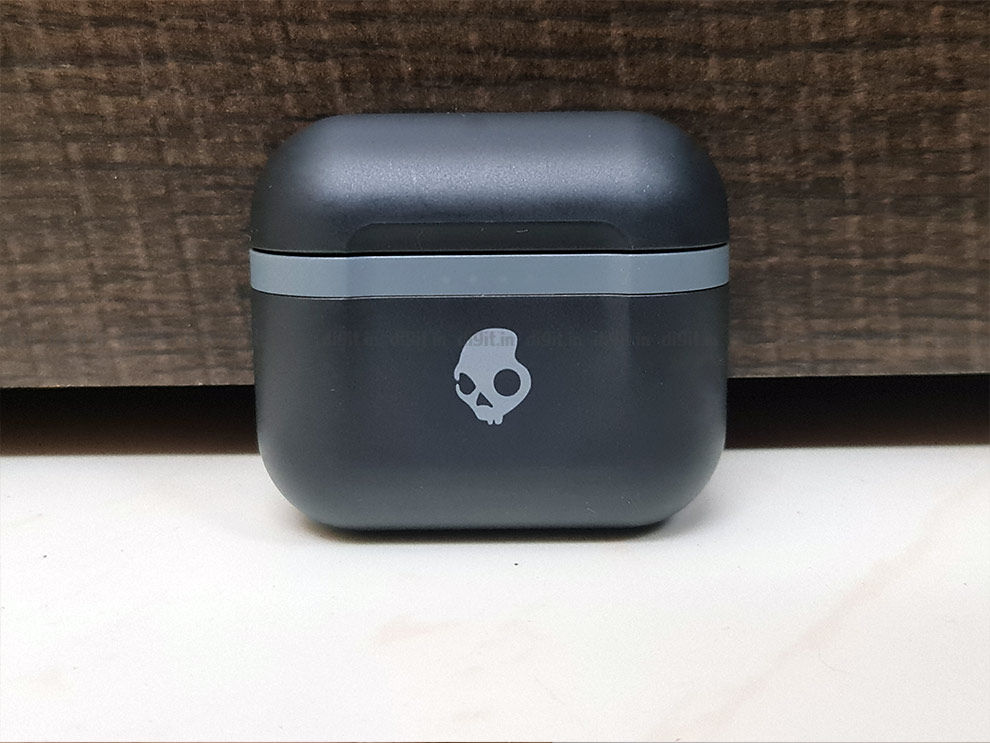 The charging case has a similar design language as the buds, with a dark grey and light grey dual-tone and matte finish. While it certainly isn’t one of the most pocketable cases we’ve seen, it does lay flat and shouldn’t bulge out too much from pockets. At the front of the case, there are four LED lights that indicate the battery levels of the case, and at the bottom, there’s the USB Type-C charging port. The one complaint we had with the case was that the lid wouldn’t close securely if the buds have the stability gels on them. However, the magnets hold the buds in pretty securely, on the whole. 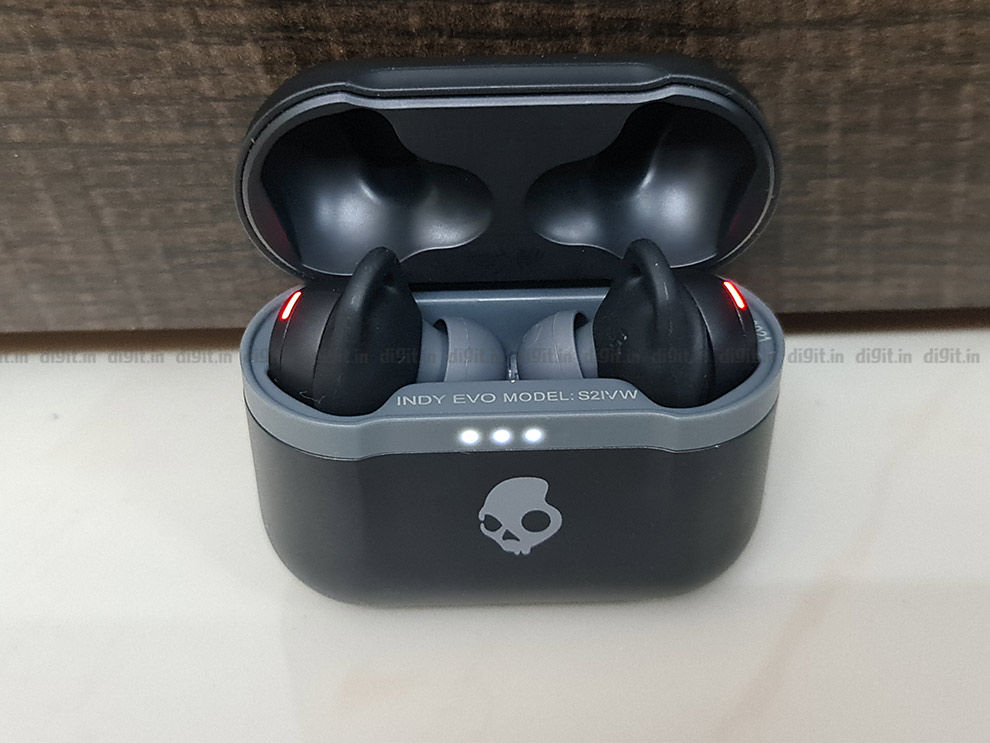 Overall, the Skullcandy Indy Evo has pretty good build quality and impressive yet subtle design. The buds are available in various colour options including True Black, Chill Grey, Pure Mint, Deep Red, and Blue. We got the True Black variant for the review, so do note that while the design and looks are understated on our review unit, the other colours such as Blue, Pure Mint, and Deep Red look quite vibrant.

Packed with features such as Ambient Listening mode, touch controls, three EQ presets (Music, Podcast, and Movie), voice assistant support, and others, the Skullcandy Indy Evo can easily catch the eye of potential buyers due to the slew of features offered. The most interesting is the ability to switch between three different EQ presets. Movie mode featured punchy lows and added to the dynamic impact of action scenes, Podcast mode stripped back the lows and highs and brought the mids to prominence, while Music mode provided a mediocre listening experience with a dark sound profile. 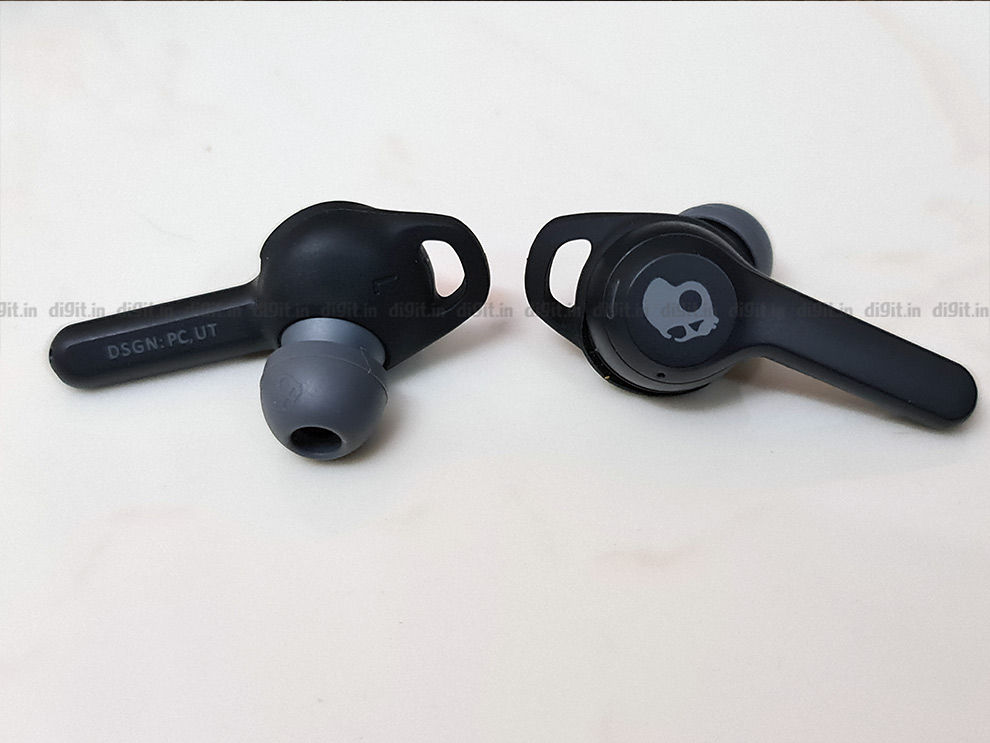 The way to toggle between these modes is by utilising the touch controls - two short taps plus one tap and hold (long tap) on either earbud cycles between these presets. Now, if you want to cycle between Ambient Sound on and off, the control to do that is one short tap plus one tap and hold on either earbud. The other controls are as follows - double-tap either bud to pause/play or answer/end calls, tap and hold the right earbud to skip a track, tap and hold the left bud to go to the previous track, tap left to decrease volume and tap right to increase volume, and finally tap either bud three times to activate your device’s voice assistant. Phew, that was a mouthful. Needless to say, the sheer number of controls can be quite confusing and proves to be difficult to remember. We often found ourselves checking the manual to reconfirm how to perform certain functions. However, the touch controls are responsive and worked pretty much perfect for us for the majority of the testing period.

The earphones are compatible with a rather basic accompanying app, however, the app is pretty barebones. It only provides you with a tutorial for the touch gestures, allows you to toggle ambient listening mode, and check what EQ preset is currently active. We didn’t use the app much since there’s nothing of substance on the app that can’t be achieved through the earbuds themselves. 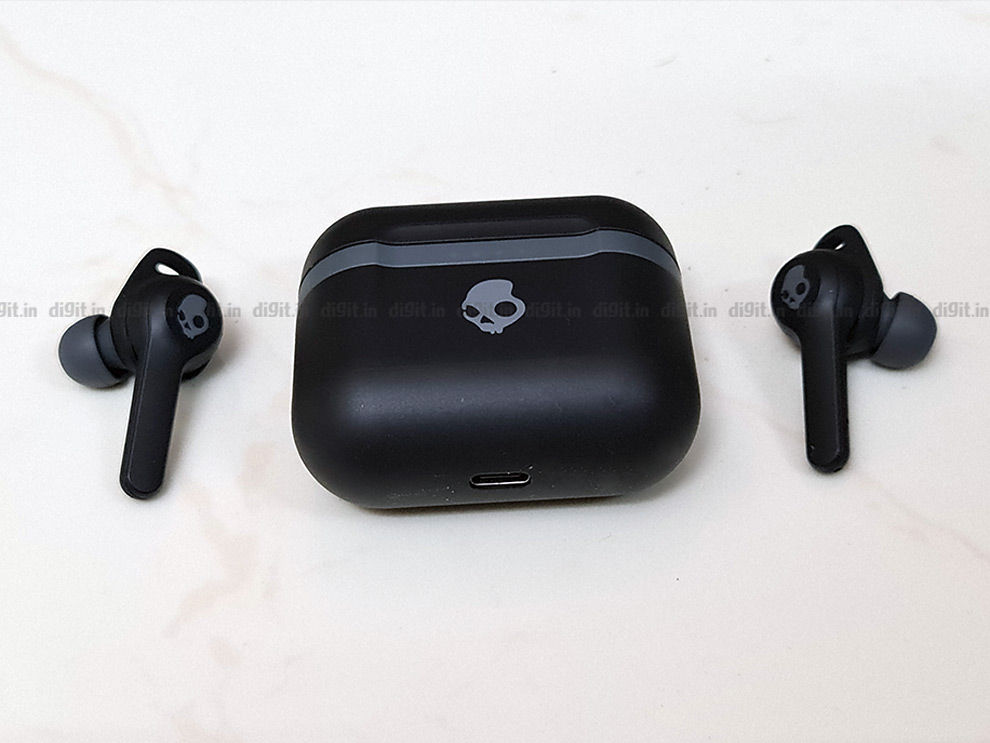 The Skullcandy Indy Evo, much like other Skullcandy audio products, comes packing Tile tracking which allows you to find the location of each earbud through the Tile app. You can also cue a loud beeping to emit from the earbuds to help you find one if you misplaced it. Additionally, the earphones are powered by Bluetooth v5.0 and come with a wireless range of about 10m or 33 feet. The connection was stable throughout our test process, and there were no lags and skips in the audio. The earphones, unfortunately, only come with support for the standard SBC codec. The company did mention that they do come with AAC support too, but we couldn’t get our Samsung Galaxy S20 Ultra to shift to AAC codec, despite being able to do the same with other earphones that support AAC.

Additional features on the Skullcandy Indy Evo include IP55 dust and water-resistant rating, USB Type-C charging, Mode mode (both buds act as masters allowing you to use either individually), and a sizable battery life rated at 30 hours by the company (6 hours on the buds, and 24 hours via the charging case). In our tests, at about 50 per cent volume, we were able to squeeze out about 5 hours of juice from the buds themselves, while the charging case easily topped them off another 4 times, which some battery left to spare. You also get Fast Charging support, with a 10-minute charge of the earbuds providing 2 hours of listening.

Using the default ‘Music’ EQ preset, we found that the Skullcandy Indy Evo sports a rather dark sound profile. A dark sound profile is one where the bass and lows are the loudest in decibel levels and the following frequency ranges keep dropping in loudness levels, leading to a ‘dark’ sound that is not as pleasing as ‘warm’. We tested the audio performance largely in the default Music preset. During our tests, however, we found the Movie mode to be more bass-heavy than the Music one, so if you enjoy a punchier bass response, simply switch to Movie mode.

In the default Music EQ preset, the bass response is controlled yet exhibits some punch, all without overwhelming the vocals and instruments in the mids. However, fans of EDM, rap, hip-hop and Bollywood may want more thump from the bass. The bass response on these earphones don’t follow the route many Skullcandy earphones and headphones are known to take, which is cramping in as much bass response as possible even though it may sacrifice the overall details. We liked that Skullcandy chose to keep the bass response tight and accurate. Tracks such as bad guy by Billie Eilish had controlled bass with a good punch, and the vocals were still clear and easily discernible. 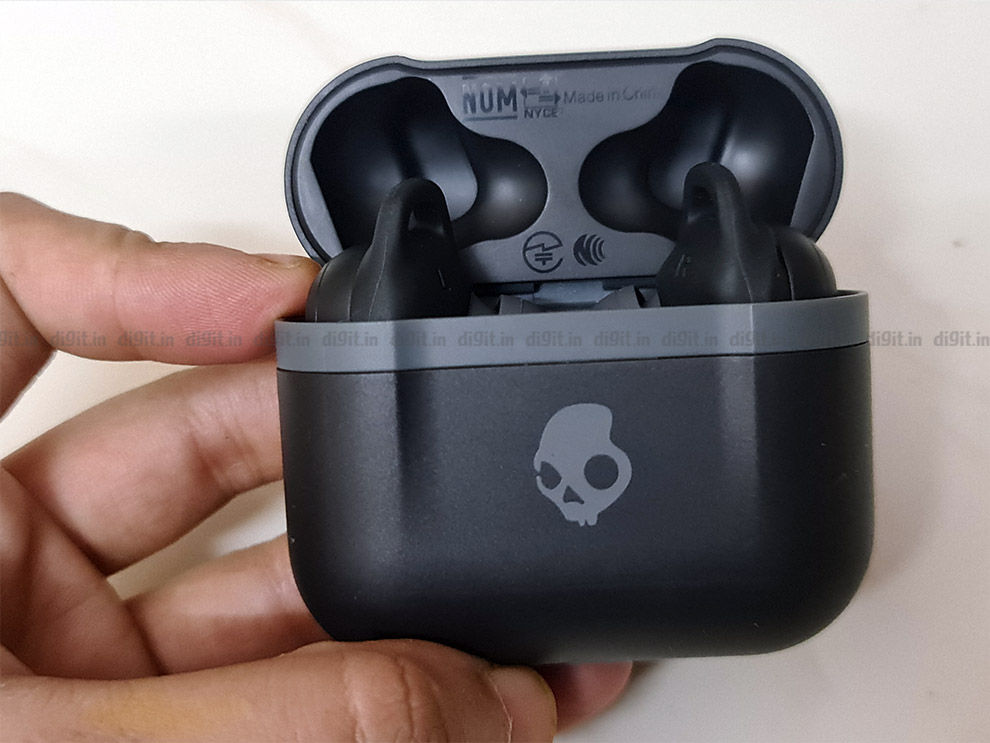 That being said, the mids, especially the mid-mids and high-mids, are slightly recessed on these earphones (through no fault of the bass response), and due to that, some tracks can lack drive and energy. In Pull Me Under by Dream Theatre, the lead guitar is noticeably dull-sounding and there’s a lack of detail in the reproduction of the instruments. The highs are slightly worse and instruments such as cymbals, hi-hats and shakers fall to the back of the mix and lack detail. Therefore, these earphones aren’t as easy to recommend for those who listen to rock and classical music.

Stereo imaging, on the other hand, is pretty good on these earphones and they do a good job at accurately positioning instruments and voices. The soundstage, as expected with in-ears, is limited. Coming to the microphone quality, the integrated microphone was satisfactory, however, the listener on calls sometimes complained that our voice sounded somewhat muffled.

Priced at Rs 5,999, the Skullcandy Indy Evo is part of the highly competitive mid-range price segment in the true wireless earphones category. So should you buy these earphones? If you’re buying these earphones with the primary purpose of listening to your prized audio collection, then you’d be better off going with the Creative Outlier Air which just costs 1K more. However, if you’re looking for a feature-rich pair of earphones, with good battery life and solid build quality and fit, then these earphones may just be a good choice for you. While the Skullcandy Indy Evo are definitely feature-rich and well-built, they fail to stand out in the congested mid-range true wireless segment due to mediocre sound.