The GoFlex TV is priced at around Rs. 6,900 which we felt was a brilliant price point for a feature rich HD media player. It is ideal for movie enthusiasts who have a drive full of movies across file formats, and intend watching it on big screens. The internet streaming options will leave net junkies happy.

The GoFlex TV comes in a compact black plastic box having a matte finish throughout, with the Seagate logo embossed on the top. The front portion of the media player has an indicator on the top right hand corner and an IR receiver on the top left hand corner. The front panel opens to reveal a compartment wherein you can insert a Seagate GoFlex portable hard drive. This is reminiscent of the FreeAgent Theatre HD media player which had a slot for a Seagate drive. The slots are made in such a way that only Seagate drives can be accommodated in them. Moreover in the case of GoFlex drives, the interface is a proprietary one so there is no scope of inserting any other drive in the slot. 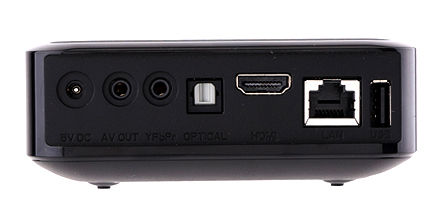 The ports visible on the rear side of the GoFlex TV

The box has a USB slot on the right hand side whereas on the rear side you have the usual suspects i.e., a USB drive, and HDMI port, a digital audio out, the power connector, component out, AV out and a LAN port. There are two air vents on the sides so as to prevent the media player from overheating.

HDMI cable is not bundled in the box which I found quite surprising. A customer paying good money purchasing this media player should get all the connectors available. Also, no portable GoFlex drive is bundled in.

We tested quite a lot of HD media players last month for the magazine and apart from the Buffalo Link Director I don’t think I came across any user interface worth writing home about. Is it too much to expect a good graphical user interface from a media player that can play anything you throw at it? Agreed simplicity is important, but having a clean inviting interface is not rocket science.

[RELATED_ARTICLE]Coming to GoFlex TV, the user interface does leave you impressed. It has a three nice rows of menus which makes navigation a breeze. The top most segment comprises the regular Movies, Music, Pictures, Internet and Browse menus arranged horizontally with each menu represented by an icon, as is the norm in majority of the media players. Below this segment we have an internet widgets section comprising YouTube, Flickr, Video Feeds, MediaFly, vTuner etc., which can be accessed once the device is connected to the internet via the LAN cable. The third and final segment comprises all the various connectors to the GoFlex TV with connected devices highlighted.

GoFlex TV segregates media according to its type. It will take some time during the first scan but on subsequent searching is quite fast. Another nice touch that has been added to the interface is a Menu bar, which is activated on pressing the Menu button on the remote control. This bar drops down from the top and allows you to ease up navigational time when in a particular menu. For instance if you are in the Music menu, then you can search for a particular song, or arrange the music according to genre, year or even compose a playlist.

Read on to know more about the GoFlex TV, including its internet browsing ability, supported formats, and performance...

It has around 9 widgets, most of them having video feeds from various websites (YouTube for instance), and photo feeds from sites like Picassa and Flickr. There is also a radio station widget called Vtuner. Another interesting aspect is the text feeds from news websites like BBC and CNN.

All the widgets are preset and there is no means to add more widgets or edit the text feeds. Giving the consumer some flexibility in that aspect would have made this product really desirable. Absence of customisation in the Video Feeds > World News for example is disappointing as most of the feeds comprise Chinese or Japanese news sites. An option to set that to Indian news channels would have made more sense.

But then again if we look at the bigger picture, the GoFlex TV is supposed to primarily be a media player, so video feeds apart from YouTube should really be considered as a bonus so to speak.

The Business and Technology feeds present in the Video Feeds widget

[RELATED_ARTICLE]Having said this, the Video Feeds widget can get very addictive as it has neatly segregated sections in the form of World News, US News, Business and Technology, Entertainment and Sports. You can stay hooked for hours browsing content on sites like Tekzilla, Onion News Network, ESPN, TED Talks, How Stuff Works etc.

We hooked up the GoFlex TV with our HDTV via an HDMI cable. It does not disappoint on the formats front as it plays pretty much anything you throw at it. Apart from the regular AVI, MKV, MOV files it also played FLV files without any hitch, although obviously the quality is not worth talking about. It can play full HD videos without any glitch. Also the scaling up from a standard resolution file was good but pixellation persists. For an HD media player it can play a variety of audio formats, right from the MP3 to AAC to FLAC and also supports AC3 and DTS audio.

Read on to know more about the GoFlex TV, including its performance and specifications, as well as our verdict...

The media player takes quite a while to start up. It took around 24 seconds to get to the main home page after we switched on the GoFlex TV. Thankfully loading a movie does not take as much time, and is quite speedy.

[RELATED_ARTICLE]The video quality was brilliant. There was no skipping of any of the videos that we tested. Only when it comes to the Internet videos, the speed can really enhance or completely ruin your video viewing experience. We did not face any problem with YouTube, but some high quality videos like Tekzilla and NYT did skip. Buffering does not work with all the video feeds. One good aspect about the player is that you can play music in the background and browse through photographs in the Pictures menu or on Flickr or Picassa (seen in the photo gallery below) or read the news on the News Feed application. The music menu has a nice touch to the interface in the sense that it displays the album art while playing the song.

Using the virtual non - QWERTY keyboard on the screen is a big pain in the thumb, literally. One other thing which we felt could have been included was an option to move around files between portable drives or the option to copy files from the internet on the hard drive.

The GoFlex TV is priced at around Rs. 6,900 which we felt was a brilliant price point for a feature rich HD media player. It is ideal for movie enthusiasts who have a drive full of movies across file formats, and intend watching it on big screens. Also the internet streaming options will leave net junkies happy.

At an additional Rs. 3,000 you can buy a WiFi adapter, thus making GoFlex TV a WiFi compliant media player.