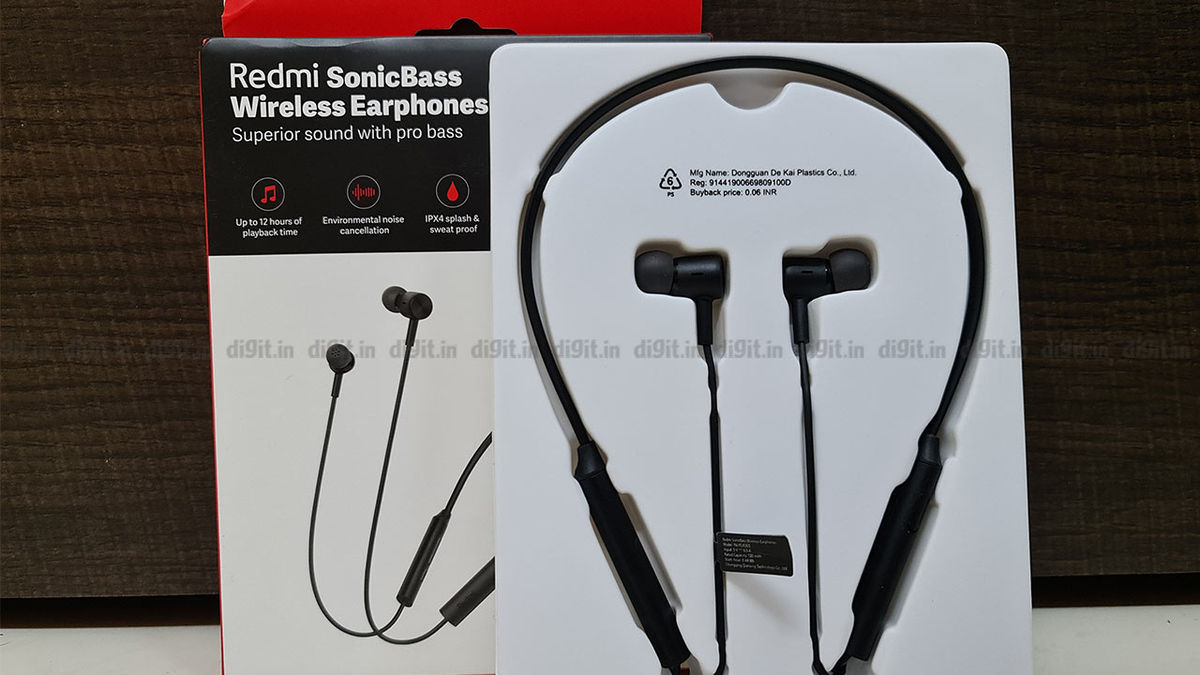 At the sub-2K price point, the Redmi SonicBass Wireless Earphones are a surprisingly decent purchase. The sound quality is commendable, even though we’d prefer some more heft in the mids, the earphones don’t push the bass excessively as seen on some budget competitors. Additionally, you also get a decent 12 hours of battery life, an IPX4 rating, and voice assistant support. Overall, we wouldn’t hesitate to recommend these earphones to those looking for a decent pair of earphones under Rs 2,000. However, if you’re a basshead, the slightly restrained bass response might deter you from buying these earphones.

Affordable wireless earphones from the likes of companies such as Redmi, Realme, Wings, OnePlus, Oppo and others have become increasingly popular amidst the largely price-conscious Indian market. While these earphones certainly do not contend against high-end wireless earphones from companies such as Sony, Jabra, Bose, and others, they are increasingly providing a compelling number of features and sometimes, even good sound quality at this lucrative price point. Priced at merely Rs 999, Redmi has now launched the Redmi SonicBass Wireless Earphones, a pair of neckband style wireless earphones. Let’s see how these earphones fared in our review.

Primarily sporting a plastic build, the Redmi SonicBass Wireless Earphones come in a flexible neckband-style design with a matte black finish. The earphones are available in only one colour - black, and there are no differently coloured accents on the earphones, so they tend to look slightly bland. 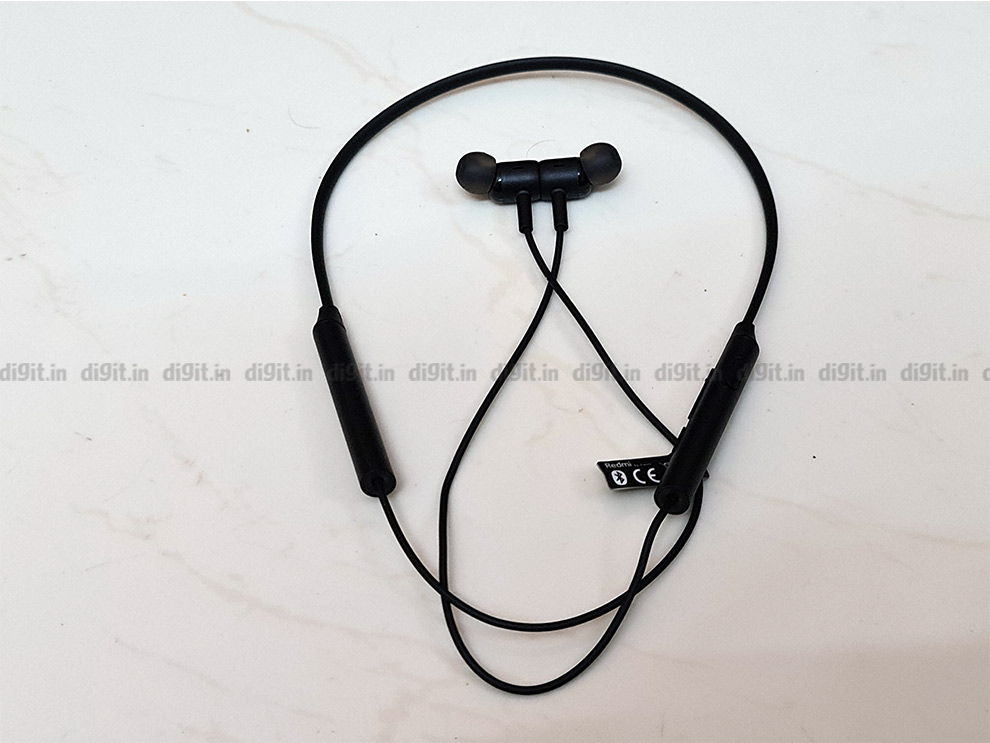 The surface of the neckband that rests on the back of the neck is rounded while the other side is flat. This curve allows it to rest more naturally on the neck. The materials used feel decent to the touch, and don’t have the abhorrently plasticky feel that some budget earphones sport. 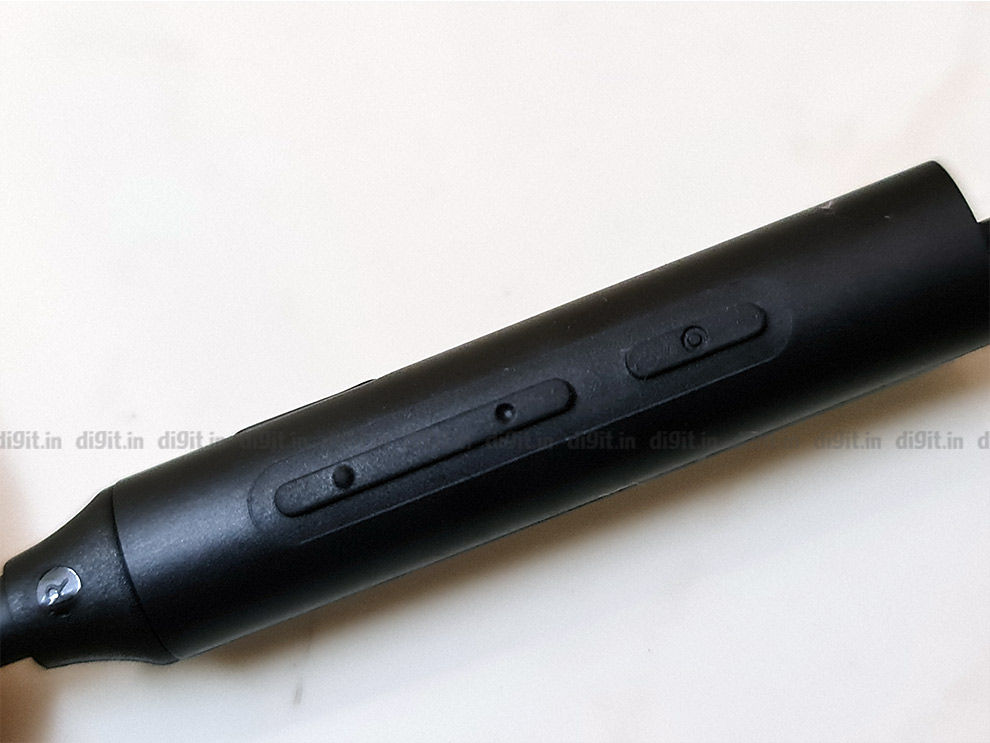 The plastic end (or modules) on both sides are lightweight and the right one houses all the buttons and ports. This includes a multifunction button, volume up and down buttons, and a micro-USB charging port. The buttons are easy to find but the volume up and down buttons aren’t as tactile or ‘clicky’ as we’d hope. The micro-USB charging port is tucked under a plastic flap. It is slightly disappointing that Redmi has chosen to go the micro-USB route even in 2020, however, at Rs 999, it may be acceptable. Also, Redmi hasn’t provided a micro-USB charger within the box. 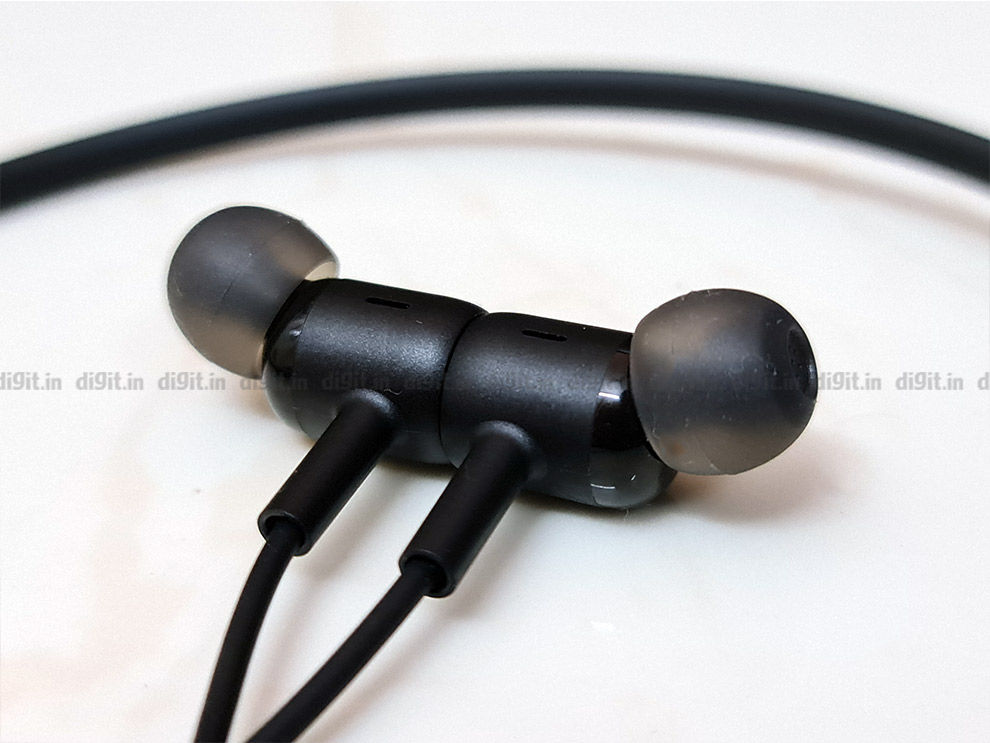 The earbuds sport a dual matte and glossy texture, with the back housings of the buds featuring a CD-like design. These housings are magnetic and can be attached to one another when lying idle. There’s no function that powers off the device via the magnetic connection like on the OnePlus Bullets Wireless Z and the Realme Buds Air, however, we were perfectly content with the normal power on/off button on the Redmi SonicBass. 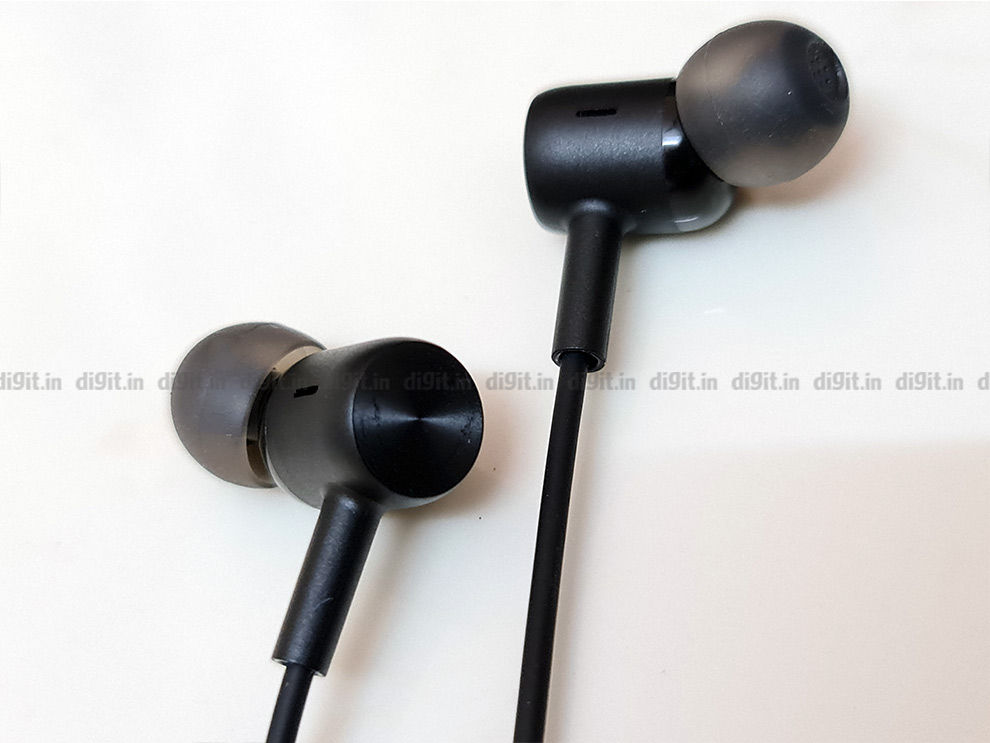 Something we weren’t content with was the fit of the earphones. Despite being extremely lightweight, the earbuds didn’t feel extremely secure within the ear. We tried all the sizes of silicone tips (3 sizes) provided in the box, but we still couldn’t get that perfectly snug fit. The buds seemed slightly unstable in the ear, especially during intense activities such as jogging. Depending on whether you find the perfect fit, you may feel the need to readjust them within your ears every now and then. Nevertheless, while the fit may be slightly inadequate, the earbuds are lightweight which makes them pretty comfortable to wear over extended periods.

The Redmi SonicBass aren’t exactly feature-laden, however, they do come with some fairly basic features. Powered by Bluetooth v5.0 connectivity, the earphones have the standard range of about 30 feet (unobstructed). Also, there weren’t any lags and skips in the audio and the connection was pretty much solid throughout our testing period.

The earphones also come with voice assistant support. Double-tapping the multifunction button on the right plastic module activates your device’s voice assistant (Google Assistant or Siri). The onboard controls also allow you to pause/play music, answer/decline calls, and skip tracks. The controls are fairly intuitive and worked almost flawlessly in our tests. 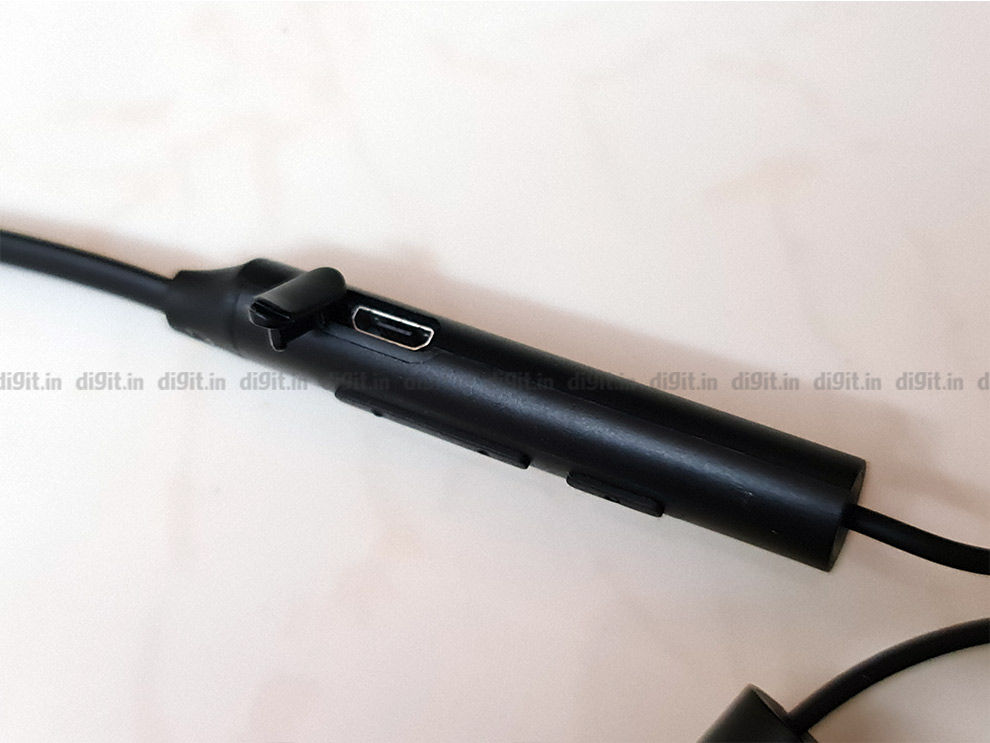 The buds also come equipped with an IPX4 splash and sweat proof rating, which means you can use them in the gym even if you sweat profusely. Light splashes in rains also shouldn’t damage these earphones.

You also get a pretty decent battery life rated at about 12 hours of playtime. This is the same as the battery life of one of the Redmi SonicBass’ biggest competitors - the Realme Buds Wireless. In our tests, at about 50-60 percent volume, we managed to squeeze out a respectable 11 hours of battery life.

Overall, the Redmi SonicBass provide some nifty but relatively basic features such as Bluetooth 5.0, voice assistant support, and an IPX4 rating. However, it misses out on USB Type-C charging, and AAC codec support (aptX is usually found on more expensive earphones).

The status quo with budgetary wireless earphones is usually where companies attempt to cramp in as much bass response as possible, sometimes even at the expense of other frequencies, which we don’t appreciate. While the Redmi SonicBass does have a full-bodied bass response, it doesn’t sound murky or muddy as on some other budget options in this price range. The bass response is tight and articulate in tracks such as Another One Bites the Dust by Queen without compromising the vocals. Unless you’re a complete basshead, you won’t be disappointed with the well-defined but slightly restrained bass response.

The mids, on the other hand, are slightly dull on these earphones. However, this is not due to auditory masking that is caused by excessive bass, but because the mids seem to be pulled back on these earphones. As a result, in tracks such as Pull Me Under by Dream Theatre, the lead instruments tend to sound a tad listless. The highs, on the other hand, are quite driven but the lows definitely are far more prominent. 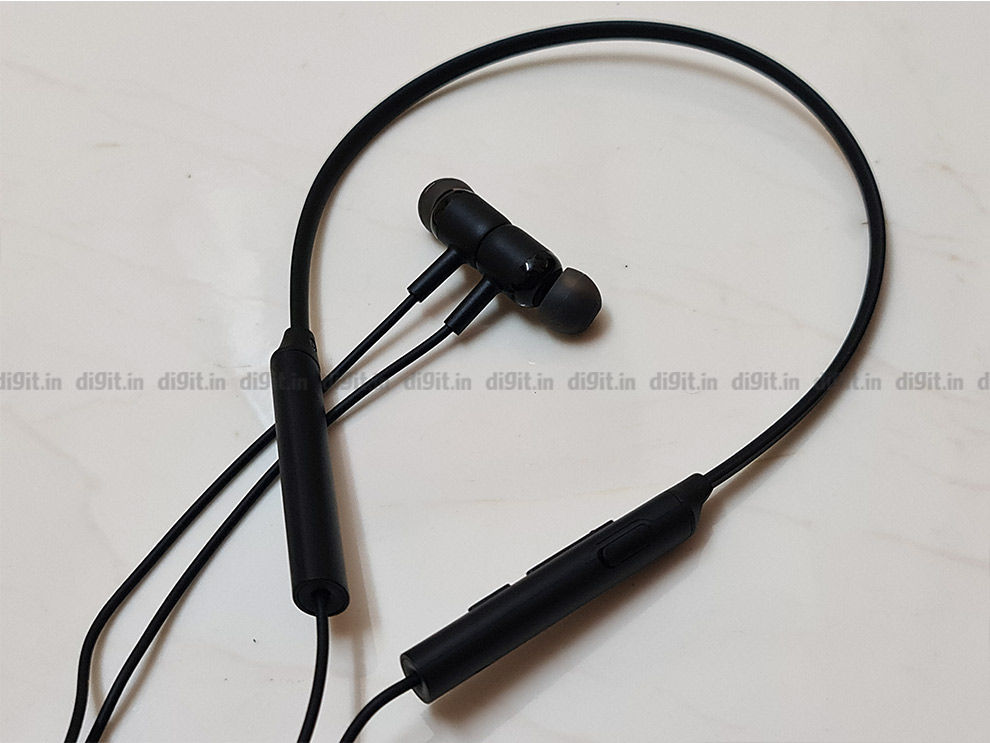 The microphone performance is subpar though, with the our voice sounding distorted to the listener on the other end during calls. Also, the earphones allow a lot of environmental noise in and relay it back in calls.

Priced competitively at Rs 999, the Redmi SonicBass Wireless Earphones are a surprisingly decent purchase. The sound quality is commendable, even though we’d prefer some more heft in the mids, the earphones don’t push the bass excessively as seen on some budget competitors. Additionally, you also get a decent 12 hours of battery life, an IPX4 rating, and voice assistant support. Overall, we wouldn’t hesitate to recommend these earphones to those looking for a decent pair of earphones for budget wireless earphones. However, if you’re a basshead, the slightly restrained bass response may deter you from buying these earphones.