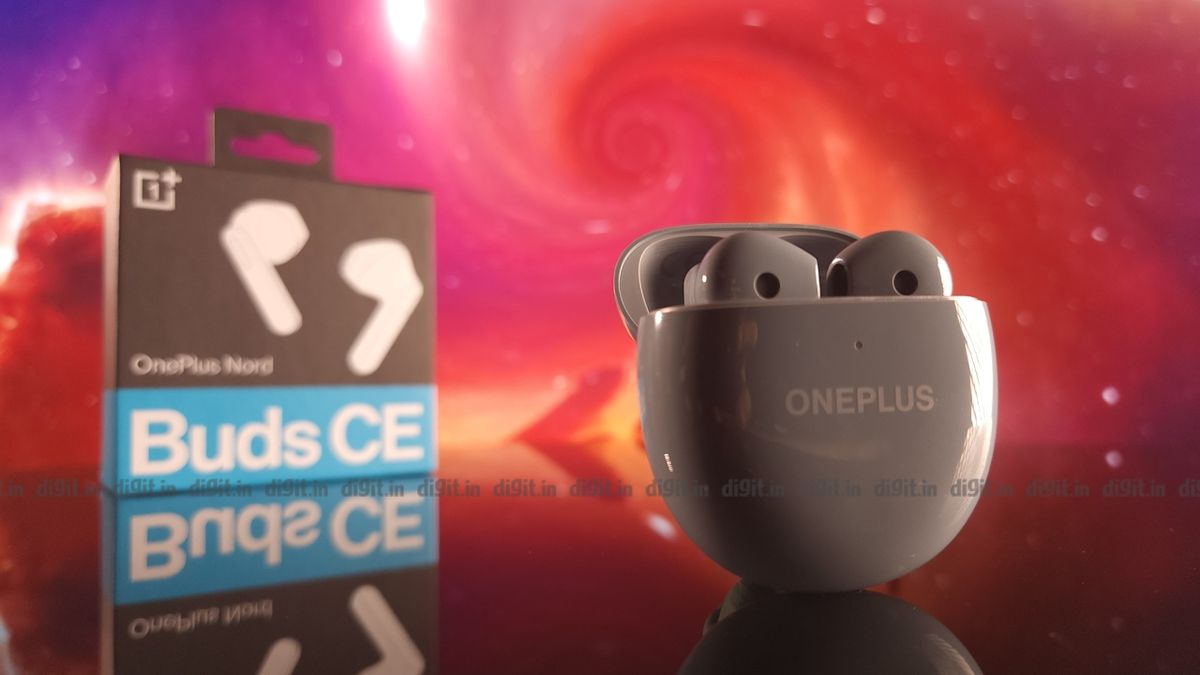 All things considered, the OnePlus Nord Buds CE is a decent buy if you are already a fan of the brand or are looking for a pair of earbuds that you can rely on for calls in the office or at home.

In the last few years, OnePlus has been very proactive in the Indian market when it comes to launching new products. Apart from selling their top-of-the-line products, they have also understood and catered to the need for budget devices for Indian audiences. A prime example of that is their Nord line of products. They are targeted towards the people who are out in the market, looking for strictly value-for-money products and want to get their hands on a OnePlus product without breaking the bank.

OnePlus Nord Buds CE are designed in a way which looks much higher than its price at a distance, but when you have a closer look, the flaws start to come to the surface. The oval-shaped charging case is made with glossy plastic and sports a subtle OnePlus branding on the front. Fresh out of the box, the case looks absolutely beautiful. However, even if you use it carefully, it tends to pick up scratches with time, dampening the looks quite a bit. 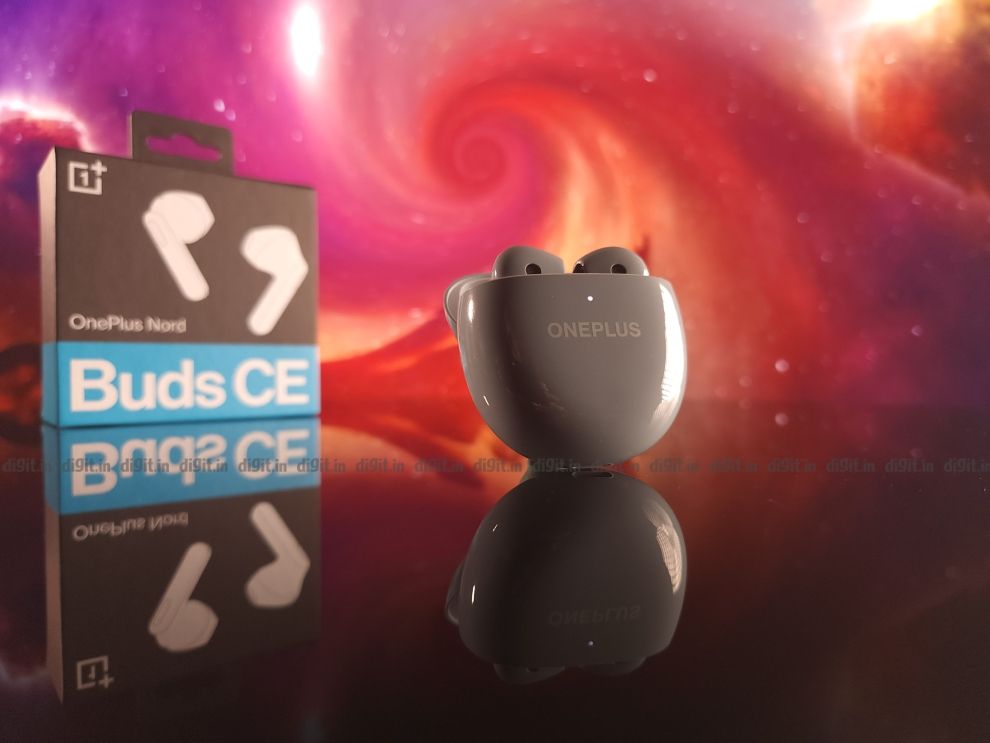 The earbuds come in two colours – Misty Grey and Moonlight White. Our Misty Grey review unit had some fans around the test centre. However, a few more colour options and a dual-tone design would have been great additions to the overall look of the earbuds. The hinge connecting the rest of the case to the lid, due to the lack of a string opening and closing mechanism, felt lose and quite flimsy. And, we did not have a great experience during day-to-day use.

When it comes to the buds, they also carry over the same colour scheme as the case. They have a long stem, which we are generally not big fans of. The buds slid in and out of the case with ease. They have what we call here the AirPods-esque design, meaning that the fit was polarising. While some found it to be perfect, others had complaints of pain within an hour and a half of usage, which is a really short time considering the modern usage times. So keep that in mind. We’d recommend trying the buds out for yourself before making a purchasing decision.

As for the controls, they are embedded at the top of the stem, with the touch-sensitive region having a matte finish compared to the rest of the buds. The sensitivity of the touch sensors is great, and the slightly different finish on the stem makes it easier to recognise the touch-sensitive areas. However, if you are someone who finds the fit sub-par and has to reach out to the buds to fix it through the day, then you could find yourself triggering the actions that are associated with that touch pattern. 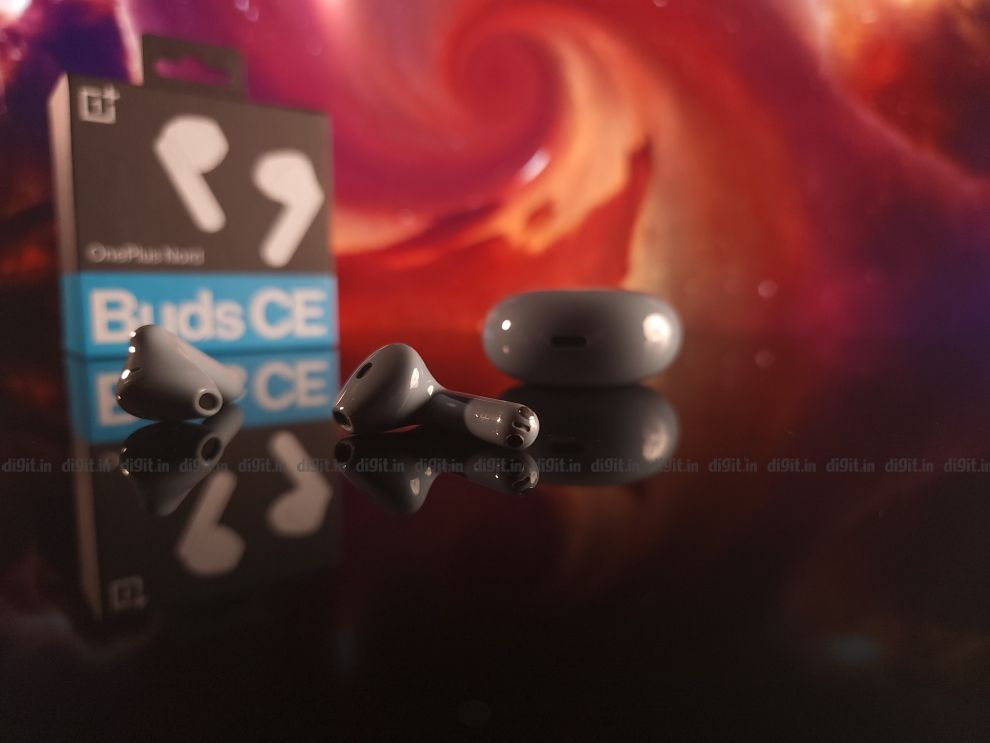 As a package, these look exactly what you pay for them. Not overly cheap, and not in the top brass either. The design and fit of the OnePlus Nord Buds CE are designed keeping a set target audience in mind, and we feel they would live up to the expectations of the people who are buying them for the most part.

While you may see many pairs of earbuds that are extremely popular in this price range, the OnePlus Nord Buds CE are inclined towards keeping things simple. Like their cousins, the OnePlus Nord Buds, which we reviewed earlier, these earbuds have a limited number of features which otherwise fill up the reading materials of other earbuds.

For EQ and other customisations, these rely on the HeyMelody app when connected to non-OnePlus devices and OnePlus’ offerings below OnePlus 6. For devices newer than the OnePlus 6, all the functions of the HeyMelody app can be found in the device settings itself. The documentation may not say so, but other devices on ColorOS 11.0+ can find the same settings as the newer OnePlus devices baked into the settings. The app works well as usual and covers all the bases for OnePlus users. 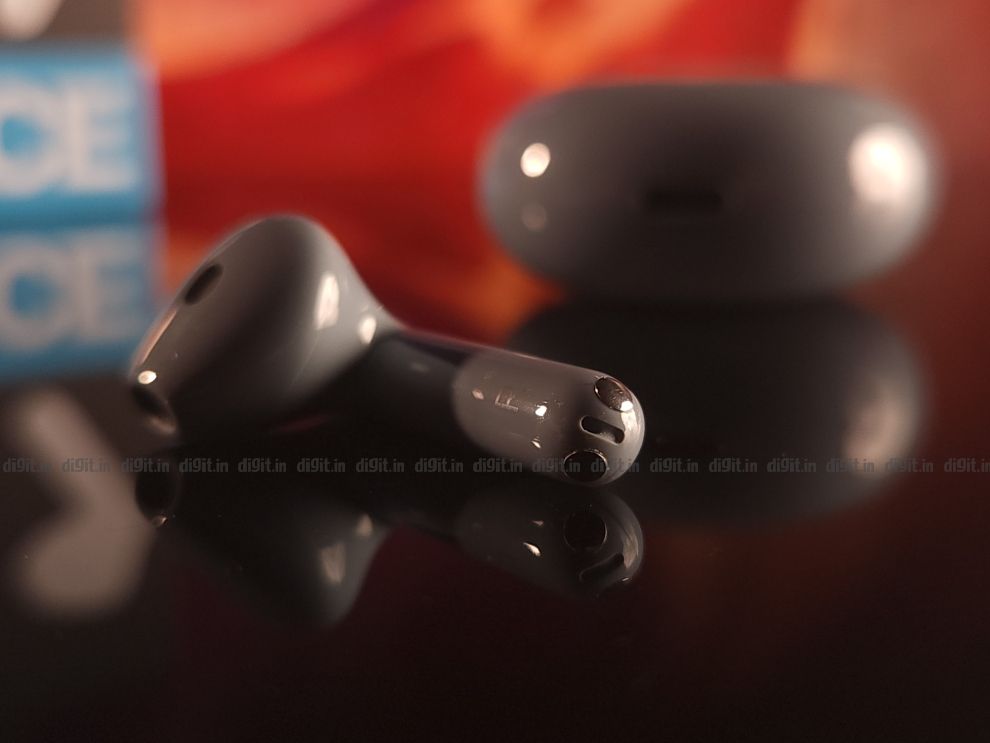 The earbuds come with a low latency Game Mode that can be triggered by a triple tap on the stem. As advertised by OnePlus, the Game Mode brings down the latency to 94ms. The Bluetooth 5.2 connectivity with OnePlus Fast Pair, ensures that there is a seamless and lag-free connection maintained between your device and the earbuds.

As we mentioned in our OnePlus Nord Buds review as well, the buds pack limited features. But whatever is baked in there is well optimised and taken care of during the development process to ensure that the user experience on this front is covered well.

When it comes to performance, there is nothing to write home about the OnePlus Nord Buds CE. As you can see for yourself in the graphs that we have below, the sound signature of the earbuds is bass-heavy. The mids are also underemphasised. To add to the misery is the fact that the design of the earbuds, due to the poor frequency response of the drivers, brings down the overall listening experience by quite a bit. 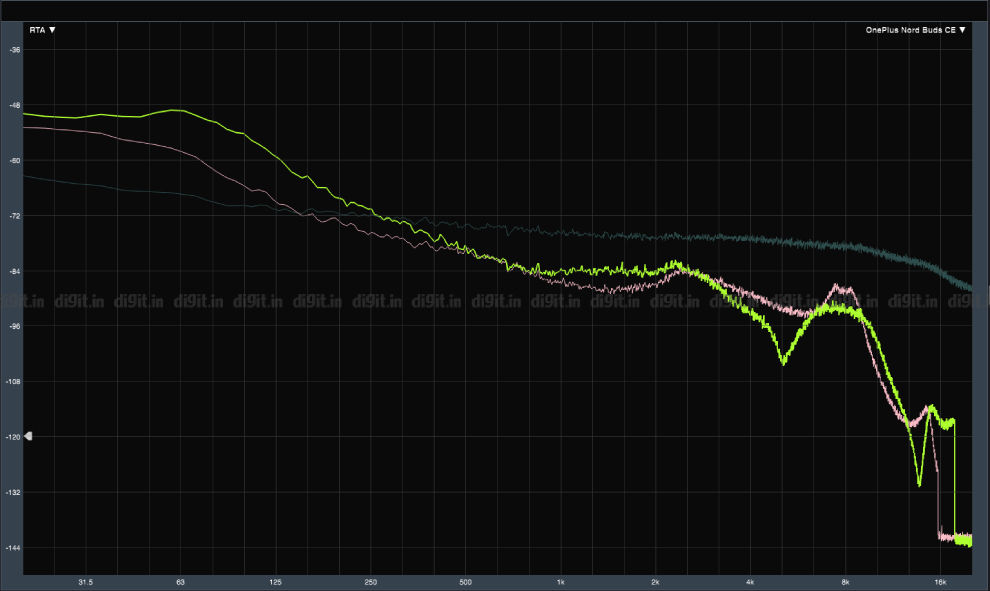 Comparatively, the Nord Buds, which retail for about ₹500 more, perform relatively much better. The bass is mellowed down, and the highs too are much better reproduced, giving a listening experience that is overall much better. However, at this price, a price difference of ₹500 can be a huge factor in swaying purchasing decisions. So, when strictly looking ₹100 on either side of the ₹2,299 price point of the OnePlus Nord Buds CE, then you can make these to be an enticing deal. Remember to test these out for the fit because the sound can vary a lot depending on the fit of these earbuds. 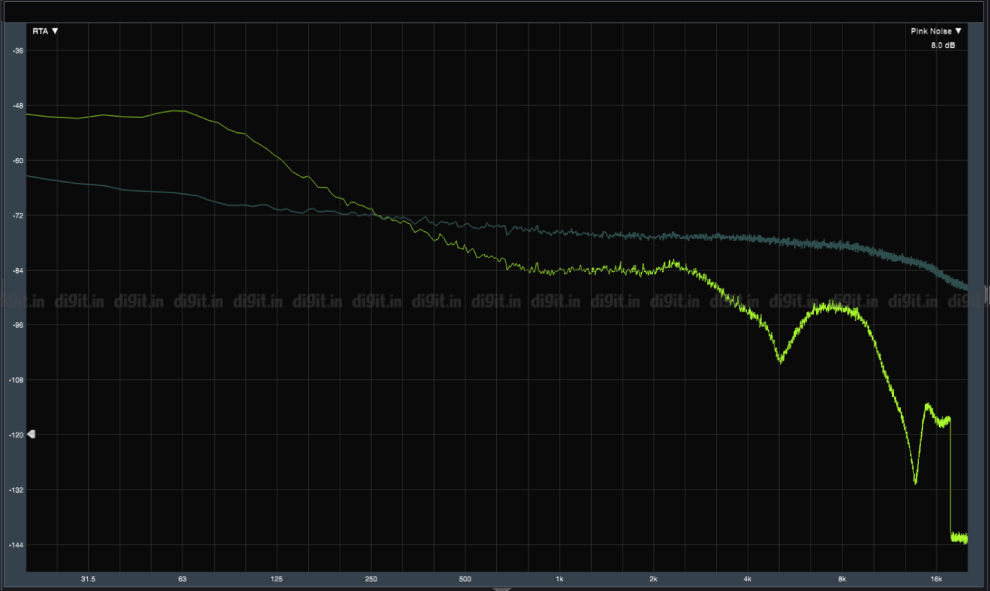 Also lacking in these earbuds is Active Noise Cancelling. It would be nice to have addition, but considering the price and the fact that the more expensive Nord Buds lack ANC, we did not set our expectations high. The surrounding noise, when listening to music above the 70 per cent volume mark, was toned down. But again, due to the design, it depends a lot on the user’s ear shape.

When it comes to microphones, during calls in indoor environments, the mics perform well. As soon as you have some background noise, these do not do a good job separating the audio, so your voice ends up being muffled. There are other earbuds in the market for a similar price which come with frills like artificial intelligence-based noise cancelling. But as we have found in our tests that the tech ends up being nothing but a spec-sheet filler. And, OnePlus, while advertising the AI Noise Cancelling for calls, fell right into the trap, which they could have easily avoided.

The battery life on the One Plus Nord Buds CE was sub-par. For ₹1,799 you can get the Oppo Enco Buds2, which have a much better battery life. In our test, we found that the Enco Buds2 lasted for 28 hours (with the charging case), while the Nord Buds CE (with the charging case) capped out at just 18 with some spare charge left in the case. The advertised battery life of these earbuds is 20 hours, which in itself is much shorter than that of the other earbuds in its class. 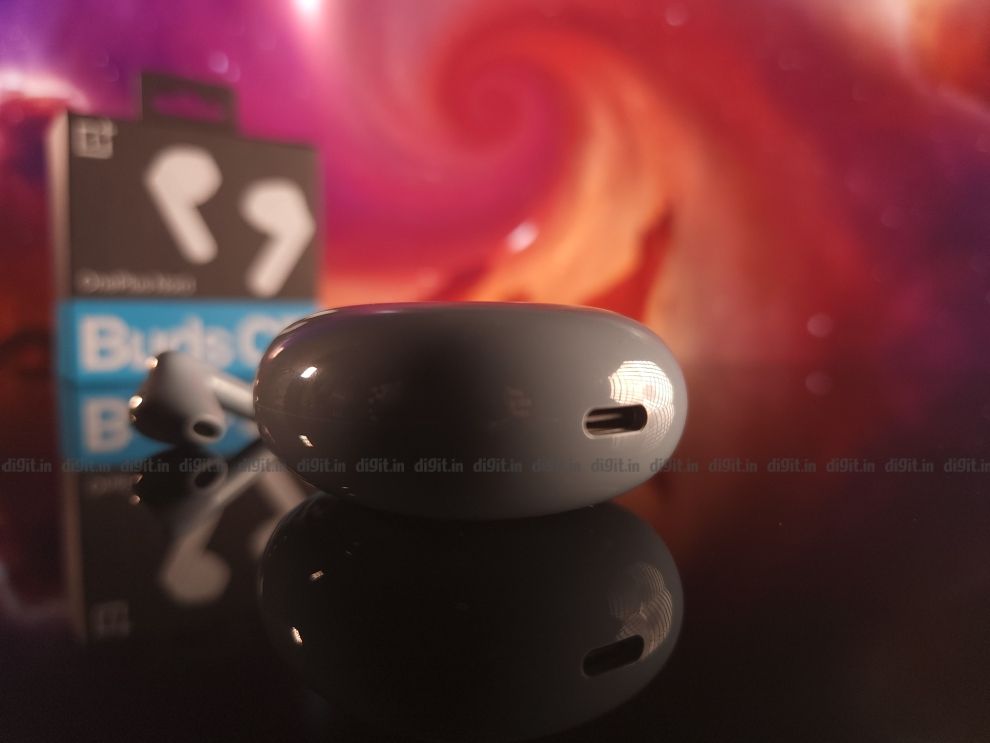 The buds themselves lasted for about 4 hours and 30 minutes in our battery test, where we placed them at 50 per cent volume levels. Considering the fact that these earbuds do not have ANC, we expected them to perform much better than they did. They lived up to the expectations set by the spec sheet, but we have seen buds that last much longer than these.

OnePlus also advertises fast charging on these earbuds, which as per their claims, provides 81 minutes of playback for a 10-minute charge via its USB-C charging port. 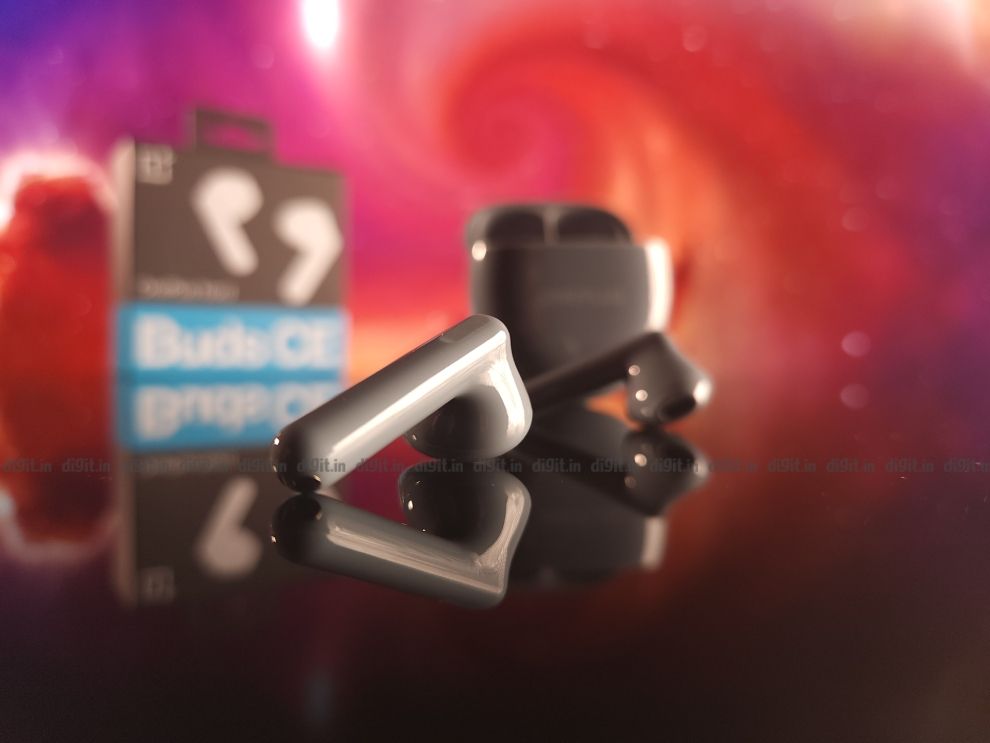 All things considered, the OnePlus Nord Buds CE is a decent buy if you are already a fan of the brand or are looking for a pair of earbuds that you can rely on for calls in the office or at home. Otherwise, there are a bunch of options available in the market that bring many more features to the table and would also have a decked-out spec sheet. The TWS earbuds that we would name the OnePlus Nord Buds CE alternative is the Oppo Enco Buds2 which is cheaper and brings along a decent sound signature with appreciable specs for the price.