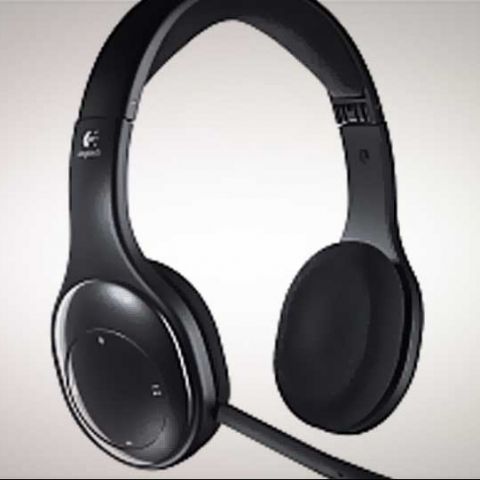 At Rs. 6,595 the Logitech Wireless Headset H800 fell expensive. Their build quality is sub par and the audio output is consistent. If wireless headphones are an absolute necessity, then you may want to consider these otherwise we suggest you pick up a nice pair of wired headphones, which will do more justice to your music needs.

Headphones is a very subjective category, especially if you decide to go wireless. Audiophiles will crib about the loss in audio quality, lag and distortion caused while moving around, and due to external interference. For the rest of us, wireless headphones are those that we wear without the fear of wire entanglement and the flexibility to move around a bit.

Today we have with us the Logitech Wireless Headset H800 that boasts of connectivity not only through Bluetooth, but a USB receiver as well. Does it pack a punch to replace your wired headphones? Well, read on...

Look and feel
First up, the device is very plastiky. The headband of the Logitech Wireless Headset H800 has a black matte finish to it whereas the outer side of the ear cups has a glossy finish, making it a fingerprint and scratch magnet. The inner side has the standard soft foam found on headphones. Attached to the right side is the microphone.

On the outside of the left ear cup you have the battery that is very well concealed. Logitech says that you shouldn’t open the battery pack unless you intend to replace the battery. The right side houses all the controls. On the outside, you have volume up and down buttons, mute, play and pause. The play/pause button also acts as the button to receive calls.

On the rear of the right side, you have the off, Bluetooth, dongle switch, next and previous track toggle and the micro USB port for charging. Overall the device isn’t stellar to look at nor it is the best build. The buttons feel flimsy but the overall fit feels comfortable.

The device can be charged via the bundled USB cable. The wire is long enough that the device can be used and charged simultaneously. The device can either be paired with your laptop, smartphone or iPod via Bluetooth or to the computer via the provided USB receiver.

Using the device with the USB receiver is as simple as plug and play, and pairing with Bluetooth devices is as simple as hitting pair. You can pair up to seven Bluetooth devices with the wireless headset. Once you pair the first device, simply initiate the pairing process with other devices. While the wireless headset can store up to seven devices, it will only connect to and stream audio from one device at a time.

If you need to reset the Bluetooth settings on the device, set the slider switch to the Bluetooth icon. Slide the track switch to "Next" and hold, and press and hold the "Volume up" button at the same time, until the link LED indicator blinks rapidly. Voila! Bluetooth of the device is reset. We used the device with our smartphone to make calls via Bluetooth. The audio at both ends was clear and the frequency was strong up to a distance of about 30-35 feet after which we started to face quite a bit of disturbance.

We connected to an iPod Touch via Bluetooth and to a Mac via the USB receiver. The difference in audio quality between the receiver and the Bluetooth will be negligible to most users. However, both modes of connection saw a bit of lag when using the headphones controls to increase/decrease the volume or change the tracks.

In terms of the audio quality from the device, you can get a pair of wired headphones for the same price but portability is the price you will pay for quality sound. The headphones don’t sound bad at all but they aren’t the best either. They lack bass and the overall output tends to screech a bit at high frequencies at high volumes. In terms of communication via Facebook video chat, FaceTime on a Mac or making calls through the smartphone, the audio was very clear. The only distortion came if we went beyond 30 feet (approx.) away from the device.

Our Take
At Rs. 6,595 the Logitech Wireless Headset H800 fell expensive. Their build quality is sub par and the audio output is consistent. If wireless headphones are an absolute necessity, then you may want to consider these otherwise we suggest you pick up a nice pair of wired headphones, which will do more justice to your music needs.