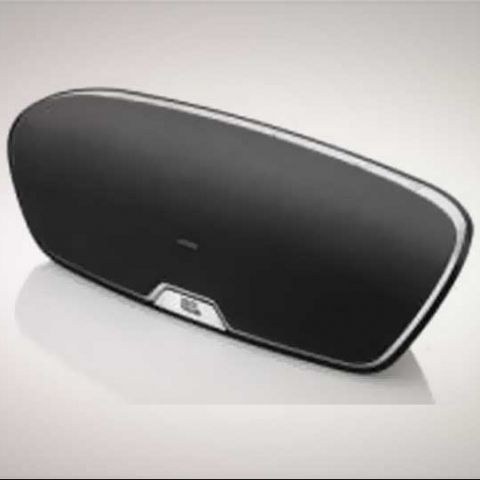 The OnBeat Venue flatters to deceive. We had huge hopes from this muscular looking dock. But the JBL sound in this case is surprisingly not the lifelike and wholesome one we have grown accustomed to. Good enough for a bedroom, with excellent clarity and adequate bass depth. But pump up the volume more than 50% and clarity gets compromised.

For anyone looking for the convenience of wirelessly hooking up the iPod to the speaker, the JBL OnBeat Venue is a rather solid option to consider. Particularly if you consider the current market price of around Rs 12,000.

Build & Design
JBL has always tested rather unique designs for its AV equipment, particularly the iPhone docks. The OnBeat Venue is like none before it, at least in the JBL stable. You can see there are stands of design inspirations from the B&W Zeppellin Air, but only just. It is rather hard to describe the shape of the system, but it does look fairly modern and minimalistic. There are a combination of colours and the finish varieties used here – glossy black, matte black, plastic with silver metallic finish and the dark grey fabric covering the speaker grille. Combined, they look classy, albeit a tad understated for our liking. If you are buying a system that has such a modern design, you would ideally want it to shout out a little more!

Usability wise, the JBL OnBeat Venue’s design just works. On the front is the spring-loaded dock for the iPhone, iPod and the iPad. The AUX-in 3.5mm jack is on the back panel. The top panel is where the keys are placed. On the left are the keys for bass boost, Cinema mode and the source. In the middle are three LEDs indicating which source is currently in operation. On the right are the power key and the volume keys. Except the volume and source key, all other ones have pale white LED backlighting when in use.

At 2.25kg, the JBL OnBeat Venue is a rather heavy package. Do remember that this one isn’t portable, in the sense that there is no battery backup for music playback, which makes this weight even more surprising. However, for the audio enthusiasts, heavy speakers are indicative of hunkered down solid performance.

Features & Specifications
The OnBeat Venue has no shortage of connectivity options. You have the snap out dock for the iOS devices. But do remember, this is not the Lightning port, and there is no clarity on the Lightning connector. The second option is the Bluetooth connectivity. We tried connecting the iPod Touch and the iPad to it, and the connectivity was seamless. The TruStream technology that JBL has implemented does make a bit of difference because at the same location, the JBL managed to hold the Bluetooth signal longer with the iPod Touch than all other speakers we have tested, including the Logitech Bluetooth adapter for docks that don’t have the Bluetooth facility built-in.

The biggest surprise is that the OnBeat Venue does not come with a remote control as a part of the box pack! This is a huge omission. JBL tries to compensate by offering the MusicBeat app for the iOS devices. However, you do get access to equalization settings that are not available on the device. Apart from that, the music app on the iOS device does just fine.

Performance
Like a lot of other premium audio brands out there, JBL does not specify the configuration of the hardware inside. The maximum they will share is “two full-range transducers”, but nothing beyond that. What we do know is that there are two tweeters as well.

We tested the JBL OnBeat Venue’s sound by playing various tracks spread across multiple genres, to see how this performs. Out of the box, with no equalizer or the sound tweaks activated, we like the clarity of the vocals and enough mid-range depth. Bass sounds a little too hard, but that can be accepted overall. Push up the volume above 50%, and this is when the limitations tend to show up. The bass sounds punchy, but definitely sound doctored. Clarity also goes down drastically as you go up the volume graph. This is very unlike JBL, but probably the form factor is having an impact on the overall performance.

The Bass button makes a bit of difference to the thump you get from the music. Press the Cinema button as well, and the vocals sound better across all audio tracks. The usual application of this would have been if you connect this to the TV while watching a movie. But we found it necessary to deploy this even for music playback on the JBL OnBeat Venue. Weirdly, both settings, when activated do not remain so when you switch it off and on.

Clearly, the JBL OnBeat Venue’s performance is good enough only for a small sized room, something like a bedroom. Any bigger, and you will have to increase the volume. And that will be an incomplete listening experience. The sound, even at the clearest of times on slower volumes does not sound real. For some reason, even lower priced docks tend to sound better most of the time. Take for example, the Yamaha PDX-31 that I happen to own. It is a basic dock with Bluetooth capabilities added on via the Logitech adapter, and no matter what the connectivity mode, the sound on that when playing the same songs is livelier than the OnBeat Venue.

Bottom Line
Rather disappointingly, the OnBeat Venue flatters to deceive. We had huge hopes from this muscular looking dock, with a lot of fancy sounding technology, and we had hoped that all this would make the Venue the most awesome iPod dock ever. But the JBL sound in this case is surprisingly not the lifelike and wholesome one we have grown accustomed to. It is good enough for a bedroom, with excellent clarity and adequate bass depth. But pump up the volume more than 50% and clarity gets compromised and the bass sounds clearly doctored. You would be better off buying the Yamaha PDX-31 for around Rs. 12,000 and getting the Logitech Bluetooth adapter with it, to get a similar package, but with much better sound.