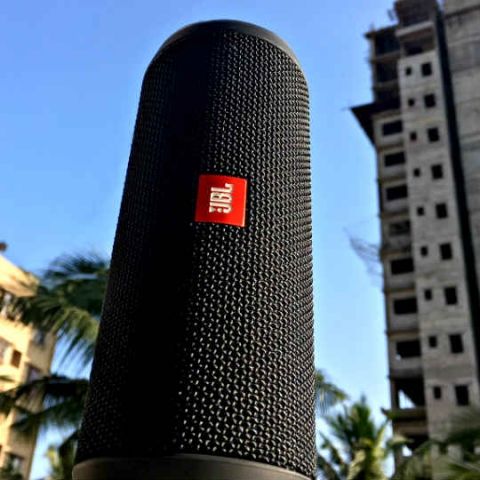 The JBL Flip 4 is a more mature product, offering better balanced sound than its predecessor, the Flip 3. However, its bass delivery is still a bit weak, and it is here that the UE Wonderboom plays better. Nevertheless, the JBL Flip 4 offers great clarity, and the sound signature is sweet and warm. If you like your audio to sound more neutral, the JBL Flip 4 will impress you more than the UE Wonderboom. It also offers aux connectivity, speakerphone and full waterproofing, and like the UE Boom 2, can pair up to a claimed 100 other Flip 4s simultaneously via a mobile app. At Rs. 8,599, it is fairly commendable, only playing second fiddle to UE Wonderboom by a margin on account of being a bit more expensive and lacking good bass.

Portable speakers have long become one of our most essential gadgets to own. Ever since speakers started including wireless connectivity and a compact form, notable audio companies have diversified into this space, and some of these speakers have even reached iconic status of late. Point in hand - the JBL Flip series.

Along with competitors like the Bose SoundLink Mini lineup, Creative’s Sound Blaster Roar series and the varying forms of Boom and Roll by Ultimate Ears, JBL has succeeded in earning a reputation of making one of the best portable speakers priced under Rs. 10,000. The latest rendition of its Flip lineup, the JBL Flip 4, is now in India, and is priced at Rs. 8,599. But, it is not an unprecedented offering any more. All of its competitors now provide alluring options, and over time, buyers have also become more discerning in terms of the audio product that they own.

With all of this in mind, does the JBL Flip 4 have what it takes to become one of the bestselling speakers in this hotly contested category?

Features and Specs
Looking at the set of specifications and the features on offer, I’m certainly inclined to think so. Here’s a run-down of the speaker’s specifications:

The JBL Flip 4’s box includes the speaker itself, a microUSB cable, a safety sheet, a quick start guide and a warranty card. The colourful microUSB cable provided is flattened and insulated, and is also reversible. However, you do not get a wall adapter, or an aux cable, even though the speaker supports wired playback.

In terms of features, the JBL Flip 4 provides:
IPX7-rated full waterproofing
12 hours of playtime with 3000mAh battery
Speakerphone for handsfree telephony
JBL Connect app support
Multi-device chaining mode with up to 100 speakers at one time
Integration with Google Assistant and Siri voice assistants

Audio
The JBL Flip 4 houses a new pair of drivers, and as far as memory helps, it does seem to sound better than the older Flip 3. The primary two elements for the Flip 4 sounding better is improved bass output, and louder overall sound. It uses a new bass radiator, which has made the bass sound cleaner and fuller. However, the audio balance is still far from perfect. The low frequencies are still much lower than what I would have personally preferred, and this adversely affects heavier tracks. So, if you’re listening to a Mr. Big song or a Red Hot Chili Peppers song, you’d be left a bit disappointed as the attenuated bass takes much of the fun out of the tracks. The JBL Flip 4 is bigger and heavier than before, and also sounds much better

That said, the lows do sound quite taut and cohesive, in tune with the rest of the frequency range reproduction. It sounds more neutral in comparison to the similarly priced Ultimate Ears Wonderboom, and that leads to a wide range of tracks sounding more natural. For instance, many of Pink Floyd’s 1970s work sounds well produced. The mids are clean and very well emphasised, and there is a characteristic sweetness that makes the JBL Flip 4 really enjoyable. The highs, too, retain the sweetness, and sound quite precise. They do not sound piercing or shrill, which makes fine hi-hat rolls bearable. 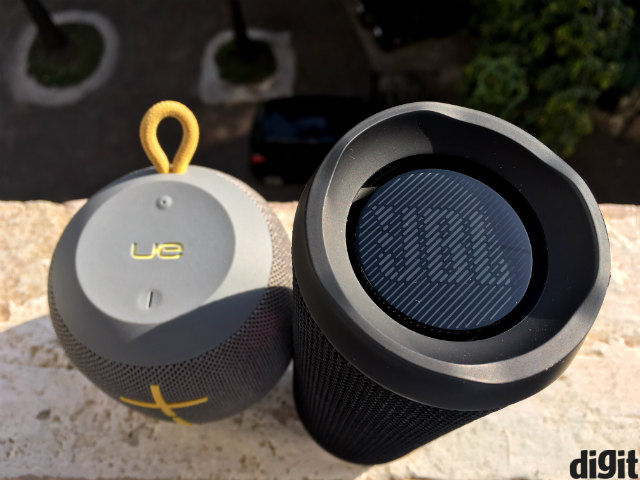 However, the UE Wonderboom does produce better audio balance in comparison to the JBL Flip 4. As we noted in our review, the UE Wonderboom actually produces exceptionally good bass for its price, and does not compromise on the mids and highs. Additionally, it too retains the sweetness in its sound signature, and both the Flip 4 and the Wonderboom have enough warmth and richness in audio to sound really good. On comparative terms, the Wonderboom would please more listeners of rock, funk and heavy metal, while many discerning EDM, metal, soft rock and other vocal-heavy genres would like the Flip 4 more.

With its circular design, the JBL Flip 4 produces good omnidirectional audio output. This remains in line with the latest trends of producing circular speakers, and that in turn helps you to not worry about how you place your speaker at a party. The JBL Flip 4 also sounds bright, and the loud volume levels are enough for a room as large as 450sq.ft. Impressively, the audio does not majorly distort at volume levels above 85 percent, and that is one area where it manages to outdo even the wonderfully clean-sounding Wonderboom.

Build and Design
The JBL Flip 4 is larger than the Flip 3, and at 515 grams, there is a nice heft to the speaker that does not make it feel heavy, and yet exudes a solid, sturdy confidence. With the new stitched fabric mesh wrapping it, the Flip 4 looks really premium and plush, and the added rubber cladding around its edges, housing the microUSB and aux port (and the power and app connect buttons) aids hand grip, and in placing it horizontally. 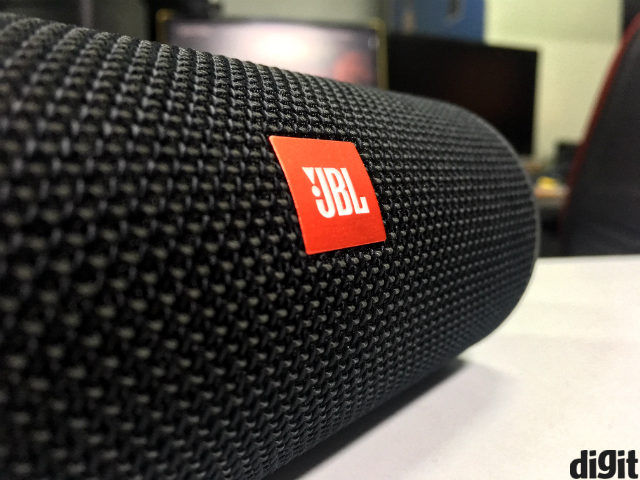 The good build quality is complemented by the subtle yet appealing design. While UE’s speakers have typically looked more youthful and chirpy, the JBL Flip 4 manages to keep up its youthful quotient with the neon orange JBL logo, the neon orange USB cable, a contrast-stitched detachable suspender and the chunky black buttons. The two bass outlets on either side of the cylinder now get a gloss finish on the exterior, which makes it look a bit younger than the Flip 3. Despite the lack of colour, the JBL Flip 4 still manages to look bright and fresh, and its sturdy build adds to it. The buttons too respond to presses with a satisfying ‘click’, and with the deeper ingress, provides much better feedback than its competing speakers. This, in turn, will allow you to adjust volume without even looking at it. The buttons offer very good feedback and are easy to operate

Speaking of sturdy, JBL has also improved the water resistance on the Flip, and the Flip 4 is now completely waterproof. With IPX7 rating, you can go swimming with it, accidentally drop it in a bucket of water and even shower with it, in case you hate living without music for even a few minutes. A rubber flap conceals the two ports, and the solid build makes you feel confident that you would not accidentally damage the speaker if you expose it to water.

Battery and Connectivity
With a 3000mAh battery, the JBL Flip 4 claims to provide up to 12 hours of battery life. In our test, the Flip 4 provided exactly 12 hours of music playback at 75 percent volume, and the amount of idle discharge appears to be nearly negligible. While this may be lesser than the UE Wonderboom, it is not a mean feat in any way, and is quite impressive. 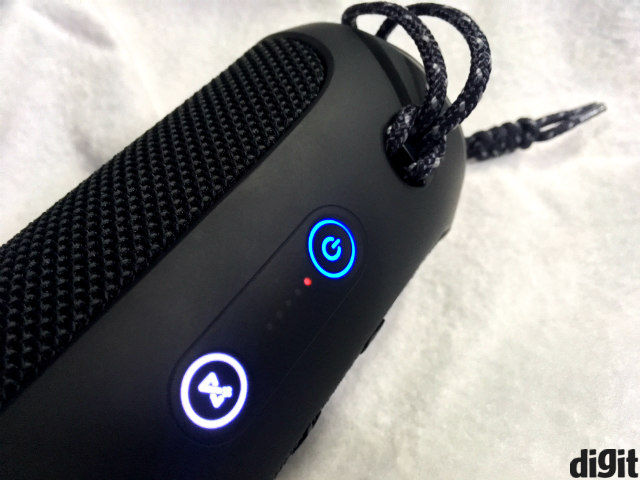 In terms of connectivity, while there appears to be no NFC patch, you get Bluetooth v4.2 and aux for playback, and microUSB for charging the speaker, which takes two hours and 45 minutes to reach 100 percent power. Pairing via Bluetooth is easy, facilitated by the multi-tasking power button. The LED backlight on the speaker’s power button glows blue when connected via Bluetooth, and white when no devices are connected. There are five tiny red LEDs beside the power button denoting battery status. Connection status is also prompted by a beep, which tells you when the speaker is connected to a device. 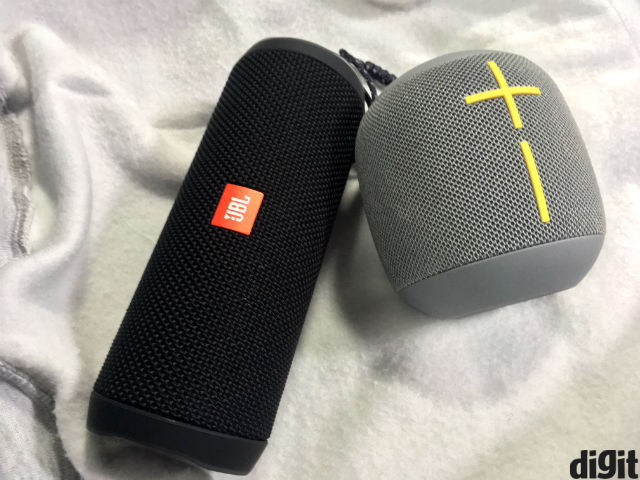 The JBL Flip 4 (left) and UE Wonderboom (right) are two of the best overall portable wireless speakers at under Rs. 10,000

The JBL Connect+ button allows seamless pairing between the smartphone app and multiple other Flip 4 speakers. Following up on UE’s pairing of over 100 speakers at one go, JBL has also added this feature to the Flip 4.

Chances are, however, still slim that you’d be buying so many Flip 4s, no matter how massive your home is.

Bottomline
JBL and UE appear to have a lot of similarities - quirky audio prompts denoting power and connectivity status, multi-speaker connectivity via mobile app, full waterproofing, flattened USB cables in neon shades. Unsurprisingly, the Flip 4 closely contests the Wonderboom at a similar price point. Two areas where it has the upper hand are the aux port and speakerphone, allowing wired playback and handsfree calling. However, the sound signature is marginally less impressive than the Wonderboom, and bass performance is notably inferior to the Wonderboom.

Many may still prefer a more neutral sound, for which the Flip 4 does sound quite good. If you are okay with the audibly low bass, the Flip 4 is a very able option to consider.