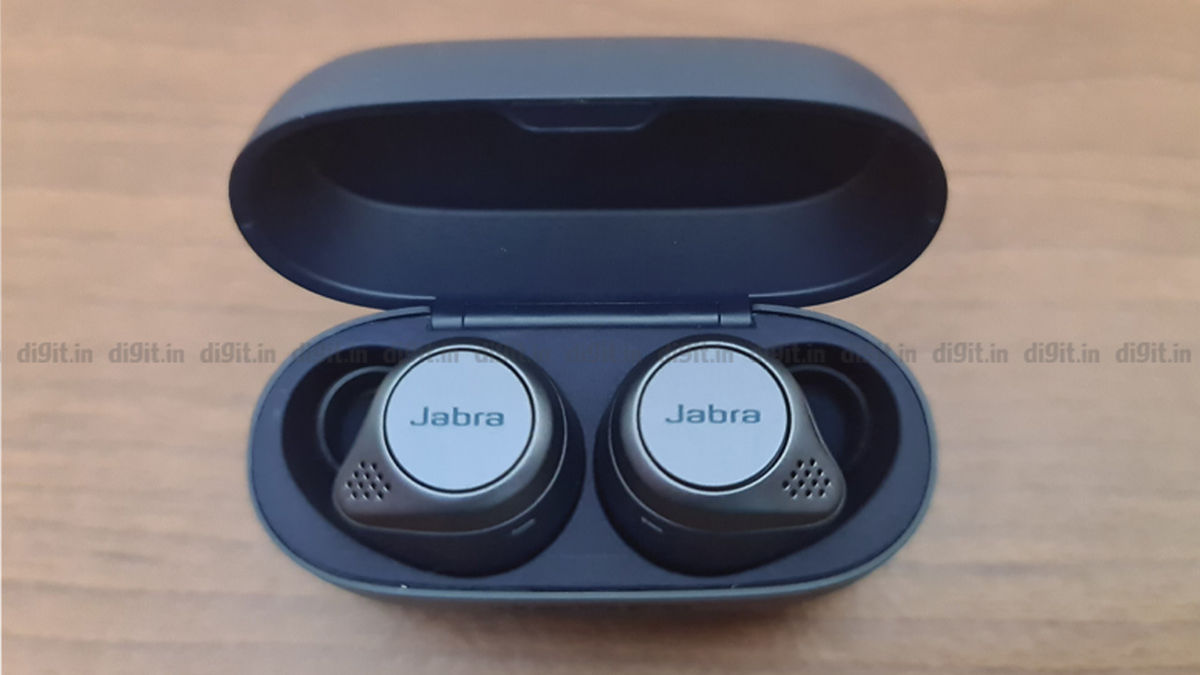 If you are scouring the market for a premium pair of true wireless earphones that cost significantly lesser than the likes of the AirPods Pro and the Sennheiser Momentum True Wireless 2, then the Jabra Elite Active 75t is a pretty good choice. The earphones have a fairly balanced sound profile with punchy bass and detailed highs, but you do miss out on features such as ANC and aptx support. For those with an active lifestyle, the earphones offer an IP57 dust and sweat resistant IP rating and a snug and comfortable fit. If you’re choosing between the original Jabra Elite 75t and the Active variant, it would make more sense to go for the Active variant since you get a higher IP rating and a 2-year warranty. 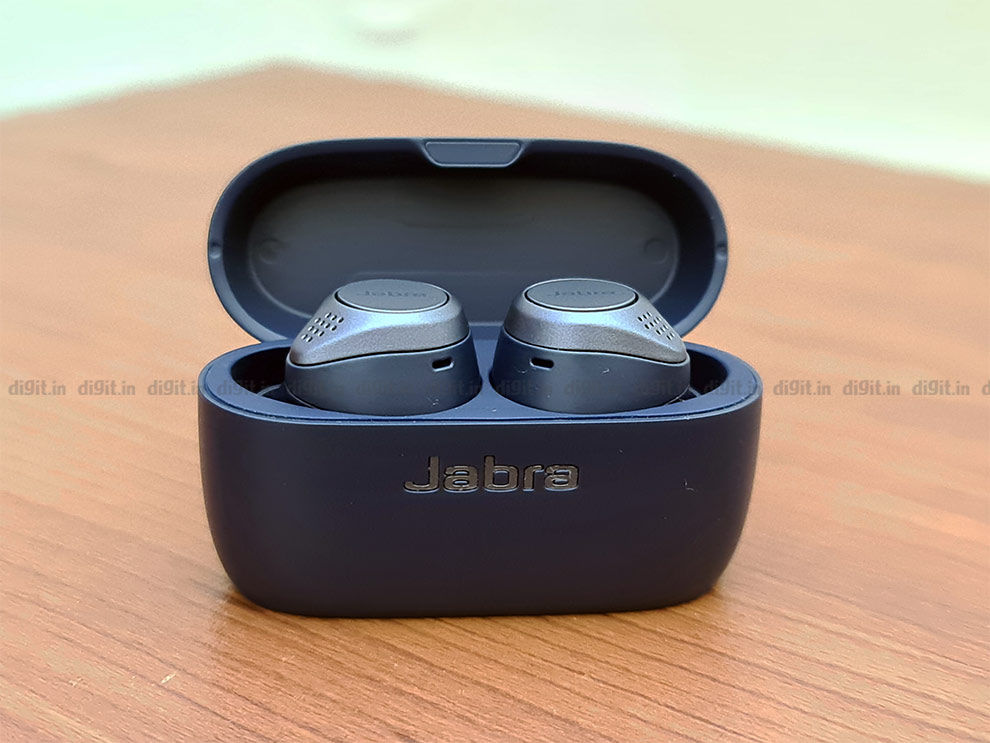 One difference between the Jabra Elite 75t and the ‘Active’ variant is the rubberised coating on the buds and the charging case which prevents accidental drops. The matte plastic build on the regular 75t was a bit slippery, so the rubberised texture is a welcome addition. However, due to the new and relatively improved texture, the case and earbuds do attract a lot more fingerprints and dust over time. Be prepared to wipe them clean every day or two. Still, the matte rubberised texture does feel a tad more premium than the original 75t. 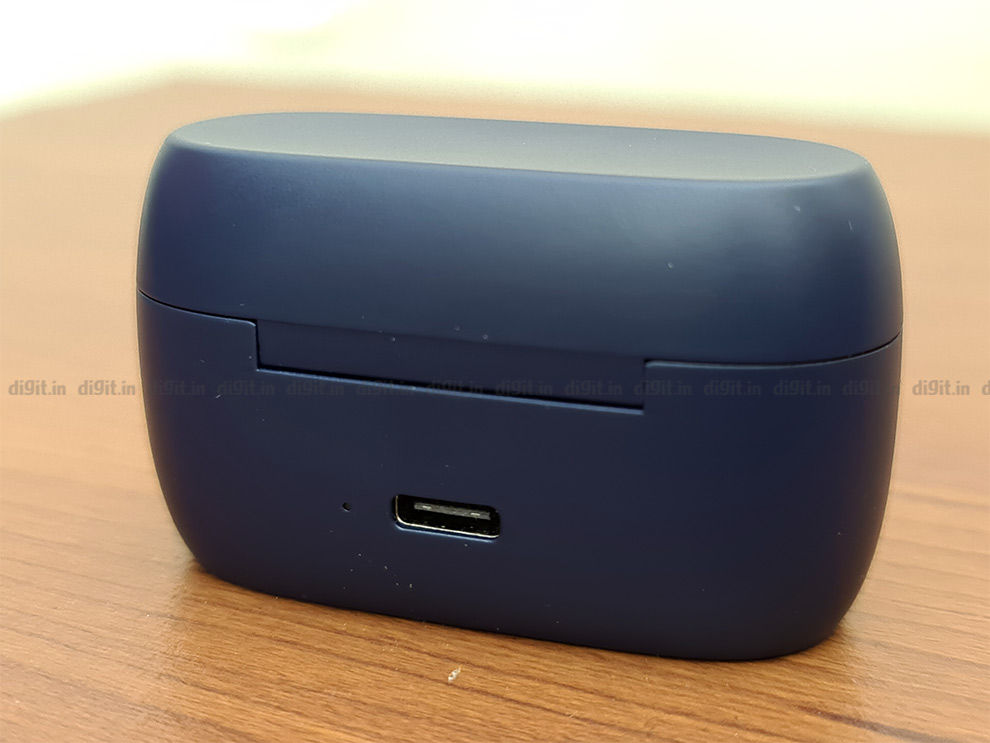 Featuring the same design as the Jabra Elite 75t, the Active 75t has a noticeably smaller footprint in comparison to the 65t models. The charging case is rectangular with rounded corners and slight divots on the top and bottom. The case can stand upright unlike the 65t models, which is a sizeable improvement, in our opinion. On the back, there’s a USB Type-C charging port and the front houses the understated Jabra logo. The magnets on the lid and within the charging case are quite strong and the earphones stay put in the case even if you drop it. 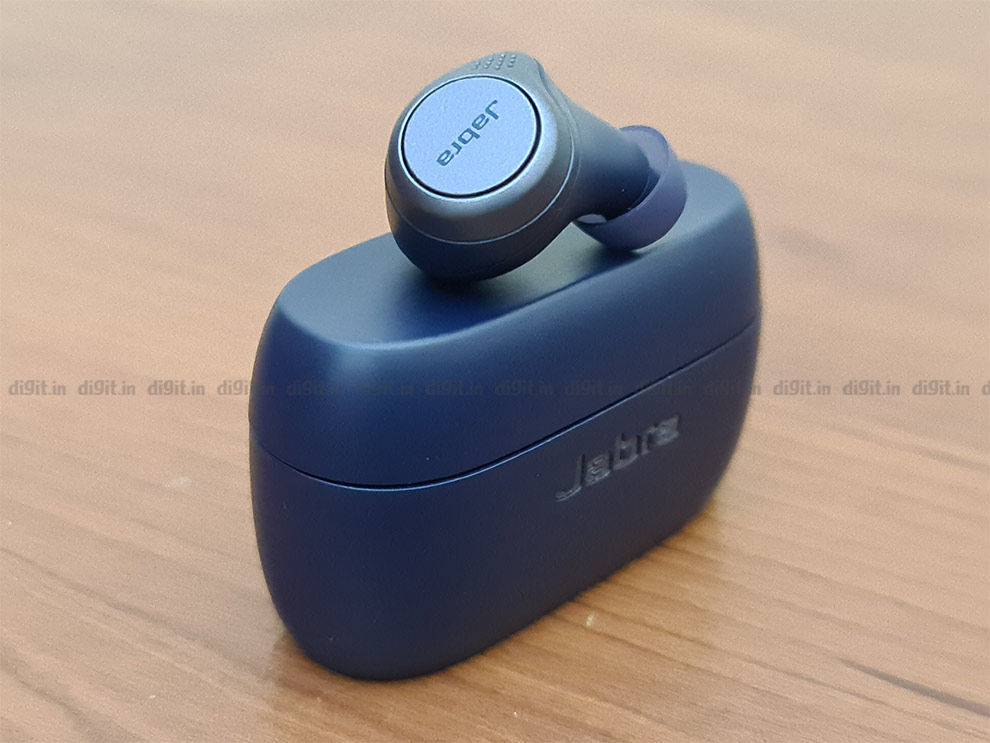 The earbuds are shrunk down considerably as well in comparison to the Elite 65t models and now sport a diminutive and unassuming form factor. They’re also significantly lighter in comparison to the older models. The angled nozzles aid comfort and fit, making it easy for users to wear these even over extended listening periods. Jabra also includes three sizes of silicone ear tips and getting the right fit is imperative in order to get good noise isolation. 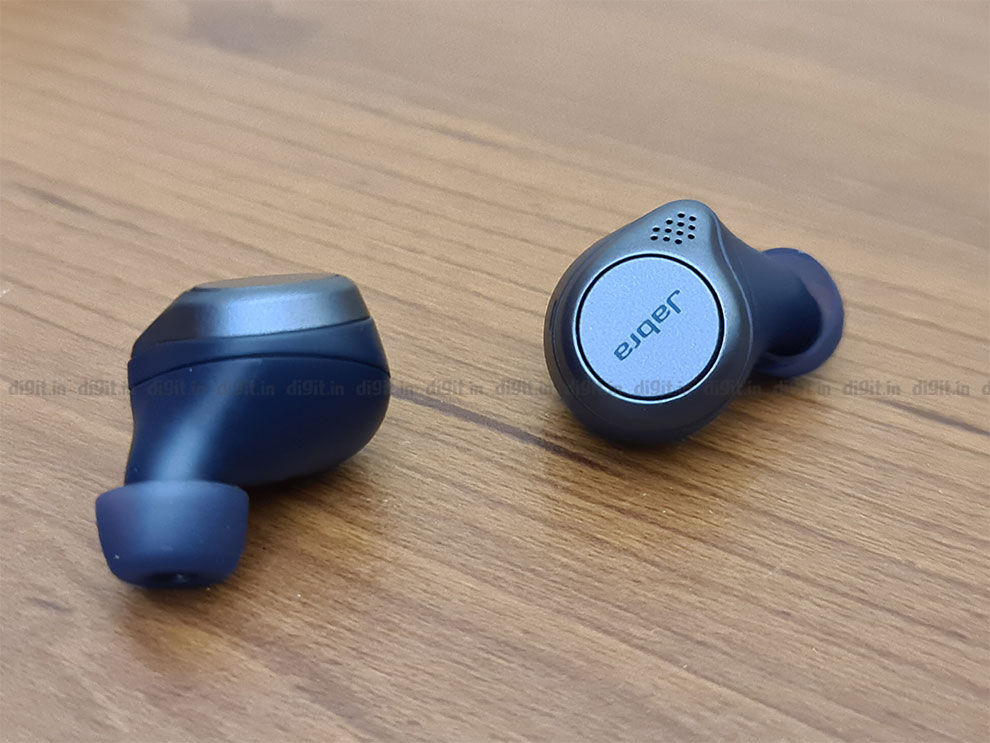 Each earbud also hosts a physical button, an LED indicator to relay battery information and microphone grilles. The physical buttons are extremely easy to push down and do not require much force. You don’t have to worry about the earphones digging into your ear when pushing the buttons since they require very minimal force to register. You can pause/play music, answer/decline calls, seek tracks, and even increase/decrease volume levels with the default controls. 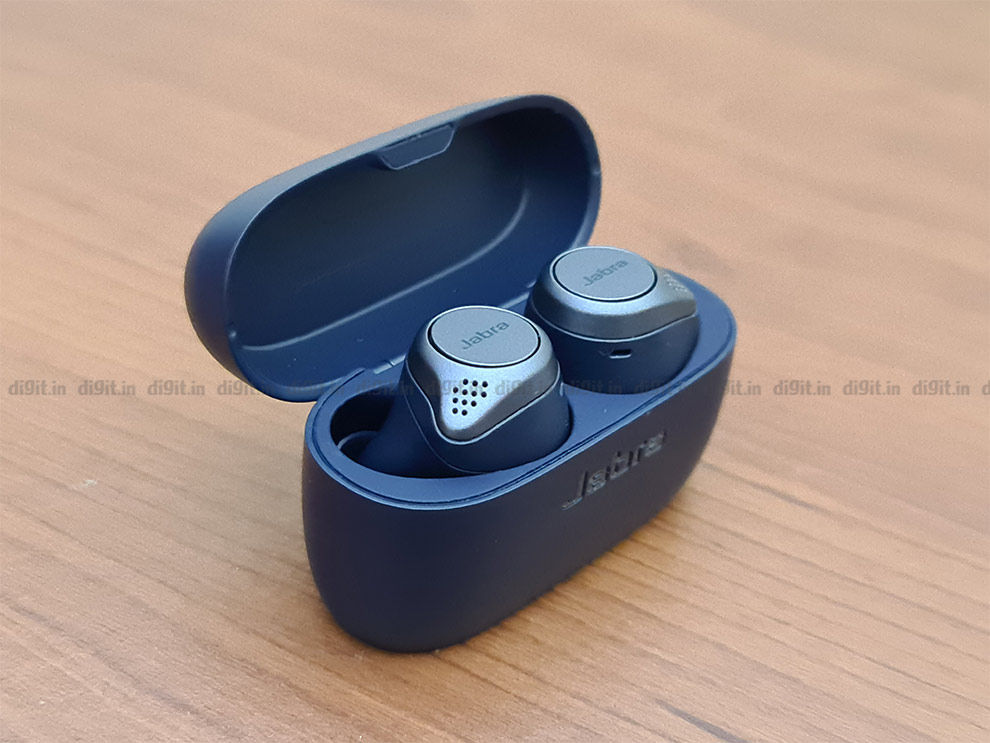 Additionally, the buttons are even customisable to your own preference via the accompanying Jabra Sound+ app. More on that later. We found the controls to be extremely responsive in our extensive testing, however, the volume control is a slow and imprecise process. You need to press and hold the left/right button to decrease/increase the volume and you cannot really precisely control the volume levels due to this. Additionally, the volume controls cannot be customised via the app as well, which is rather disappointing.

The Jabra Elite Active 75t is quite a feature-laden pair of true wireless earphones featuring IP57 dust and water resistance, HearThrough mode, customisable controls and EQ, auto pause and play, multipoint connection (can connect to two devices at the same time) and USB Type-C charging. However, some features that are missing, especially at this price point include Active Noise Cancellation (ANC), aptx support and touch controls. 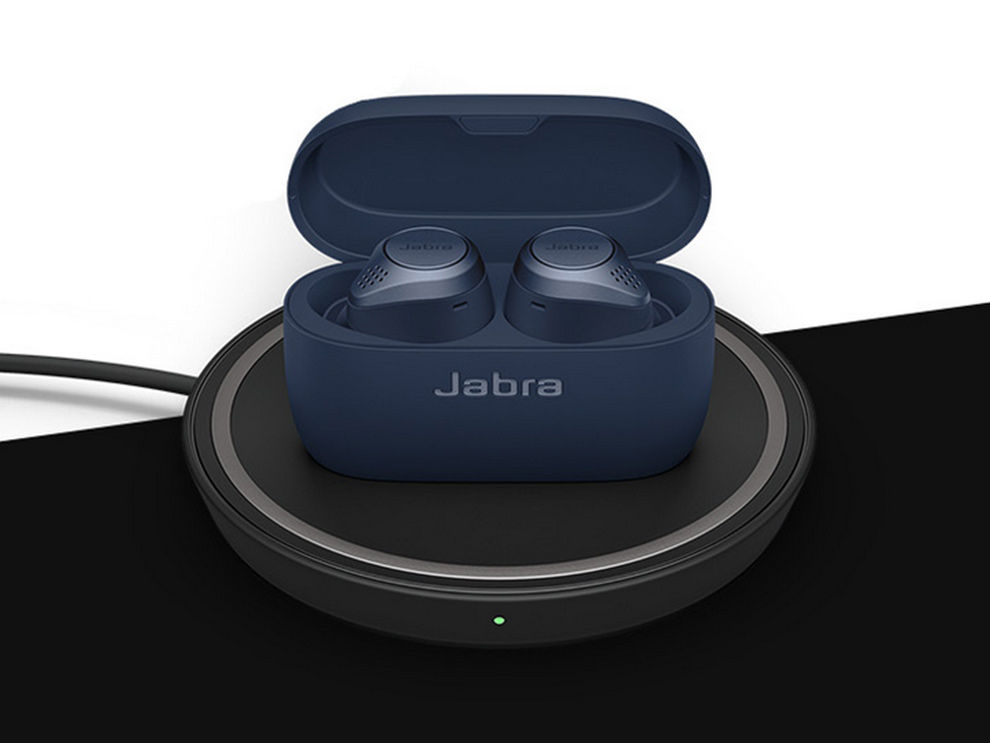 While we did not miss ANC (due to the superb isolation) and touch controls too much on these earphones, we were disappointed due to the lack of aptX HD sound support. Wireless charging for the case was missing on our review unit, however, the latest models of the Jabra Elite Active 75t will feature wireless charging. These units will be available on Amazon starting August 6 at Rs 16,999. Since we received a unit without wireless charging, we couldn’t test out the feature.

We found the auto pause and play and multipoint connection features also pretty nifty. The earphone features sensors inside the bud that determines if it has been removed from the user’s ear and put back in. Depending on this, media is automatically paused when the bud is removed and it automatically plays again when the buds are reinserted into the ear. Multipoint connection allows you to connect to two devices simultaneously. So, you can be connected to both your smartphone and laptop at the same time, and seamlessly switch between them as and when you need to. Both features worked as advertised, without any overbearing glitches.

While the earbuds do miss out on ANC, they come equipped with a rather proficient HearThrough Mode. This mode competes with the transparency mode on the Apple AirPods Pro and many other true wireless earphones from different brands. It’s safe to say that the HearThrough mode is as effective as the lauded transparency mode on the AirPods Pro. We had music playing at about 70 per cent volume and could still hear ambient sounds pretty well. 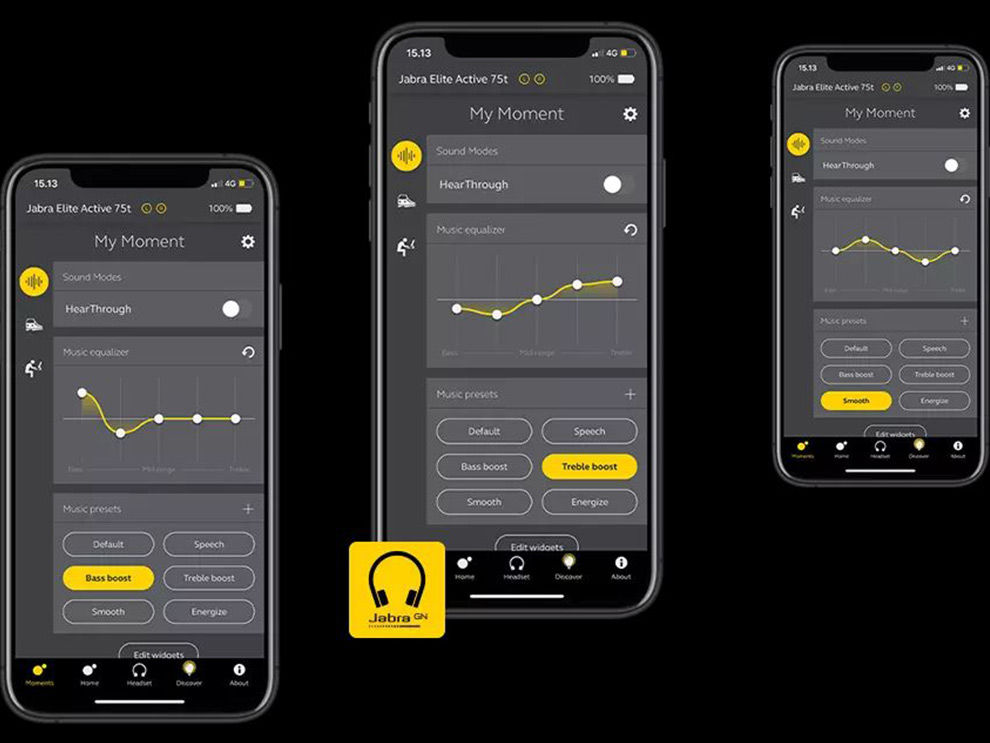 The earphones can also be paired to the Jabra Sound+ app which gives users access to a cornucopia of features and customisations. There’s an adjustable EQ, customisable HearThrough levels, several ‘Moments’ for different scenarios such as My Moment, Commute, and Focus, and an array of music presets. Another feature on the app is ‘Find My Jabra’ which basically lets you locate the earphones in case you have misplaced them.

You can also customise controls within the app for media, incoming calls and ongoing calls by changing around the command for certain actions such as pause/play, next/previous track, accepting/rejecting a call, and more. There’s also a My Sound feature that fine-tunes the earphone’s sound to your hearing abilities, which could be useful for users with hearing loss. It’s safe to say that the app adds a wide level of customisability to the earphones, to make it function as you’d like it to.

However, there was one area where we were sorely disappointed. The Jabra Elite Active 75t, much like the non-Active variant, can be used in Mono mode only through the right earphone. So, if you keep the left earbud inside the case, you’ll still be able to hear music/media through the right earphone and answer calls too, if needed. However, most earphones, especially in this price range, offer Mono mode through both earbuds.

Coming to the battery life, it has seen a noteworthy boost in comparison to the last generation products (the 65t models). The earphones themselves are rated at a whopping 7.5 hours while the charging case brings the total battery life to 28 hours. In our tests, at about 60-70 per cent volume, the earbuds lasted a cool 7 hours while the charging case topped the buds off three times over and still had some juice to spare. Impressive. 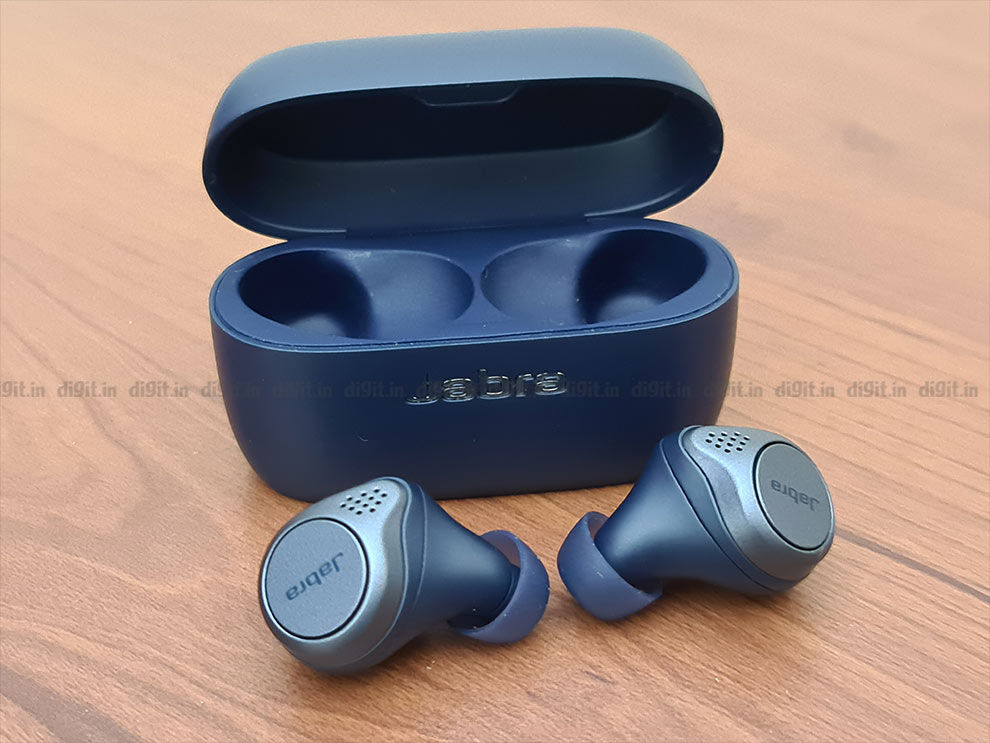 There’s also a Sleep mode which gets triggered after 15 minutes of no connection or 60 minutes of inactivity when connected. Like most things, this is also configurable via the Sound+ app. The earphones also come with Fast Charging abilities, where 15 minutes of charging time amounts to 60 minutes of playback. Additionally, the charging case, in our tests, was topped off from empty to full in about 2 and a half hours, which is pretty decent. These earbuds should easily last most users an entire day and if you are a heavy user, you can always make use of the Fast Charging to quickly recharge the buds, if needed. We were able to breeze through almost an entire week without having to charge the case.

The 6mm drivers inside the Jabra Elite Active 75t earphones produce a lively and dynamic sound that features punchy bass response, detailed mids and decent highs. The overall sound signature lacks a bit of warmth due to underextended high bass, but the low bass features plenty of power and results in a low-end accentuated sound. There is slight auditory masking in the mids due to the extended low bass. In Hysteria by Muse, the low drums definitely cloud the vocals, however, it is not very noticeable in most tracks and genres. 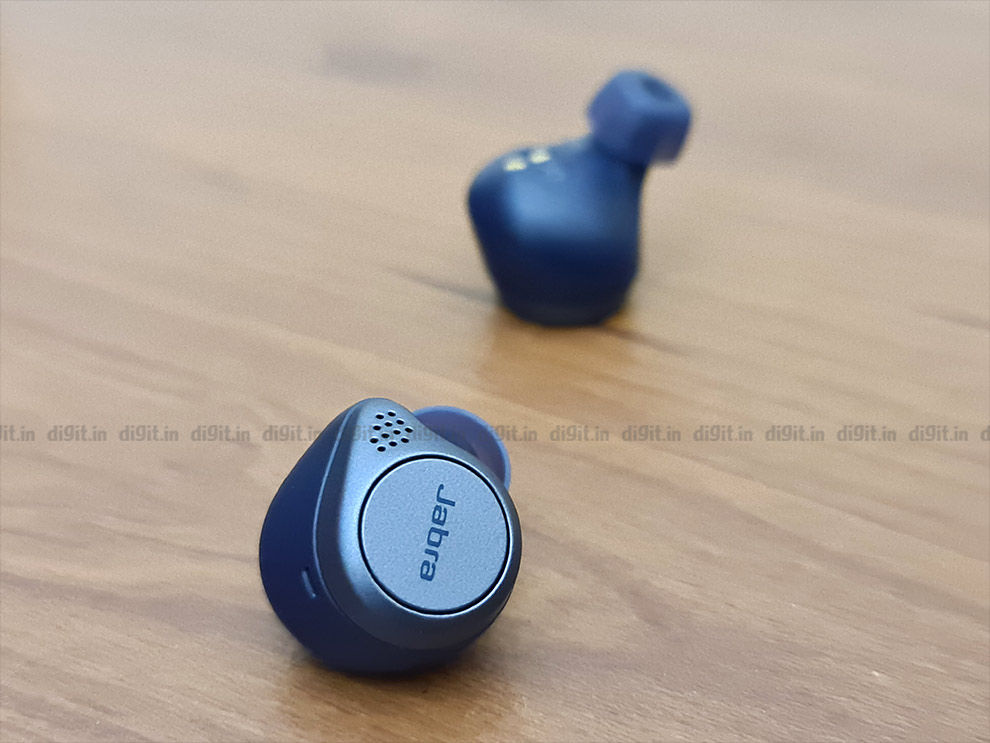 The highs, on the other hand, are not too far extended but they sound pretty detailed and balanced. They are usually not tinny or shrill, but at higher volumes (pushing past 80 per cent) you can hear some sibilance in female vocals. Soundstage, as expected from in-ears, is quite restricted still the imaging and instrument separation is excellent. In crowded tracks such as Selkies by Between the Buried and Me, each instrument is clearly rendered and there’s no discernible overlapping.

Microphone quality, as expected on Jabra products, is quite good. The earphones utilise a 4-microphone call technology which really does a good job at muting external sounds such as noise and wind. There were also minimal speech intelligentibility issues during calls and when recording notes using voice. While we did have some issues with wireless connectivity on the Jabra Elite 75t, where we faced occasional lags and skips in the audio. This issue was completely absent in the Elite Active 75t, which featured solid wireless connectivity and good range as well.

If you are scouring the market for a premium pair of true wireless earphones that cost significantly lesser than the likes of the AirPods Pro and the Sennheiser Momentum True Wireless 2, then the Jabra Elite Active 75t are a pretty good choice. They have a fairly well-balanced sound profile with punchy bass and detailed highs, but you do miss out on features such as ANC and aptx support. For those with an active lifestyle, the earphones offer an IP57 dust and sweat resistant IP rating and a snug and comfortable fit. If you’re choosing between the original Jabra Elite 75t and the Active variant, it would make more sense to go for the Active variant since you get a higher IP rating and a 2-year warranty.