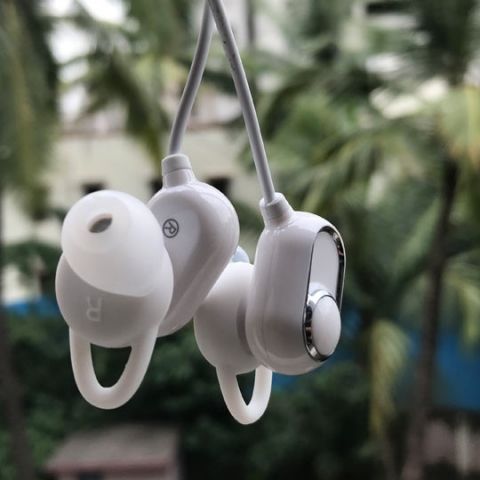 The FiiO FB1 doesn’t mislead anybody - it is built for the popular music of today. Considerably stronger in the lower frequencies of the audio spectrum, the quality considerably degrades as you proceed to brighter notes. The all-white, all-gloss body can be a subjective topic, but does feel fresh among its peers. With aptX and AAC support included at INR 3500, FiiO has a point to make with the FB1 - even at cheaper price points, FiiO isn’t looking to shortchange you with this one.

The recent spike in the number of Bluetooth IEMs in the market cannot be missed by anyone calling themselves audiophiles, or with a more than passable interest in audio products. As with every category, cheaper components are leading to more affordable products and seeing a number of companies jumping into the fray with their own offerings, often ending up with half-baked, poorly built wireless IEMs. However, FiiO is not a company known to build its products without quality in mind. The FiiO FB1 is a Bluetooth IEM at a price point that cannot be described as dirt cheap, and hence, sets itself up to a higher standard than the bargain bin products. However, does it satisfy those standards? 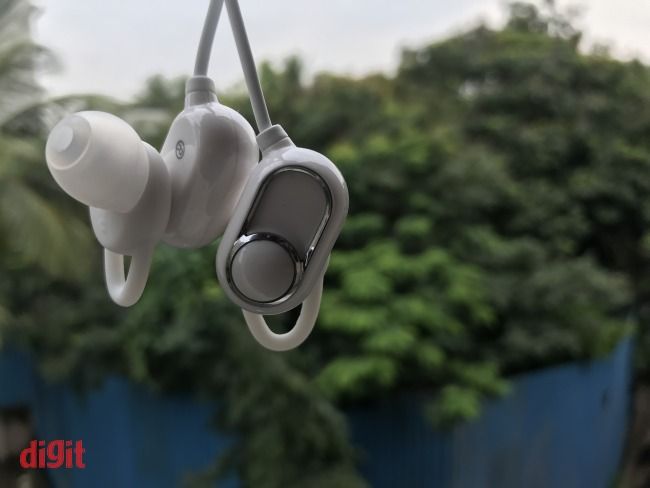 Reminds one of a certain high-end 'Phantom', doesn't it?

The white colour choice for the FB1 makes it look refined right out of the box. This feeling is enhanced with the metal highlights overall and the minimal buttons on the control unit. The earbuds have a glossy finish - which would usually mean a scratch-prone, stain-prone surface. However, according to FiiO, the FB1 has been coated by a nano-spray that makes it resistant to scratches and makes it easy to clean any stains on the body. In our experience, it does indeed satisfy both claims, laying rest to any concerns one might have with an all-white body. 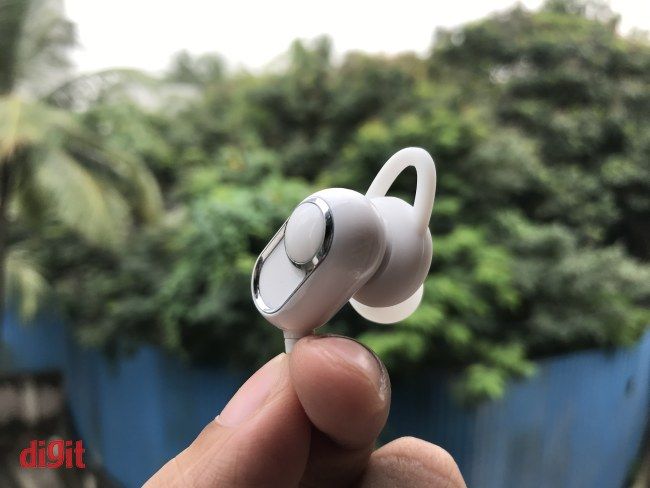 The all-white, glossy design might turn some people away

You get three pairs of silicone rubber earbuds and three pairs of white ear hooks to help you find a fit best suited to your ears. Having options for the ear hooks, even allowing you to use a hook-less option, is more than what we’ve seen most brands do at this price point and is something to appreciate. In a way, this customizability makes up for the lack of colour variants for this model. Additionally, the units are IPX4 rated so rest assured, they’re safe from a bit of sweat from active workouts. The cover for the charging port as well as the good seal offered by the earbuds also speaks volumes about the build quality.

On the control unit, you get three silicone rubber covered buttons and one LED indicator housed behind the same cover, which indicates charging, battery and pairing status. The LED also flashes blue if the headphones are being used, which can be irritating in dark environments. The FB1 comes with a carrying pouch which is cushioned all over and made out of good quality fabric. 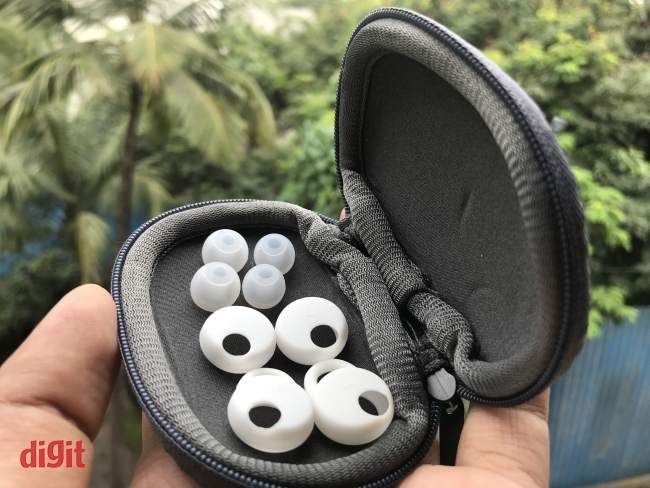 At 57cms, the connecting cord is long enough to be convenient without being bothersome. Using the right pair of ear hooks, along with the angled design of the FB1’s earpieces ensure that the IEMs don’t fall out even during vigorous workouts. On the other hand, it is hard to ignore the fact that the FB1 could have been more compact where its earpods are concerned. The protruding structure, along with the longer wire, can cause a couple of occasional snags in the gym.

Usually, when we get to the features section in the review of any sub-5k Bluetooth IEM, there’s not much to talk about. We even combined the features and performance section in some of our reviews for the same. The FiiO FB1 does not adhere to that trend and gives significant material to talk about through its features.

For starters, it supports the aptX, AAC and SBC audio codecs. So if you’re listening to ripped CDs from your iTunes collection you can expect faithful reproduction. The FB1 supports connectivity with two devices at the same time. In addition to that, there’s a host of controls available between the three buttons onboard that let you carry out a wide variety of actions. For instance, apart from the standard call controls you can switch the call between the phone and the FB1, mute the mic, multi-call control and call controls between the two phones. This means that you can put one call on hold and switch to the other, end the call on hold etc. This is beyond what most Bluetooth IEMs offer at this price point. 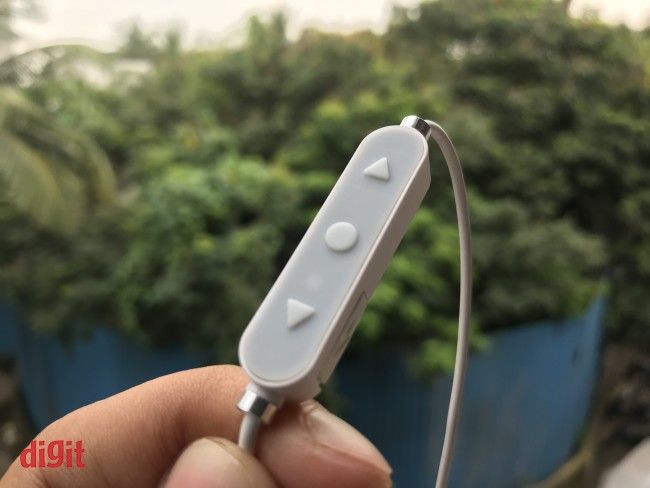 The silicone rubber coating on the control unit feels good

The FiiO FB1 packs in massive 13mm drivers. What that means for the end user is that these IEMs can get loud - really loud. Considering the price point, it doesn’t come as a surprise that these units aren’t exactly pristine in terms of audio quality. According to FiiO, they’ve been build with popular music of today in mind, hence, the lower frequencies are noticeably more prominent. While that is mostly a good thing, it is a drawback if your taste exceeds the boundaries expected by FiiO.

On fairly complex tracks like Pull Me Under by Dream Theater, the FiiO FB1 does uniquely well, considering its price point. While there’s a noticeable bias towards the lows and the lower mids. However, that doesn’t overpower the other areas of the audio spectrum as much as you would expect. The same degree of balance and separation is audible in tracks like Chris Rea’s Call on Me. Once again, while the bass in the track rumbles more powerfully than the rest of it, Rea’s vocals aren’t drowned out. However, keep in mind, that these are tracks that aren’t essentially heavy on the bass to begin with. So how does it perform on tracks that are more bass heavy? 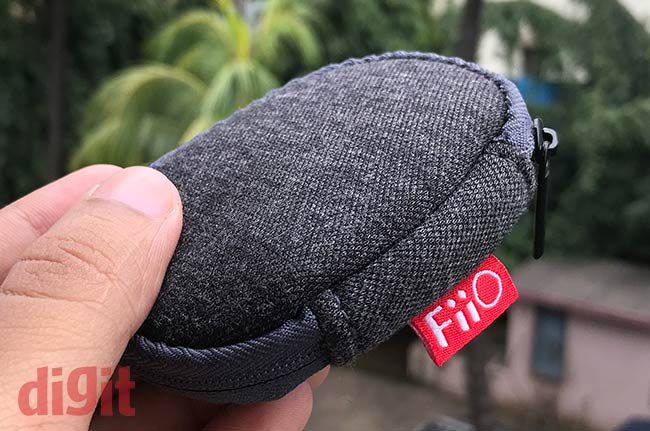 Not so well, to be honest. While more popular tracks like Uptown Funk by Bruno Mars sound quite peppy and energetic, without muddying the lower vocal loop in the background, on electronic tracks like Toulouse by Nicky Romero, you can hear a certain degree of booming and echoing that is characteristic of cheaply constructed IEMs sold on a budget. The FB1 disappoints in sound staging and detail as well, no surprises here. Hunter by Bjork sound quite limited and messy as compared to even slightly more expensive units like the Sony WI-500.

With all the power that comes with its 13mm driver, there’s another problem that the FB1 faces when pushed to its limits - treble peaking. Put on Centuries by Fall Out Boy or Selkies by BTBAM and you’ll notice a decent amount of harsh, piercing noise at the higher frequencies. Overall, the FB1 leaves no stones unturned in the audio department to make it clear that it is intended for bassheads. Others should look for something else.

The FiiO FB1 has been a highly subjective experience. For starters, its all-white, bulbous, glossy look could fit in with someone’s style and could completely repulse someone else. In terms of quality, the build is fairly good at the price point, especially with the silicon rubber cover on the control unit. It packs in aptX and AAC support, which already puts it significantly ahead of its competitors. In the audio department, the FB1 would be a delight for bassheads looking for Bluetooth IEMs that only fail when pushed to the extremes. On the other hand, the same IEM would definitely let more balanced audiophiles down. For them, a better alternative, albeit at a 2k higher price, would be the Sony WI-SP500.