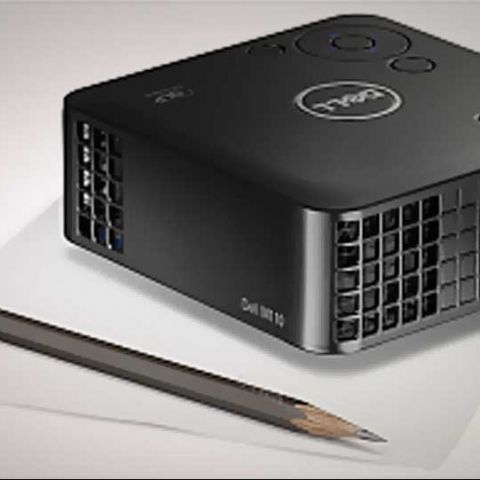 In the case of the Dell M110, it works well as a projector when connected to an HDMI source, but disappoints when you plug in a USB drive to it - jitters, video codec incompatibility and audio issues. Good video reproduction and a simple UI make it easy to set up and use. Utility will depend on how much you use you will make of the so-called USB playback capabilities on this device.

For those of you who prefer any portability aspect to a projector, a palmtop one would sound delightful, wouldn’t it? We tested the BenQ Joybee 2 recently, and the Dell M110 came just in time to let us compare the two of them. The results are interesting.

Design & Build
Very compact, in a nutshell! On the front is the lamp, obviously, accompanied by vents and a fan that is clearly visible from outside the grille. On the top is the control cluster – power, menu, direction keys and the return key. The focus set dial is towards the front of the panel. The keys, when lit up, have blue backlighting - very clearly visible, even when you may be operating this in a dark room. To the right side of this are two notification LEDs that will indicate any potential issue, if at all, with the projector, including overheating. No cover or cap for the lens, which is a bit of an issue. If you remember, even BenQ did not offer any cover for the lens with the Joybee GP2 projector. This needs to be rectified, considering the damage potential of carrying around this device without adequate protection for the most critical part.

If you look at the M110 front on, the left side doesn’t have any hardware keys on it, except a cooling vent. On the right side is a bigger vent, with another cooling fan. You can clearly see that there are a lot of cooling vents, and the M110 needs it badly, as we will explain later in the review. On the back is where all the connectivity options are – power, HDMI, USB, microSD and a tiny speaker.

This is the Dell M110 from the front.

The finish of the Dell M110 is completely black in colour, but thankfully it isn’t glossy. The enamel finish does the shine-back job of a glossy finish, but isn’t as needy in terms of maintenance. This one will still catch fingerprints though, be sure of that. This is a palmtop projector, and is built that way. The dimensions are perfect for what it is meant to be, and the weight of less than 400 grams means it can be carried around in a jacket pocket. Don’t forget to carry the power adapter, though!

Good build quality throughout. Feels like a premium device, with no rough edges at all. The only issue, if at all, could be the cramped layout of the ports, and we did feel that the power and the USB port are too close to each other, even more so when you are connecting a USB drive to it, that isn’t the world’s slimmest!

Dell do give a very classy carry case as a part of the package, and it can neatly pack in all the stuff – the projector, power cable, adapter, HDMI and AV cable etc.

Features & Specifications
The Dell M110 is a DLP projector with a native resolution of 1280 x 800 pixels. Dell says that the RGB (Red, Green and Blue) LEDs have a life of 20000 hours, essentially the life of the product. This is a solid contrast to the limited lamp life offered by most projectors, increasing the cost of ownership over time.

The M110 comes with a full-sized HDMI port, in contrast to the mini HDMI deployed by the BenQ in the Joybee GP2 (read our review). There is a microSD card slot in the M110, while the GP2 had a full SD card slot. Both devices have a USB port for direct media playback. The M110 also has 1GB internal memory, adding a bit more convenience to the entire portability aspect. You may not use this feature enough, considering you may be connecting it to other devices most of the time, but it is good to know that you have some more space available.

A closer view of the controls.

When playing back content, you can tweak picture settings quite a bit. You cannot, however, do that when there is no source connected – greyed out! Not that we mind though.

Performance
The Dell M110 has more brightness power, at least on paper – 300 ANSI lumens, against 200 ANSI lumens offered by the BenQ Joybee GP2. However, it didn’t really make too much difference, because in exactly the same setup with exactly the same content, both projectors looked to be reproducing similar results. We had no issues with the level of brightness with both projectors, but for these two devices, you really need to control the setup and environment to get the best performance. There should be no outside light sneaking into the room, because then the reproduction results will become severely washed out and faded. Remember, these aren’t full sized projectors, and are trying to manage with limited power!

Remember when we said this is a palmtop. This proves it!

We first tested the video quality by connecting the projector to an HDMI source – WD Live. Colour seemed even for the most part, on the standard setting. Take the setting up a notch towards vivid, and while it looks good for a while, the reds tends to become overbearing. Crispness seemed to be fine with HD content – 720p or 1080p. However, there will be a distinct lack of crispness with SD content. Just to make sure, we played back files from multiple containers – AVI and MP4, but content didn’t look very crisp, but there was a clear dollop of artifacts and noise visible at most times. The Dell M110 definitely had deeper blacks than what the BenQ Joybee GP2 offered, and we had pointed that out in the review as well. For the movie buffs, the details including shadows will be a lot richer with the M110.

For the second round of testing, we decided to plug in a USB drive and test the playback quality and capabilities. Straightaway, we had a problem. Unlike the Joybee GP2, the Dell M110 did not detect an NTFS drive. This was a huge disappointment considering the GP2 detected all hard drives we connected it to. We then connected a FAT32 USB drive, and voila, it instantly detected the drive and took exactly 4 seconds to list the files. Immediately, the interface opened up, dividing the files into Movies, Music and Pictures. We were very happy, that things seem to be in place, barring the blip of not reading NTFS drives. First, we selected a standard definition AVI file. The playback was very disappointing – constant stuttering, and everything seemed to be moving in slow motion. A second, third and fourth AVI file later, we seemed to have resigned to the fate. Just to give it another shot, we played back a bunch of MP4 files, and the results were even worse. The video was constantly breaking, like a bad satellite reception in a thunderstorm. Refused to detect any MKV files, so the question of playback doesn’t arise. Compared to the BenQ Joybee GP2, the M110’s shortcomings get magnified a bit. The GP2 detected all drives, and played back all the AVI and MP4 files we threw at it.

A view of the top panel - with the hardware keys.

The 1W speaker on the M110 isn’t worth anything anyone watching a movie on this would expect. You will need a dedicated set of speakers for this projector to work properly. The port marked A/V in also doubles up as audio output. The GP2’s speakers are quite good, in comparison, and will work well to an extent of personal viewing.

We noticed that when not in use in an AC environment, the M110 tends to heat up quite a bit. The two fans that cool down the device can become quite noisy. But then again, this was the same issue with the BenQ Joybee GP2 as well.

Bottomline
For a price very similar to the BenQ Joybee GP2, the Dell M110 does have some shortcomings that ensures that this appeals to a very limited demographic – the ultra-portable device fanatics. Video reproduction is very similar to the GP2, and the device is considerably smaller as well in size. However, it doesn’t fully offer the capabilities that a USB device could, something that the GP2 does with comfort. If you are in the market for a portable projector, we recommend you consider this, but only if you wont be using it for media playback off a USB drive. Else, consider the BenQ GP2, which also offers an iPhone / iPod dock as well!

There is no cover for the lens, which is a glaring omission.

The cleaner side of the M110, with just a cooling vent.
All the connectivity ports on the back - slightly cramped layout.